One of my favorite theater memories is of seeing Phil Silvers in “Do Re Mi” in 1960. In a scene where his character is producing a recording session, Silvers tells the six on-stage musicians how he wants the music played. One by one, he commandeered each instrument – sax, bass, drums, etc. – and played it himself. Finishing, Silvers turned to the audience: “You hang around, you learn,” he quipped.

Another is Jerry Lewis, who, as Applegate in the 1995 “Damn Yankees” revival, turned the “Two Lost Souls” duet into an extended night club routine (with a complicit Charlotte d’Amboise).

And now I have seen Billy Crystal in “Mr. Saturday Night.” 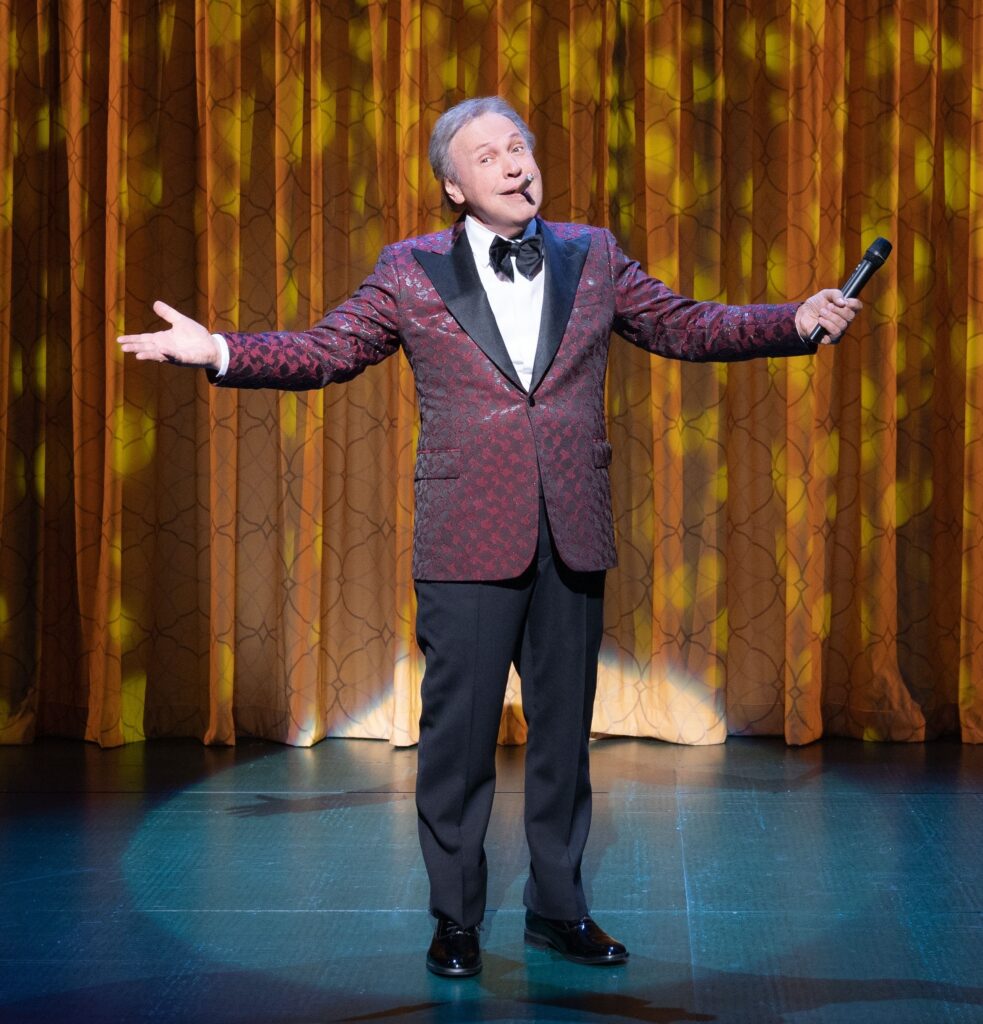 What you see is what you get: Billy Crystal [Production photos: Matthew Murphy]

Comic performers have long graced straight plays, some with great success: Bert Lahr appeared in many, including “Visit to a Small Planet,” which I saw in stock; and Robin Williams in the 2011 “Bengal Tiger…” comes to mind. (Both of those actors also appeared in “Waiting for Godot,” with Lahr the original Estragon.)  Chris Rock in “The Mother…with the Hat” is another example. But in book musicals, Silvers, Lewis and now Crystal stand apart for me. (Jimmy Durante’s “Jumbo” was before even my time.)

The “Mr. Saturday Night” musical is adapted from the 1992 non-musical movie. To say the show is better than the movie is hardly praise; the movie is an infamous stinker. Co-written (with Lowell Ganz and Babaloo Mandel) and directed by Crystal, the story is a downer, the pace plods, the acting is stiff. And strangely, considering Crystal’s co-authorship, the Mr. of the title is not just unlikable; he is thoroughly dislikable. (Critic Leonard Maltin’s understatement: “It’s tough to make an appealing movie about an unappealing character.”) 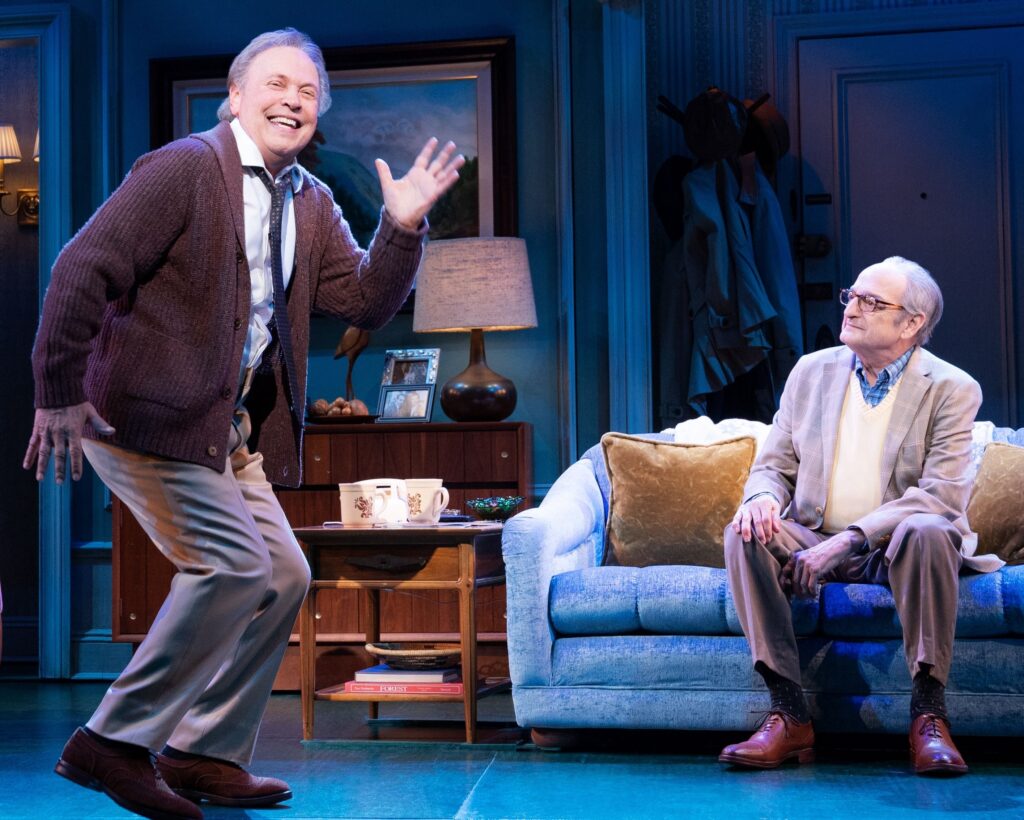 But lo and behold, what the passage of three decades hath wrought. With the same triumvirate’s book updated; a spritely musical score by Jason Robert Brown (music) and Amanda Green (lyrics); and with John Rando, director of a dozen City Center Encores! musicals, at the helm, those problems have been, for the most part, solved. The tone is buoyant, the pace is nippy, and the acting is warm and confident. 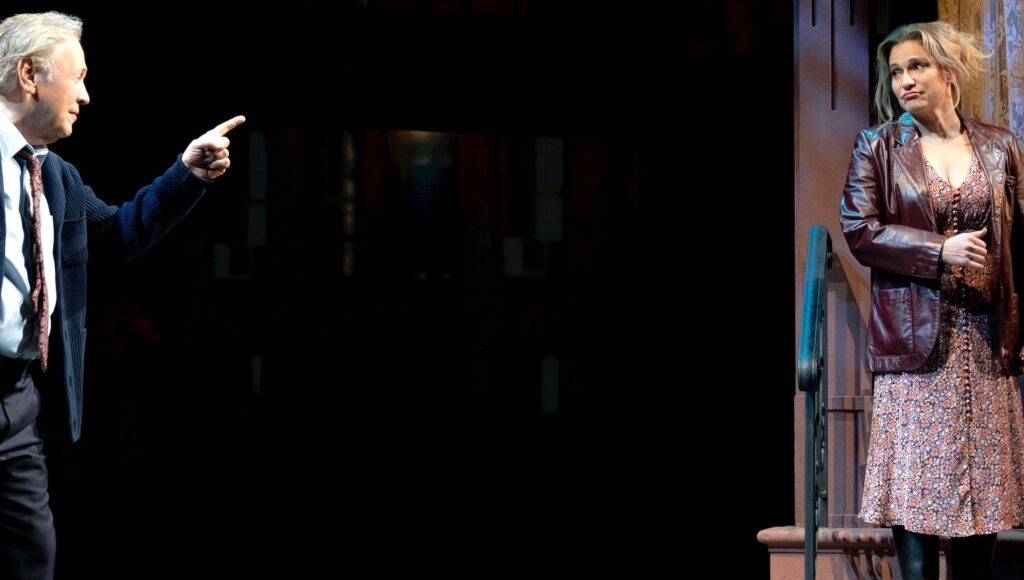 It is 1994. Buddy (Crystal), a former 1940s Catskills Resort tummler and 1950s TV star (a la Milton Berle), now reduced to playing gigs at senior centers, sees himself listed in the in-memoriam section of the Emmy Award telecast. Not quite dead – at least not literally – Buddy gets a guest spot on the Today show out of it, which leads to some nostalgic bookings and a potential return to the big time, which Buddy sabotages with his outsize ego, much as he had alienated his brother-cum manager (David Paymer, also reprising his movie role) and his troubled daughter Susan (Shoshana Bean, outstanding) over the years. Still the movie’s egotist, here, while hardly cuddly, Buddy is less of a megalomaniac. He still preempts his brother’s moves on the pretty pre-bride item at Table 8, for example, played by Randy Graff, who slides easily between Elaine’s ages, but he no longer makes Stan escort her backstage.

With the support of the constant Elaine and an uncommonly loyal talent agent (Chasten Harmon), Buddy slowly but surely mends his nasty ways en route to the upbeat ending the movie lacked. That reveal is hardly a spoiler; no ticket buyer wants to see Billy Crystal do a deep dive into a comic’s tragic downfall. (And they will see Billy or no show at all; his is the only role without an understudy.)

Most of the catchy musical numbers are geared to basically non-singer performers; Crystal carries his off in style (“A Little Joy” and “I Still Got It” titles are tip-offs), and Paymer’s “Broken” is more acted than sung…effectively. Daughter Susan’s “There’s a Chance” comes early in the first act, but it is Shoshana Bean’s eleven o’clock number for sure. The versatile backup trio of Jordan Gelber, Brian Gonzales and Mylinda Hull combine for about twenty roles, somehow making each one a distinct character. 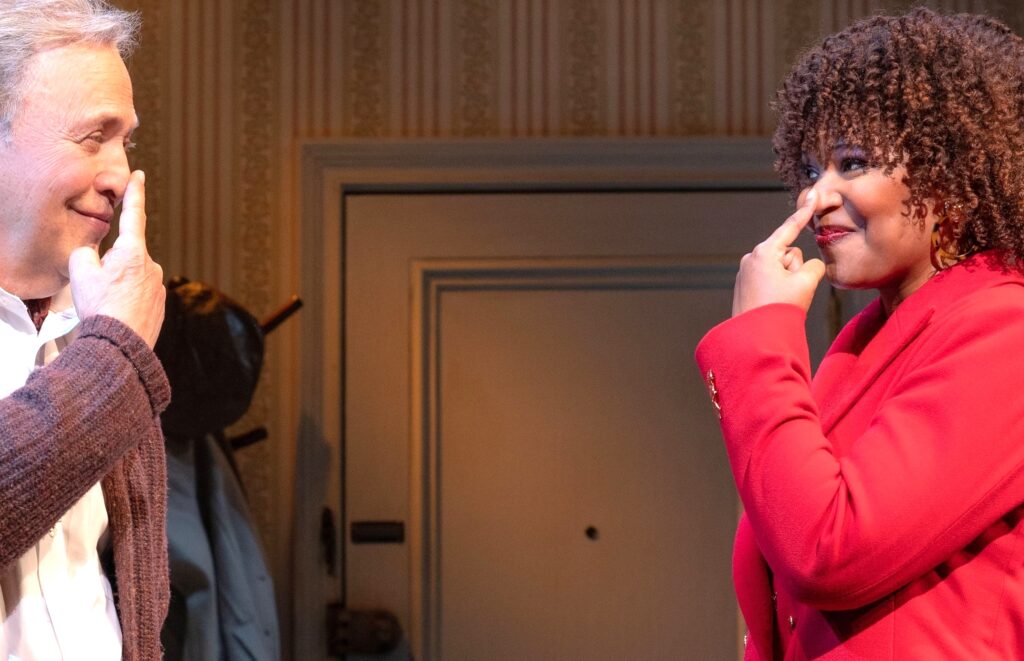 The thirty-year gap between film and stage has been kind to one of the movie’s major gaffes: In 1994 both Crystal and Paymer were in their forties, a bit old, granted, for the Catskills scenes, but way too young for the current scenes. Their pasty age-makeup became the subject of ridicule. Now, Crystal, at 74, and Paymer, 67, are right for the 1994 scenes, and, wisely, they affect no visible makeup or prosthetics to evoke the 1940s and ‘50s. Is it a perfect transition? Well, no, but the combination of a spring in the step, a raft of old routines that still work (or do not, intentionally), and our willing suspension of disbelief do the trick. Being of an age that well remembers that era’s shtick, I experienced a reverie. I suspect most boomers-on-up will as well. And to younger theatergoers: this is the way it was.