From 1968 to 1973, “SOUL!,” America’s first Black-hosted nighttime TV talk show, celebrated Black literature, poetry, music and politics, largely in interview formats. In 1971, prolific poet, activist and prominent figure of the 1960s Black Arts Movement Nikki Giovanni interviewed author and fellow-activist James Baldwin, whose debut novel “Go Tell It on the Mountain” and essay collection “Notes of a Native Son” are veritable Black history text references. (Baldwin, forty-six at the time, died in 1987; Giovanni, then twenty-eight, is still with us at seventy-eight.)

Vineyard Theatre’s “Lessons in Survival: 1971,” created with theater collective The Commissary and directed by Tyler Thomas, is a re-creation of that interview, edited somewhat for length and repetition. That it is a worthy compendium of both parties’ reflections on matters of race, gender, social justice and the roles of Black women and men in an ever-evolving society, is undeniable. That the 90-minute dialogue translates well into a staged reenactment is less clear. Having watched portions of the 1971 tape (on YouTube), and read much of a transcript and this script, I come down these fifty years later, on the side of the printed word, which is certainly not a condemnation of this worthy and engrossing theater piece. 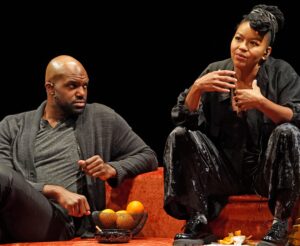 It is not that the material is arcane or that the performers are less than invested in it – they both are, deeply – but the written text invites pauses and re-readings to better absorb its significance. In performance, phrases, sentences, even paragraphs are necessarily fleeting. In more than one instance, the participants (original and here) acknowledge that: “…when the Holocaust comes, and it will come,” Baldwin cautions in an extended thought, “…when I’m needed, I’ll be there. Do you know what I mean?” he asks Nikki. “I don’t know if the people listenin’” she replies, gesturing to the (TV and theater) audience, “but I know what you mean.” As did I after a re-reading.

There are also examples of that phenomenon where you find yourself absorbing a possibly contrary opinion as if you had always agreed with it. Discussing the acceptance of Black achievements relative to those of whites, Baldwin posits a sly (and amusing) analogy: “Let us say I’m King Oliver and um I’m a pretty good musician. And somebody called, let us say, Bing Crosby, you know, who couldn’t carry a tune from here to there Right?” “Right,” Giovanni agrees, as Baldwin goes on to lament that “this little white boy” becomes a millionaire many times over and “I [Oliver] can’t even get my axe outta’ the pawn shop.” I don’t necessarily agree that Bing could not carry a tune, though my taste ran to Mel Torme and Joe Williams, but the illustration hits home, as if I always knew that Black-held opinion of Der Bingle. Giovanni is every bit as insightful as Baldwin, sometimes bitterly so: “you see the reason,” she says, “that people think it’s important to be white is they think it’s important not to be Black.”

While the piece is sprinkled with some humor, the interview was serious. Topics include the dissection of Black couples’ gender and sexual roles, child-raising, and employer-employee behaviors as descended from slave-master relationships.

It ain’t easy material, folks, but with these two accomplished actors in charge, it is a smooth go. Carl Clemons-Hopkins and Crystal Dickinson are a formidable pair; with no through-plot line to follow, their memorization alone is a staggering achievement. They don’t just play Baldwin and Giovanni; they inhabit them, approximating their physical appearance and carriage (Crystal actually resembles Nikki) and mastering their mannerisms and vocal tics. James Baldwin, in fact, repeatedly interjected “you know” into his responses, a habit the script retains. The show’s creators and director Thomas could have cut half of them without betraying Baldwin’s rhythms, you know?

And both Baldwin and Giovanni were incessant cigarette smokers, which is also replicated here. I lost count at ten between them, but even herbal, as the program notes, the constant lighting-up, stubbing out and ash-tray maneuvering is distracting.

Those nuisances noted, “Lessons in Survival: 1971” is a valuable addition to the theatrical library of Living History. With its often-disturbing observances of intra- as well as inter-racial relationships as perceived by two distinguished Black intellectuals in 1971, it is also a crystal-clear example of a vague aphorism: The more things change, the more they stay the same.