No Place To Go, at Two River Theater through November 4, is essentially a one-man show. While writer/performer Ethan Lipton is backed on stage by three talented musicians, the 90-minute quasi-musical odyssey about coping with job loss is singular to him, and therein lies its primary flaw. He is so specific in detailing his own predicament that a presumably intended universality is MIA. One must care about Lipton on a personal level to commiserate with his situation, and I, for one, don’t even know the man. (I suspect his whining would try even a friend’s patience.) 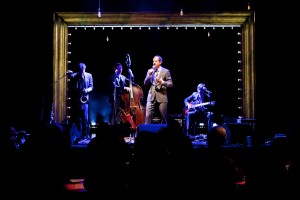 Sure, we’ve all lost jobs, and the outsourcing that Lipton relates and sings about isn’t uncommon, but the self-indulgent litany becomes real boring real quick. It’s not just that the subject matter is depressing, which it is, but in the telling, the dour performer casts a pall over the room. Not once in the 90 minutes does any one on stage crack a smile. Not once.

Lipton’s un-named “information processing” company announces it is re-locating (to Mars, he dubs the new location), leaving him without “a place to go in the morning” (cue a song). Moving with the company is an option, but Lipton, in a somber monologue, rejects that choice, choosing instead to stay behind to close-up shop and be like “the final sandwich in the conference room” (another song cue).

There’s plenty more content, if not variety. We hear a little about Lipton’s long-suffering wife Heather, a bit more about his co-worker Dave, and quite a bit about Mark, a Catholic “mensch from Brooklyn” (yet another) who died of some undisclosed illness. Mark seems like a good guy who died too young, but his connection to this story is tenuous at best.

The proceedings alternate between spoken and sung narration. Lipton wrote the words, including the prosaic lyrics, and co-wrote the music, which is salvaged by the nifty little band: Vito Dieterle on saxophone, Eben Levy on guitar (and electronic sideman); and Ian M. Riggs, upright bass and acoustic guitar. (Lipton’s attempt to be ‘down’ with the band, including a stab at rap, is ludicrous.)

It’s all overseen by director Leigh Silverman, whose laudable credits on and off Broadway far outweigh this lapse in judgment.

Two River’s flexible Huber black-box space is cleverly configured into a cabaret with tables that seat four (barely) with a pre-show cash-menu that features sandwiches (ours were pretty good) and a couple of apparently zapped entrees.

With the dining amenity in mind, a mid-show song is totally inappropriate. That song’s title and repeatedly enunciated phrase is, no lie, “Shit Storm.” The temptation to elaborate from there on No Place To Go is barely resistible.