Romeo and…Bernadette? Why Not; What’s In a Name?

There are many reasons for taking a date to a community theater production of Shakespeare’s “Romeo and Juliet.” Maybe you are both studying English Lit or are enrolled in acting classes. Maybe a friend is playing Mercutio or has constructed the costumes. Or maybe, as Brooklyn Guy sings in “Romeo & Bernadette,” you got a date with a college girl, and you’ve heard that “culture gets them hot.”  “Romeo & Bernadette” may or may not be an aphrodisiac (to each their own), but it is one of the most delightful pocket musicals in memory.

Sub-titled “A Musical Tale of Verona & Brooklyn,” the inventive show has re-opened off-Broadway after its acclaimed January 2020 premiere and a two-year Covid pause. Freshened up a bit and with the original cast intact, this entry in the Shakespeare-riff genre is a funny, romantic blend of high Elizabethan and low Sopranos/Godfather references. It is a compact, two-hour treat from curtain to curtain. 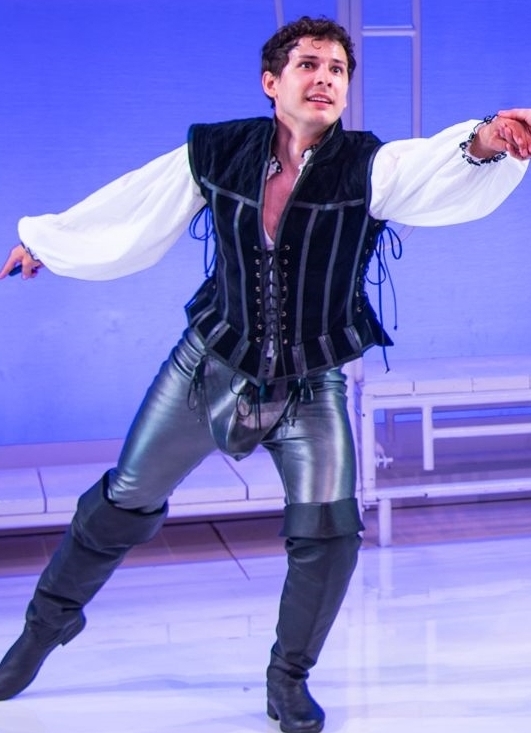 Marc Saltzman’s book is cleverly constructed (but not overly so):  The final scene of the Brooklyn Community Players “R & J” is winding down before an audience that includes Brooklyn Guy (Michael Notardonato) and Brooklyn Girl (Ari Raskin). To sooth B Girl’s emotional distress over the fate of the star-crossed lovers, B Guy constructs an alternate ending that ends up with Romeo (Nikita Burshteyn) pursuing his Juliet (Anna Kostakis) in 1960s Brooklyn. (Just go with it.) 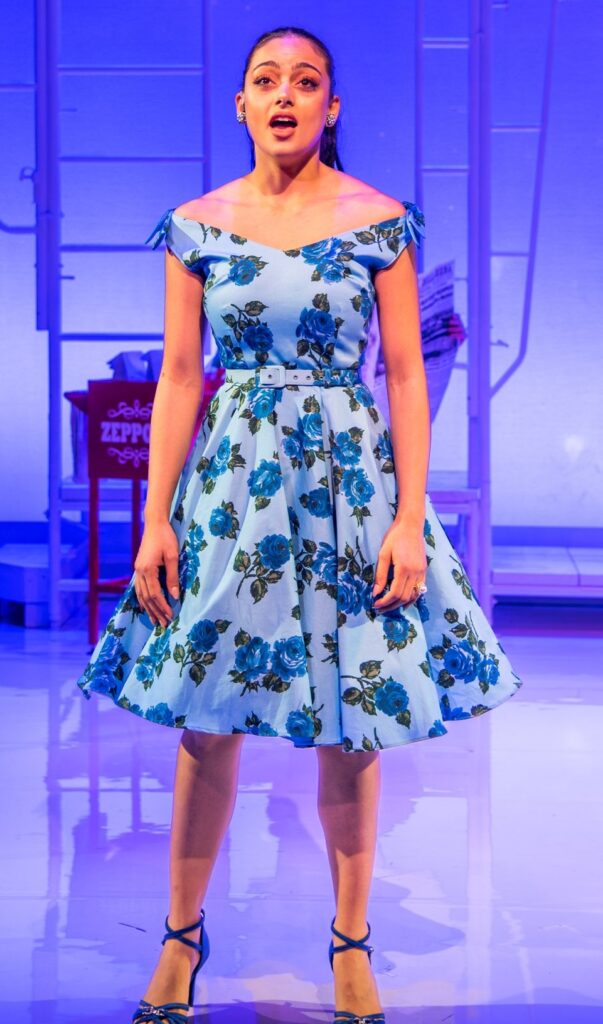 Romeo sees Juliet’s image in mob-boss daughter Bernadette (Ms. Kostakis, of course), who is engaged to Tito (Zach Schanne), whose “I said now!” to his dawdling fiancée does not endear him to anyone in hearing range.

When Romeo is ‘adopted’ by a rival mob boss after coming to the aid of his son Dino (Notardonato, erstwhile Brooklyn Guy), the parallel between the warring mob families and the Montague/Capulet families is complete. The ensuing conflict between the feuding families and the seemingly mismatched young couples is as old as, well, The Bard, but it is so deftly written, directed, acted and sung that it seems newly invented. 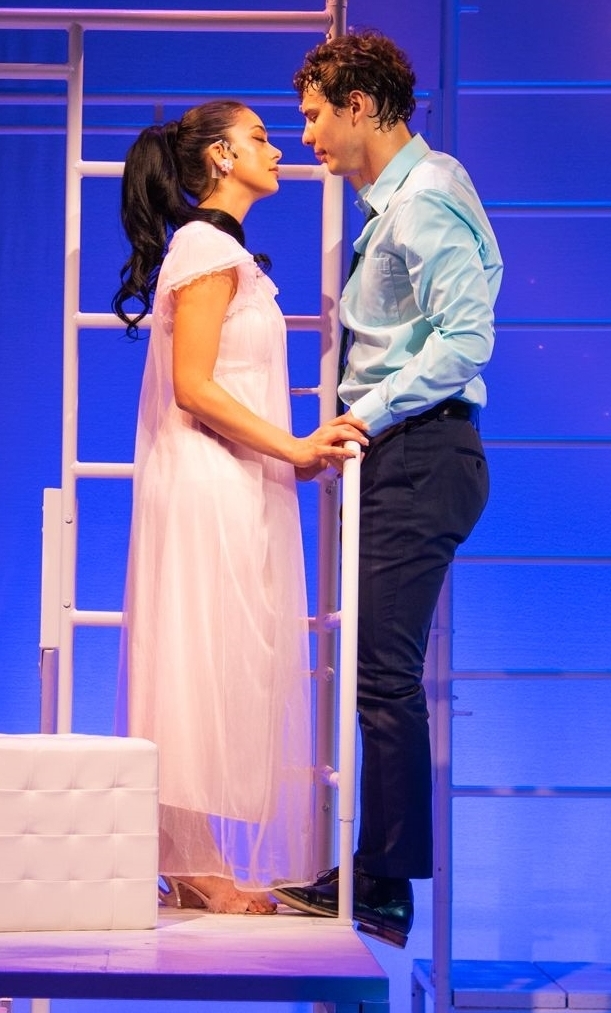 Saltzman’s adroit lyrics complement the twenty musical numbers so well that it takes a while to realize that he added those lyrics to ‘classic Italian melodies’ from a hundred or more years ago. (Not a spoiler; it’s more fun if you know upfront.) Nineteenth Century composers Rossini and Leoncavallo are among the contributors, and Steve Orich’s arrangements and Aaron Gandy’s modest, four-piece orchestra are more than up to the task. It is a rich, authentic sound.

Briskly directed and choreographed by Justin Ross Cohen, the show’s frequent, amusing nods to the 400-year time span hit their marks, as in Dino to Romeo: “…somethin’ I wish you’d change.” “What mean’st thou?” “I mean’st THAT.”

“Romeo & Bernadette” is ideally cast. Burshteyn and Kostakis, both in off-Broadway debut roles, are an engaging couple, sparring in separate jargons with a hint of the universal language they end up sharing. (Again, no spoiler; if you doubt from the start that they will couple-up, The Scottish Play is just a few blocks away.)

“When He Looked at Me That Way” From left, Ari Raskin, Michael Notardonato, Nikita Burshteyn, Anna Kosakis

Notardonato and Raskin, who reappears as Bernadette’s bestie, are equally at home with romantic sparks and comic takes. The couples’ quartet, “When He Looked at Me That Way,” set to a Bellini melody, is terrific. As the opposing mob bosses, Carlos Lopez and Michael Marotta embrace the stereotypes without crossing into caricature; both are legit singers as well, which serves the vintage score well. Musical-theater treasure Judy McLane captures perfectly the look and personality of a famiglia wife and mother. (McLane is also stunning in several of designer Joseph Shrope’s outfits, as is Kostakis in colorful 1960s styles and in bridal white.) Zach Schanne makes Bernadette’s bummer fiancé thoroughly unlikable, and Viet Vo is appropriately menacing as a lurking bodyguard-cum enforcer. 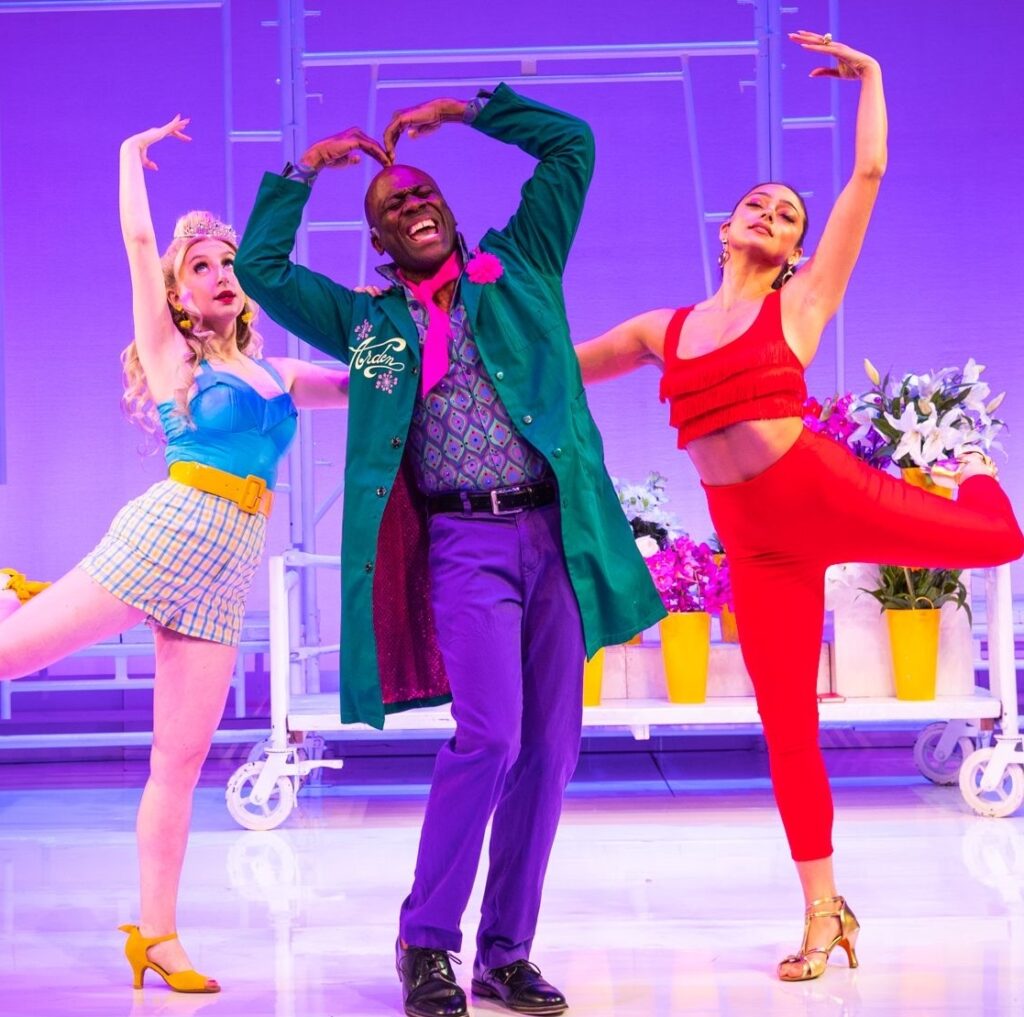 Troy Valjean Rucker as The Florist of Arden with Ari Raskin, left, and Anna Kostakis

The mix of Elizabethan and Brooklynese in Saltzman’s book is great fun. To Romeo’s declaration “Thy memory forsakes thee…thou art my Juliet,” Bernadette replies “You score this way?”  “I am not Juliet,” she insists. “What I gotta’ do, paint you a fresco?”  And there are musical pleasures aplenty, from liberally distributed solos and duets up to the “Bernadette Sextet” that ends the first act, and which put me in mind of the “Tonight Quintet” of “West Side Story.” Well sung and minimally choreographed on Walt Spangler’s serviceable scaffolding set, they all advance the plot.

At the end of the Shakespeare source play, we are told that “…never was a story of more woe/Than this of Juliet and her Romeo.” Of Saltzman’s update, it has been written that “…with a long-lasting smile you will not forget/This tale of Romeo and his Bernadette.” (Anon)