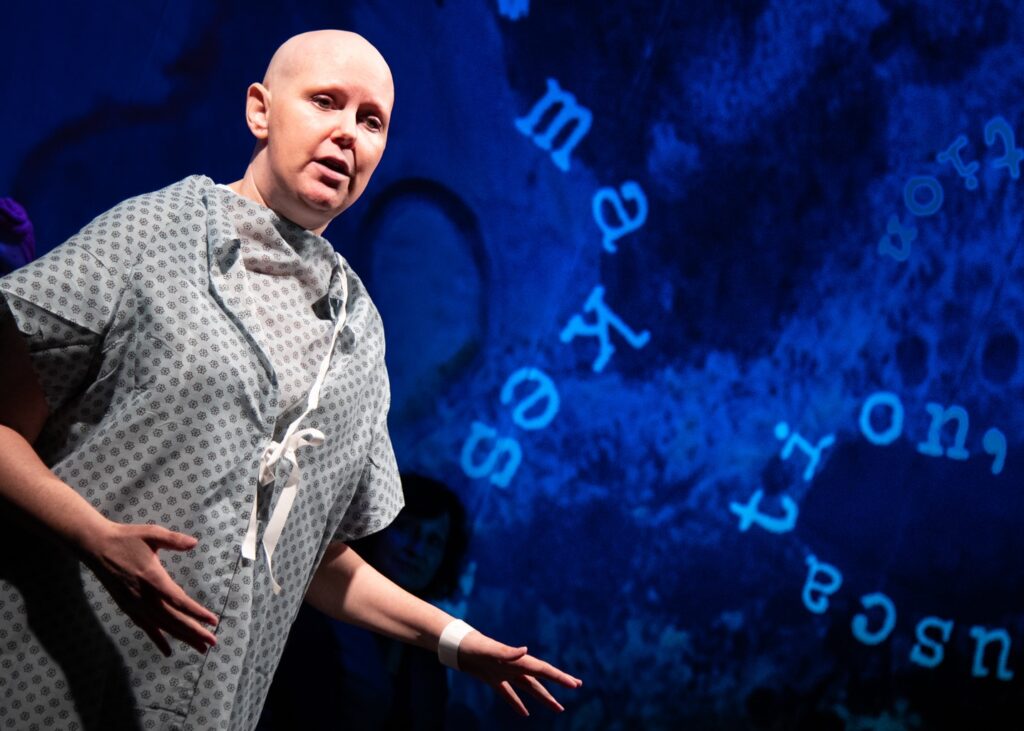 Those two women sharing the stage in Margaret Edson’s 1999 Pulitzer Prize for Drama-winning “Wit” is at once realistic and mind-bending, the former for obvious reasons and the latter because, well, this is the epitome of ‘authentic’ casting. To say, however, that Ms. Cronican’s fine performance as Dr. Bearing is a happenstance of method acting, is to sell her short. Yes, she can certainly identify with the character, but one senses that her incarnation is grounded more in an actor’s instinct than in shared circumstance.

The Seeing Place company strives to achieve its laudable vision to “transform the world into a more empathetic and equitable place” with productions by and about, among other under-served cohorts, “people with disabilities and chronic illnesses.” To that end, “W;t,” sometimes spelled with that semi-colon to point up disputed punctuation in Donne’s Holy Sonnets, is an ideal choice.

Dr. Bearing’s cancer is incurable. “I don’t mean to give away the plot,” she announces early in the 100-minute play, “but I think I die at the end…I’ve got less than two hours. Then: curtain.” Nonetheless, she has agreed to a series of massive doses of chemotherapy to provide data for the research physicians who oversee the procedure. Besides the ‘regular’ side effects, among them nausea and hair loss, the high doses wrack the patient. “My treatment imperils my health,” Vivian understates. 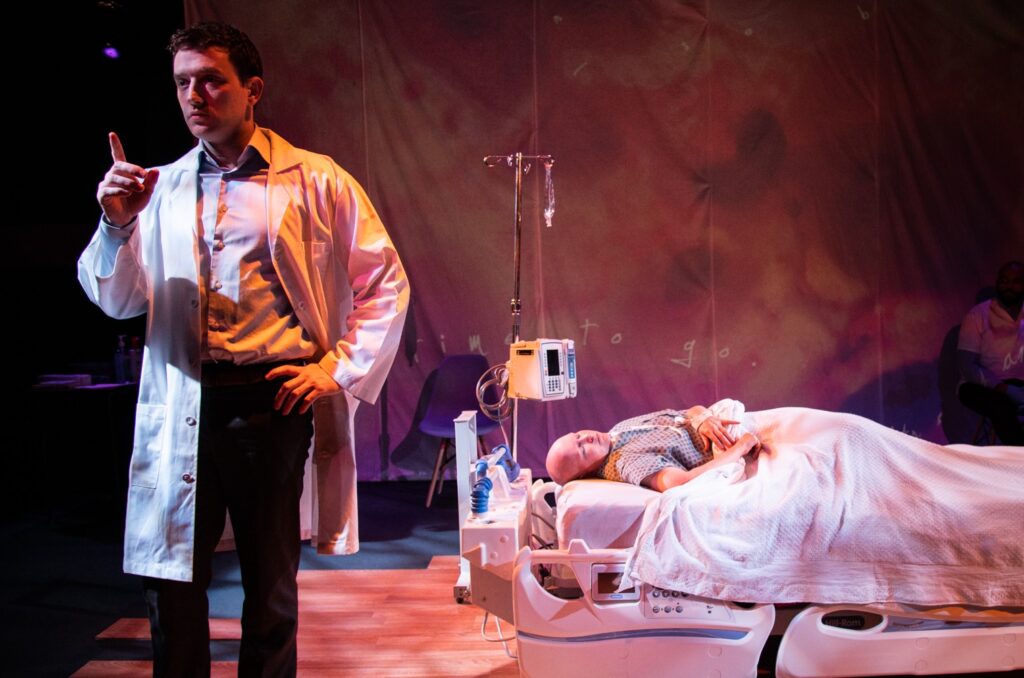 [There have, of course, been advances in diagnosis and treatment of cancer since 1991, the year Edson, a public-school teacher, wrote this, her first and only play, but the situation as presented is plausible.]

In surgical gowns throughout, one tied in back, one in front, Cronican maneuvers effortlessly among Vivian’s realities: within the hospital scenes, enacting flashbacks, and confiding in the audience about the play itself, which, to her dismay, she says, “would contain elements of … humor.” In fact, it is Vivian’s mordant musings that provide humor, without which a play about a terminal illness could be a total downer. A goodly portion of the humor does not register here, but combined with the play’s inherent humanity, enough survives to lighten some moments. (It is not entirely their fault; Covid masks inhibit laughter.)

Among the supporting cast, Robin Friend scores as oncologist Jason Posner, who monitors Vivian’s vitals as she declines. The role is layered between Jason’s purely clinical approach to his patient and his almost reluctant concern for her state of mind and comfort. Friend, whose bio reveals his own history with testicular cancer, navigates those disparate characteristics very well. (He also tosses off medical jargon – myelosuppression, nephrotoxicity, malignant neoplasia et al – with admirable alacrity.) 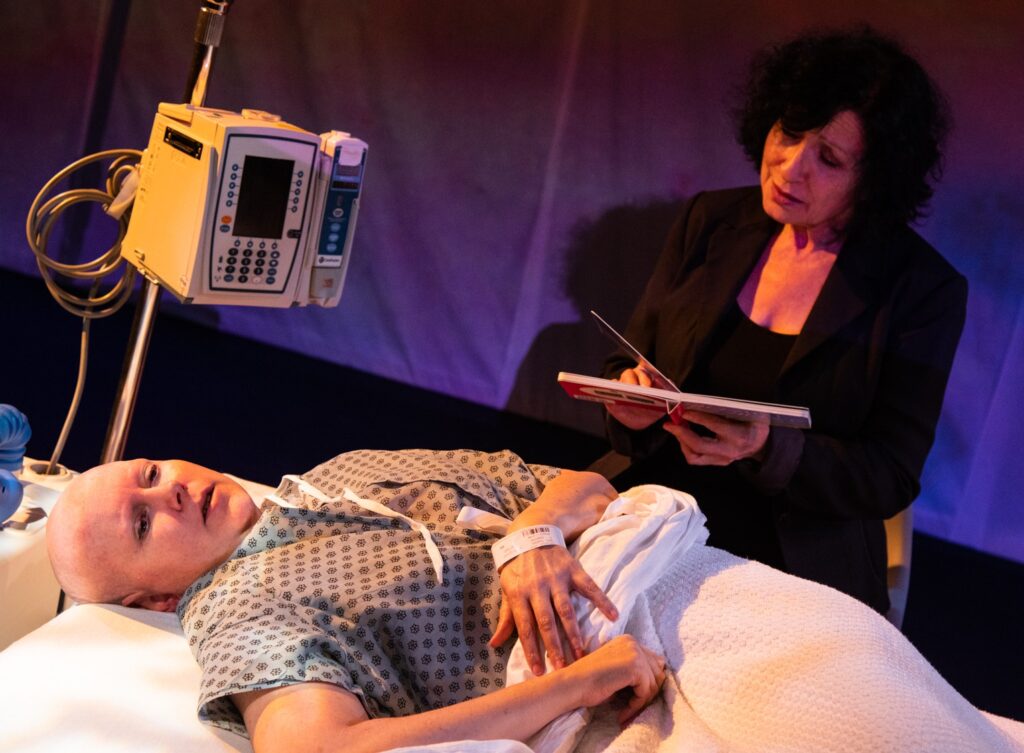 In keeping with Seeing Place’s commitment to non-conventional casting (or non-commitment to conventional casting), Cancer Inpatient Unit nurse Susie Monahan is played by the play’s director Brynn Asha Walker. Their appearance does not conform to the usual image of nurse Susie, but the scenes with Vivian are written so sensitively that the rapport between the two characters retains warmth.

Vivian Bearing was originated in 1997 by Kathleen Chalfont, whose brother’s illness and death from cancer informed her highly acclaimed performance. Judith Light replaced Chalfont during the long off-Broadway run, and Emma Thompson starred in the 2001 Emmy Award-winning cable television film directed by Mike Nichols. Cynthia Nixon appeared in a 2012 limited run on Broadway. Other outstanding Vivians I have seen include Suzzanne Douglas at George Street Playhouse in New Jersey and Ellen Barry at Boarshead Theater in Lansing, Michigan.

Clearly, the play belongs to whomever is playing Dr. Bearing. For now, that actor is Erin Cronican, whose unflagging energy and determination are more than a match for the role. (It plays Wednesday-Sunday because Tuesday is her chemo day. Think about that for a while.) Erin’s cancer diagnosis is not reason to see the play; her excellent performance stands on its own. Admittedly, though, it is reason for the extra layer of admiration she merits. From any angle, Erin Cronican’s achievement is remarkable.

[Margaret Edson includes in her play several disparaging remarks about Shakespeare. Dr. Posner even declares that Donne “makes Shakespeare sound like a Hallmark card.” But what does the playwright decree for the final words spoken to Vivian (by Dr, Ashford) as she slips into final unconsciousness? “And flights of angels sing thee to thy rest.” Hardly a Hallmark card, that.]