In years past I have seen several plays performed in foreign (to me) languages. “Death of a Salesman” and “Fiddler on the Roof,” both familiar works, were perfectly clear in Yiddish, while Ionesco’s “The Bald Soprano” (so-titled from an actor’s line-flub) was no less comprehensible in French than in English.

Now along comes Mint Theater Company’s production of David Herbert (D. H.) Lawrence’s “The Daughter-in-Law,” through March 20 at New York City Center’s Stage II. And, okay, it is not really in a foreign language, but rather “an East Midlands dialect…rich in Old English and lingering Norse influence from the centuries when this part of England was under the rule of Vikings.” (Thank you, dramaturg Amy Stoller.)

The hearty dialect takes a few minutes to parse before settling into an accessible source of the play’s aural pleasures. Miss a word here or there? Doesn’t matter a whit. Delivered by a superb cast, the dialect takes on a lilt, a musicality that draws you in and carries you along with the emotionally absorbing story it explores.

The Mint’s mission, to find and produce long dismissed or forgotten plays, has never been better served. “The Daughter-in-Law,” written in 1913, was not produced until 1967, thirty-seven years after Lawrence’s bitter, wrenching death from tuberculosis at age 45. Structured around a young couples’ domestic tensions, the play touches on labor issues (a pending miners’ strike), wifely obligations within a marriage’s balance-of-power, and a stirring Freudian-infused takedown of maternal overreach. 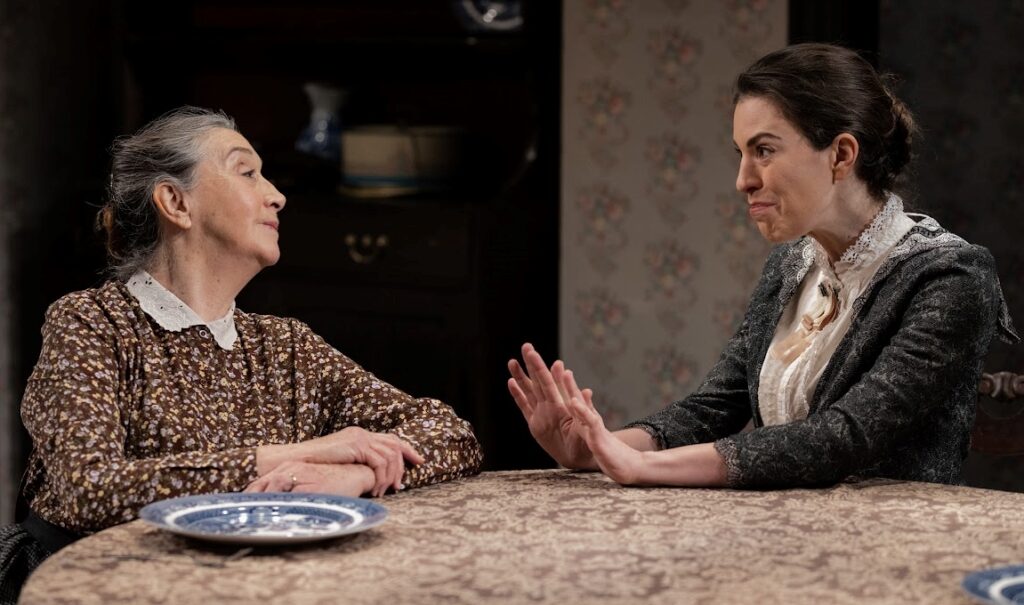 If casting is, as a director friend has written, eighty-five percent of directing, “The Daughter-in-Law” director Martin Platt had an easy go of it once rehearsals commenced. Even before exhibiting their considerable acting chops, the players’ looks and presentments reflect the era and the Erewash Valley coal-mining town of Eastwood, where D. H. Lawrence was born and raised.

My friend had not factored in the actors needing to acquire fluency in a far-removed variation of their native language, which no one in the company had ever before encountered. Platt’s ideal cast has succeeded beyond measure; they speak the dialect as if born to it. 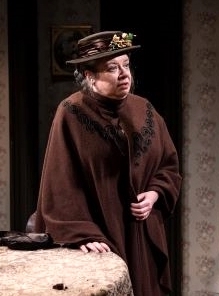 Mrs. Gascoyne and her son Joe ’s conversation about Joe being denied disability payment for his arm injury (“I did it wi’ foolery , an’ not wi’ work,” he explains) is interrupted by a visit from their neighbor Mrs. Purdy, who informs them that her youngest daughter Bertha is pregnant – by the other Gascoyne son, Luther (Tom Coiner), himself married just seven weeks to Minnie (Amy Blackman).

Mrs. Purdy and Bertha will put it on “one o’ them electricians as was along when they laid th’ wires under the road…” for forty pounds (the apparent going rate), a sum beyond anyone’s ability to pay. Except for Luther’s seven-week bride Minnie, who had inherited a hundred pounds from her deceased uncle. And so the plot thickens: to pay or not to pay… 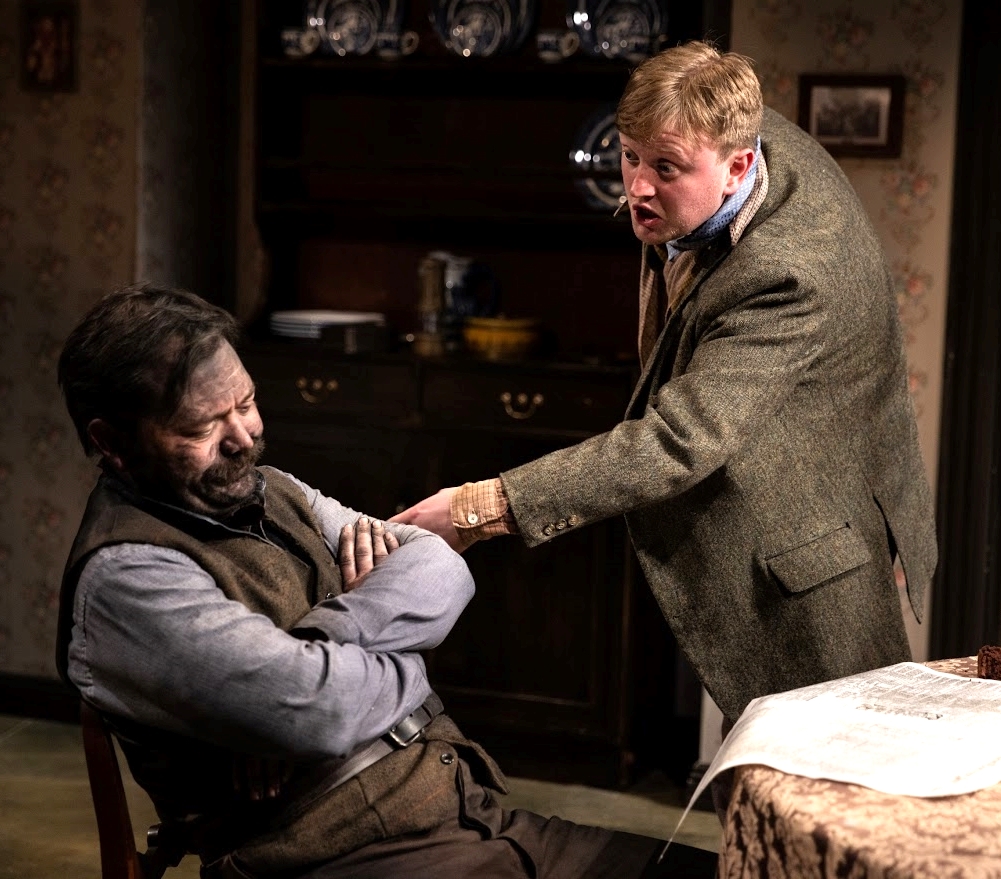 Title character Minnie and husband Luther do not appear until that vexing issue is established, at which point Minnie becomes and remains the focal point of the play. Amy Blackman plays Minnie’s distinctly different relationships with the other three Gascoynes adroitly – as if from separate compartments of the same container. Defying and then re-molding her husband, cajoling and flirting with his brother, and confronting both men’s mother, Minnie is a many-faceted proto-feminist. With a strikingly expressive face and physical gestures that translate as effortlessly as does the language, Blackman’s is a can’t-take-eyes-off performance.

Mrs. Gascoyne is a well-meaning but stern matriarch, unaware of her stifling effect on her sons; Sandra Shipley plays her just so, without negating the woman’s maternal devotion. Polly McKie is the very image of Mrs. Purdy’s tacit acceptance of an unfortunate, but, it seems, not unusual situation. (Defending the asking price, she points out that “Emma Stapelton had forty wi’ their Lucy.”)

Minnie had proposed marriage to Luther after rejecting his awkward overtures; she was twenty-three and still single, after all. Tom Coiner gets Luther’s awareness that he married up in class and intellect as well as the emotional neediness beneath the man-child’s coarse exterior. Ciaran Bowling’s free-wheeling Joe is a pleasing chap, devoted to Luther, smitten with Minnie, and tied to mum’s apron strings…until the knot loosens.

Cast to type or not, the play is ably guided by director Platt in the intimate venue where expressions and gestures are seen up close. Family relationships, both blood and in-law, are reflected in Platt’s staging as, not incidentally, the actors maneuver the kitchen scenes on Bill Clarke’s detailed set, as if in their own homes.

“The Daughter-in-Law” straddles the genres of serious and not-so-serious theater. Along with its weighty issues, the play is rich in humor. Concerns are leavened with light touches that the characters themselves may not intend or even recognize, but that the playwright surely did. The play, Lawrence wrote with what had to be tongue-in-cheek, “is neither a tragedy nor a comedy – just ordinary.”

If you say so, D. H.   But the Mint Theater Company production is quite a bit more.