Eleven outstanding performers (six singer-dancers and five musicians) are at the top of their game on stage, but the biggest stars of “Cheek to Cheek: Irving Berlin in Hollywood” are the title composer, of course, and the director/choreographer, Randy Skinner, who also conceived the piece. The York Theatre Company production, staged in a surprisingly posh venue below St. Jean’s Baptiste Church on East 76th Street (having been flooded out of their former basement digs, twelve blocks south), is consistently upscale and upbeat, even when the tempos are in ballad mode. 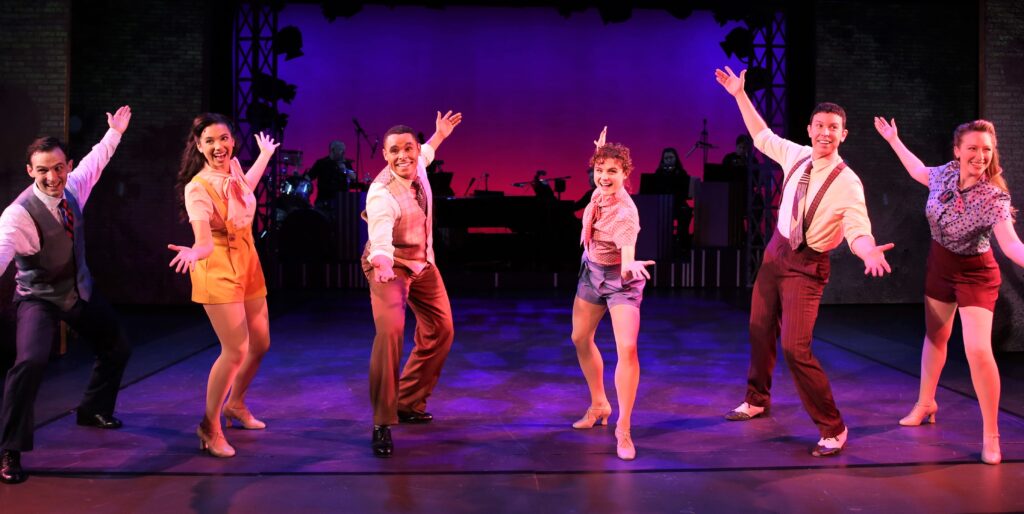 Performed in chronological order, abetted by Barry Kleinbort’s minimal book, the show opens with a soundtrack clip of Al Jolson singing “Blue Skies” from “The Jazz Singer,” the first “talkie,” from 1927. That song, one of Berlin’s most enduring, had been a last-minute insert into the Rodgers and Hart musical “Betsy” at the behest of its star, Belle Baker. “Betsy” ran just 39 performances, but “Blue Skies” is said to have received twenty-four encores on opening night. And legend has it that Ms. Baker went up on the lyrics during #24, prompting Berlin to stand in the audience and finish the song with her. (Let’s believe it together.)

In between “Blue Skies” and the 1965 standalone “I Used to Play It by Ear,” are two dozen Berlin numbers, most from the Golden Age of movie musicals. One such, the 1935 Fred Astaire/Ginger Rogers classic “Top Hat,” is represented by “Isn’t This a Lovely Day (to be caught in the rain),” “The Piccolino,” which fostered a dance craze, and “Cheek to Cheek,” Berlin’s first Oscar-nominated song, which lost in 1935 to “Lullaby of Broadway” by Harry Warren (music) and Al Dubin (lyrics). 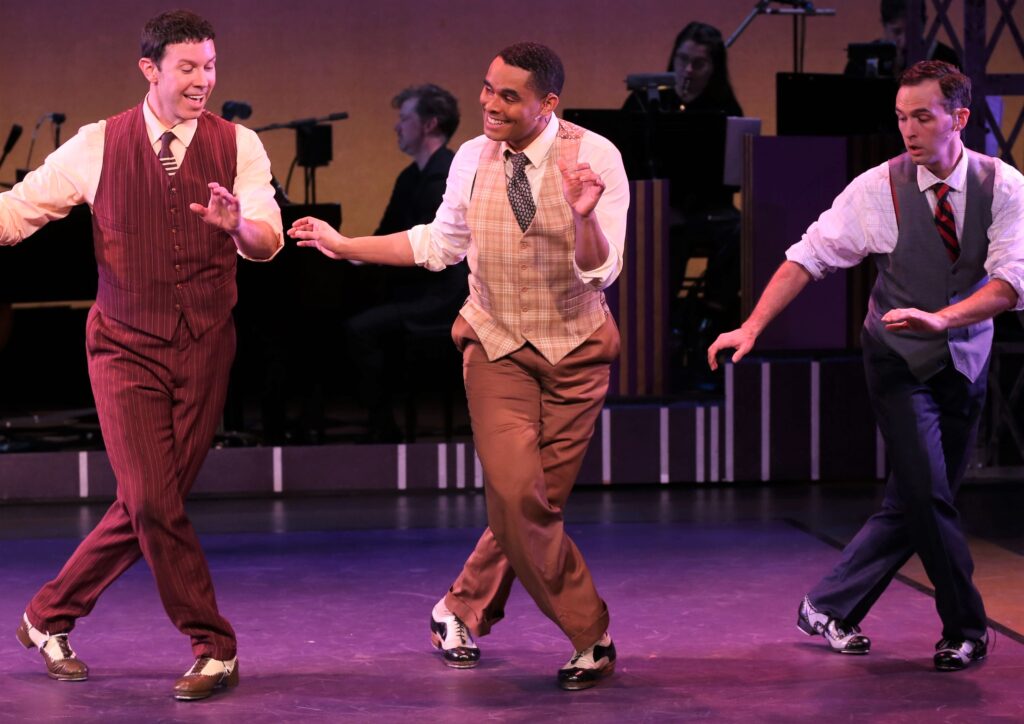 [Neither the show, nor certainly this review, is an in-depth Berlin bio (several are in print), but it is worth noting that while Warren had Dubin, George had Ira, Rodgers had Hart and, later, Hammerstein, etc., etc., Irving Berlin was the first major composer to write his own lyrics. He was also the first to append his name to titles,  a la “Irving Berlin’s White Christmas.”]

While about a third of the selections were new to me, “Cheek to Cheek” is not a resurrection. The selections make their points; several, in fact, were purely instrumental dance compositions, “The Piccolino” and “The Yam” among them. The chronology makes for an interesting thread, and the classic numbers, for anyone even vaguely familiar with them, are wonderfully arranged by musical director David Hancock Turner and choreographed by Skinner (tap routines, swing and jazz moves, even a tango dip)…all performed with second-nature aplomb. Nicole Wee’s varietal costume designs evoke the period, and Jason Kantrowitz’s lighting is spot-on. 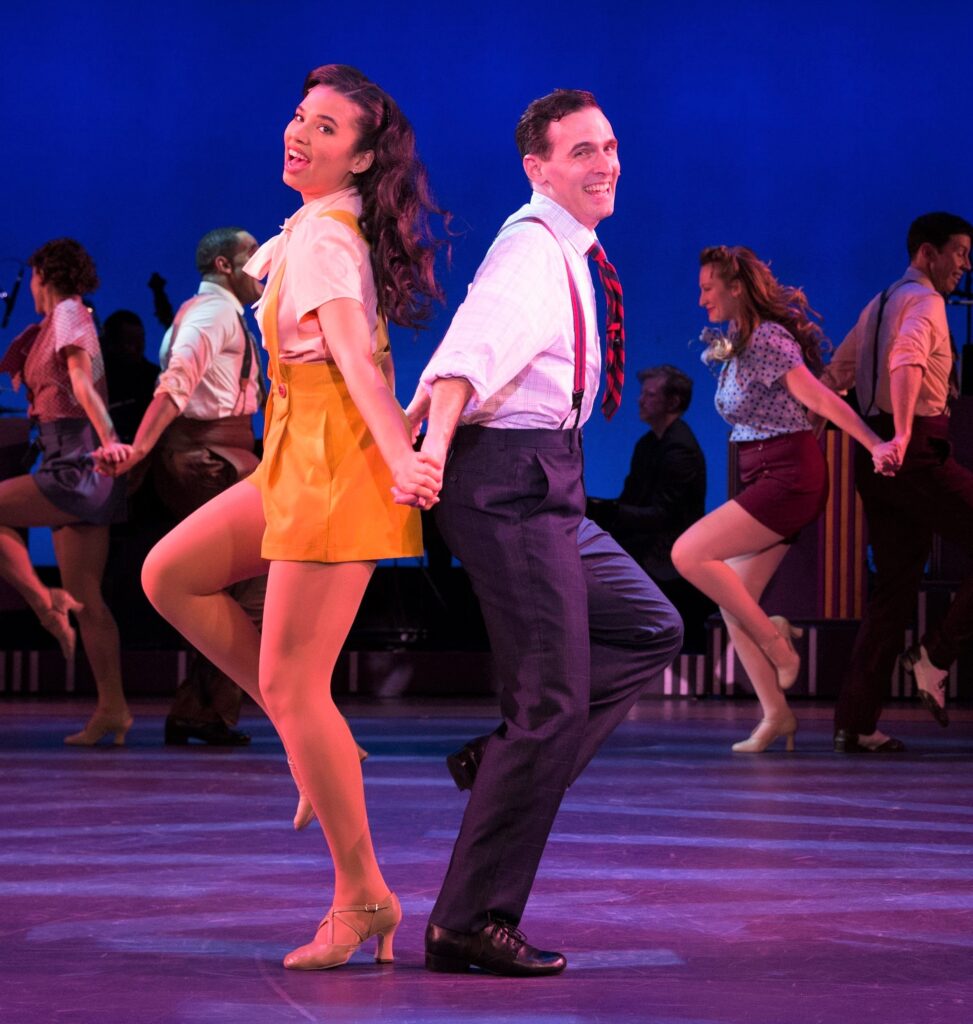 You’ve heard the quip about Ginger dancing as well as Fred, even backwards and in heels? That came to mind during “Back to Back,” a number written for the 1939 film “Second Fiddle,” in which the couples perform intricate soft-shoe, swing and balletic moves in perfect synchrony…back-to-back. It is a marvel of choreography and execution. (Stage right and stage left are which way now?)

The set list is as notable for what is not included as for what is. “White Christmas” and, but for a snippet illustrating its re-cycled opening bars, “Easter Parade” are among the missing. The inclusion of those revered Christian-holiday pop hymns, both written by a Jewish Russian immigrant, would be fodder for a show of a different hue, one that will not be fleshed out here. (We are also spared “God Bless America,” perhaps in anticipation of a Kate Smith musical.) What is there is choice, from Jolson’s grainy warble through to the “Let’s Face the Music and Dance” finale. 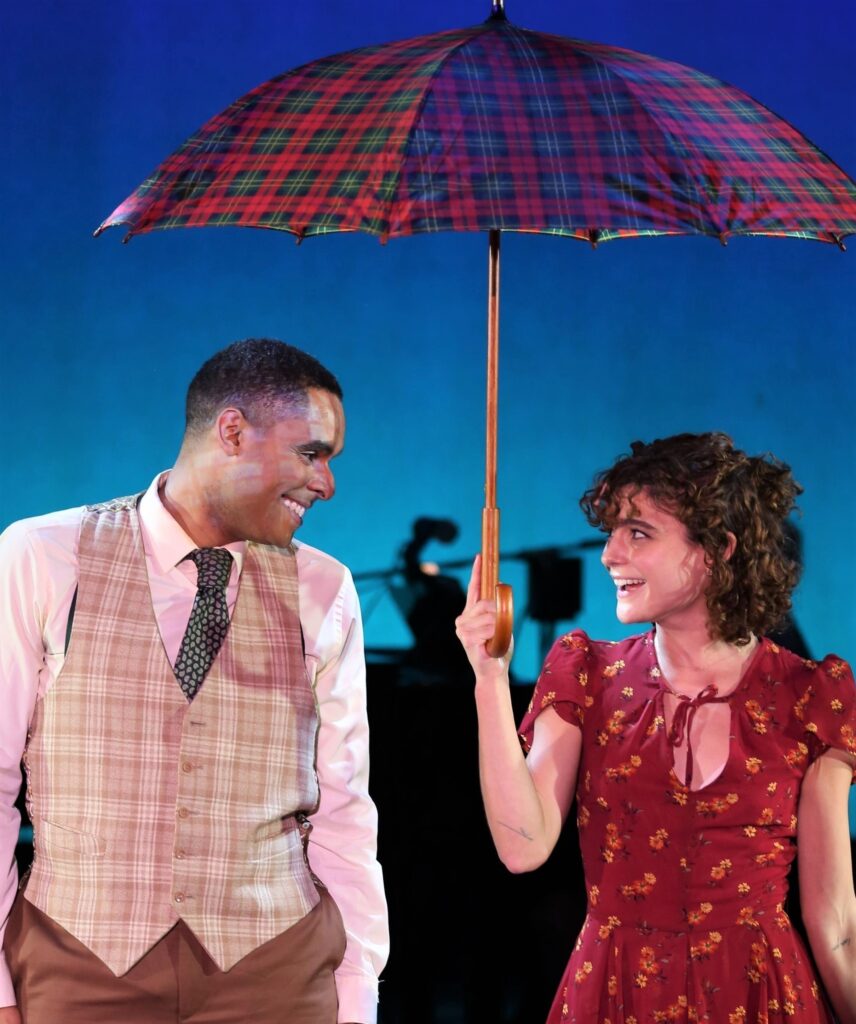 “Isn’t This a Lovely Day?” for Phillip Attmore and Melanie Moore to be caught in the rain

And let’s name the terrific band, led by music director and arranger Turner on piano, with Louis B. Crocco, whose “Drum Crazy” solo slays; Noelle Rueschman and Amy Griffiths on reeds (at least two each); and Joseph Wallace, whose stand-up bass anchors the group.

Irving Berlin died in 1988 at age 101. Many of his 1,500 song titles directly reference singing or dancing, including ten in this show. This “Cheek to Cheek” ensemble is as fine a musical collaboration as you will see on or off Broadway – or anywhere else. “Let’s Face the Music and Dance” indeed. (Or back up to it.)