“Morning’s at Seven” revived: The Play and Its Players Have Aged Well

At the intermission of “Morning’s at Seven,” directed by Dan Wackerman in revival at the Theatre of St. Clement’s, I mentioned to my companion that Paul Osborn’s 1940 comedy, which I had recently read, did not seem as good on its feet as it did on the page. Soon enough, I realized I had based that opinion on having read the entire play but having seen at that point only the first third. (Written in three acts, it is performed with one break.)

Like many (most?) worthy plays, especially comedies, the first third – or even half – is necessarily heavy on character and plot exposition, allowing them to proceed in such a way that we do not question what follows. What follows in “Morning’s at Seven” is a wonderfully warm, comforting tale of four sisters in their late-60s/early-70s whose mutual bonds of affection and concern have remained secure through the thick and thin of…well, of life. 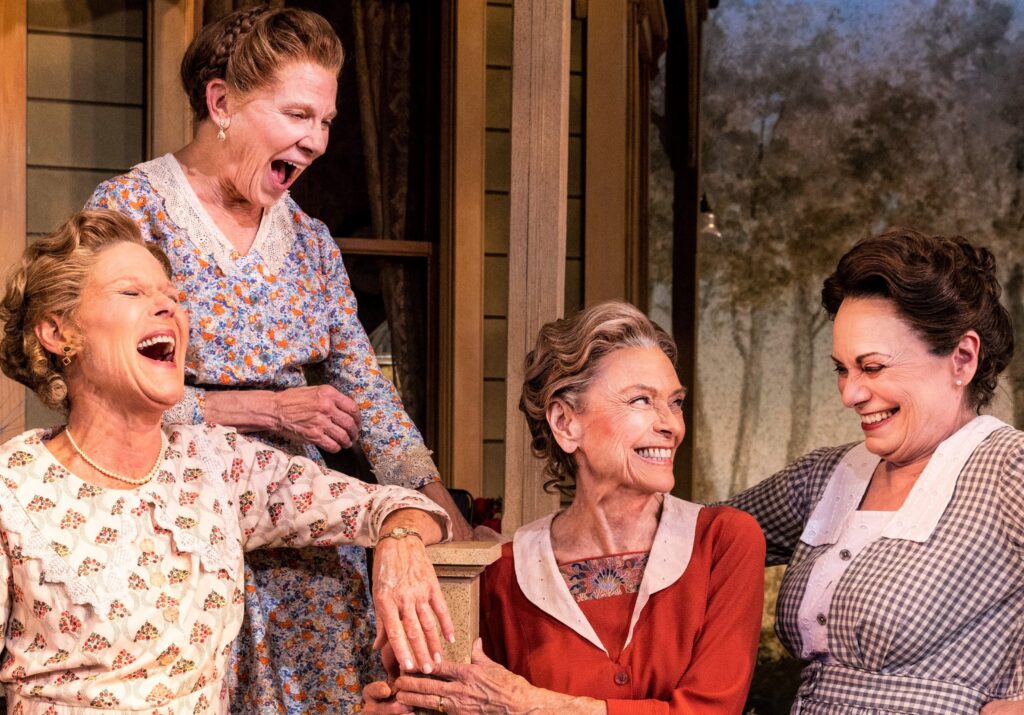 Wonderfully enacted by a cast of seasoned pros, the four sisters and three husbands squabble some, laugh some, and reveal facets that surprise one another (and the audience). Does it all turn out all right? Well, sure, and getting there is ninety percent fun. The other half (acknowledging Yogi Berra) is drama-lite, but drama nonetheless, as intriguing as in many a more serious stage-family album.

It is 1922. Two back porches open onto “two backyards in an American town,” which Harry Feiner’s set creates remarkably well in the relatively small venue. Cora (Lindsay Crouse) and Theodore, nicknamed Thor (Dan Lauria), live next door to Ida (Alma Cuervo) and Carl (John Rubenstein). The women’s unmarried (“maiden”) sister Arry (Alley Mills) lives with Cora and Thor, while the fourth sister, Esther (Patty McCormack), and her husband David (Tony Roberts) live within walking distance. At rise, they are awaiting the arrival of Ida and Carl’s son Homer, who is finally, after twelve years, seven of them engaged, bringing his fiancée Myrtle to meet the family. (“Homer’s shy. He can’t be rushed into anything.”) 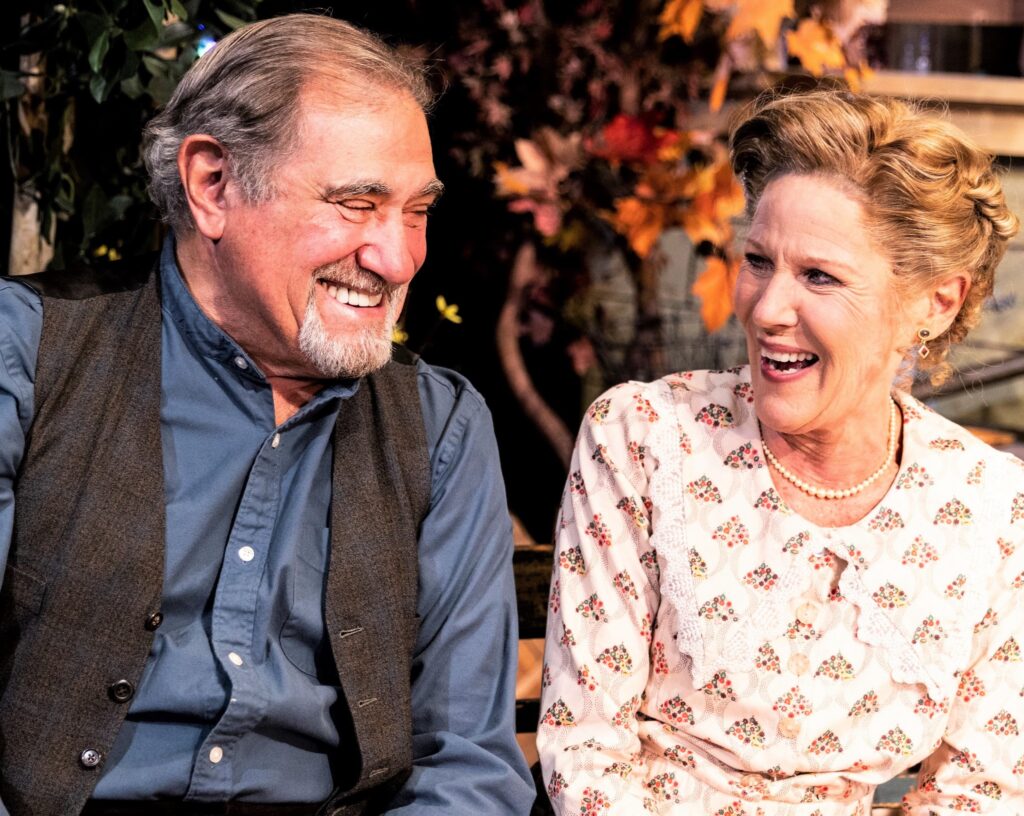 Seemingly similar, as the sisters appear in Barbara A. Bell’s matronly costumes, the characters diverge as the story progresses – and a deceptively intriguing story it is. Arry’s relationship with brother-in-law Thor is not what it seems – or what is widely assumed. Carl is subject to “spells,” musing about going “back to the fork.” (“I’ve got to take the other way,” he says, speaking, I suspect, for more than a few of us.) David’s superiority complex (“He thinks we’re morons”) meets its match in Esther’s emerging independence. (‘Feminist’ would be a stretch, but it is tempting.) 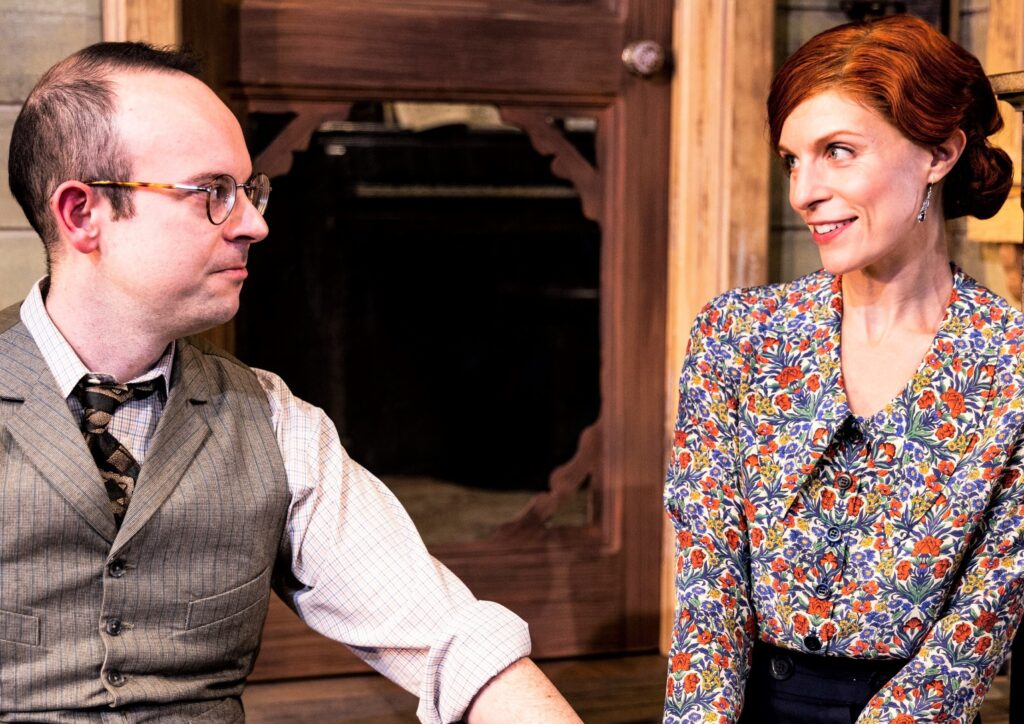 Homer and Myrtle are an endearing engaged couple. He presents as a mama’s boy milquetoast, but ‘still waters,’ as they say; and she is as delicate as a porcelain egg. Homer and Myrtle are simple types, yes, but Jonathan Spivey and Keri Safran play them without a trace of condescension. (“I’m just about as happy this minute as any girl has a right to be” is contagious.)

Lauria’s avuncular Thor, Rubenstein’s addled Carl and Roberts’s domineering David are all fully realized, and the four certain-age actresses are marvelous. One does not doubt that Crouse’s steadfast Cora, Cuervo’s motherly Ida, McCormack’s pre-modern Esther and Mills’ sensitive Arry are sisters. (Arry’s moving-out scene is a beaut.) Under Wackerman’s direction, the plentiful humor is never forced.

The title, incidentally, comes from “Pippa’s Song,” Robert Burns’s poem that includes the line “Morning’s at seven…” and concludes with “All’s right with the world.” As indeed it is for the nine characters in Paul Osborn’s fine play.

Through January 9 at Theatre at St. Clemens, 423 West46th Street, NYC. For schedule information and tickets: www.morningsat7.com

While all these mature performers’ acting chops are well intact, it is impossible to not recall some of their earlier credits. Dan Lauria and Alley Mills, for example, played Kevin’s parents on the original “The Wonder Years;” John Rubenstein was the original Pippin; and Patty McCormack, for heaven’s sake, was the murderous child in “The Bad Seed” on stage and film (at age eight). Lindsay Crouse spoke the most explosive lines in the courtroom scene in “The Verdict”:  “I didn’t write a nine,” former admitting nurse Kaitlin Costello Price intones, “I wrote a one.” And then, “Who were these men? I wanted to be a nurse.” Indelible.