How do you improve on perfection? Well, you can’t – by definition. But you can approach it from a different direction, which is what David Lindsay-Abaire has done in adapting his marvelous 2002 play “Kimberly Akimbo” into a 2021 musical. With a seamlessly tweaked book that retains and even deepens all the essentials, and his own inspired lyrics set to composer Jeanine (“Fun Home,” “Caroline, or Change”) Tesori’s fetching melodies, Lindsay-Abaire has re-set his flawless gem, on display at Atlantic Theater Company now through January 15. 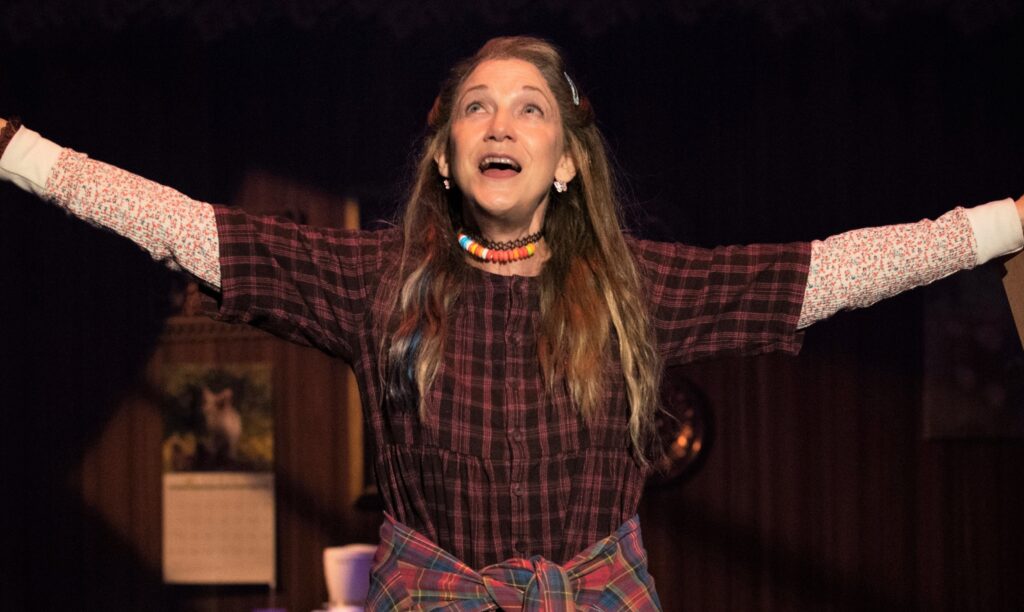 Kimberly is afflicted with progeria, a rare disease that causes the body to age about four-and-a-half times the normal rate. Thus, sixteen-year-old Kimberly is in her early seventies body-wise, and near the life expectancy of progeria-diagnosed persons. While an unusual topic for a play, never mind a musical, the piece is not overly sentimental or maudlin. The ‘witty and wise comedy with belly laughs and heart tugs,’ as I described it in 2002, embraces its new incarnation as if by osmosis. The songs evolve naturally, as if they were always there, just waiting for another perfect actor to embody Kimberly.

Victoria Clark is the same age now as the original, Marylouise Burke, was in 2002: in their early sixties. It takes Ms. Clark less than a minute to establish both of Kimberly’s ages. The unruffled, near-elderly-appearing woman is seated on a bench, chewing her hood’s drawstrings. She is waiting for her father to pick her up from school. 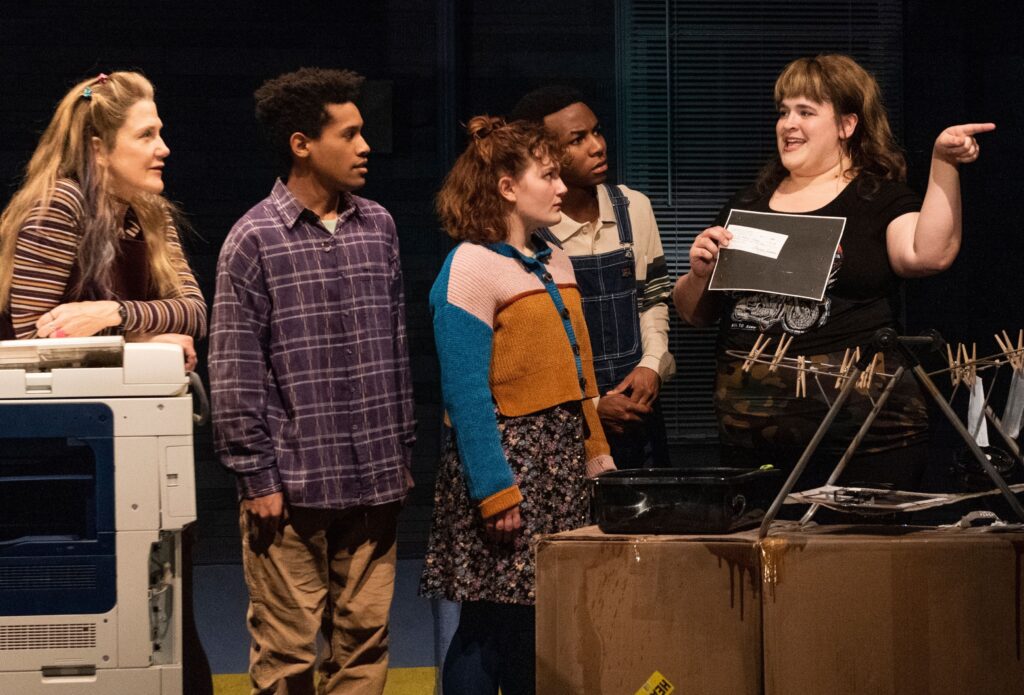 The scenes alternate between Kimberly’s New Jersey high school (cue Jersey jokes) and her home, where dad (Steven Boyer) is a borderline drunk and mom (Alli Mauzey) is well-along pregnant. (David Zinn’s open-area sets leave plenty of breathing space.) Kim’s condition, while a constant presence, is seldom addressed directly at home. (Mom’s “I want this one to be perfect” is more jarring for its rarity.)

A science-class assignment to analyze a malady brings Kimberly and anagram-nerd Seth (a disarming Justin Cooley) together as lab partners, with her disorder their topic (scurvy was taken). Their relationship deepens, with each step etched on Kimberly’s delicate visage.

Jessica Stone’s direction is deceptively leisurely; her high-schoolers – Seth, four multi-talented classmates and, yes, Kimberly – are preternaturally wise as today’s teens tend to be, and they move to Danny Mefford’s hip choreography without affectation. Music director/conductor/pianist Chris Fenwick’s superb eight-piece “band” is a welcome presence, visible throughout on a high upstage platform.

A sub-plot about Kimberly’s outrageous aunt Debra (amusing Bonnie Milligan)’s scheme to steal, re-process, and cash forged checks seems like a diversion, until it becomes the key to the counterintuitively uplifting ending. The musical will send you out of the theater on a high, with the image of Kimberly’s satisfied half-smile reflected in your own. Victoria Clark’s stunning performance must be seen to be believed.

David Lindsay-Abaire was awarded the 2007 Pulitzer Prize in Drama for his play “Rabbit Hole,” about a family coping with the recent death of their young son. My own son Pete had died in 2003, and the play, which I saw on February 1, 2006, resonated with me. One scene in particular helped me temper my grief…and still does to this day.

In that scene, the boy’s mother (Cynthia Nixon in the original) asks her own mother (Tyne Daly), who had also suffered a loss years before, if “the feeling” ever goes away. No, it does not, mom explains, but

“At some point it becomes bearable….something you carry around – like a brick in your pocket. And you forget it every once in a while and then you reach in…and there it is. ‘Oh, right, that.’ Not that you like it exactly, but it’s what you have instead of your son…so you carry it around. And it doesn’t go away, which is…” She hesitates. “What?” “Fine, actually.”

At an awards banquet a few years later, I was seated at table with Lindsay-Abaire. I thanked him for the brick-in-pocket simile, which was an ongoing solace for me. “You must have experienced something similar,” I said, “to have created that image.”

“No,” the playwright replied. “I just made it up.”

On Wednesday evening, June 21, 2000 I saw Kelsey Grammer’s turgid  production of Shakespeare’s “Macbeth” on Broadway. Performed in one 140-minute act, it was unremittingly yawn-inducing. (Reportedly, the producers had wanted to close it in Boston, but Grammer, in an act of masochism, put up his own money and brought it to New York.)

The following morning, I read that Britain’s Royal Shakespeare Company was ending its U.S. tour of the same play at Long Wharf Theatre in New Haven, Connecticut. Eager to erase the image of the previous night’s debacle, I called the Long Wharf box office to purchase a ticket to the final matinee on that Sunday, June 25. Sold out, I was told.

Hoping to secure a held-back ticket, I called Long Wharf’s press office only to learn that their supply of ‘house seats’ had also been scooped up days – if not weeks – earlier. “Damn,” I said. “I just saw the Broadway production and want – need, actually – to supplant that image.” 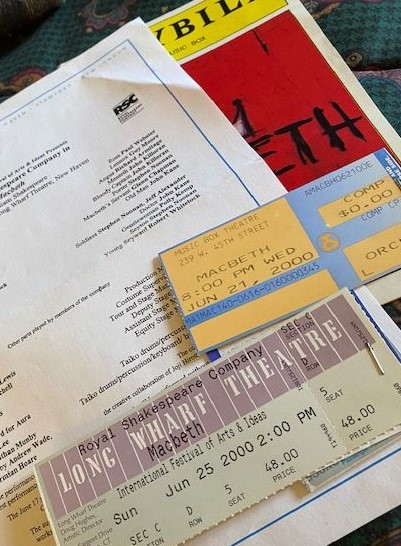 Also performed in one act – and shorter by twenty-plus minutes – the same words flew off the stage with bite and clarity, sending shivers through a rapt audience. The play was viscerally scary, palpably sexy, and downright funny in unexpected spots (not just the Porter). Harriet Walter’s Lady M was achingly alluring; Diane Beck, doubling as a Weird Sister and Lady Macduff, was heart-rending in the latter’s scene; and Gregory Doran’s direction on the square stage was both intimate and fantastical. Far and away the best Macbeth I have seen, Antony Sher’s commanding performance is an indelible memory. I owe that Long Wharf press woman a debt of gratitude for having enabled me to see the brilliant actor in one of his most lauded roles.

Among the finest and most awarded actors of his generation, Sir Antony Sher died on December 2 at age 72.