Several terrific performances in the current Broadway revival of “Company” owe their provenance to its gender-switched casting. Originally about NYC bachelor Robert/Bobby being feted on his 35th birthday by ten of his friends (five couples), who also noodge him about being single at that advanced age (Imagine!), even as he grapples with his own ambivalence, the show now centers on birthday-girl Bobbie, who is subject of the same chagrin over her apparent commitment phobia.

Switching that pivotal role from male to female trickles down to some of the characters with whom he, now she, interacts. Still straight, Bobbie’s past/present romantic partners are now men and while four of the five couples are still hetero, one is same-sex male, a change that works better, I would wager, than might have been expected. 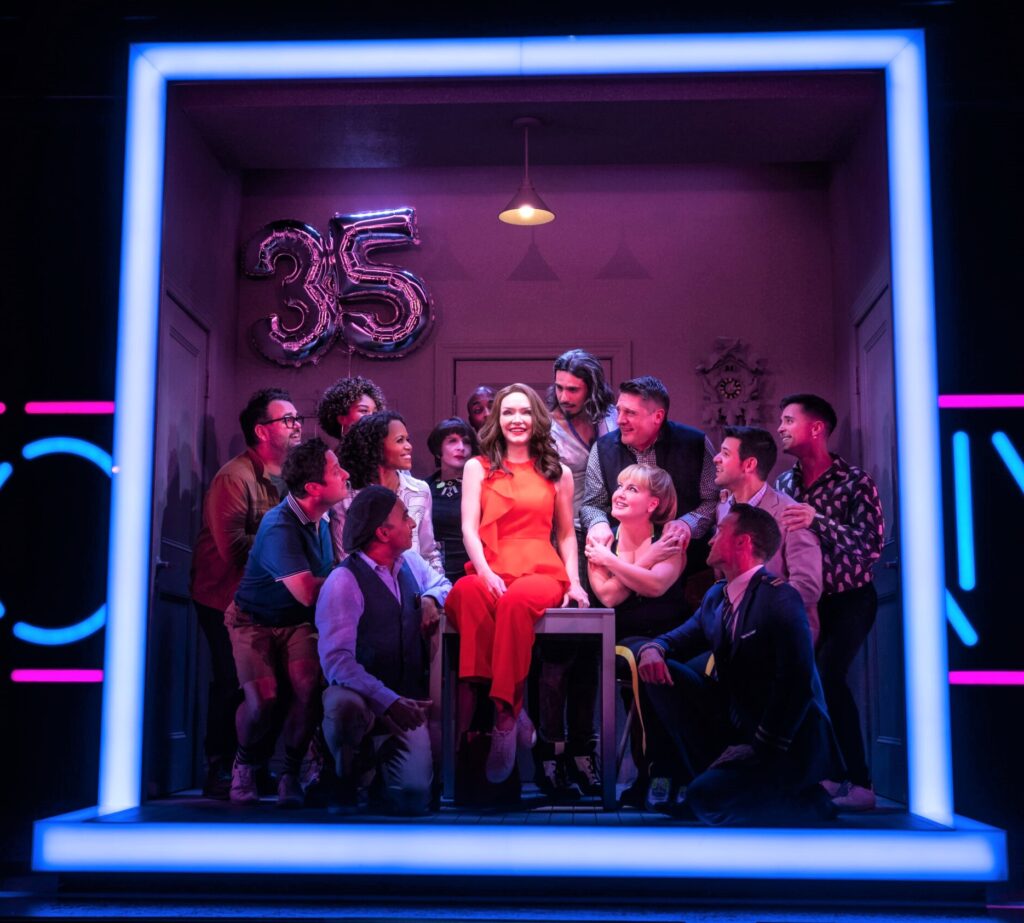 Katrina Lenk, center, and the cast of “Company” [Photo:Matthew Murphy]

Overall, however, the concept comes off as arbitrary – not gimmicky exactly, but close to it. With notable exceptions, it is something of a distraction from Stephen Sondheim’s innovative music and lyrics and from director Marianne Elliott’s fine staging.

Katrina Lenk, fresh from her 2018 Tony-winning turn in “The Band’s Visit,” would seem an ideal Bobbie, but her natural coolness (as in vibe), so well-suited for “Band’s Visit” (and “Indecent” before that), is a poor fit for Bobbie. Much of George Furth’s book, already revised for a previous Broadway revival, is given over to other people talking about Bobbie, but besides Ms. Lenk’s considerable attractiveness, the over-attention seems intended to support rather than illuminate the character. And even though Bobbie questions her own status, notably in her eleven o’clock number “Being Alive,” isn’t the idea of a single-by-choice 35-year-old woman (or man) being an outlier, in 2021, past its sell-by date? Where Robert’s jealousy-inducing swinging-single status at 35 might have been fair game in 1970, reluctance to accept an independent woman’s choices in 2021 is out of touch. (No? Tell that to the single career-woman who accompanied me to the show.)

What may well be timeless are some of the married-couples’ vignettes that unfold, any one of which would be right at home in an evening of one-acts, which, in fact, they once were, of Furth’s. 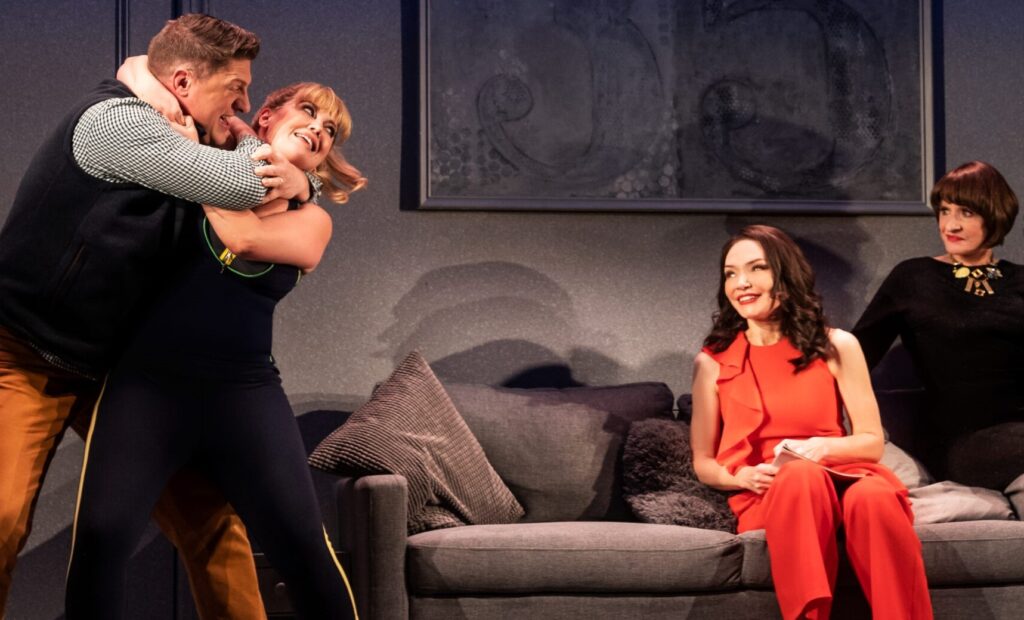 In the first of these, Christopher Sieber, and especially Jennifer Simard, set a high standard of hilarity as Harry, who challenges his wife Sarah to a demonstration of her recently acquired jiu jitsu skills. Rarely has a slapstick routine been better adapted to a NYC apartment living room, nor has a song better accompanied a scene than does “The Little Things You Do Together,” dryly (which is to say perfectly) offered up by Patti LuPone. 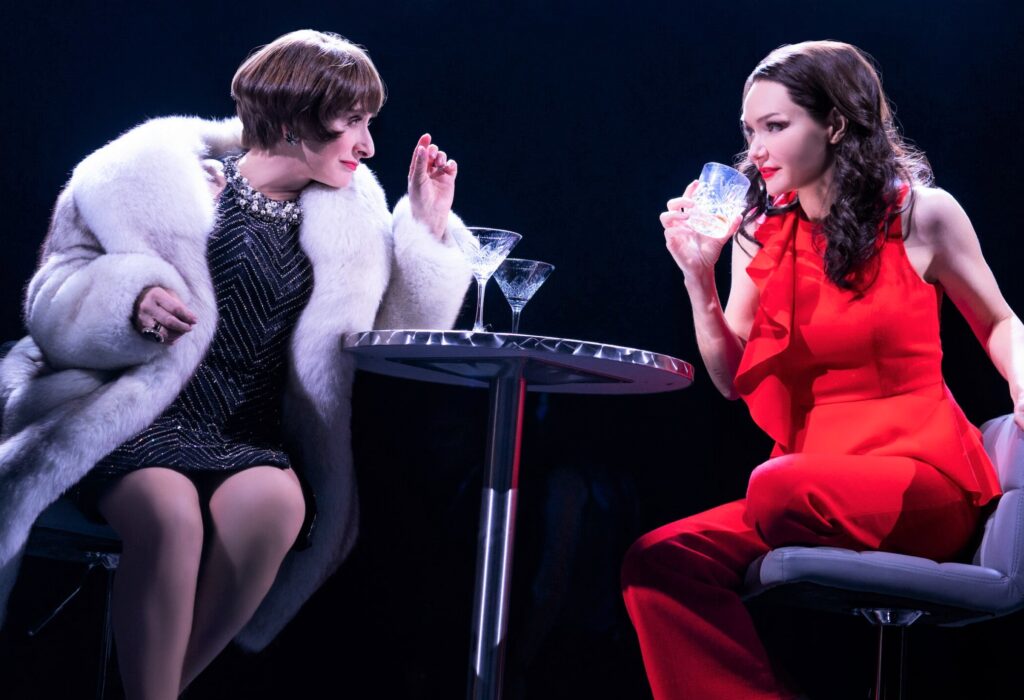 As perpetually sloshed Joanne, the peerless LuPone’s own eleven o’clock number, “The Ladies Who Lunch” is in itself worthy of her co-star billing, but elements of the characterization are diluted by the gender adjustment. Looking “right back” at Bobbie, not Bobby, for example, loses its bite. Suggesting to Bobbie that she liaison with her, Joanne’s, husband Larry, rather than making her own pass at Bobby, is a reach. And the retort to Joanne’s remark about someone being taken care of shifting from Bobby’s “But who will I take care of?” to Bobbie’s “But who’ll take care of me?” further pigeonholes the female character. 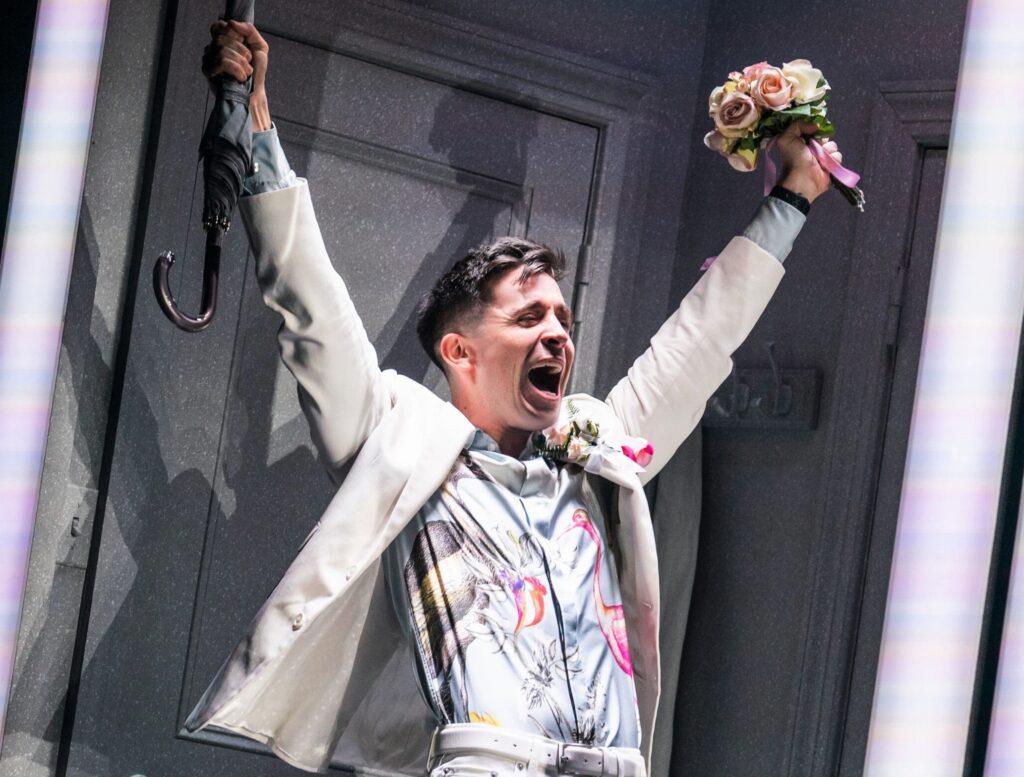 Jamie is “Getting Married Today” (Or not.) Matt Doyle stops the show. [Photo Matthew Murphy]

The switch that most successfully comments on today’s social structure is that of Amy and Paul to Jamie and Paul, a now-male couple on their wedding day. Jamie’s “Getting Married Today,” a rapid-diction challenge to say the least, is so deftly delivered by Matt Doyle as to inspire awe. He literally – and deservedly – stops the show. And a novice getting high on pot has never been better acted than here by Christopher Fitzgerald. He and Nikki Renée Daniels and Ms. Lenk float their way deliciously through that scene.

Flight attendant April is now Andy, portrayed flawlessly by Claybourne Elder as a dim hunk. (“It’s not easy to act dumb,” quoth my actress friend.) My quibble here – and a quibble it may be – is that the husbands hovering over the bed while Bobby and April are making it was amusing, if a tiny bit creepy, but the same men in the same voyeuristic formation while Bobbie is being, um, serviced by Andy is less amusing and really creepy. It is symbolic, yes; they are not actually at bedside, but still… 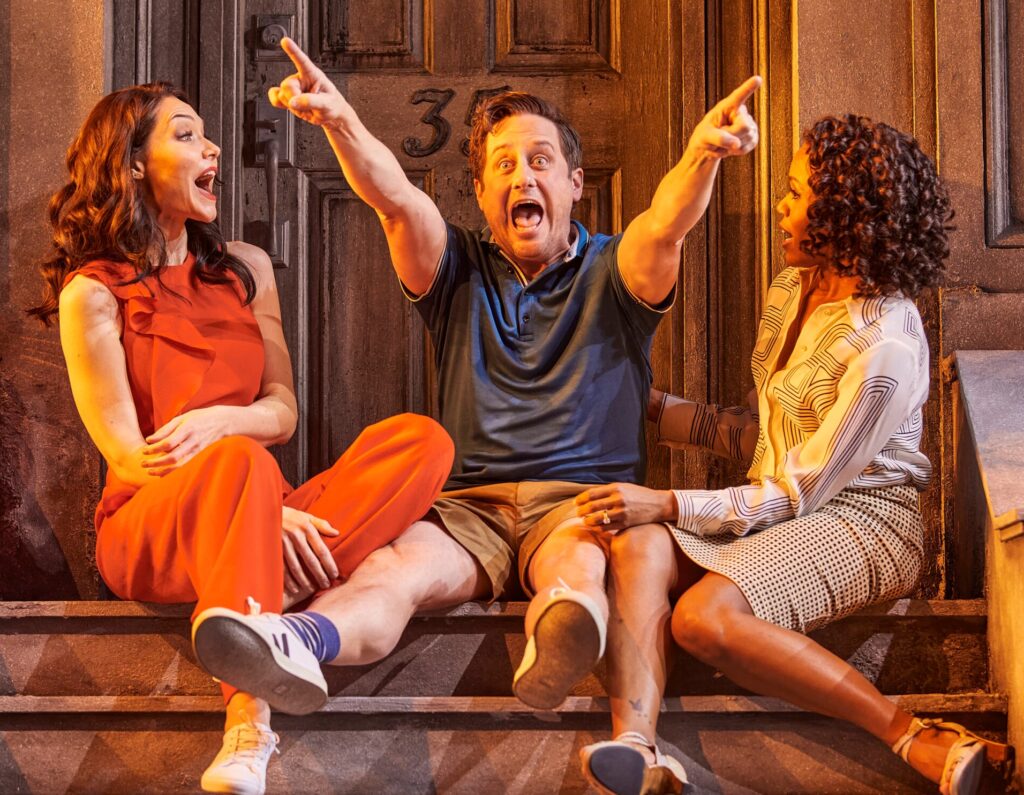 Every character except Bobbie doubles as members of the “Company” company, and while the script specifies “no dancing…ensemble,” Liam Steel’s minimal choreography serves its purpose. Director Elliott’s gapless pacing and Bunny Christie’s smooth-shifting sets keep the nearly three-hour show (including intermission) from dragging. Neil Austin’s lighting brightens the proceedings, and music director/conductor Joel Fram’s rich, resonant orchestra, dimly visible throughout on a high upstage platform, is a Sondheim-worthy treat.

In a joint presentation a few years ago, my colleague Marc Miller noted the 1970 “Company” as one of the Seven Turning Points of the American Musical Theater. (“Showboat” and “Oklahoma!” were among the others.) I reckon that distinction still holds, but it is a safe bet that the next revival will eschew Bobbie for a Bobby.