Long Live the King! (Lear, that is…and Cordelia too)

In calendar year 2014 I saw four different productions of Shakespeare’s “King Lear.” In all of them, and six or eight others over the years, Lear and his daughter Cordelia [spoiler alert] died at the end.  As devastating as are the deaths of Shakespeare’s Romeo and Juliet, it is Lear’s death from heartbreak as he cradles the just-hanged body of his loyal daughter that routinely brings me to tears. Performed as well as I’ve seen it at Stratford, Ontario, for instance (three since 2002), the only onstage Shakespeare death not externally caused can be agonizing to watch.

Apparently, Irish poet and gospel preacher Nahum Tate thought so as well, because in 1681 he published a “happy ending” version of the play that became the dominant one until Shakespeare’s original text was restored some 150 years later, circa 1838. Rarely seen since then, it is being performed in Manhattan parks through August 8 by NY Classical Theatre Company, whose artistic director Stephen Burdman took Tate’s makeover and ran with it. The resulting mashup succeeds on multiple levels. (Shakespeare purists may now be excused.) 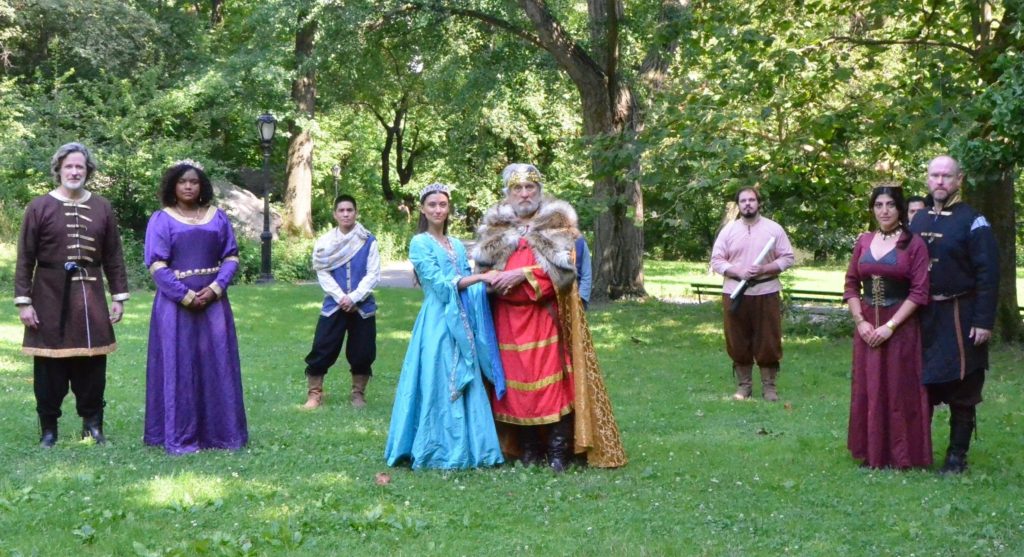 For one, it hangs together as a dramatic piece, perhaps more to Burdman’s credit than to Tate’s. Where Tate strayed quite far from the epic tragedy, Burdman, without messing with Tate’s happy ending, restored some of the Bard’s intent.

This is a good place to advise that familiarity with Shakespeare’s “King Lear,” while a distinct plus, is not essential to understanding and enjoying Tate/Burdman’s version (or, I hope, this commentary). Two women near me, who had simply sought a respite in the park, were so taken with the play and its ending (about which more below), that they decided they never wanted to see it any other way.

On its path to the happy ending, the main story line is reasonably intact. Contemplating retirement at age 83, King Lear (John Michalski, very imposing…and audible throughout in the night air) plans to parcel out his kingdom to his three daughters, in shares determined by how fervently each declares her love for him. Bad idea. (One modern dramaturge calls it childish. Early-onset for sure.)

Two of the daughters are awarded shares based on their effusive (and transparent) fawning, while Cordelia shows restraint and is banished. There is more to it, of course, but the upshot is that the two “serpent’s teeth” daughters betray their father, while Cordelia remains truly devoted. In the Shakespeare, she also weds the King of France, who is missing altogether here. (I missed him, but romance blossoms elsewhere.)

Also absent from Tate’s version was Lear’s wise (and wisecracking) companion Fool. I say “was” because director Burdman restored the character to the Tate. In so doing, he facilitated a particularly outstanding performance among the overall excellent cast. Lear’s daughter Cordelia and his Fool, whose appearances in the play do not coincide, are often doubled by the same actress: Cordelia as a woman, of course, and Fool either impersonated as male or androgynous. The two have never been played better – or to better effect – than here by Connie Castanzo, with the character doubled, not just the actor. 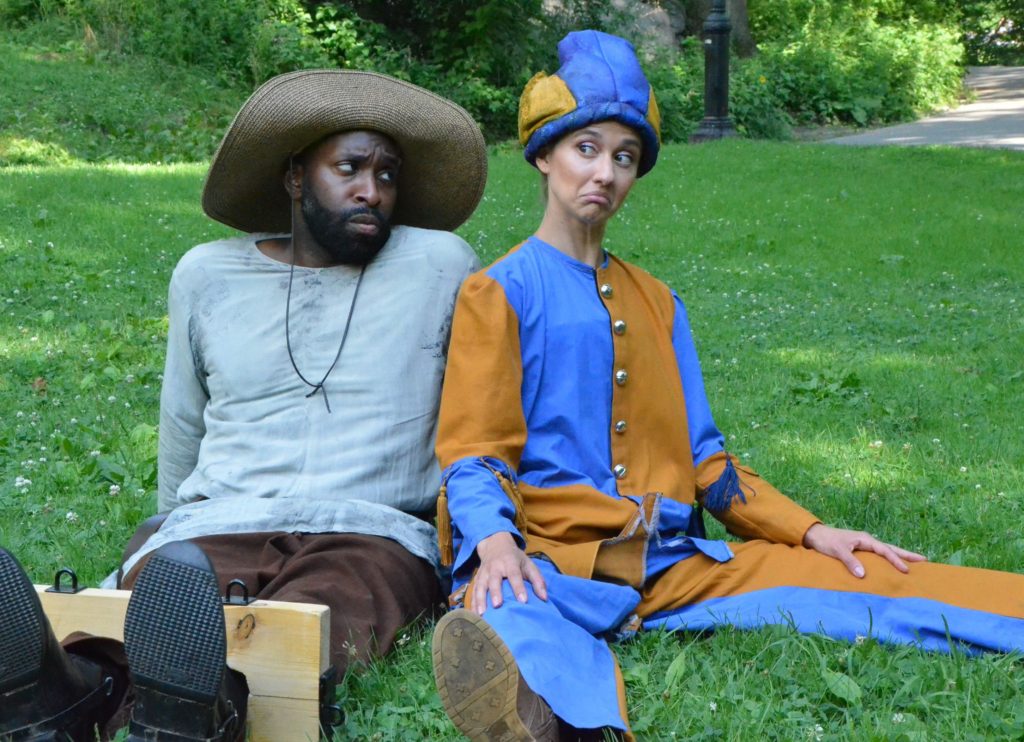 The Earl of Kent/Caius (Cedric Lamar) and Fool (Connie Castanzo)

Changing into court jester mufti, much as Kent (Cedric Lamar) does into Caius (dons a floppy hat) and Edgar (Linden Tailor) into Poor Tom (rends his garment), Cordelia becomes the Fool, comforting her beloved father who had wronged her. It will be difficult to erase the portrayal from memory during future “King Lear” sightings. Lear musing to the Fool “I did Cordelia wrong” takes on special poignancy. Ms. Castanzo is a poised, guileless Cordelia; her Fool is a blend of Ariel, Puck and a marionette…with jazz hands.

The play proceeds through Shakespeare’s salient plot points with his poetic discourse nicely rendered. Lear rages against the ‘frightful elements’ as his wits ‘begin to turn’ (effective in an outdoor setting); the nasty daughters, infused with bile by Jasminn Johnson and Aryana Sedarati, succumb to murder/suicide; and Gloucester (Nick Salamone), betrayed by his natural son Edmund (Amar Atkins), is led about by bastard son Edgar after his eyes are plucked out. (A squished grape is gratuitous. At least.) 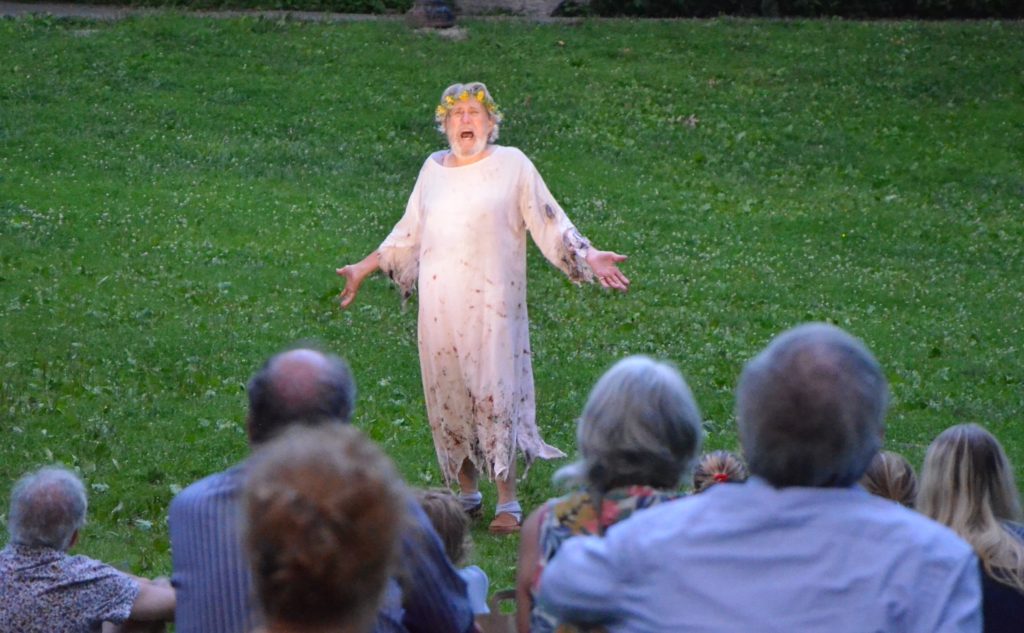 It all takes place on a Manhattan greensward in about two hours from 7PM, with portable lighting instruments warding off late evening shadows – and garbed in wardrobe supervisor Ashley Trutanich’s varietal Elizabethan costumes.

Then there’s the happy wrap: After the Brits ward off the French, Lear, his sanity restored, bestows his entire kingdom on Cordelia, who couples up to rule with Edgar (a mid-play clinch is a tipoff). Best is Lear’s exit line as he leads his co-father-in-law Gloucester off into the night. “Let us,” he says, “retire to a cool place of quiet contemplation.” That pretty much defines the park while NY Classical enacts the oddly pleasing version of Shakespeare’s deepest tragedy. An out-take it may be, but cool it surely is.

My next Lear, later this summer, will be Christopher Lloyd’s at Shakespeare & Company in Massachusetts. (With separate actors as Cordelia and the Fool.) Chris Lloyd and I appeared together in “Antony and Cleopatra” at the New Jersey Shakespeare Festival…in 1965. What goes ‘round comes ‘round.