Tradition holds that Queen Elizabeth I, enamored of Sir John Falstaff from Shakespeare’s Henry IV plays, asked the playwright to depict that character in love, and that he complied, writing “The Merry Wives of Windsor” in under a fortnight. Maybe she asked and maybe she didn’t, and maybe The Bard speed-quilled and maybe he didn’t, but the play got writ. Somewhat short of a masterpiece, it has nonetheless remained a comic touchstone for four hundred years and counting.

It’s been said that alterations and updates to Shakespeare generally do no harm, but neither do they shed new light. Jocelyn Bioh’s adaptation of “Merry Wives,” playing through September 18 at The Delacorte Theater in Central Park, sheds new and different light on the farcical warhorse. Transposing the only Shakespeare comedy set entirely in England to one set entirely in Harlem is an unexpectedly smooth transition. 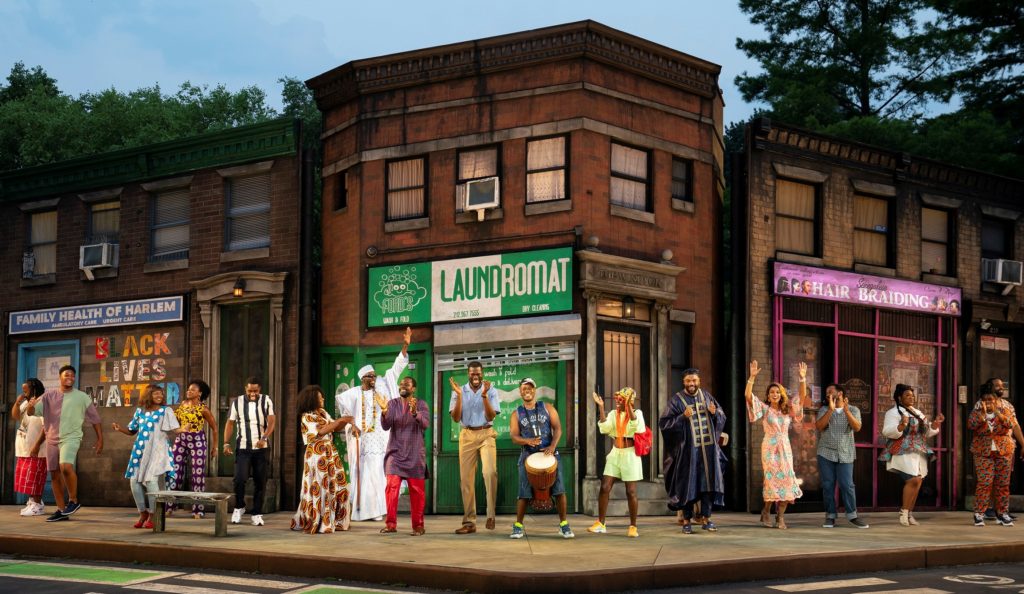 The depicted Harlem neighborhood is representative of the “African diaspora,” with people descendant from diverse nations intermingling to form a vibrant community. Adapter Bioh and director Saheem Ali have populated West 116th Street with men and women of Ghanian, Nigerian, Sierra Leonian and Sengalese descent and  Caribbean as well. Differentiated by accent and by costume, they nonetheless blend into a homogeneous cohort of New Yorkers.

Grounded in both Shakespeare and that diaspora, “Merry Wives” is respectful of the former and illuminating of the latter. Most of Shakespeare’s comedies are majority prose, as opposed to verse; “The Merry Wives of Windsor” is, in fact, nearly 90 percent prose, the most of any.  Ironically, Bioh’s “translation” into a combination of New Yorkese, Blackish and slang emerges more poetic than the source. Most of the accents tend toward hard vowels and clipped enunciation, which contribute to exceptional clarity. All, to my ear, are mastered. (How would a French-inflected Afro-New Yorker pronounce Anne Page? Aahn Paahj, of course.)

The show features about adozen actors and runs under two hours with no intermission. This cast demonstrates with alacrity of pace, pin-point timing and extraordinary teamwork that 100 minutes is the ideal running time. The plot, streamlined but intact, is just as funny (at least), and the stock characters, adjusted for time and place (and ethnicity), are just as ludicrous. It’s a win-win. 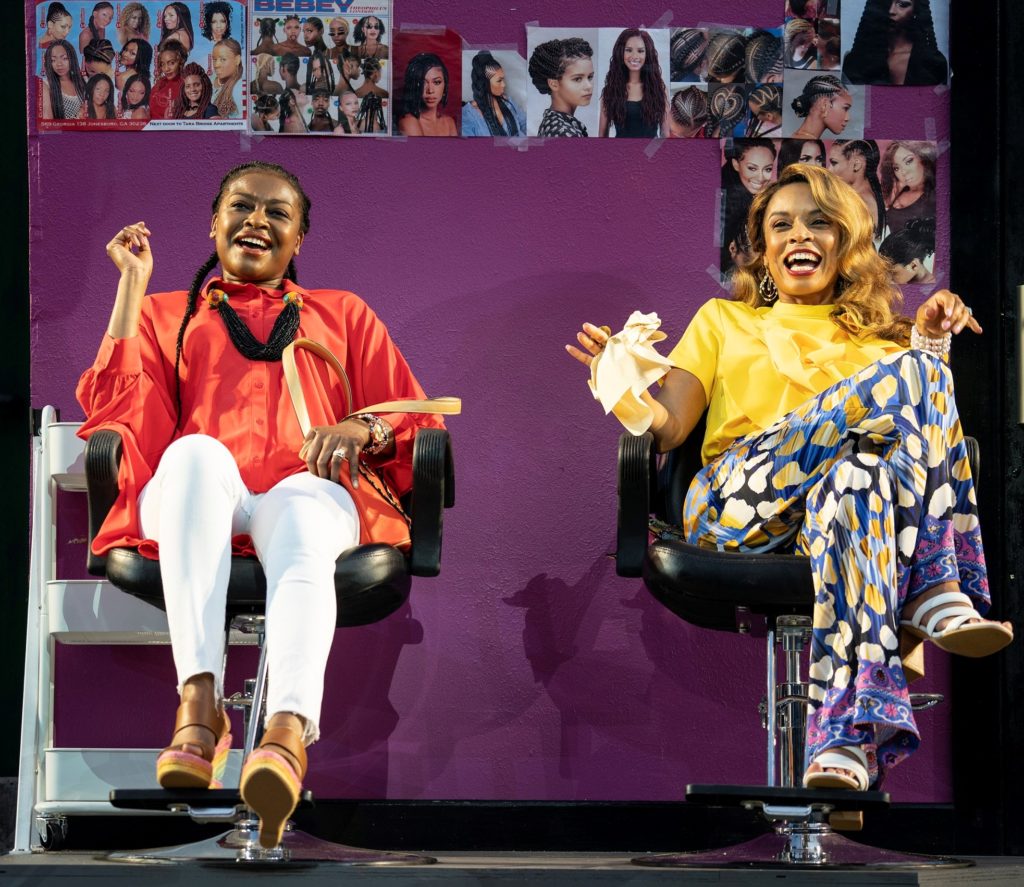 Johnny Falstaff, in the rotund person of Jacob Ming-Trent, sends identical love letters to Nkechi Ford (Susan Kelechi Watson) and Ekua Page (Pascale Armand), two married women who are not to be trifled with. Together, they conspire to entrap and emasculate the hapless would-be seducer. Their husbands, informed of Falstaff’s intentions but not their wives’ plan, react separately: Kwame Page (Kyle Scatliffe), trusting his wife, dismisses the threat; Nduka Ford (Gbenga Akinnagbe), unsure of Nkechi’s constancy, masquerades as “Brook” to gain Falstaff’s confidence. The resulting scenes range from dexterous wordplay – some  Will’s, some Jocelyn’s and some blended – and low-comic absurdity (Falstaff in a laundry basket). 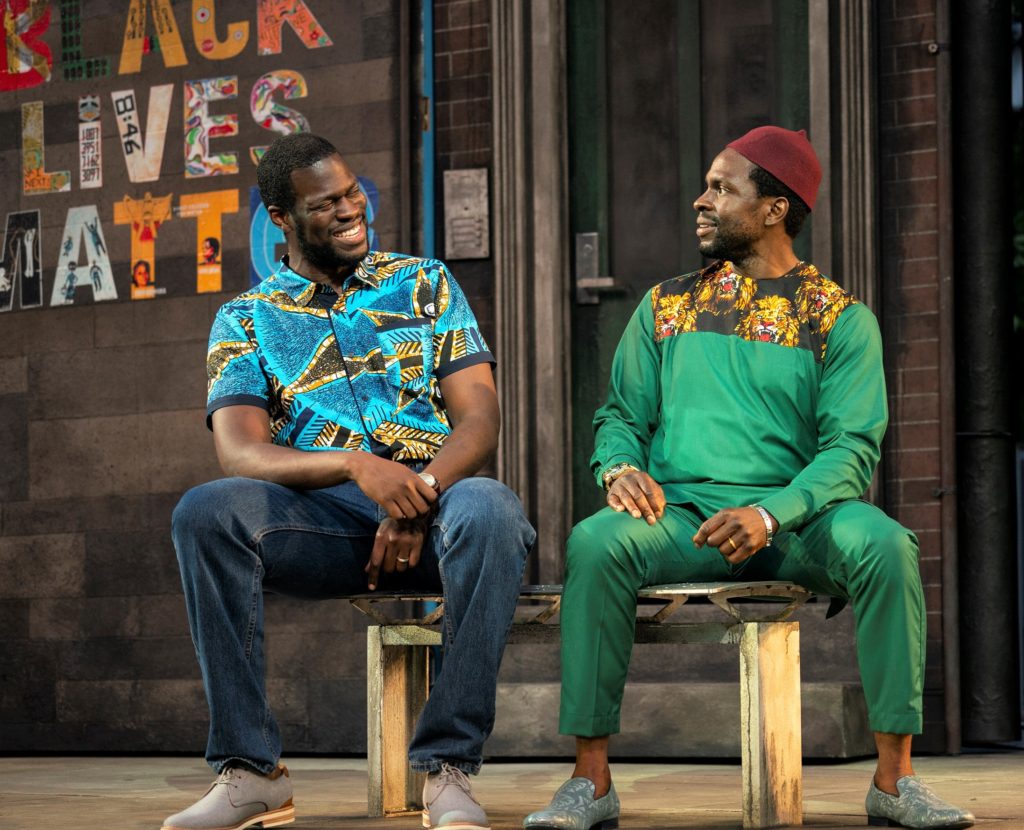 Director Ali’s quest for actors who could handle Shakespeare’s text and the Afro dialects while mining the comedy from both was a resounding success. In the cases of both merry wife actresses, Ali might have added fashion model to the requirements. The two women, smashing in designer Dede Ayite’s colorful outfits, appear to be having as good a time as are their characters. No less striking in appearance or performance are Scatliffe and Akinnagbe as their husbands.

Falstaff’s wardrobe is as shambling as is the character. Ming-Trent wears it well. Sad-sack Johnny’s self-deprecation is his redeeming feature. (A standup monologue with references to the pandemic, Netflix and Dumbledore is an odd insertion. It is amusing enough, but extraneous at best.) 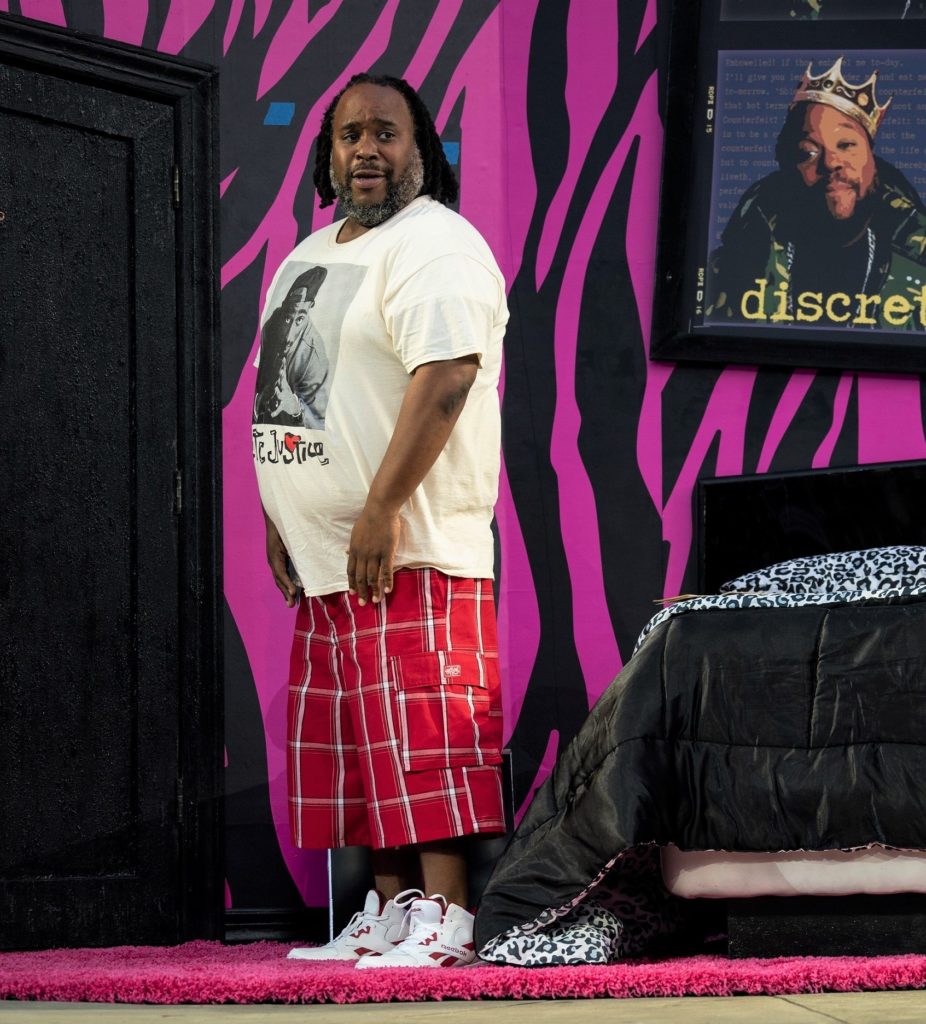 When Falstaff is duped into a late-night rendezvous where other-worldly creatures “pinch him and burn him and turn him about,” designer Beowulf Boritt’s realistic storefronts are pushed aside to reveal the backdrop: Central Park. With treetops swaying in the night breeze, Jiyoun Chang’s lighting effects dance among the leaves while choreographer Darrell Grand Moultrie’s joyous wedding celebration plays out. The effect is breathtaking. 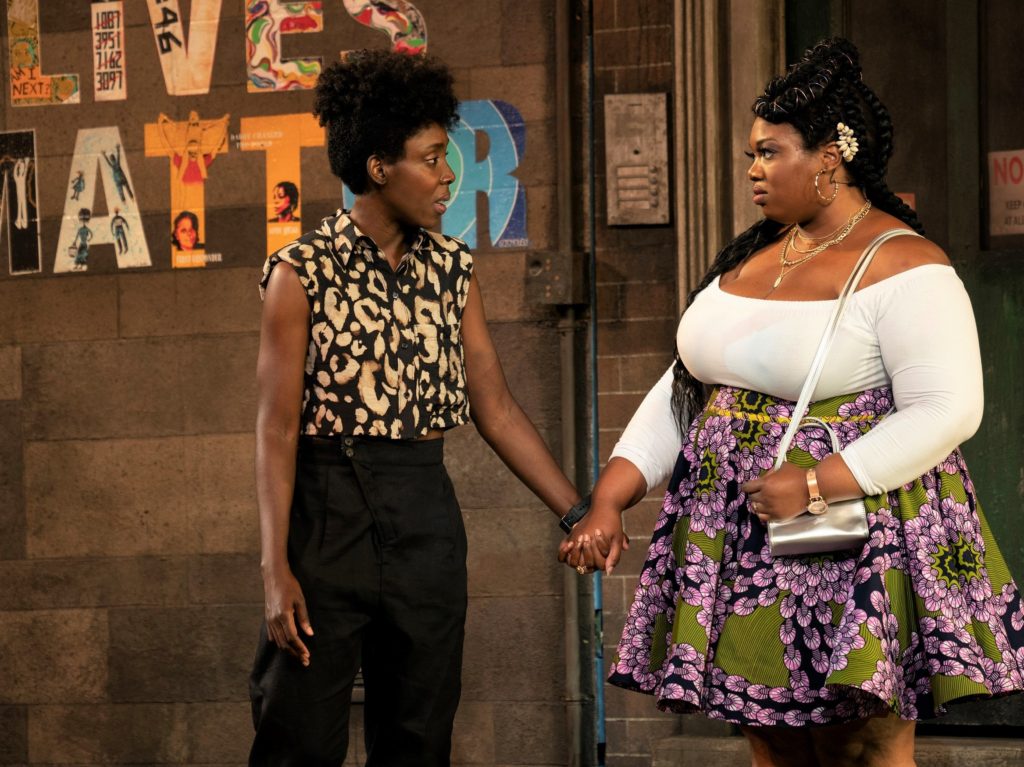 In more than a few instances, the juxtaposition of Shakespeare’s text with Bioh’s adaptation approaches perfection. When Anne Page, for instance, having married Fenton for love, confronts her parents, each of whom had wanted her to marry  other suitors, mom and dad accept her choice. When Anne shows up married to Fenton, Shakespeare wrote for her father to speak to the couple: “…heaven give you joy. What cannot be eschw’d must be embraced.” Anne’s mother adds “Heaven give you many merry days.” While those lovely lines are intact, two of Bioh’s adjustments stand out. For one, papa Page’s hearty “Welcome to the family.” For the other, this Fenton, Anne’s spouse-of-choice, is a woman. Welcome back, Public Theater, to live production. And welcome, “Merry Wives,” to the twenty-first Century.

Performances at 8PM Tues-Sun through  September 18 at Delacorte Theater in Central Park (81st St./Central Park West).  Tickets, which are free, are distributed this year via a Goldstar advance digital  lottery. See details at www.publictheater.org or www.goldstar.com