The Gershwins and Oscar Wilde Live On Stage! What’s not to like…

As ‘S Wonderful as “Who Could Ask for Anything More? The Songs of George Gershwin” is as it stands, and it truly is, I would suggest one change: adding George’s principal lyricist, his brother Ira, to the (already long enough) title. In Barrington Stage Company’s exhilarating tribute to the Gershwins’ American Songbook, five exceptional singers honor George’s incandescent melodies with pitch-perfection while also using Ira’s sublime lyrics to elevate the concert into real Theatre. (The whole enterprise having been co-conceived and co-directed by BSC artistic director Julianne Boyd and musical director Darren R. Cohen undoubtedly contributed to that result.) 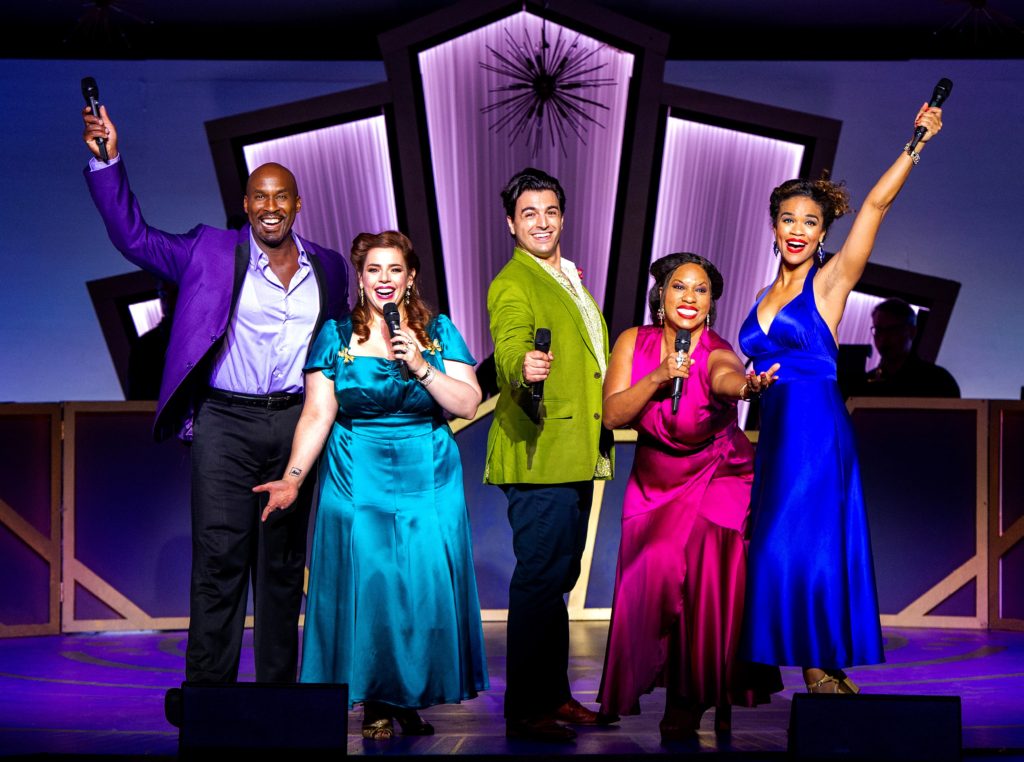 Staged outdoors in a spacious tent (a perfect setting, pandemic or not), the five performers, backed by five terrific musicians, explore twenty-five Gershwin compositions excerpted from ten different shows and movies. From the haunting opening strains of “Rhapsody in Blue” to the ensemble singing of “There’s a Boat That’s Leavin’ Soon (for New York),” an apt closing number (from “Porgy and Bess”), the eighty-minute avalanche of mostly-familiar classics is a delight.

Highlights tumble out one after the other, beginning with the apropos “Love Is Sweeping the Country” (from “Of Thee I Sing”): Britney Coleman vamps her way through “’S Wonderful” and later gets all racy on us with “Naughty Baby.” Alysha Umphress entices with “Embraceable You” (“Girl Crazy”) and finesses “Do It Again,” from the obscure “The French Doll,” by poking fun at its pre-#MeToo lyrics. (“I may say no, no, no; but do it again.” Sheesh. But it works.) Jacob Tischler teases the audience with “Somebody Loves Me” and builds a “Stairway to Paradise” with Ms. Coleman (both songs from “George White’s Scandals”). 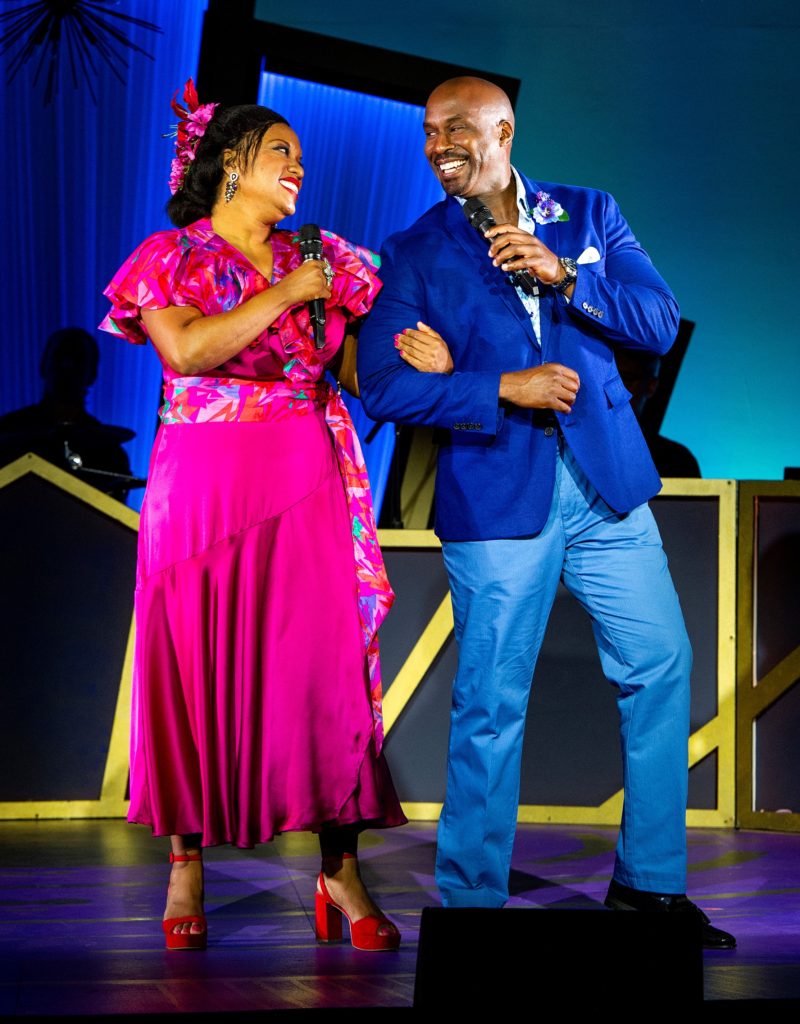 Allison Blackwell, whose Broadway debut was in the 2012 revival of “Porgy and Bess,” delivers a resonant “Summertime” from that show (with one sensitive lyric adjustment). Ms. Blackwell, who starred as Violetta in the “La Traviata” scene of the 2018 “Pretty Woman” musical, is a coloratura to reckon with. And Alan H. Green lucks out: not long after he’s “Bidin’ My Time,” “Love Walked In.” 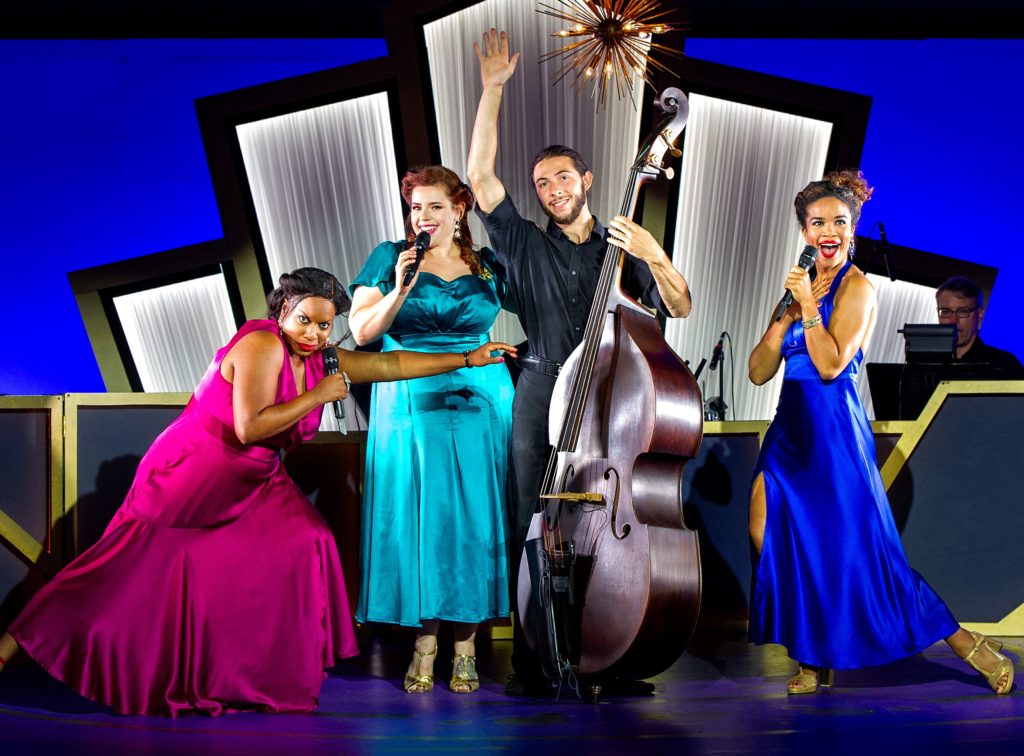 The smartly arranged ensemble numbers, notably “Fascinating Rhythm” and “I Got Rhythm,” are outstanding. Choreography (Jeffrey L. Page) is minimal, but the performers are all smooth afoot. Subtle pastel lighting (David Lander) is soothing, and Sara Jean Tosetti’s  costumes…well, check out the pics.

I missed Barrington’s Rodgers and Hammerstein mash-up last year, but based on George & Ira’s, count me in for whomever is next: Cole Porter?  Lerner and Loewe? Sondheim? Please.

In a modern play about 19th Century playwright Oscar Wilde, the character says “I have spent my life making language shimmer.” Nowhere do words shimmer more than in Wilde’s delicious comedy of manners, “The Importance of Being Earnest.” Perhaps the wittiest, and certainly one of the funniest plays in the English language since Shakespeare, “Earnest” was the ideal choice to open Berkshire Theatre Group’s 2021 season, now underway in those rolling Massachusetts hills.

Indoors and at full audience capacity (masked as per Actors Equity), the mood is upbeat even before lift-off. And lift off this buoyant “Trivial Comedy for Serious People” (Wilde’s own sub-title) does. Under the direction of David Auburn, himself a renowned playwright (Pulitzer-winning “Proof”), it does not miss a farcical beat or let slip the play’s flourishes of melodrama. “Earnest” is perfectly constructed. Built around false identities, chaste courtships, unexpected visitors and, oh yes, a foundling in a handbag, the action culminates in an outrageously improbable – and hilarious – resolution. 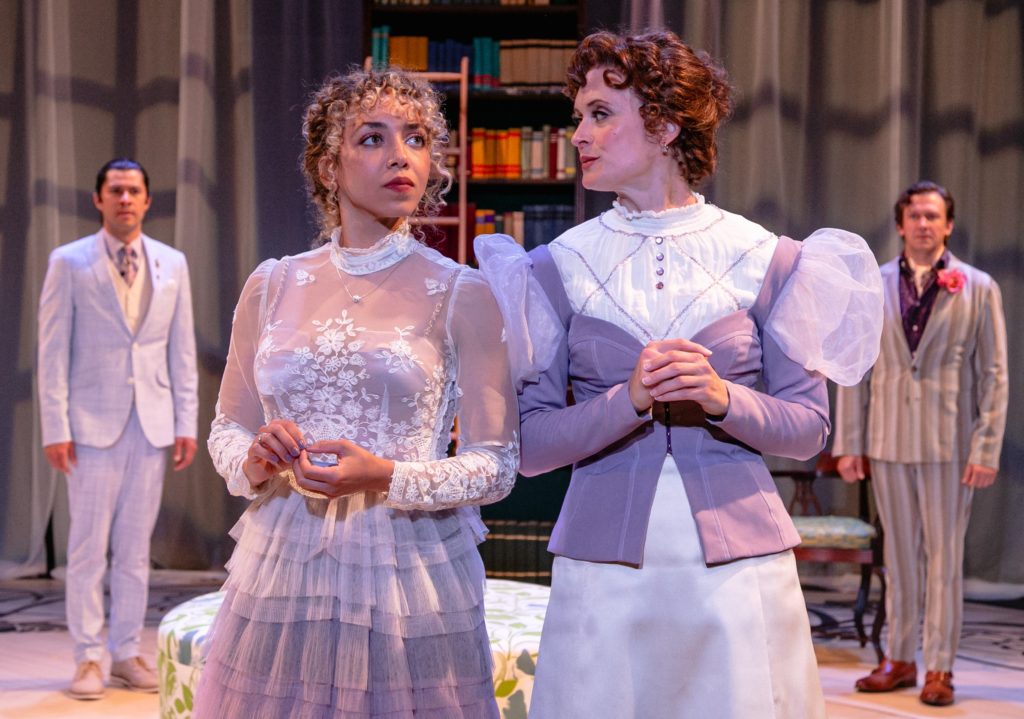 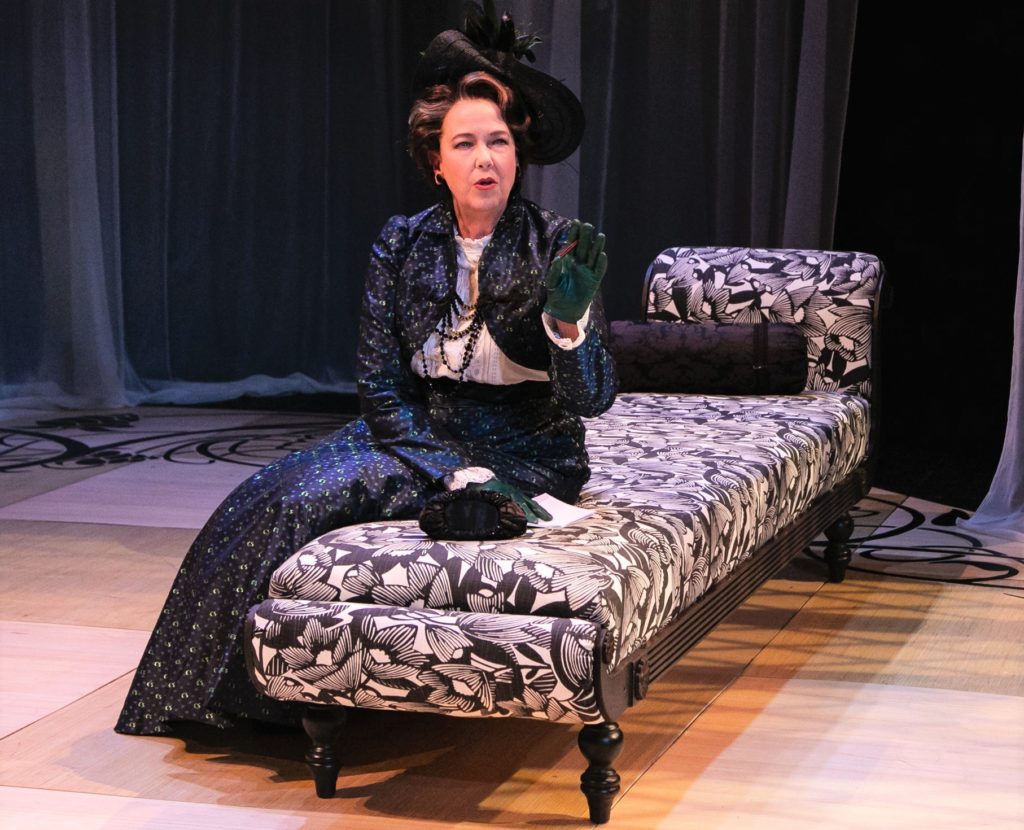 While many Wilde aficionados likely consider Lady Bracknell the avatar, she is actually fifth in line-count to the four romantic leads, with fewer, in fact, than half the lines of either would-be Ernest.  This is not to disparage the role; witty as is the whole of “Earnest,” Wilde blessed Lady Bracknell with, line for line, more zingers than the others. (Upon learning that Jack is an orphan: “Losing one parent is unfortunate; losing both seems like carelessness.”)  There is a tendency to over-play her caustic quality, which gets laughs but skews the balance of her scenes. Here, accomplished comedic actress Harriet Harris is self-possessed, to be sure, but over-play she does not. A level or two less than the ‘gorgon’ that Jack describes, Ms. Harris is a generous Lady B. Not just to the other characters, who nonetheless dread her wrath, but to the other actors, who are more evenly matched and even funnier than I recall from other productions. The two suitor men, Winter and Fagan, play exceptionally well off each other.

In the play, a character comments on a line just spoken: “It is perfectly phrased,” he says. No assessment of Oscar Wilde’s 1895 masterpiece could be more accurate – or more descriptive of BTG’s elegant production. Their “Earnest” is consistently amusing, pictorially pleasing, and entertaining through-and-through.