Dream Along With En Garde Arts

Considering, as Rehena Mirza’s disembodied voice intones in her segment of “A Dozen Dreams,” that nothing is more boring than hearing about someone else’s dream, you would think a gaggle of dreams, assembled into an “immersive theatrical installation” would be an endurance test. Not so.

What saves the unique En Garde Arts presentation from that destiny is its brevity and variety. Clocking in at just under sixty minutes, “A Dozen Dreams” delivers what it says: twelve of someone else’s dream, each one too brief to bore. (Do the math.)

Invited by En Garde Arts founder and artistic director Anne Hamburger to share their pandemic dreams, a daunting dozen playwrights (all women, hardly by chance) contributed pieces that range from airily poetic to sternly assertive, some more pandemic-related than others. (And, frankly, some more engaging than others.) Regardless, each is richly enhanced by four other women: co-conceiver Irina Kruzhilina’s evocative physical design, revelatory projections by Brittany Bland, mood-enhancing lighting (Jeanette Oi-Suk Yew), and multi-tone sound (Rena Anakwe). Thus enriched, “A Dozen Dreams” emerges as more than the sum of its parts. 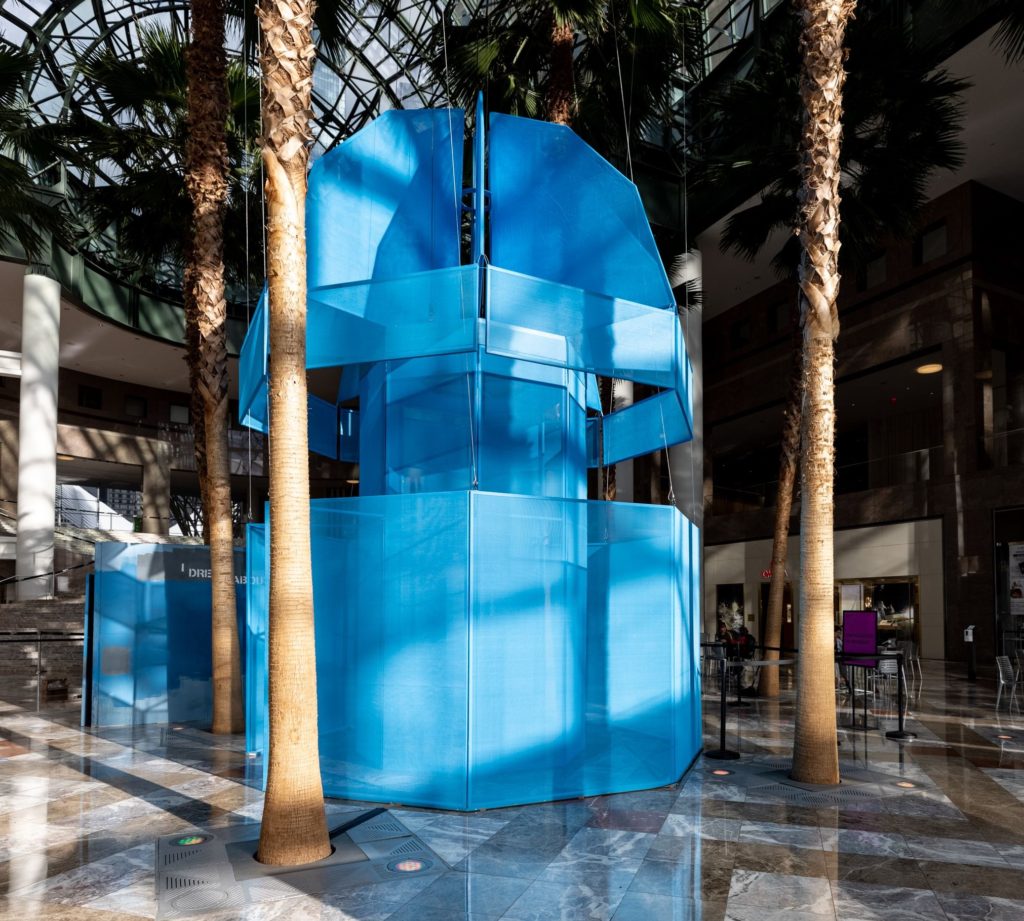 Planted in the center of the Brookfield Place atrium on Vesey Street in lower Manhattan’s seaport area, a royal blue enclosure is the welcoming center, from which attendees are directed across the hall into a maze of individual performance spaces. Each virtual “Dream” is played anew for each audience (two people max), who listen through sanitized headphones and are directed from one to the next. Separated by ten minutes from the preceding and following attendees, one is, in a sense, granted a private viewing. No, it is not flesh-and-blood live; still, it is a distinctly personal experience. 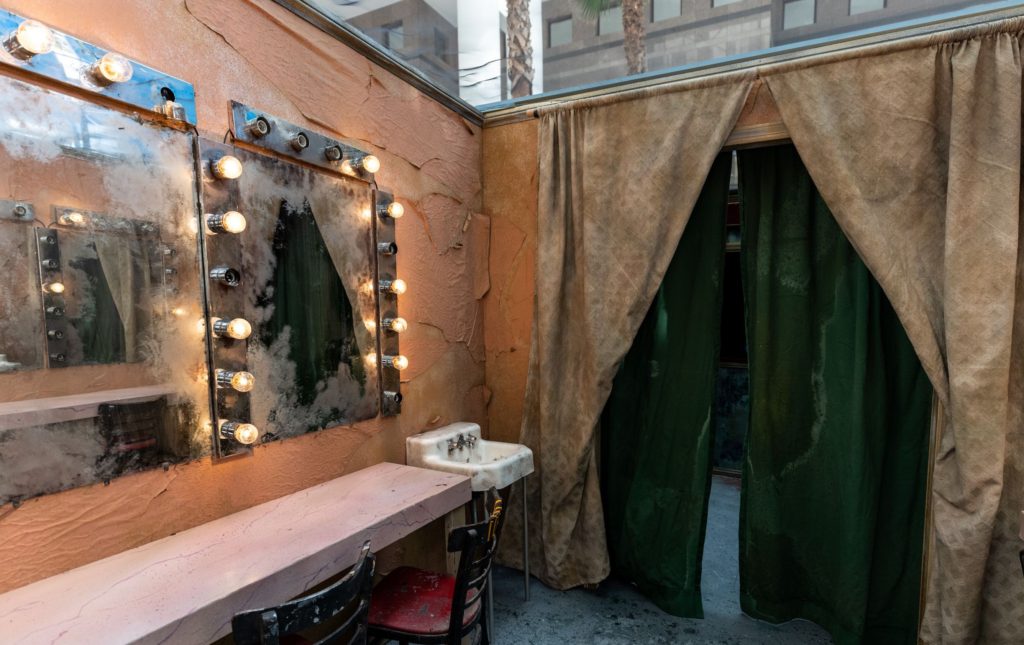 Let’s get this dressing room cleaned up by September, guys.

After the introduction to “a labyrinth of memories” in which “YOU are the actor,” the first scene is set, appropriately, in a disused backstage dressing room. Ellen McLaughlin dreams of “The First Line” of a script that will eventually, post-pandemic, not “seem to be made of oatmeal.” Soon, soon, Ms. McLaughlin. Hang in there.

Next, Andrea Thome keeps returning in her sleep to her childhood house, which her parents sold. “I didn’t want them to,” she recounts in “House Dreaming.” “In my sleep, even my subconscious went on omission to keep the house.”  She had read that if you kiss four walls of a place, you will return to it. The last time in her house, she kissed every wall of every room. (The concept of one’s subconscious going on omission is a keeper.)

Mona Mansour’s dreaming of young adulthood is near-universal (don’t we all). Her topics include recollections of her first job (as a nanny), her high school prom and – wait for it – after-prom hotel sex! (Just her friend’s, alas, but still, a worthy eavesdrop.)

In “As Hard As You Can,” Ren Dara Santiago dreams about finding a core of love within herself. The challenge here is to avert your gaze from her mesmerizing visage. 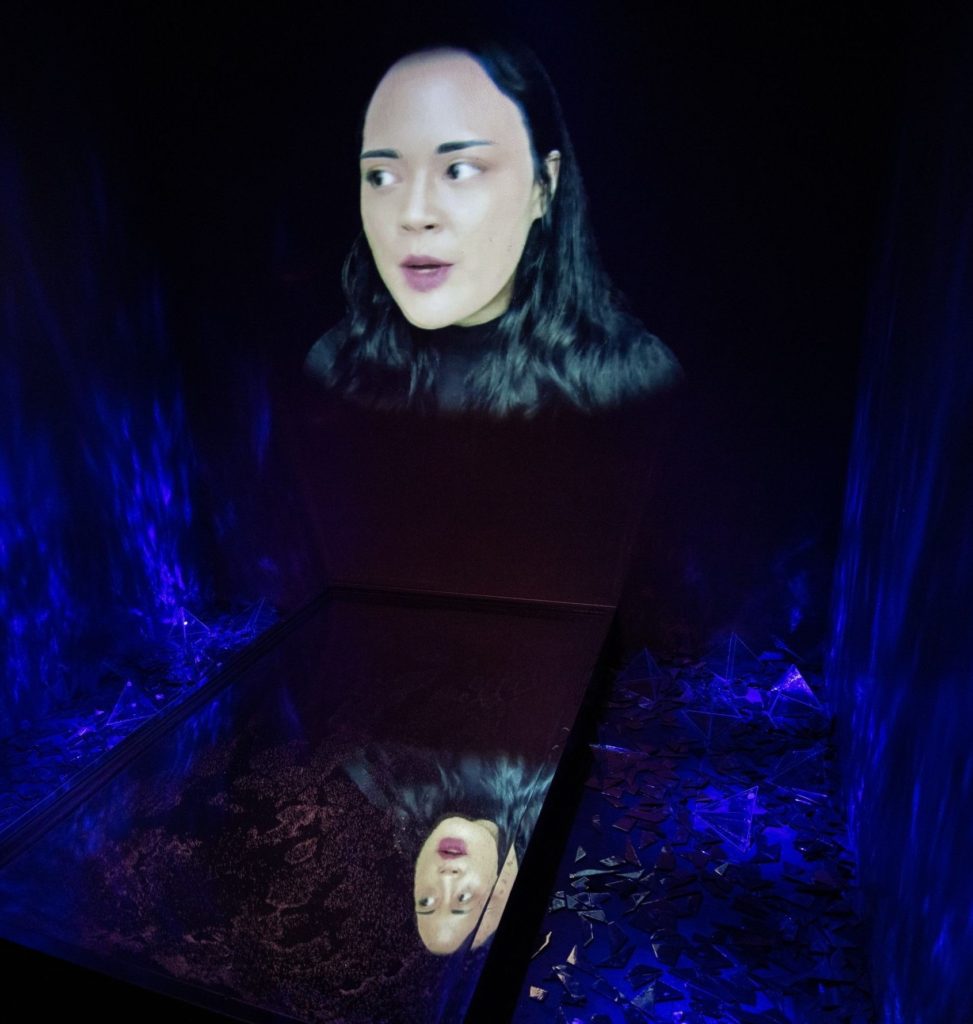 In “The Death of Dreams,” Rehena Mirza follows up her “boring” comment (above): “Having one of my dreams is SO boring I wish someone were telling me theirs.” But her dream of repeatedly packing and moving, based on the actuality of her COVID-forced move to her husband’s hometown is both realistic and amusing. “Right now, the place where we all should be doesn’t exist yet.”

Caridad Svich’s dreams begin at 3:30AM, “the witching time of battered sleep…,” (another keeper phrase) when she harks back to the origin of life. Her “Under the Moon” is aptly titled.

In “Fallin’ Choppers Make a Mouf Real /Sharp-,” Erika Dickerson-Despenza dreams of “talking to God…in slumber…”  The tubular set pieces might represent teeth, the press notes suggest, or organ pipes, but it felt to me as if I were inside a heart – maybe hers, but my own pulsed in time with the percussive accompaniment. 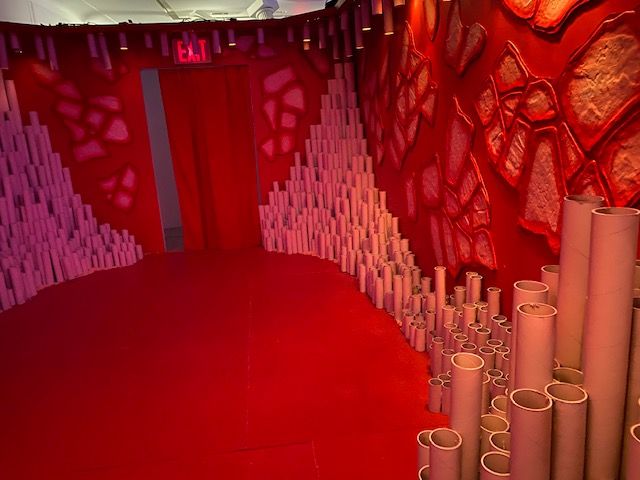 At the heart of Erika Dickerson-Despenza’s dream. [Photo: Scene on Stage iPhone]

Martyna Majok’s “Pandemic Dreams” skirts the nightmare boundary. Barely. Some of its deep, dense family-memory images are disturbing. “Your body falls up…you aren’t even in your own dream.” (Ms. Majok was awarded the 2018 Pulitzer Prize for Drama for her play “Cost of Living.”)

Liza Jesse Peterson’s “My Dream in this Moment” is a fierce litany of injustices perpetrated against people of color.   “I really dream of white supremacy crumbling to smithereens, in a pile of rubble…not if, but when.” A time when “Black children will know…their skin is God’s gift wrapping…”  Ms. Peterson does not waste a second of her four-plus minutes. 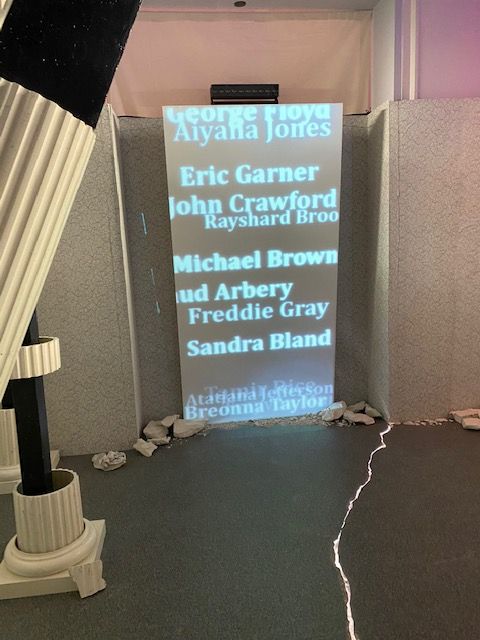 “The names…the names, so many names I’ve had to swallow…and carry inside me.”  [iPhone]

Sam Chanse, in her “Secret Catastrophe,” sidesteps. “it’s been hard for me to dream lately,” she says, “because it’s been hard for me to sleep lately…it’s been like one single long-ass day.” You nailed it, Sam! (She does relate one about looking sideways out the ground-level window of a fallen skyscraper. A woman of unusual perspectives.)

In “Back to the Country,” Lucy Thurber hopes and wishes that when this “strange, broken, scary,  frightening, hurtful time” passes, some positives will remain. Fewer planes in the sky; air somehow cleaner, better on her skin; more silence; the stars looking brighter. Even “live Zoom meetings” are among her favored assets. This Lucy is a far cry from Van Pelt.

The colorful image from “Back to the Country” [iPhone]

“A Dozen Dreams” leads back to the gauzy blue installation for Emily Mann’s “Spirit Dreams,” in which she recalls, in affectionate terms (“…it was a glorious feeling.”), Kecia Lewis’s entrance in “Betsy Brown” from 1991. Kecia, in response, sings an elegiac song adapted from the Old Testament book of Amos 9:13-15. (Behold, the days are coming, says the Lord.) 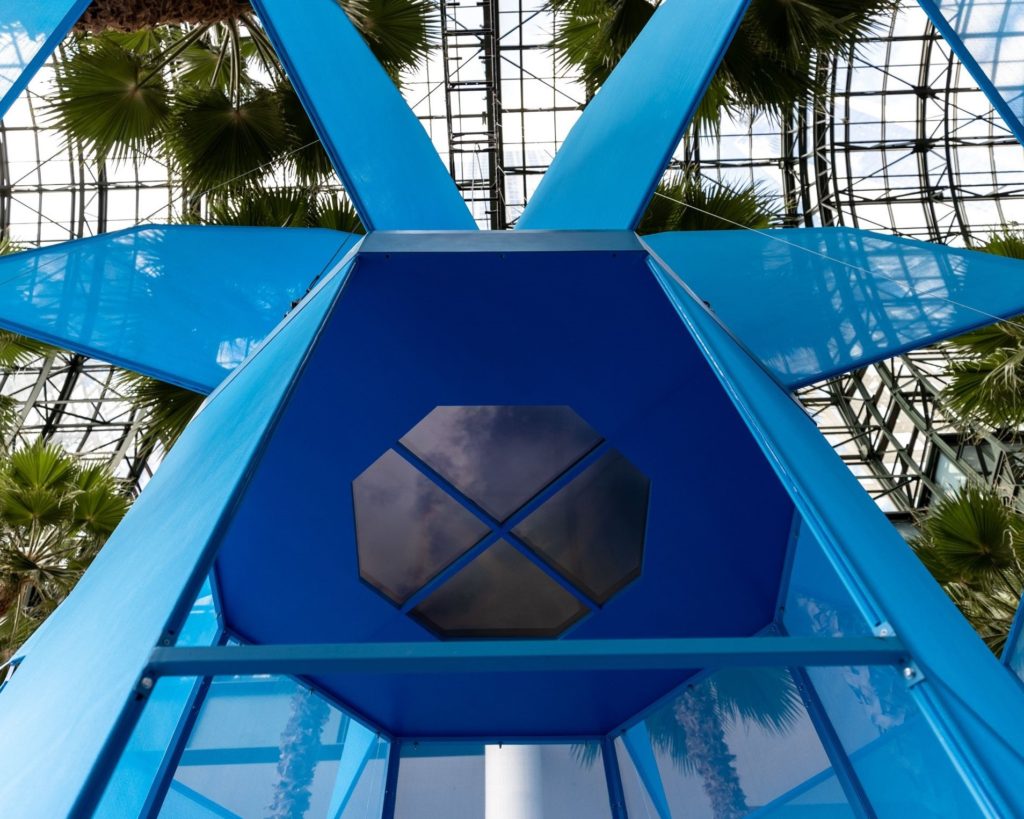 On this plaintive note, we are reminded that dreams are unlimited, and as “A Dozen Dreams” concludes, a soothing voice intones “Two dozen, Three dozen…Seven dozen, Eight dozen…” as the voice fades out.

“A Dozen Dreams” continues through Sunday, May 30 at Brookfield Place, 230 Vesey Street, NYC, with entry Wed. – Sat. from 2:00pm to 7:20pm and Sun. 12noon to 4:10pm with reservations during those times available at www.engardearts.org. One to two people are admitted at ten-minute intervals and tickets are free of charge. (Voluntary donations are accepted.)

Note that the settings pictured above are contained in relatively small compartments. The visual and sound contributions of the four-woman design team cannot be over-praised.