In recent months, with Covid-19 restrictions eased in some relatively low-affected areas, I have tracked down three theatrical attractions (all with pandemic protocols). In August it was “Godspell,” the nation’s first outdoor (tent enclosed) Equity-authorized production since the pandemic closings, at Berkshire Theatre Company in Pittsfield, Massachusetts. In September, “The World Goes ‘Round” and “Little Shop of Horrors” ran in rep indoors at Weathervane Theatre in New Hampshire, and on November 1, I attended the first public viewing of “The Right Girl,” a new musical with its sights on Broadway, indoors at Barrington Stage Company, also in Pittsfield MA.

Okay, that last one was not live. Thwarted by the shutdown, “The Right Girl” presented as a Zoom-recorded screening. Labeled a “reading,” the Zoom-film was so artfully produced and performed that it seemed like the cast was right there on the stage. Which, following the screening, several of them were, along with director/choreographer Susan Stroman, whose attachment to the project invigorates it even before the first musical note is sounded. 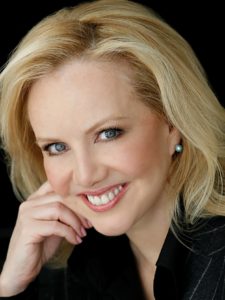 While readings of new works are not subject to reviews, Ms. Stroman gave me leave to write about this one, acknowledging that adjectives might find their way into the piece.

“The Right Girl” is inspired and co-written (book) by Louisette Geiss, a lead plaintiff in a lawsuit against imprisoned former Hollywood producer Harvey Weinstein, who, she has said, ruined her career following a 2008 sexual harassment incident. The story follows (fictional) movie studio executive Eleanor Stark (Robyn Hurder, current Tony nominee for “Moulin Rouge”), who, while not herself victimized, becomes increasingly aware of pervasive abuse of women by male entertainment industry powerbrokers. A dozen of those executives are represented in the piece by Eleanor’s boss/mentor, a composite serial abuser, played by Tony Yazbeck (2018 “On the Town” revival), whose management technique is summed up by “You are in charge of what I say you are.” The circumstances and after-effects of the abuses are based on interviews with more than twenty victimized women; a substantial portion of the dialogue is, in fact, ver batim. “The Right Girl” is not the easiest show to digest or describe: While the terms “abuse” and “abuser” thread through this account, they must not minimize the extent or severity of the exposed incidents, that range from various degrees of harassment up to and including forcible rape. 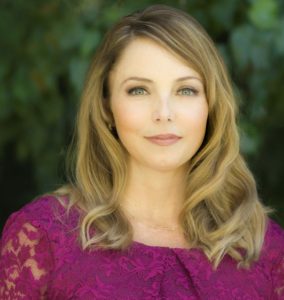 I sense some raised eyebrows: A musical? Really? But this was not a slapdash decision. Besides five-time Tony Award-winner Stroman, the creative team includes producer Howard Kagan (Broadway’s “Natasha, Pierre and the Great Comet of 1812”) and composer Diane Warren, whose resumé includes eleven Oscar nominations for Best Original Song, including “I’ll Fight,” from “RBG,” and thirty-two Billboard Top Ten hits. She put the question to rest in a recent interview: “Live theater,” Ms. Warren said, “allows us to laugh, cry, and examine uncomfortable messages, all while managing to entertain us.” She went on: “I’ve always believed that anything worth saying is worth singing about.” (Quibble with that? Then toss out half of both Verdi and Sondheim.) 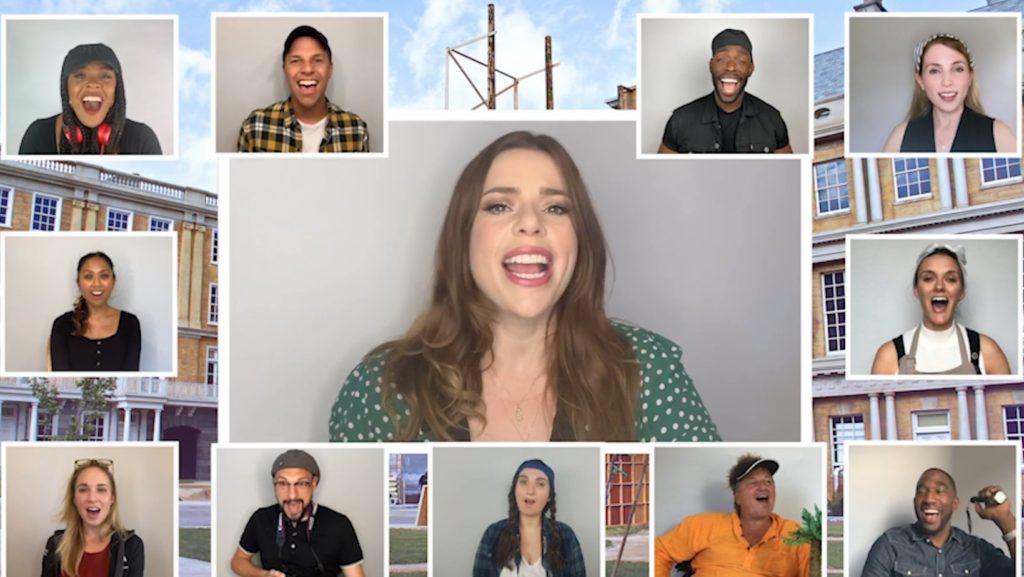 My wonder at technology is admittedly at a low bar, but this presentation bordered on wizardry. Nineteen actors Zoom-recorded their dialogue and songs separately over two weeks in June, and those tracks were synced with one another and with recorded orchestral tracks. The resulting nearly two-hour film was seamless. Conversational exchanges betrayed no separation; musical numbers, including fast-tempo ensembles, matched up perfectly; and the concept of distance was made clear or not, depending on context. When, for example, separate Zoom boxes best suit the material, they are sharply defined, with matting that complements the virtual setting, as in the screenshot above. In  two-character scenes (Tony Yazbeck and Polly Baird, below), the border is blurred out. 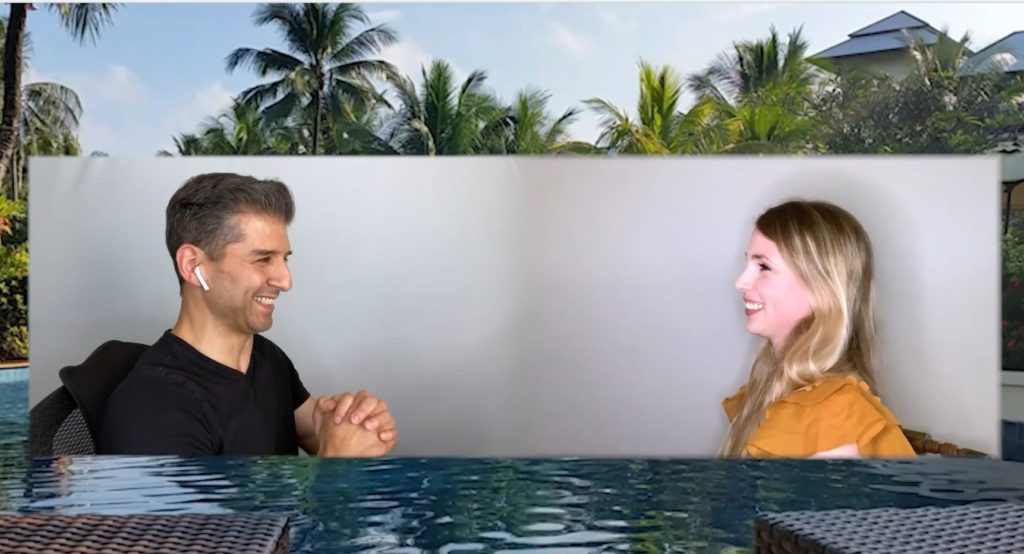 Warren’s songs, with lyrics by her, Geiss and Kagan, are of a piece. The numbers propel the plot and elucidate the characters, whose eventual self-assurance is inspiring. “So many times I played by someone else’s rules…” is an early lament; “Who Says You Can’t Have It All” comes later; and fittingly, “The Right Girl” eleven o’clock number is “You Fucked with the Wrong Girl.” 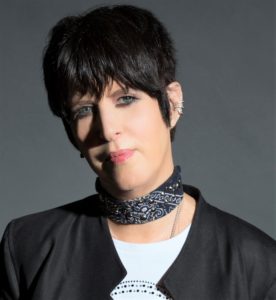 There is a lot to learn. You read the papers and hear about lurid deeds on cable TV, but, as one lyric has it, you do not know “till it happens to you.” A victimized woman is advised to forget it and move on: “Forgetting becomes more painful than remembering,” she says. Another asserts that “It’s not closure; it’s like bleeding out.” An actual survivor, speaking at the talkback, has been “paralyzed for twenty years.” And, for those who fault women for agreeing to, for example, hotel-room meetings: “It doesn’t matter how the victim got there.”

There is not (yet) much humor in “The Right Girl,” nor was our audience predisposed to laughter, but sardonic byplay among the women is amusing, and sly humor lurks in some lyrics. An extended ensemble rap is killer-rhymed. 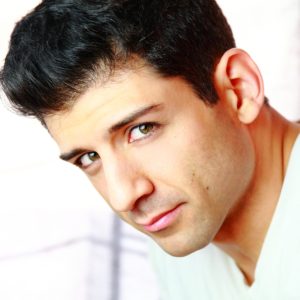 Tony Yazbeck (Not a bad-looking fella’.)

I asked about the casting of Yazbeck instead of a more you-know-who type. “They didn’t all look like Harvey,” Stroman said. And a judge’s remark that “not a bad-looking fella” would not need to use threats or force is lifted from an actual trial transcript.

According to producer Kagan, the show will be dance-heavy. The choreography, not attempted on Zoom, is in the works. “Susan has it in her head already.” As she herself pointed out, it takes a village to put a musical together. I mentioned that the songs, the women’s relationships, and the entertainment-industry setting are begging for her choreography. “Just wait until you see it on stage,” replied the woman who created the human bull fiddles in “Crazy for You.” So we wait. Not like we have a choice, right? Meanwhile, Stro gets my vote for Mayor of “The Right Girl” village.