I have long been aware of the existence of Hudson Guild Theatre Company, but until I was encouraged to watch their virtual world-premiere production of “A Five Mile Radius,” I had never seen their work, nor did I know about their parent organization, the Hudson Guild.

Based in and primarily focused on Manhattan’s Chelsea neighborhood, the Guild, founded in 1895 as a boxing club for “young, rowdy boys,” seeks “to empower individuals and families to achieve their highest potential.” Programs include Adult, Youth, Children and Early Childhood services, directed toward “those in economic need” among a wide cultural, ethnic and racial constituency.

Hudson Guild Theatre Company was formed in 1994, with the stated aim of providing opportunities for people in the Guild’s community to experience live theater as active participants and as audience members. Guided by professional theater artists, they have presented some 65 productions, including “streamlined adaptations” of classics, Shakespeare among them; modern works by such as Tennessee Williams and August Wilson; and new works such as the one now Zoom-streaming. 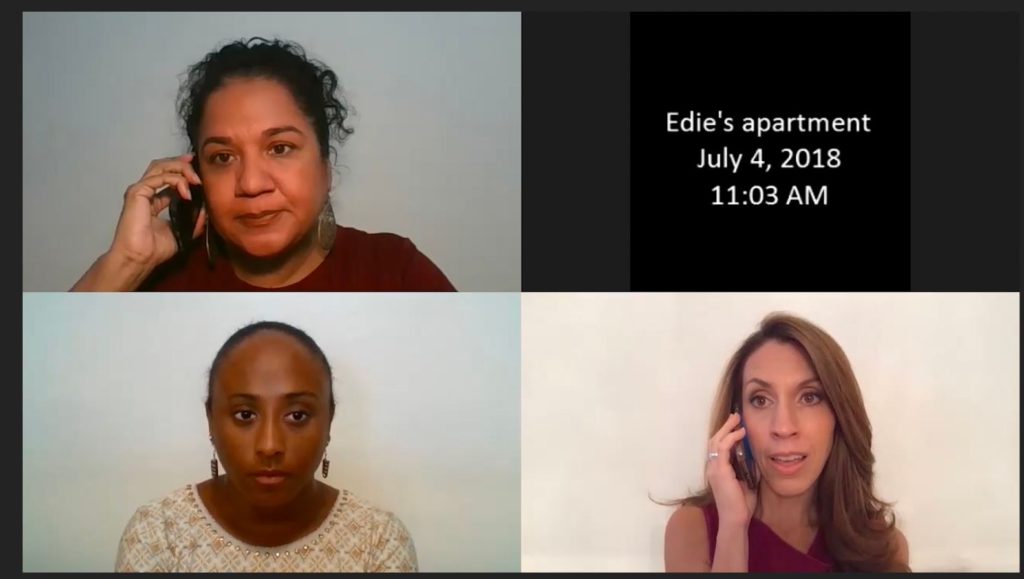 While the twelve cast members of “A Five Mile Radius” may be “locals” – and talented ones, I hasten to add – the playwright and co-directors list considerable credits. Playwright Tasha Partee has been produced by Primary Stages and Manhattan Rep as well as having danced in and choreographed a variety of musicals. Also an educator, Partee received Broadway League’s 2019 Inspiring Teacher Award. (Her bio also reveals that she is a former NFL cheerleader for the Baltimore Ravens, a credit that demands to be included here.)

“A Five Mile Radius” is set on July 4, 2018 in a Staten Island apartment complex, where seven-year old Brandon is killed by a bullet that was apparently shot into the air during an Independence Day celebration. The title refers to the distance the bullet might have traveled, depending on the angle of the discharge, wind speed and other factors. Within a confluence of location and relationships, the investigation is left to internet food-blogger Edie (Stacey Wright) and Edie’s assistant Caitlin (Michele Quintero), who is also her “ghost Tweeter,” an inspired image. 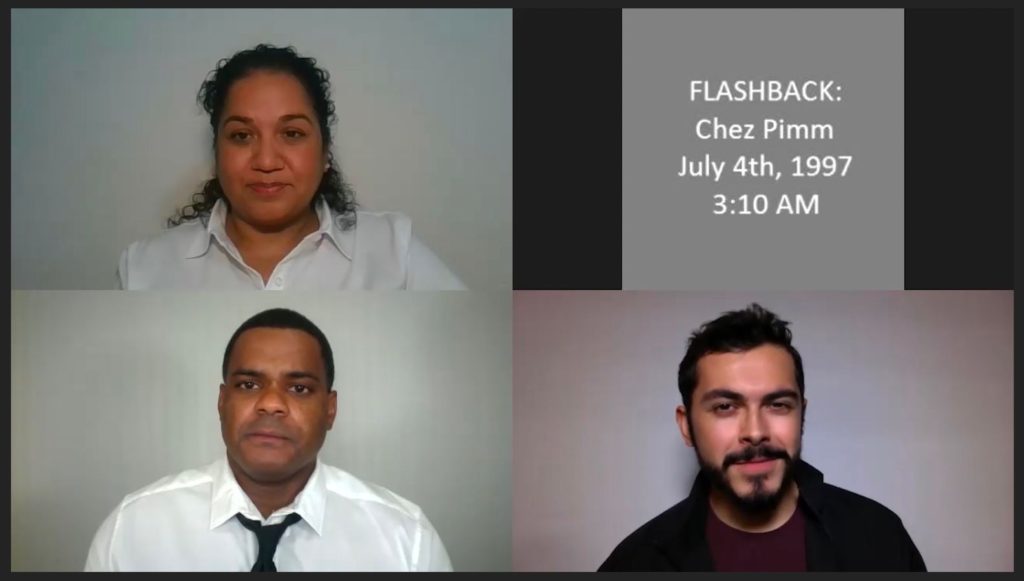 Edie and Caitlin are women of color; Brandon and his mother (Danielle Patsakos) are white. Much of the social and racial tension that arises out of the incident is standard stuff, but a couple of factors elevate “Radius” above the obvious: For one, young Brandon was an admirer of Edie and what she insists is her “publication,” not blog. (I know the feeling.)

And, tellingly, posting Brandon’s victim-pic for a prayer vigil (while the Food Network is considering hiring Edie) is clouded by an item of Brandon’s apparel: “Look at his hat,” Caitlin warns. “We’re talking about a little boy, here,” says Edie. “No one’s gonna care about a stupid hat.” “It’s not just a hat and you know it.” They do post the photo on Edie’s publication (not visible on Zoom), with the expected blowback, but while the hat remains a significant issue  throughout the play, not once is it ever described further than those lines above. They all know – Edie, Caitlin, a neighborhood restaurant’s manager (Manuel Estevez), chef (Kim Gardner) and waitress (Ashley Woolcock), and others. And so do we. It is a bold and effective device by playwright Partee, who also portrays an unctuous TV reporter. 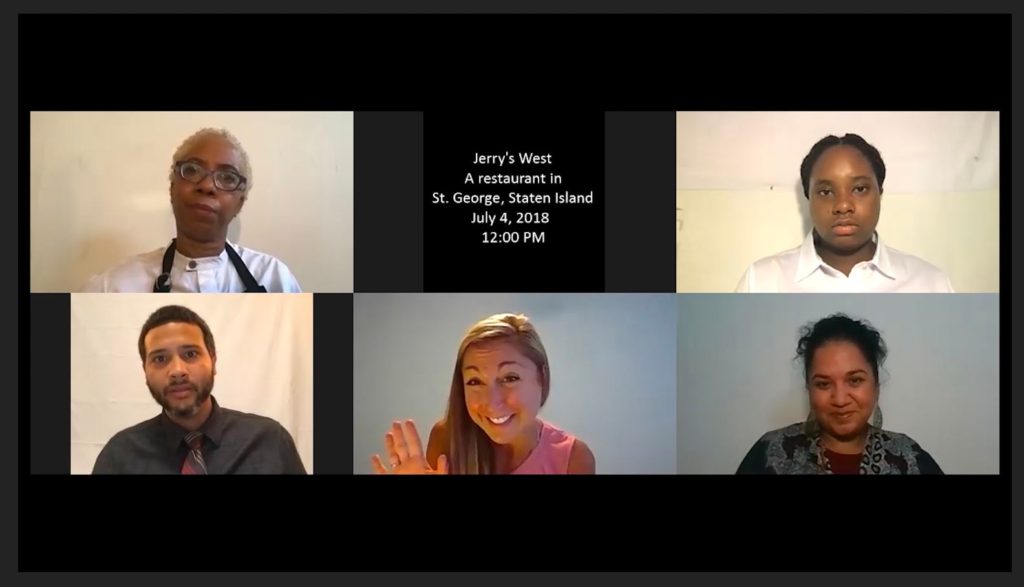 The cast, which also includes Michele Tokarczyk in a significant role, comes off as a cohesive unit, which, considering their inexperience and their separate Zoom windows, is no small accomplishment.

Co-directed by Jim Furlong and Devin Klos, both also in the cast, “A Five Mile Radius” is as accomplished a Zoom-window production as I’ve seen during these trying months with, for example, smooth hand-offs between characters and natural conversational flow. The play has some rough edges – this is its premiere, after all. But over ninety minutes, its social, racial and political points hit most of their marks. “A Five Mile Radius” has made a Hudson Guild Theatre Company fan of me.

A Five Mile Radius will be re-broadcast from Friday, October 30 at 7:30 to Sunday, November 1 at 5pm on Hudson Guild’s YouTube channel:  https://www.youtube.com/channel/UC0BZGvI9nx3OJWyYTDodAF