The Seeing Place Theater Works Up a Virtual “Sweat”

A play-writing recipe: Stir together equal parts racial tension, economic uncertainty, labor-management unrest, and class distinction. Fold in a smattering of unprovoked violence. Bake under hot lights for two hours and you will have cooked up “Sweat,” a dish so well prepared and served by Lynn Nottage that it earned her the 2017 Pulitzer Prize for Drama.

Set in a blue-collar bar in Reading, Pennsylvania, “Sweat” follows a group of friends whose lives are upended when their common-employer factory is re-organized. The Seeing Place Theater Company, unable, of course, to perform conventionally during pandemic-mandated restrictions, adapted the play into a surprisingly effective remote production, which was live-Zoomed last weekend. 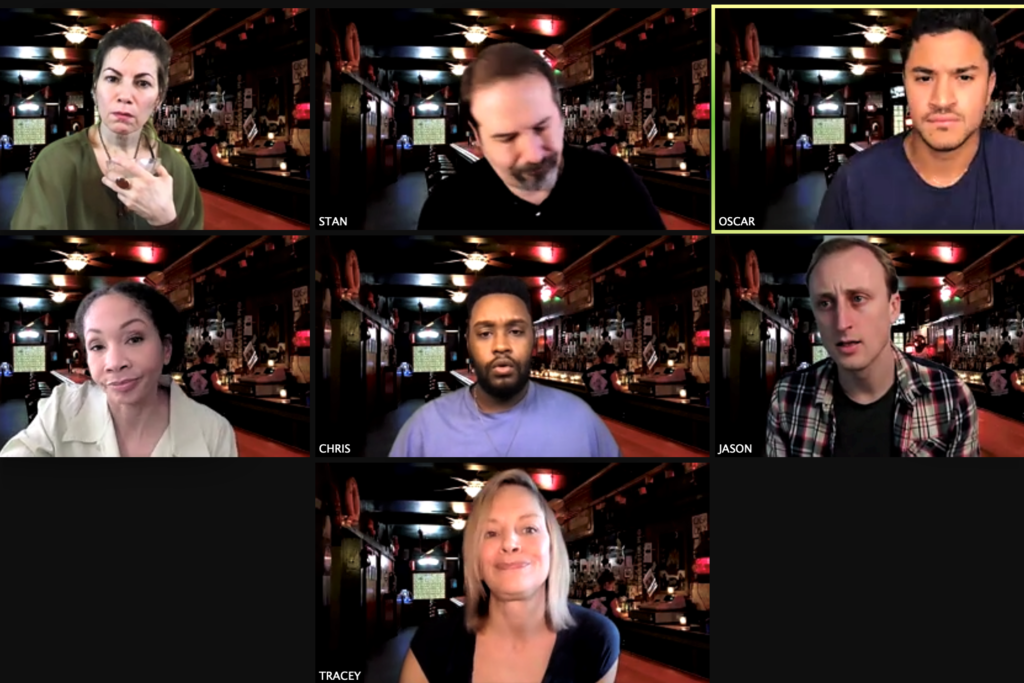 The “surprisingly effective” label is not directed toward the cast, whose neck-up acting was outstanding from the start. Under Brandon Walker’s sensitive, tech-savvy direction, and seen throughout in separated close-ups, all the actors found the sweet spot between stage and screen technique, neither over-emoting nor under-playing the earthy text.

No; my surprise was toward how well the play held up without the physicality that marked it off- and then on-Broadway in 2016-17. With the exception of one crucial violent outburst, which I wish Seeing Place had finessed visually rather than narrated in the form of stage directions to a blank screen, the activity and interactions were clear in the dialogue and in tightly edited Zoom-box transitions.

“Sweat” is framed as a flashback from 2008 to a 2000 incident perpetrated by 21-year-old factory workers Chris (Justin Phillips) and Jason (Logan Keeler). African-American and white respectively, their mothers Cynthia (Joy Sudduth) and Tracey (Lori Kee) also work “on the floor.” Long-time besties, the women’s friendship frays when both apply for the same work promotion.

That noted, and with high praise for them all, Cynthia and Tracey’s relationship is at the core of playwright Nottage’s object lesson. Long bonded by common circumstance, the women are inevitably no match for the capitalistic forces that conspire against their comradery.  Both were acted with depth that belied the Zoom isolation. Being screen-shot in unremitting closeup can be intimidating. Not to Sudduth or Kee.

Gimmick-free (no cross-box handoffs here), and back-dropped against what appeared to be a real tavern, this “Sweat,”while necessarily virtual, was nonetheless a totally immersive production. I look forward to seeing more of The Seeing Place. Hopefully soon – and in their physical Place.

[The Seeing Place is a self-described ensemble company built by actors and managed by actors as a supportive artistic home. Their mission includes providing working opportunities for BIPOC (Black, Indigenous and People of Color) performers and technicians. To that end, “Sweat” was a fine choice.]

During the pandemic “intermission,” off-Broadway Keen Company’s Hear/Now Season of Audio Theatre combines innovation with retro. Less than staged productions but more than a podcast, their reprisals of old time radio scripts are authentic blasts from the past.

Their audio stream of Lucille Fletcher’s legendary radio drama “Sorry, Wrong Number” was a nostalgic treat. Lauded by none other than Orson Welles as “the greatest single radio script ever written,” the 1943 original broadcast featured Agnes Moorhead as a bedridden woman who overhears a murder plot on crossed phone lines and – spoiler alert – gradually realizes she is the intended victim. (Barbara Stanwyck appeared in the 1948 movie version.)

Of course, Ms. Moorhead’s was a disembodied radio voice, as were those of the phone operator and the plotters. Marsha Mason was Keen Company’s fearful invalid, and while neither she nor the others were seen on a screen, they surely were in the mind’s eye.

Director Jonathan Silverman’s “Sorry, Wrong Number” was a faithful recreation of the radio experience, and though I could have moved about during the half hour – poured a beer, say – I sat, totally engrossed, ears tuned to my iPad. Just like the old days…well, radio.