A Star Turn by Laura Linney: “My Name Is Lucy Barton”

It seems that one-actor stage presentations have increased in number over the past decade or so. And as critical attention to them has grown with that proliferation, the quality level has risen as well. Long recognized as a theatrical form but marginalized before even multi-cast plays clocked in at ninety minutes, the solo show is now a staple not only of off-Broadway, but on the Main Stem too. Both Drama Desk and Outer Critics Circle include a “Solo Show” award category (Tony does not), lumping On- and Off-Broadway for consideration. (I am a DD/OCC voter.)  Serious solo-show pioneers include Spalding Gray and Anna Deavere Smith, while such as Billy Crystal, Whoopi Goldberg and Colin Quinn have adapted their comedic personas to the form. In 2004, Doug Wright’s solo play “I Am My Own Wife” won not only the Best Play and Actor (Jefferson May) Tony Awards, but the Pulitzer Prize for Drama as well.

Some solo shows are themed standup; some channel multiple characters to make a social point. None has been more complete a play than Rona Munro’s adaptation of Elizabeth Strout’s best-selling 2016 novel “My Name Is Lucy Barton,” not least because its one actor is the sublime Laura Linney. Having opened in London’s West End in 2018 to great acclaim, Ms. Linney and “Lucy Barton” are now ensconced at Manhattan Theatre Club’s Samuel J. Friedman Theatre. 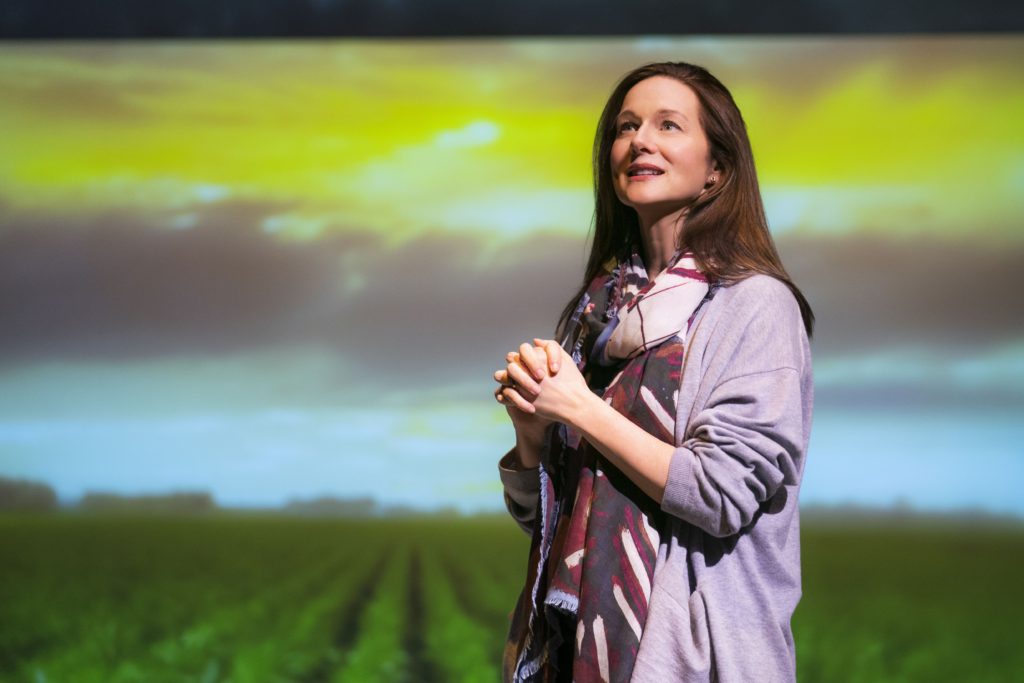 In the play, as in Strout’s novel, only two characters interact: Lucy and her mother. Others are briefly present or quoted, but the two women, whose connecting cord has been stretched but not quite broken, are the onstage characters. Linney’s shifts between the two are both sharply defined and seamlessly smooth. The tone of the play as, again, the book, is deceptively non-dramatic, mostly factual. One needs to read between the lines, so to speak, in order to become emotionally invested in Lucy, which makes Linney’s performance the more accomplished. Portraying the one woman, so different from the other, while holding that other at the ready, she shows more than she tells, embodying not only both women, but their unspoken conflicts as well.

“Lucy Barton” is a memory play, related by now middle-aged Lucy (age unspecified), about the time years before, when, nine-weeks hospitalized for an infection after a botched appendectomy, she awoke one morning to find her mother at her bedside. Far from a routine mom-visit, the two had been estranged for many years.

Lucy’s Midwestern childhood was marred by an unstable father, whose temper-fueled abuses of Lucy and her siblings (a bro and sis) were triggered by his World War II experiences – what we now know as PTSD. Her mother was an ineffectual onlooker, and Lucy lost herself in books, prompting her to become a writer. While she had fled Amgash, Illinois for New York years before, the emotional scars inflicted there never fully healed.

During the five days and nights her mother stays in Lucy’s hospital room, the two reminisce, sharing memories (Lucy) and gossip (mom) about childhood friends’ careers, failed marriages and such, never really touching on the sore spots that had caused their estrangement, leaving those elements to be related to the audience by Lucy. Little happens over the five days, and while Lucy expresses love for her mother, there is no reciprocation. The relationship remains puzzling (at least to me), but we stay involved thanks to Laura Linney’s layered, controlled, less-is-more performance. Her own mellifluous voice warms us to Lucy, while the midwestern nasal twang she affects as mama is perfection. The two women’s values are as different as their voices; Ms. Linney captures both beautifully. 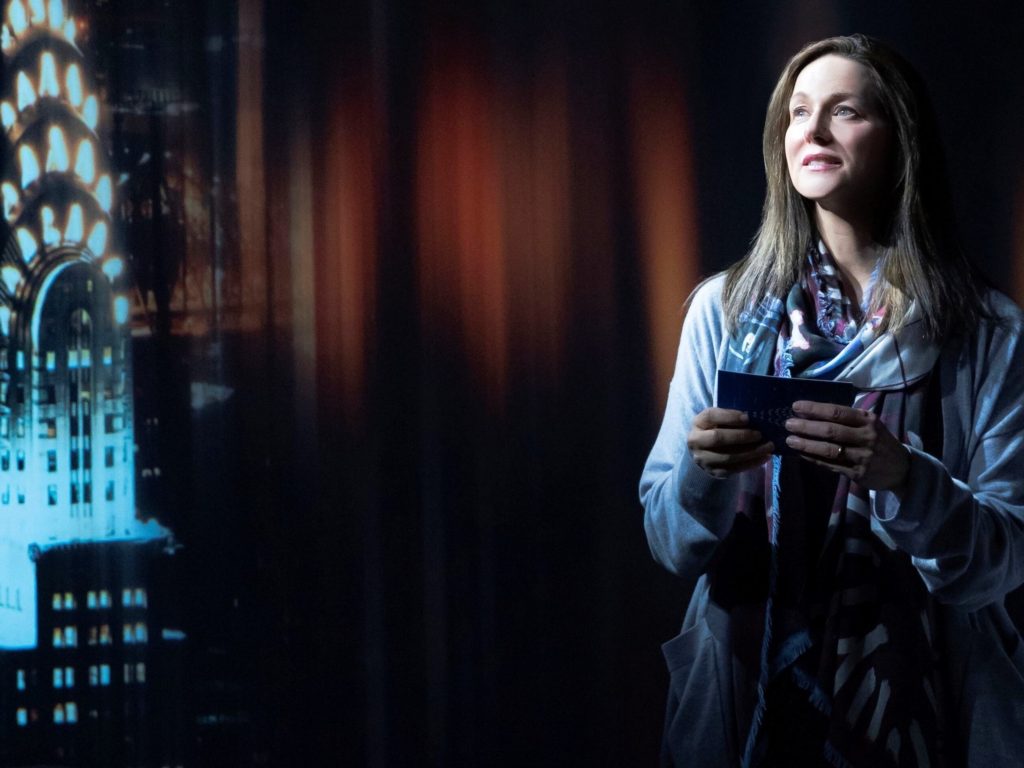 Director Richard Eyre has said that he “simply trusted in Linney’s ability,” which is as advantageous a starting point as any director could wish. He also complimented her prodigious feat of memorization. Of course, one cannot act a play without memorizing the lines, but being the sole speaker for 90 minutes? “Learning it,” Eyre pointed out, “was like a tightrope walk over the Grand Canyon.”  If so, Linney has pulled a Wallenda – and then some.

It is not a  negative to suggest that “My Name Is Lucy Barton,” on page or stage, might resonate best with women. Both book and play surely held my interest, albeit unemotionally. Ms. Linney’s performance, however, was mesmerizing.