Dad is getting on in years: “Harry Townsend’s Last Stand”

If it is true, as often stated, that there are only seven basic plots from which all plays are derived, one of the seven certainly involves conflicted parent-offspring relationships. Think “King Lear” and “Death of a Salesman” for prototypes. While George Eastman’s “Harry Townsend’s Last Stand” is not in those plays’ lofty firmament (Is any?), it is firmly planted in that plot category.

The only two characters, in fact, are 85-year old Harry Townsend (Len Cariou) and his mid-40s son Alan T (Craig Bierko), who are at odds over dad’s ability to live alone despite multiple infirmities. Five years after the death of his wife, Harry manages to manage alone in the lakeside Vermont chalet he built  as part of a community he founded years ago with nine partners, all now passed on. Key to his quasi self-sufficiency, however, are daily care visits from Alan’s over-extended twin sister Sarah (whose multiple marriages and divorces are fair game). 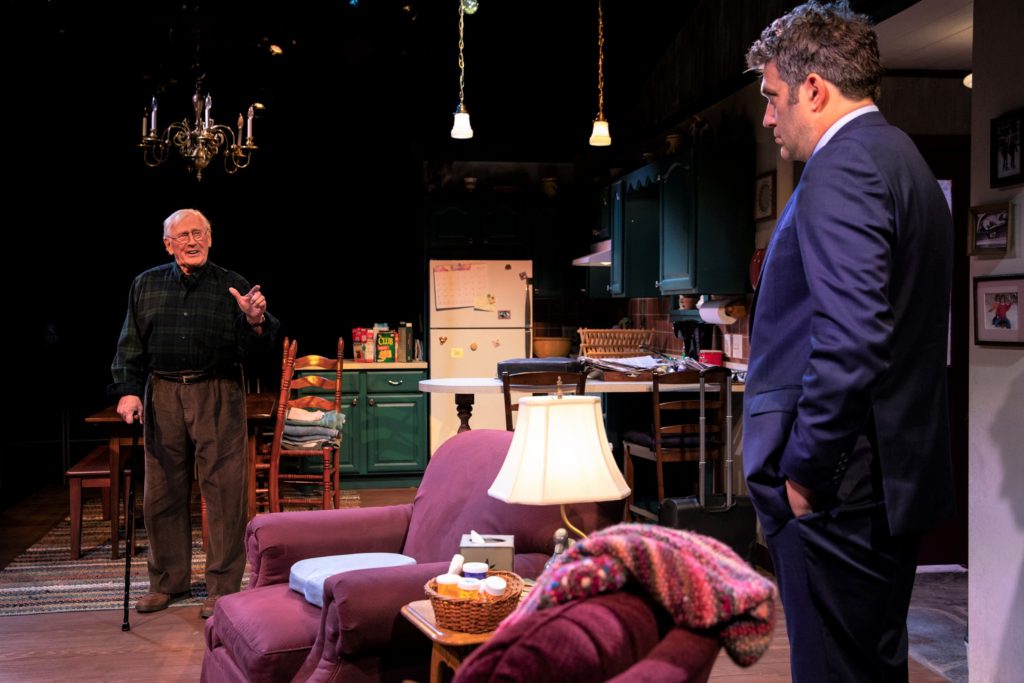 Harry’s infirmities are both physical, for which he ingests 14 different pills daily (twice a day if not closely monitored by Sarah), and cognitive, evidenced by lapses in memory or orientation, including who might be in the next room…or just be away…or deceased. (He also fell asleep while cleaning, leaving the vacuum running, never a good sign.)  Unsteady on his feet, Harry won’t consider a walker. Clomping through grocery stores, he says, old people look like they have scaffolding under them (which, when you think about it…)

After an 18-month absence, Alan “just thought I’d pop in for the weekend” from California (in a linen suit, no less), where he sells real estate. The overdue reunion evokes sentimental memories and a half-hour of banter, much of it amusing, but Harry suspects, not incorrectly, a hidden motive for the visit. (“You ‘popped in’? I don’t buy it, Alan. You’ve never been a popper.”)

There are hints from the start, but it takes a while for Eastman’s play to get to the point, which is that Alan and Sarah have made certain arrangements for their father, who deflects any such plans with a combination of derision and wit.

The play breaks no new ground in plot process or resolution, but some insights and diversions along the way make it a congenial journey. The difference, for instance, between tripping-and-falling and simply falling is a lesson in semantics, and while “Harry Townsend” stays mostly within PG-13 parameters, an anecdote concerning Harry’s moral leanings about the F-word has an unexpectedly warm payoff. 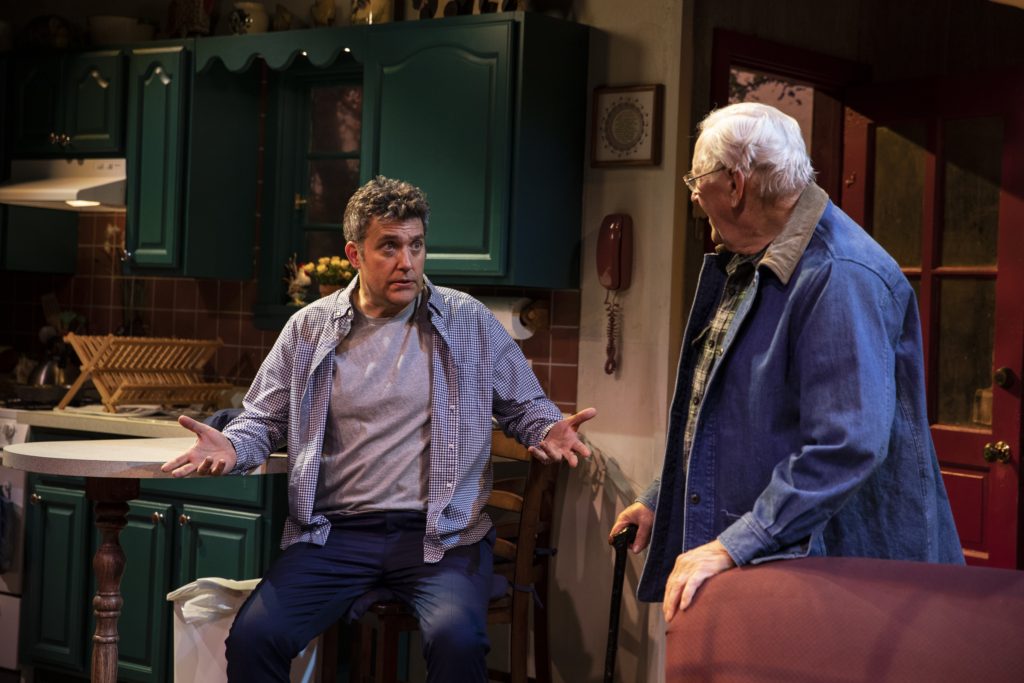 Then there are the two smooth performances. Harry is approaching Shakespeare’s seventh age of man, for sure, but he is hardly senile. Cariou turns the character’s crankiness and obstinance on their heads, making both those qualities somehow appealing. Harry’s age-related issues are reflected in some grappling for words, but Cariou does not let that hesitancy step on his laughs. Harry’s – make that Cariou’s – comic timing is on target throughout.

As is Bierko’s. Alan sets up most of Harry’s quips, but he is more than a straight man. Alan has issues with his father that Bierko plays with understated realism. Confrontation with a recalcitrant parent is never easy. Bierko finds the middle ground between Alan’s uncertainty and his determination.

Directed with sensitivity and a keen sense of bonding by Karen Carpenter on Lauren Helpern’s appropriately cluttered set (Shannon White’s props), “Harry Townsend’s Last Stand,” is a perfect fit for New York City Center’s intimate Stage II. While it might not be substantial enough to sustain a long run in the Big City, Eastman’s gentle comedy should have a viable afterlife. Two characters, one set, geriatric jokes, an excellent tag line (Sometimes it’s harder to like someone than it is to love them) and a two-hour running time: a Regional/Community Theater dream.

There is a symmetry here worth noting. In 1979, exactly half his life ago, Len Cariou, now 80, created the title role in “Sweeney Todd,” for which he was awarded one of the play’s eight Tony Awards as Best Actor in a Musical. Four decades on, here he is in another lead role on a New York stage. Having seen both productions, I can tell you there is more than just longevity at work. Here’s wishing you another forty, Mr. Cariou. 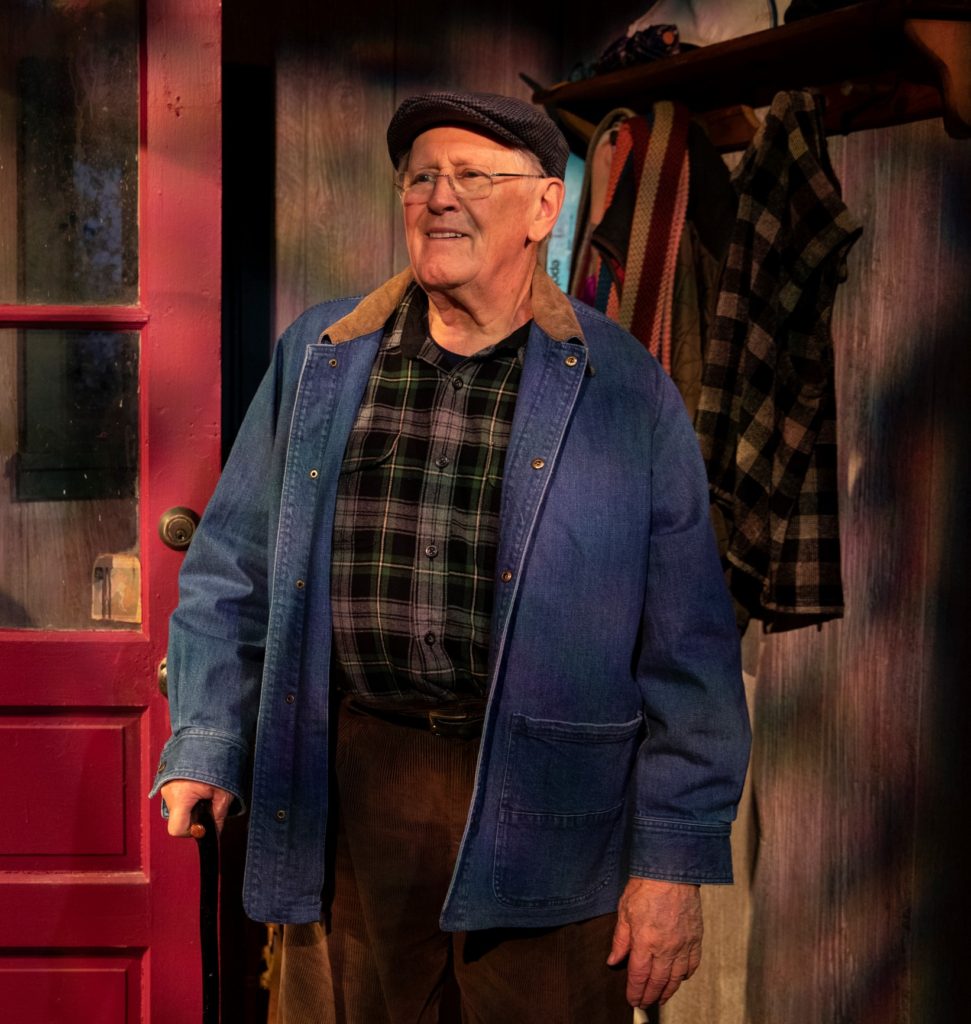