‘Swallow it down’ (“Jagged Little Pill”) ‘It feels so good’

A conundrum/problem/challenge: How to describe a Broadway musical that pretty much exceeds familiar superlatives in pretty much all its facets.

Well, let’s try, by first thanking Alanis Morrisette for resisting entreaties over the past two decades to turn her 1995 Grammy-winning album “Jagged Little Pill” into a standard juke box musical.  Released when the Canadian-American former teen pop star was just 20, the album, in that pre-streaming era, sold half a million copies in one week, and to date, according to a New York Times Magazine profile, it has sold as many copies as Taylor Swift’s entire discography combined. 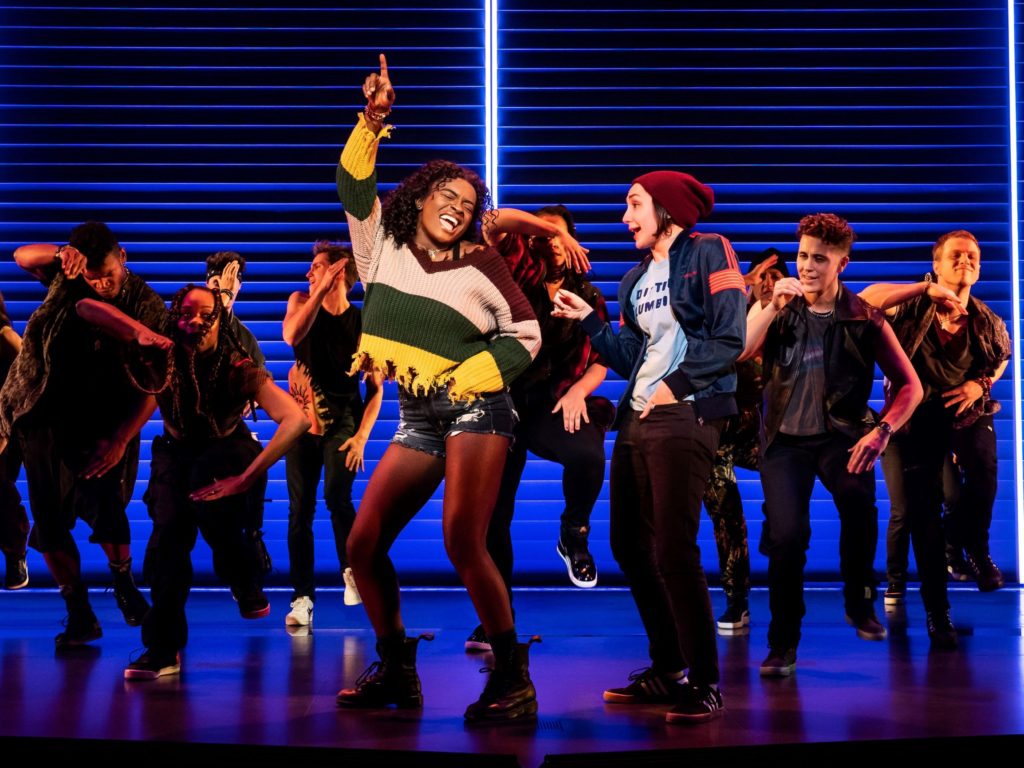 Some theater critics and journalists are labeling the show a juke box musical, but it is neither a biography (a la “The Cher Show” and “Tina”) or an excuse to spew out the tunes to a fan base (“Mamma Mia”). “Jagged Little Pill” is an in-depth story of a (fictional) family in various states and stages of dysfunction, with Morrissette’s songs woven throughout, revealing, clarifying and elaborating plot and character.

I confess to having had little prior exposure to the composer/lyricist, but the Times Magazine piece spurred me to a website that streams the album with the lyrics scrolling along the side. Those lyrics, attributed solely to Morrisette (Glen Ballard collaborated on much of the music), are variously angry, rebellious, mournful. Some are even funny, all are soulful. I was smitten upon first hearing, and the stage treatment solidified my affection. 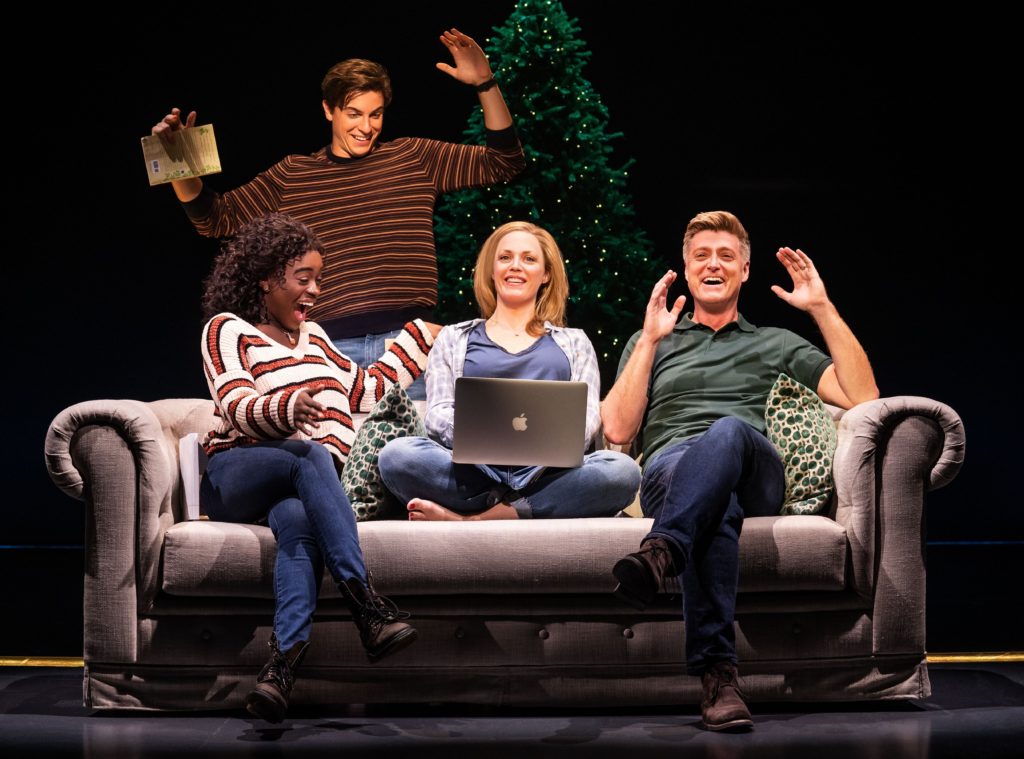 Mary Jane Healy (Elizabeth Stanley) is composing the Healy family’s annual Christmas letter (a practice she later disavows to a burst of applause), which features the news that her son Nick (Derek Klena) has been accepted at Harvard, a point of pride more for EmJay (mom’s handle) than for Nick. Still harboring a closeted dependency on pain killers well after an auto accident, EmJay is, as Morrisette’s “Mary Jane” lyric has it, ‘full speed baby/In the wrong direction.’ Her husband, Steve (Sean Alan Krill), of the 80-hour work-week Steves, is oblivious to EmJay’s near-manic state as well as to his son’s need to drop out for a while or to any aspect of daughter Frankie (Celia Rose Gooding)’s life.

Adopted after Nick was born to EmJay and Steve, now-teen Frankie, who is black, feels as if she is a token to the Liberal parents. She’s also gay (or bi as is later revealed), and in a relationship with high school classmate Jo (Lauren Patton): Cue “Hand in my Pocket” (‘…what it all comes down to is that I haven’t got it all figured it out just yet’).

Morrisette’s lyrics don’t just move the plot along. Rather, they are the heart of the multi-layered, dual-generational, inter-lacing story, fleshed out by book writer Diablo Cody (Oscar-winning “Juno” screenplay). There is Frankie’s quandary over her attraction to (male) Phoenix, (‘Well life has a funny way of sneaking up on you’ from “Ironic”) and a devastating incident at a party that is first enacted and later explored in a courageous monologue by Kathryn Gallagher. 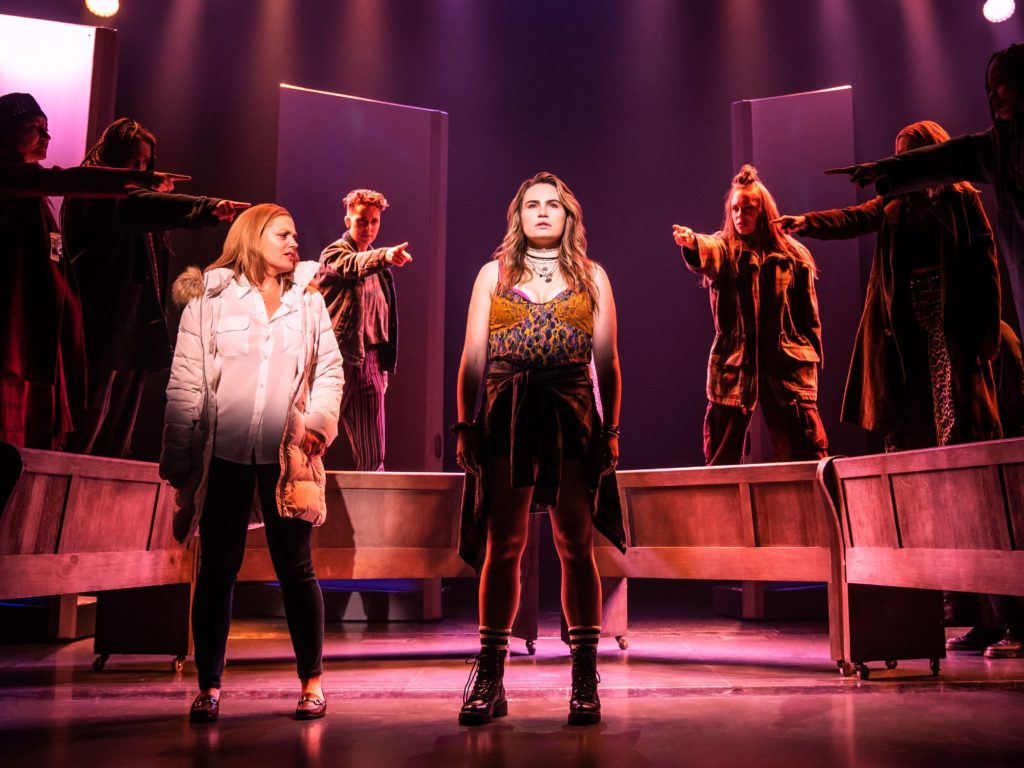 It’s borderline spoiler to reveal that the most referenced “Jagged Little Pill” cut, “You Oughta Know,” is here a same-sex lament, sung by Lauren Patton (and company) in what might be the most exciting vocal performance of the season (certainly so far).  ‘And I’m here to remind you of the mess you left when you went away…You, you, you oughta know’ 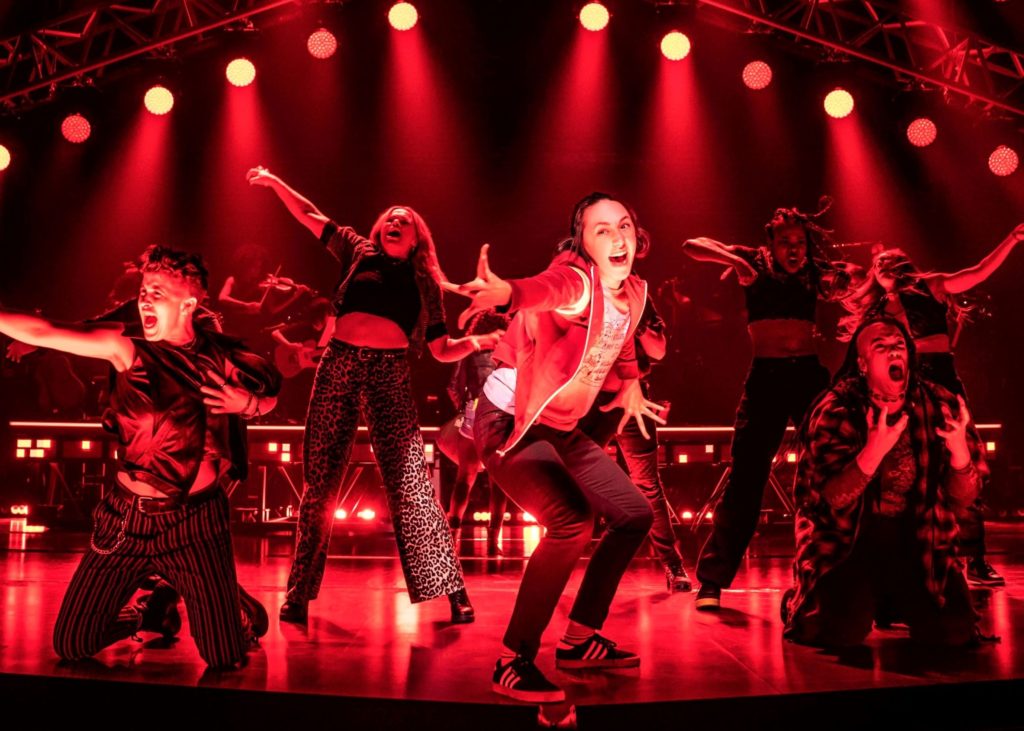 Acted throughout with a blend of naturalism and intensity, the characters are never less than believable – even when situations veer into imagery. Tom Kitt’s orchestrations and the musicians who glide in periodically from the wings, are stirring, while the scenic (Riccardo Hernández) and lighting (Justin Townsend) designs partner perfectly. Movement Director Sidi Larbi Cherkaoui’s choreography is…well, here’s where that conundrum kicks in (pun noted). Balletic, aerobic and generic rock movements fuse with hip-hop and its derivative, krump. (I’m not sure how the techniques merge, but it sure is exciting to watch.)

As brilliant as those elements are, they are all in service to Alanis Morrisette – and wrangled into a coherent theatrical marvel by director Diane Paulus. A near-perfect blend of plot, character, staging and performance, “Jagged Little Pill” wraps up by the final curtain with a positive vibe, leaving at least one theatergoer both emotionally drained and invigorated at the same time. That would be me.