Paper Mill Playhouse is giving a ball! “Rodgers and Hammerstein’s Cinderella” in NJ

“Rodgers and Hammerstein’s Cinderella” comes by that official title honestly. Having gone through several revisions since its debut as a TV special in 1957, the show depends for its success (or not) on how well (or not) that legendary team’s musical score is realized. How the vocal numbers are sung, how the orchestral arrangements are played, how the dance portions are choreographed.

I am pleased to report that the Paper Mill Playhouse production (of the 2013 Tony-nominated Broadway version) excels in those three categories and complements them with glittery special effects, creative lighting and gorgeous costumes. Running through December 29, the age-old fairy tale romance is a thoroughly agreeable holiday-month entertainment. Which is not to say it is perfect, just that the flaws, about which more below, are more in the material than the production.

Ella (Ashley Blanchett), dubbed Cinderella for her proximity to the ash bin, remains chipper even as she is mistreated by her wicked stepmother (Dee Hoty) and stepsisters Gabrielle (Rose Hemingway) and Charlotte (Angel Lin). Her never-say-die attitude keeps her from being perceived as a victim. We just know that this young woman will prevail. 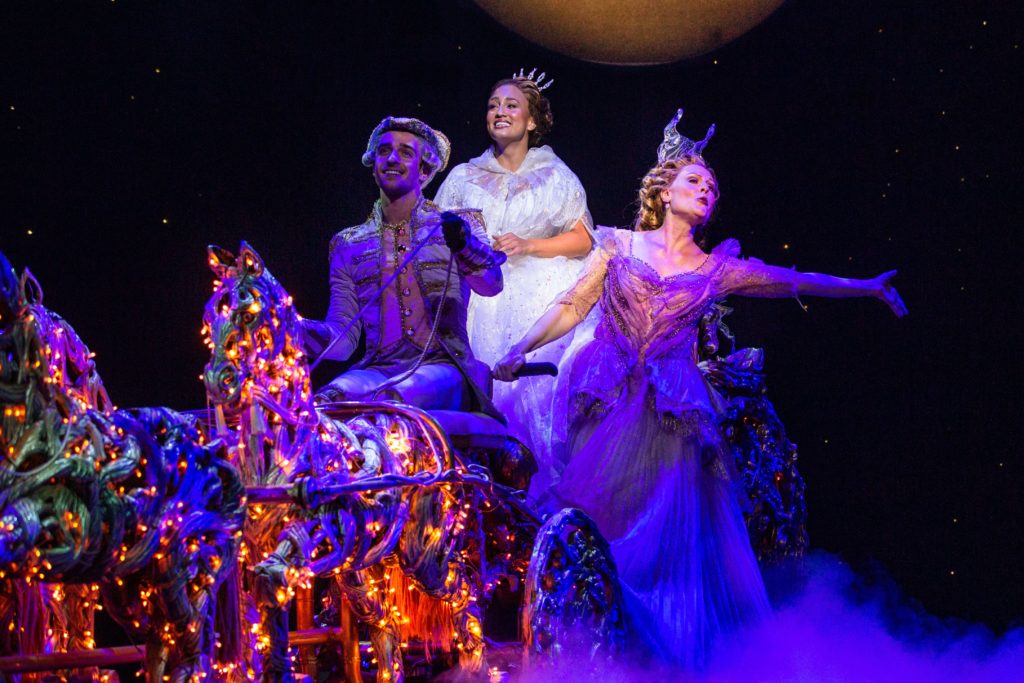 Off to the ball! Driver (John Peterson) and Fairy Godmother (Donna English) along for the ride. [Photo: Jerry Dalia]

The character’s absolute optimism also keeps the actress aglow, challenging us to look away. Even in housemaid plainery – and certainly in princess-worthy finery, Blanchett rivals the brightest stage lighting. And she sings like the proverbial bird. The wistful “In My Own Little Corner”; the “Impossible” duet with Fairy Godmother (Donna English); upbeat numbers with the step-trio and romantic duets with Prince Topher (Billy Harrigan Tighe) are not top-drawer Rodgers and Hammerstein, but Blanchett and company treat them as if they were. (Most were in the original and subsequent TV versions, as was “Do I Love You Because You’re Beautiful,” which became something of a pop hit – and is sung beautifully by Blanchett and Tighe.)

Among the Broadway updates is socio-political activist Jean-Michel, whose lobbying the Prince for peasants’ rights is taken up by Cinderella. The resulting subplot is weak, as is much of Douglas Carter Beane’s “New Book,” especially the attempts at comic one-liners, which land between corny and lame. Neither does it help that the activist is nails-on-chalkboard shrill throughout. Jean Michel’s romance with Gabrielle does, however, allow for that stepsister to become Cinderella’s ally, a revisionist relationship warmly portrayed by Blanchett and Hemingway. 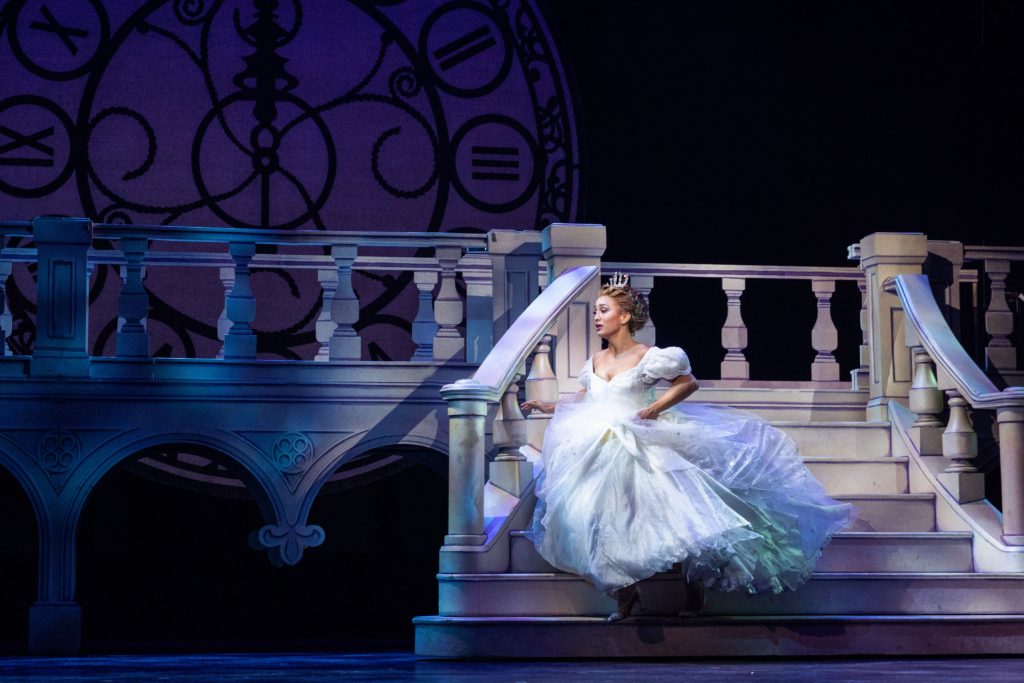 Ms. English scores with the Fairy Godmother’s aria, “There’s Music in You,” while Hoty and Lin tackle the bulk of the intended comic content with, to their credits, some measure of success. (Ms. Lin deserves overtime pay.) Michael Wayne Wordly is fine as the Town Crier who sings out the news of the Prince’s impending ball and banquet (and who will be back at 11 with weather and sports), and  Broadway veteran Christopher Sieber (“Shrek,” “The Prom,” others) is efficient in the functional role of Prince Topher’s malevolent advisor.

Under Mark S. Hoebee’s fluid direction, the show maintains a healthy pace, highlighted by Joann M. Hunter’s choreography, performed by an outstanding ensemble. The dance upon learning that “The Prince Is Giving a Ball” is infused with joy (well, wouldn’t you?) and the ball itself is a swirl of color and grace.

Technically, the show meets Paper Mill’s high standards – and then some. The fine-tuned team of Anna Louizos (sets), Charlie Morrison (lighting) and the celebrated William Ivey Long (costumes) combine to create a feast for the eye. A pumpkin might be out of place (“What’s that doing on set?”)  but the gleaming carriage it becomes is worthy of the aah’s and ooh’s it evokes, and, in a shout-out to Disney, woodland creatures turn into footmen (and back again). Mr. Long’s costumes are their own dazzling show, including the slick wardrobe transformations. (Keep your eye on Crazy Marie and, of course, Cinderella.) 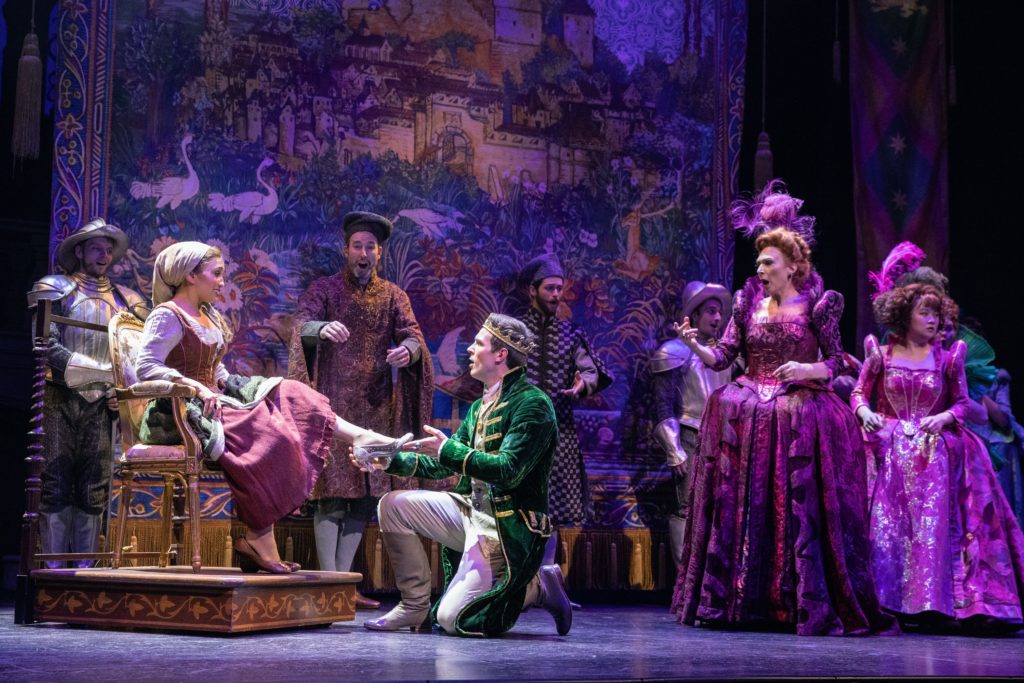 If the shoe fits…

One amusing adjustment hinges on how Cinderella deals with that pesky loose glass slipper. Oh, oh, you think in act one. How will the Prince ever find her? Not to worry. Cinderella solves the problem in act two. Apparently, she had read the story. “I’m good,” Cinderella declares. Yes, Ms. Blanchett, you are.