“Cyrano” gets a couple make-overs (including nose jobs)

Two recent adaptations of Edmond Rostand’s “Cyrano de Bergerac,” both titled simply “Cyrano,” play fast and loose with the 19th-Century French playwright’s masterpiece. At Two River Theater Company in New Jersey last month, the play, stripped of its revered open-verse construction and poetic imagery, was a bore. Jason O’Connell, who co-wrote the loose adaptation (with Brenda Withers), played Cyrano as a modern-day slacker with little regard for the language (or for projecting it). Among decent supporting performances – Luis Quintero’s clueless Christian was top-notch – O’Connell went his own partially-muffled way, apparently unchecked by director Meredith McDonough, and, but for a barely perceptible blotch, with a nose much like yours and mine.

The New Group’s version, running off-Broadway through December 13, while flawed, fares better.  New Group’s “Cyrano,” adapted and directed (and also prosed-up) by Erica Schmidt, whose schoolgirl-centric “Mac Beth” was astounding, arrived amid high expectations. Incorporating musical passages by the composer and lyricists for the Grammy Award-winning rock band The National, the title role is played by Peter Dinklage. Notwithstanding those impressive credentials, the whole emerges as less than the sum of its parts.

The casting of Dinklage as the man who considers himself unlovable because of a distinctive physical feature is at once inspired and potentially exploitative. As acted and directed here, the latter notion is not a factor. As written, Cyrano’s defining characteristic, his outsized schnoz, informs both his angst and his bravura. With limited mentions of his nose, it being here Dinklage’s non-prosthetic own, and the barest of allusions to his diminutive stature, this Cyrano’s tragic flaw is neither nose nor height, but the character’s emotional, not physical, sense of unworthiness. Dinklage’s is a self-assured portrayal of a brave and creative man constrained, paradoxically, by his own regard, or lack thereof, for his surface appearance. This Cyrano’s courage in the face of danger is unquestioned. But with the woman he adores in secret, not so much. “C’mon, man,” I wanted to shout, “you can do it. Tell her!”

We learn early that the pompous Count De Guiche (Ritchie Coster, subtly menacing) has the hots for Roxane, played by Jasmine Cephas Jones, gorgeous in a full-skirted red gown but constrained by Roxane’s shallowness. She in turn moons over Christian (Blake Jenner), a callow cadet in Cyrano’s regiment. Cyrano, of course, yearns for Roxane, who enlists him as Christian’s protector. 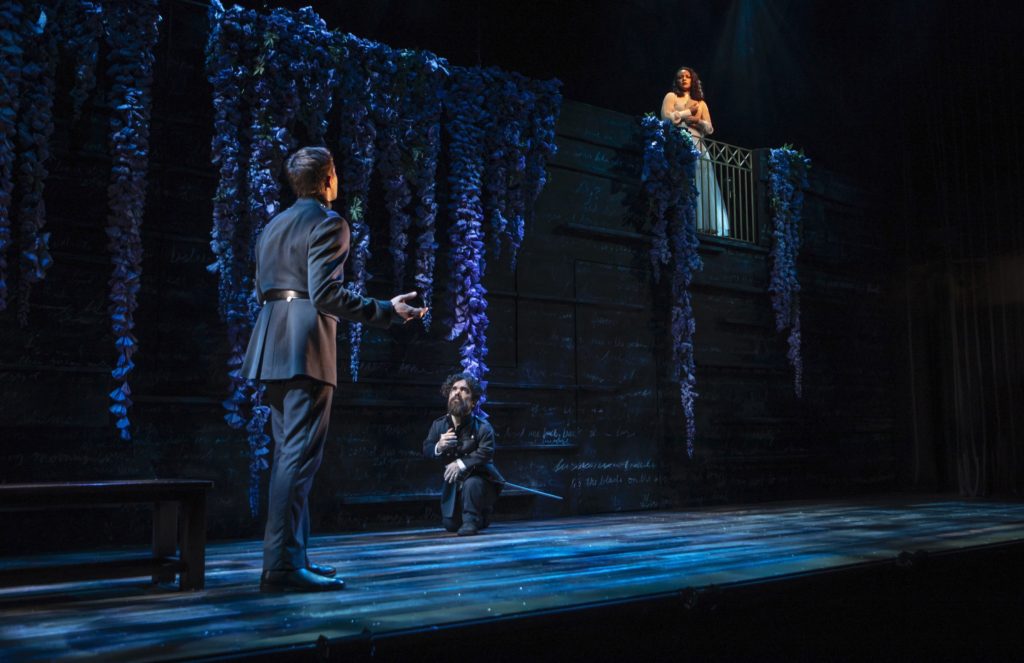 That protection morphs into Cyrano becoming the inarticulate fellow’s alter ego, ghost-writing his love letters and even wooing Roxane for him from the shadows in stage literature’s second-most-famous balcony scene.

All that is intact, but Ms. Schmidt’s ‘translation’ from Rostand’s exquisite (if some overblown) verse into modern vernacular leaves much to be desired. If it were wittier or more consistently down-market (as in Cyrano’s dismissal of lousy actor Montfleury with “Who will defend this shit?”), sure. But the prosaic middle-ground is uninspired. 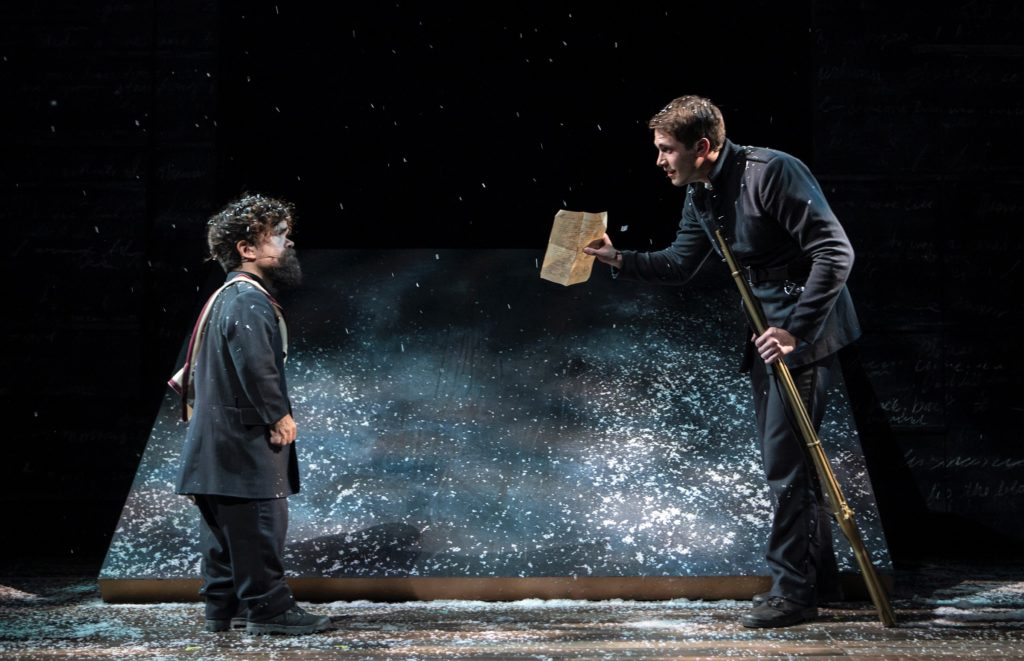 Christian confronts Cyrano on the battlefield. He knows.

As are the musical interludes. Mostly non-melodic and without rhyme, the numbers tend to slow the action without adding insight. (An exception is a haunting piece with each doomed cadet sending a last letter to a loved one.) And, based on this sampling, Dinklage proves less of a singer than an actor. His deep-bass tone works well when bombastic is called for, but there’s little emotion or variety when set to the lackluster music’s dull lyrics. It also strains the concept that Roxane does not differentiate Cyrano’s voice from Christian’s until, abruptly (in Rostand’s wrap), at the very end.

Among the missing are Cyrano’s impromptu duel-poem (“Now as I end the refrain…”); Roxane’s battlefield Care-package delivery; and Cyrano’s delirium-fueled fencing with Falsehood, Prejudice and Treachery. What is present is a Cyrano whose ‘difference’ is as plain as the nose on your face. To Peter Dinklage’s credit, the obvious disappears into the internal. “C’mon, Cyrano; speak up!” If only. 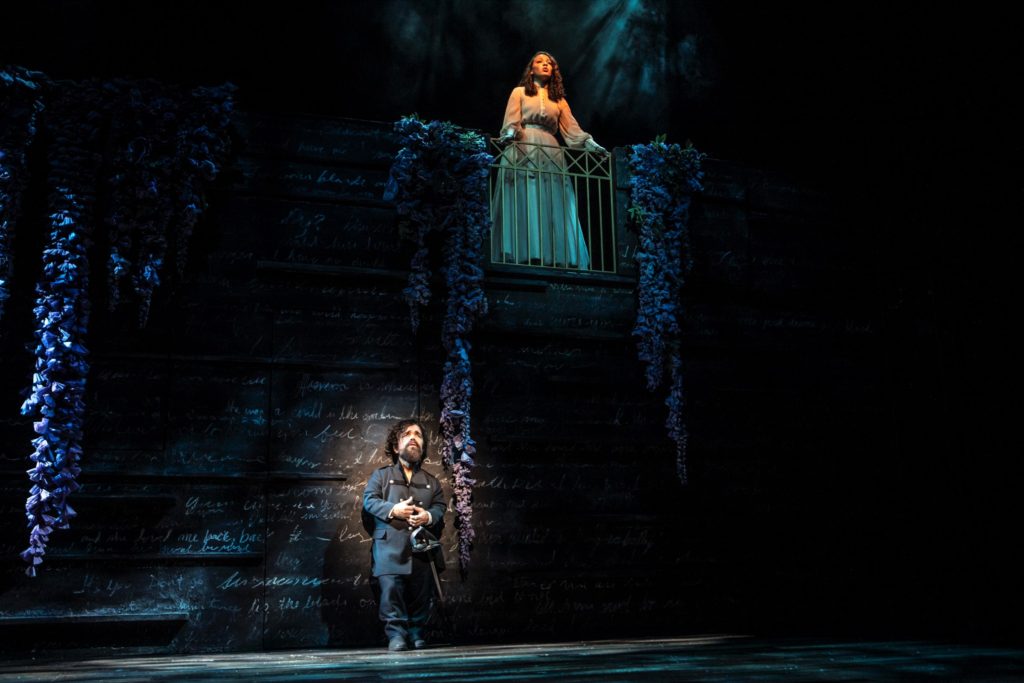 As if to mitigate the play’s French origin, Roxane is spelled double-n Roxanne; the buffoon actor Montfleury is re-dubbed Montgomery; and Christian is pronounced KRIS-chun, which is jarring on a couple levels. Even the Two River production kept faith with the original setting. In 2009 the Stratford Festival in Ontario staged a version, starring Colm Feore and directed by his wife Donna Feore, that combined Anthony Burgess’s English translation with portions of the original text in French. I understand precious little French, but believe me: it was rhapsodic.