A sure bet: “Guys and Dolls” in Deal, New Jersey

The overture to “Guys and Dolls” is unique in that it is scripted as well as orchestrated. It is a street scene collage danced – acted-out really – by the ensemble: floozies, society dames, bobby-soxers, a cop-and-pickpocket duo, a drunk and assorted tourists and hangers-on. If you couldn’t visualize Damon Runyon’s 1940s Times Square going in, ten minutes later you can.

The expansion and musicalization of Runyon’s short story “The Idyll of Miss Sarah Brown” resulted in “Guys and Dolls,” as close to musical-theater perfection as any show before or since. If you have never seen it, or not in a long while, you may want to log off here now and secure a ticket to one of the remaining performances at the Axelrod PAC in Deal, New Jersey. Go ahead; I’ll wait.

Outside the Save a Soul Mission [Photos: Rich Kowalski]

Now then, while there is a local flavor to the production, Axelrod’s twenty-member cast is headed by several bona fide pros (under Equity Guest Artist contracts), with some impressive credits. The others range from semi-pro to recent college graduates, with varying levels of experience. Under Lisa Stevens’s cohesive direction and choreography, however, every one of them is at the top of their considerable talents. That may be partly due to the iconic show itself, which brings out the best in performers, but this group, including musical director Ethan Andersen’s terrific eight-piece on-stage orchestra, is as fine-tuned a unit as I’ve seen in a New Jersey venue. 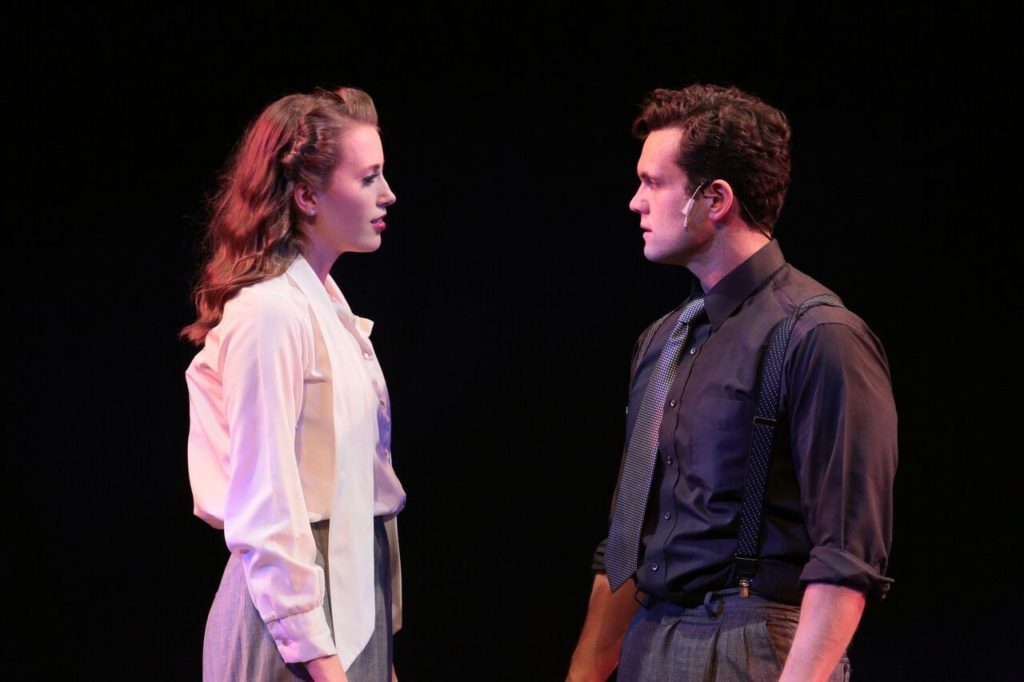 The Hot Box Dolls: “A Bushel and a Peck”

The story, at once comedic and romantic, was framed by radio and TV comedy writer Abe Burrows in Runyon-esque vernacular, involving  limited contractions (I am for I’m) and use of the “historical present,” where something is stated in the present tense but you know it refers to the past. (I am sitting there when I realize how much I am enjoying the show.) Burrows’s first stage effort, the book complements Frank Loesser’s music and lyrics to a tee. And vice versa; the songs are extensions of the characters. Sarah Brown’s “I’ll Know,” for example, could as well be spoken, although that would deprive us of the pleasure of hearing Evan Bertram sing it. Her tones are crystalline, with a slight vibrato that evokes a stringed instrument. Changing tempo and mood, Bertram’s “If I Were a Bell,” about Sarah being in a happy place, put me in one as well.

Ideally, Sky Masterson should be tall, handsome and self-assured. Enter Stephen Mark Lukas, who is those qualities as well as a singer as comfortable with Sky’s half of “I’ll Know” as with “Luck Be a Lady” and his seamless segue from “My Time of Day” into “I’ve Never Been in Love Before,” a soaring duet with Bertram.

Also out of Central Casting are Jared Gertner and Jenny Hill as Nathan Detroit and Miss Adelaide, carrying the bulk of the show’s comic load and belting out their numbers like the Broadway vets they are. (“Book of Mormon” is Jared’s most recent; “Spamalot” is Jenny’s.)  Hill’s “Adelaide’s Lament” (‘a person could develop a cold’) is a winner, and she’s the ideal doll to front the alluring Hot Box Girls on “A Bushel and a Peck” and “Take Back Your Mink.” She and Gertner ace “Sue Me,” and the Adelaide/Sarah duet “Marry the Man Today” is a highlight. 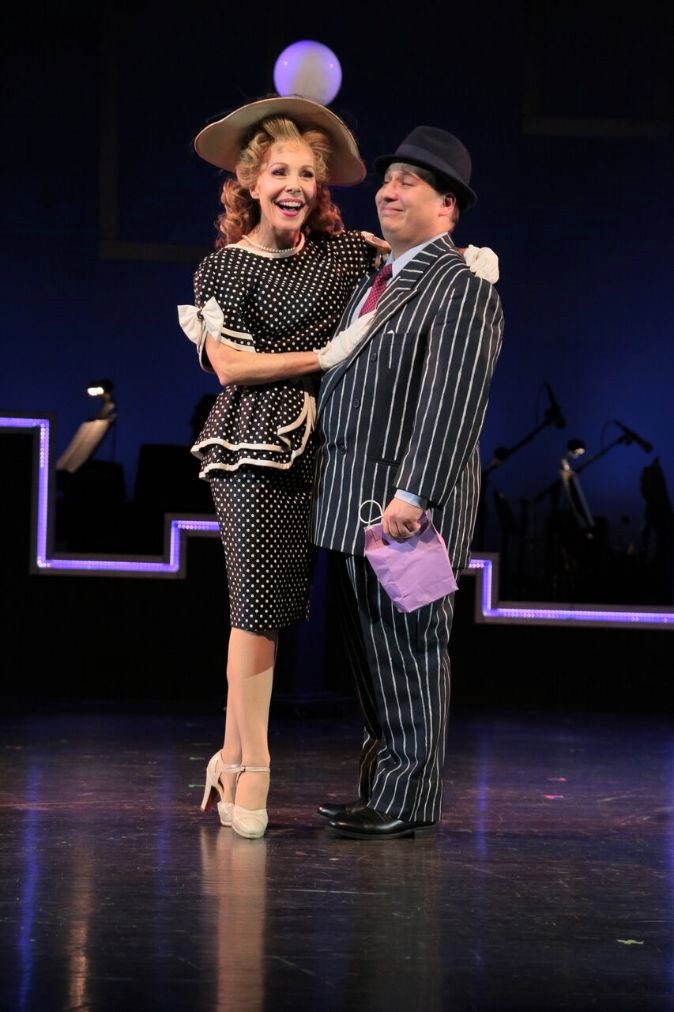 Among the capable supporting cast, retired public school teacher Mark Megill sings Arvide Abernathy’s “More I Cannot Wish You” as warmly as I’ve ever heard it and Brendan Doyle does a bang-up job with Nicely-Nicely Johnson’s “Sit Down You’re Rockin’ the Boat.” And you do not want to tangle with Ryan Widd’s menacing Big Jule from Chicago (although Sky clocks him good). 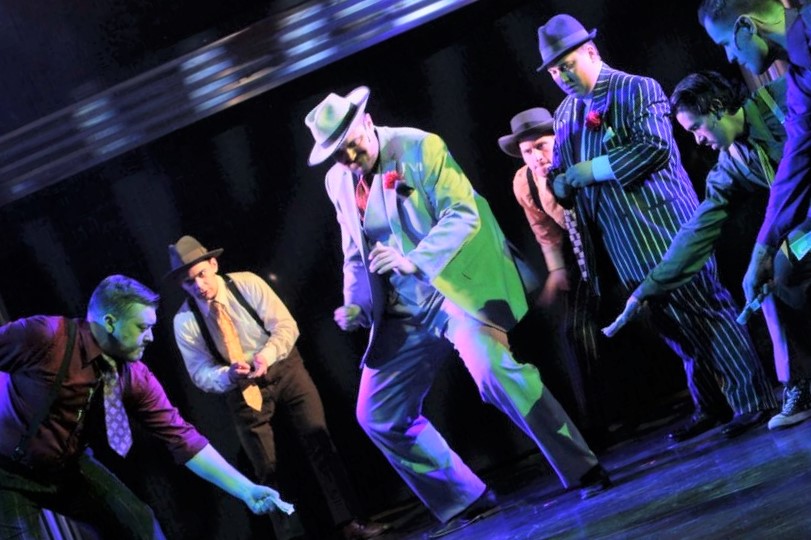 The crap game guys: “Luck Be a Lady” ballet

There’s all that – and more – to enjoy in this consistently entertaining production: classy ensemble numbers, guys cracking wise, dolls doing a PG-13 strip tease, and an update on the Biblical source of  “There is no peace unto the wicked.” Obediah knows his Bible. Mine includes chapter and verse on American Musical Theatre. This “Guys and Dolls” might convert you as well.

My “Guys and Dolls”memories include seeing the original production (after which my sister’s boyfriend taught me to shoot craps – at age ten); a revival in the 1960s with Jerry Orbach and Alan King as Sky and Nathan (and Jake LaMotta as Big Jule); an all-black cast in 1976 with Robert Guillaume as Nathan; a few Regional productions; and, memorably, the superb 1992 Broadway revival in which Nathan Lane re-defined Nathan Detroit – and why not? Lane had taken the name Nathan years before as homage to the character. In 1955, director Joseph L. Mankiewicz hired a real-life Sky Masterson for the movie and, inexplicably, cast him, Frank Sinatra, as Nathan Detroit. Go figure.