Revenge is a dish best served cold? Not so in “Lily”

Two things to know about “Lily,” the world-premiere play at New Jersey Repertory Company in Long Branch. First, Christopher Daftsios’s play is constructed like an orderly three-part farce, with a situational setup, followed by a discussion about how to set things right, and finally an attempt at resolution during which nothing goes as planned. The second thing to know is that “Lily” is not a farce. Far from it. It is a serious play about unsavory characters reacting to a repellent occurrence.

Which sounds worse than it is – for a play, I mean. While no one depicted is a nice person (despite the playwright’s efforts), and the act that propels the play is indefensible, “Lily” manages to command attention for a couple hours. Intermission walkouts are unlikely.

The big reveal comes early in the play, and it is not my intention to tease, but custom dictates non-disclosure here. Suffice it to say that one character’s routine behavior is derailed.

Country-western star Toby, acted by playwright Daftsios, is accustomed to welcoming a fan to his dressing room after performances. His ‘guest’ is always a compliant young female, culled from the herd by his body man Tommy, played by erstwhile NJ Rep assistant stage manager Adam von Pier.

This time it is Haley (Joy Donze), who tipped Tommy a C-note to ensure being picked on this, her 18th birthday (there’s that, at least). After some will-she/won’t-she palaver, the purpose of her visit is revealed through deed and discussion.

In summary, Toby’s past has caught up with him. It is a past rife with debauchery, facilitated by those around him, including his manager Sam (Tait Ruppert), whose cover-ups have smoothed Toby’s path. Until now.

The acting is uneven. Daftsios is a speed-talker, difficult enough to decipher even in an intimate auditorium and not helped by Toby’s country-western drawl. von Pier’s Tommy is laid-back to a fault, quiet and acquiescent even when a hint of menace is indicated. And while the playwright would soften his image by having him sing opera and spare the more innocent women from willful assault, give me a break; he’s still Toby’s butt-boy. Sam is an unrepentant louse, and Ruppert plays him just so.

Haley is far from the play’s good guy; there isn’t one, despite Daftsios’s implied justification for her actions. But Donze finds some variety in her character – colors, in the vernacular. She handles Haley’s explanatory monologue near the end very well, creating empathy for the girl. 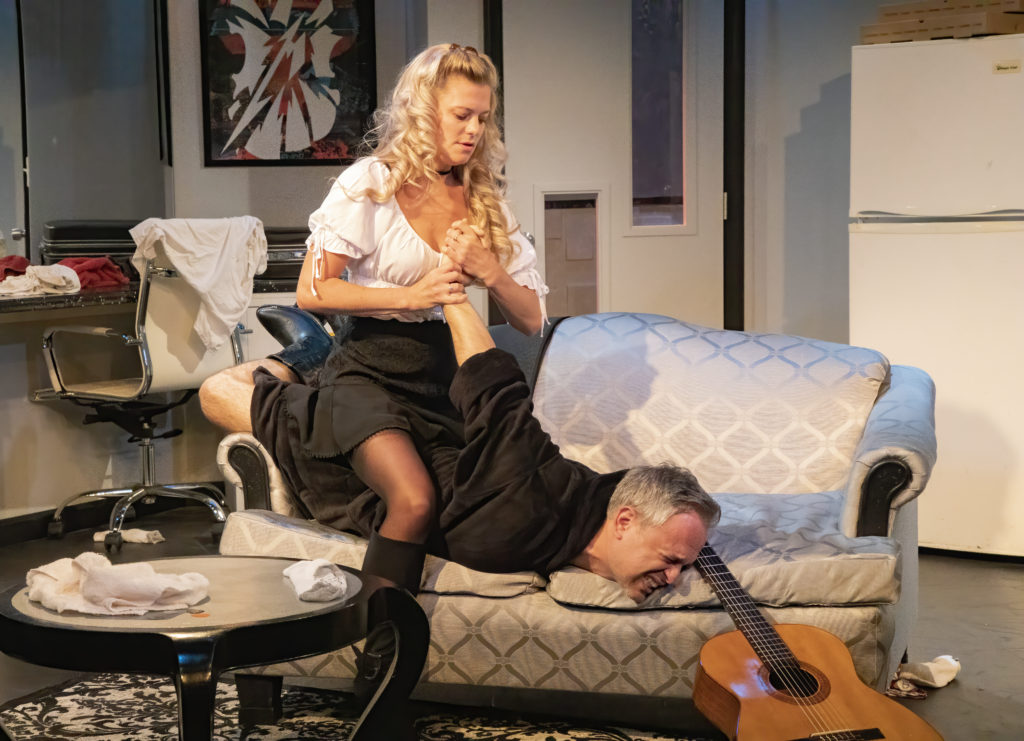 Director Sarah Norris’s physical staging is well adapted to NJ Rep’s relatively small stage (on another of designer Jessica Parks’s fine sets), but she might have taken some pains to blend the performances into a complementary style.

What happened with Toby years before and the repercussions now are just plausible enough to form the groundwork for Daftsios’s dramatic fiction. How the situation is handled as it progresses, however, is a stretch. Sam’s overly simple solution is rejected amidst revelations of Haley’s lurid past (some made-up for effect), and that of her alcohol-addled mother (the titled Lily) and grandmother, as the play proceeds to an ending that leaves things hanging. Haley gets what she wants, I guess, but the question remains: is it worth what she does to get it?