It is generally conceded that “Period of Adjustment” is Tennessee Williams’s only full-out comedy, but “The Rose Tattoo” could claim a close second, especially as the second half plays out in the highly entertaining Roundabout Theatre Company revival.  The laughs are of a different sort; we come dangerously close to laughing at the characters, but as played by Marisa Tomei and her ideal castmates, these folks are endearing – extreme in behavior, yes, but hardly objects of ridicule.

Set in a Sicilian-American enclave “somewhere along the Gulf Coast between New Orleans and Mobile,” Serafina Delle Rose (Tomei) awaits her husband’s return from his banana-truck route. Their finances are linked to the cargo stashed under the bananas; their personal bliss, at least hers, to their lusty amorous activity, which ends when Rosario is killed in a roadway crash (caused, in the original, by the police shooting at the truck). 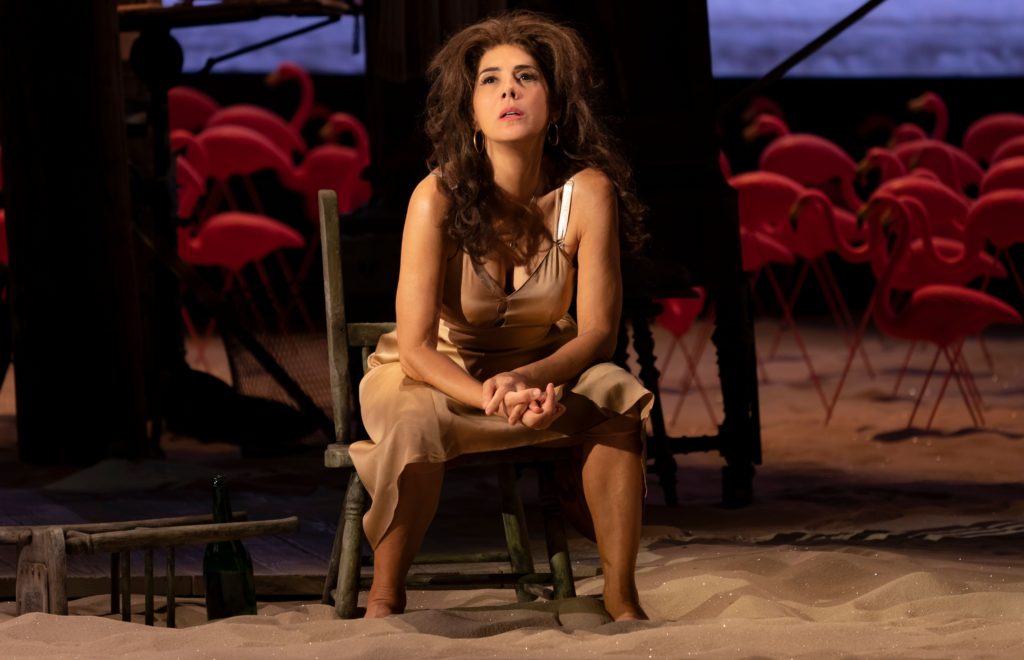 Three Years Later: Serafina, supporting herself by sewing for the neighborhood women, who openly scorn her, is in a state of perpetual mourning and denial of Rosario’s infidelities. Her daughter (Ella Rubin), now 15 and rebellious, is repulsed by her slovenliness (At Rosa’s “Mama, you look disgusting,” tears sprang to my eyes.) Life for Serafina is bleak. Enter Alvaro Mangiacavallo (Emun Elliott), a trucker himself who becomes stranded nearby. Serafina sees in the simple fellow, the grandson of an actual village idiot, “my husband’s body with the head of a clown,” and although she is sick of men “almost as sick as I am of women,” chemistry will out, and their relationship develops.

Tomei flirts with excess from the start, but as close as she gets, she manages to not go over the top. She and Elliott, a Scot whose Alvaro is spot-on Sicilian (as is, less surprisingly, Tomei’s Serafina), hit their comic and romantic marks unerringly under Trip Cullman’s astute choreographic direction.

Serafina’s scene with Rosa’s innocent sailor boyfriend Jack (Burke Swanson) is perfectly calibrated by both actors. It is funny, somewhat silly even, but warmly human nonetheless.

Tennessee Williams may not have intended an out-and-out comedy, but it is widely documented that he was at an upbeat point in his life, personally and romantically, at the time of its writing (1950). That state of being is reflected in the play. “My love play to the world,” he in fact called it. Shakespearean tragedies end with dead bodies strewn about; the comedies resolve with couples celebrating their pairing-up. There’s nary a dead body at the end of “The Rose Tattoo.” Even Rosario’s ashes have been blown away in the wind.