“An American in Paris” Touches Down in Westchester County

How long after seeing some musicals does it take to get a song out of your head? I’m stuck with “NYC” a full week after every “Annie,” and “Goodbye to blueberry pie” after “Gypsy.”

Isolating any one number from the abundance of riches embedded in “An American in Paris” is a fool’s errand because, you see, all sixteen of its songs were written by George and Ira Gershwin.

Originally a symphony (by George) sans lyrics that the New York Philharmonic premiered at Carnegie Hall in 1928, “An American in Paris” was filmed in 1951 (Gene Kelly/Leslie Caron), featuring lyrics set to the symphony by brother Ira. George had died 15 years before, but a more vibrant, living collaboration does not exist. (George Gershwin died at age 39. Just imagine if…well, never mind.)

The multi award-winning stage adaptation, with a revised libretto by Craig Lucas, ran for 18months on Broadway in 2015-16, and an ambitious and thoroughly delightful revival is running now through November 24 at Westchester Broadway Theatre  in Elmsford NY. 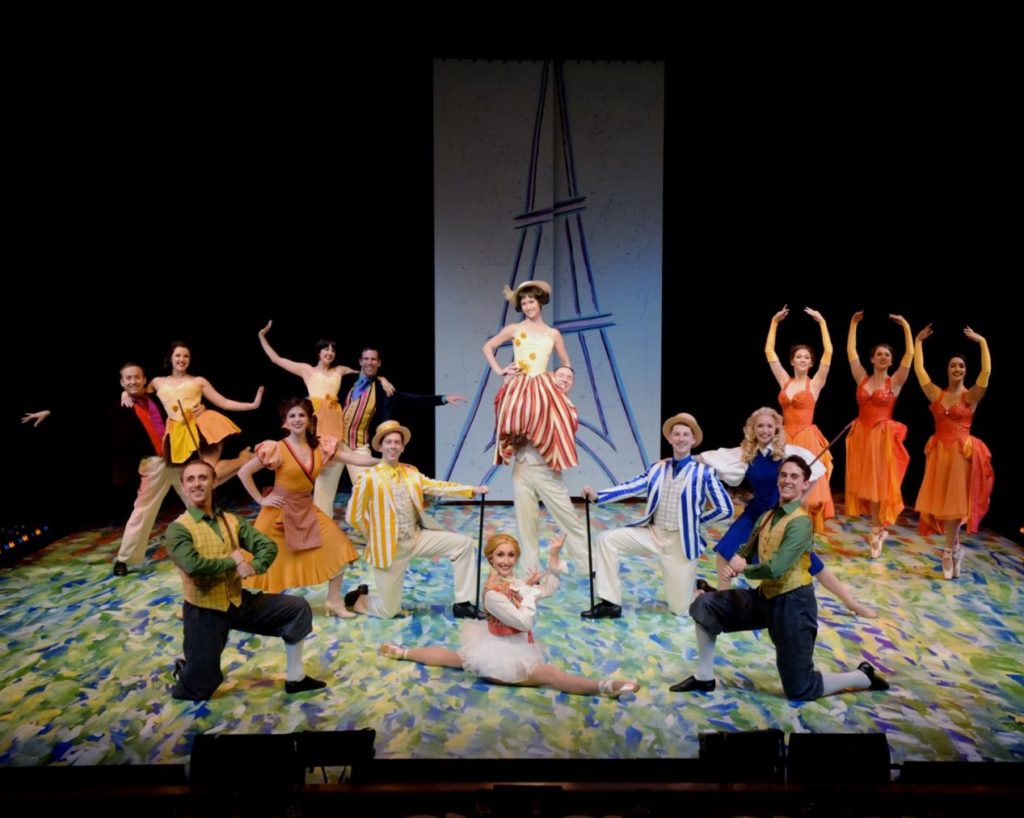 With a cast of 25 actor/singer/dancers and an eleven-piece orchestra (large for Regional venues), the emphasis at WBT is on the Gershwin brothers’ score. With such as “I Got Rhythm,” “S’Wonderful” and “Shall We Dance,” as well as less familiar numbers (“Beginner’s Luck,” for one), who could ask for anything more?

There is more, of course: a romantic plot line that is predictable and a bit creaky, but which also includes sobering references to the Nazi occupation of Paris during the recently concluded war. American artist Jerry Mulligan (not that one, and played here by Brandon Haagenson), seeking inspiration in Paris, meets two women: lithe and lovely dancer Lise (Deanna Doyle, ideally cast) and wealthy ‘benefactress’ Milo (Lauren Sprague, imbuing the ice queen with a hint of warmth). 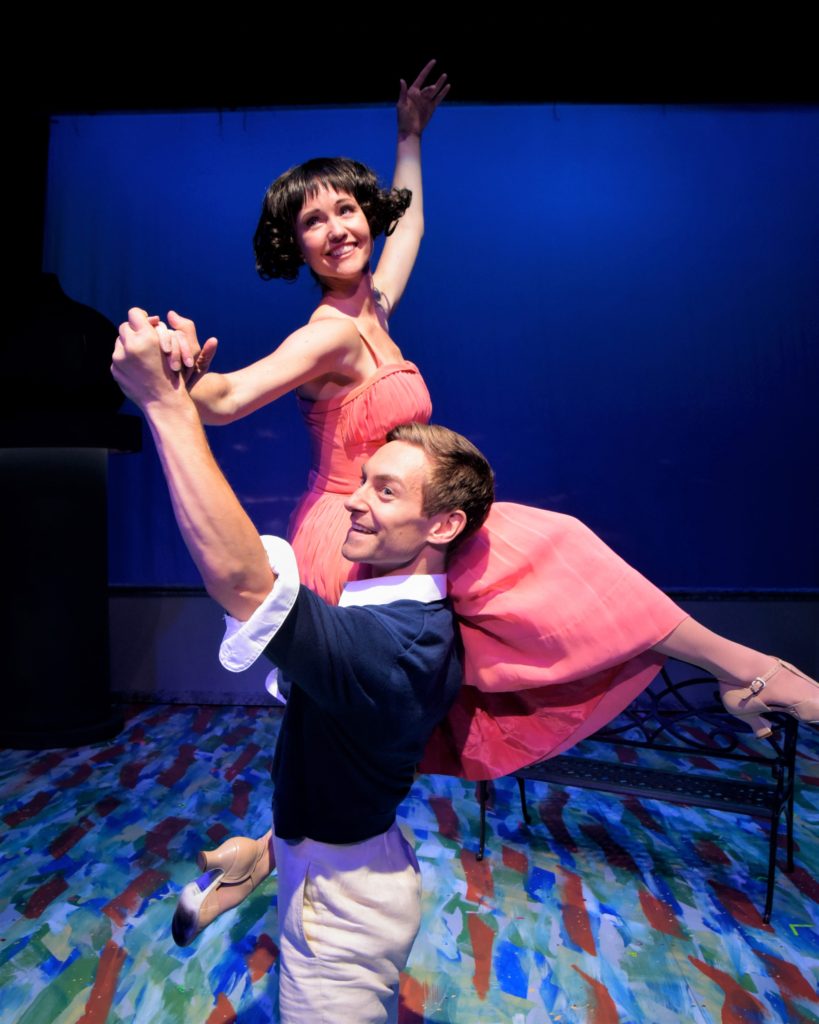 Lise is betrothed to Henri (Jonathan Young), her wartime protector, and together with pianist/composer/narrator Adam (Tommaso Antico), the three men connect as friends, commiserate about romantic woes and collaborate on song-and-dance turns. By the time they trio on “S’Wonderful” and later “They Can’t That Away from Me,” they are your pals as well. 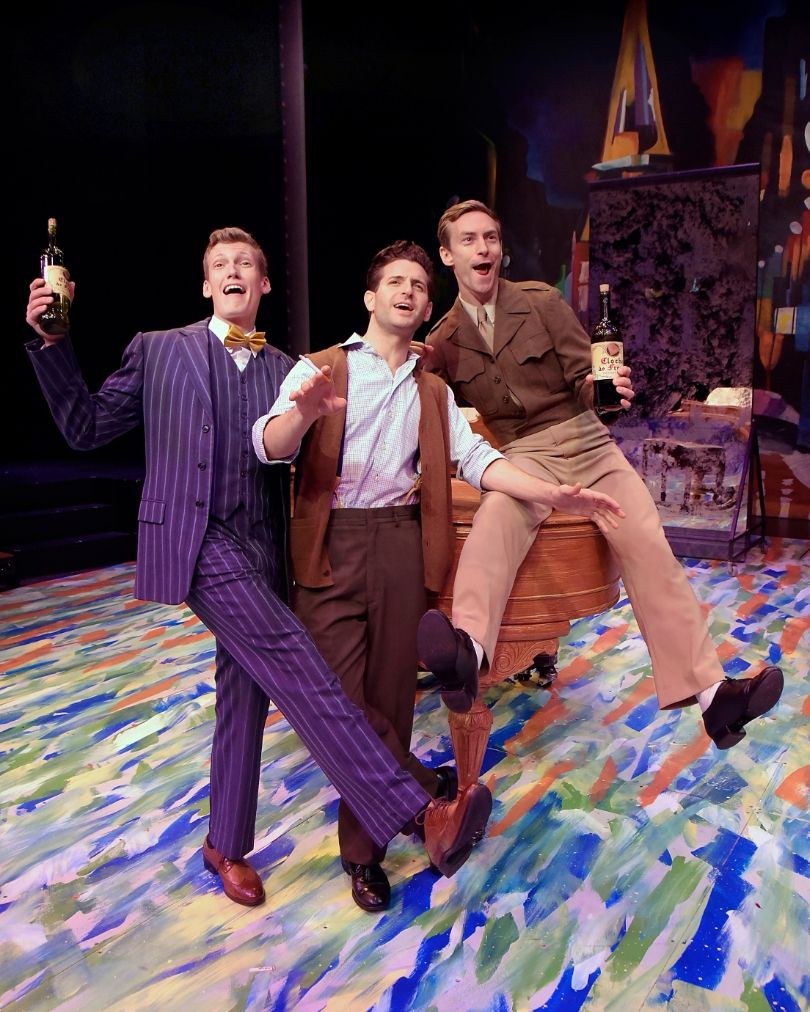 Ms. Doyle, reprising her Lise from the National Tour, is a joy – a saucer-eyed gamin projecting womanly stirrings in song (“The Man I Love”) and youthful innocence through dance. The “American in Paris” ballet, fully twelve minutes in length, is a showcase for Doyle, Haagenson, the talented ensemble, music director Ryan Edward Wise’s excellent musicians and for director and choreographer Richard Stafford.

Have I mentioned “But Not for Me,” “Who Cares” and the self-fulfilling ditty “Fidgety Feet”? As for my mental song loop, it was “I’ll Build a Stairway to Paradise,” presented as Henri’s music-hall fantasy. Backed by the ensemble in Keith Nelson’s snappy costumes, it is Young’s eleven o’clock number, which he deserves. After all, Henri doesn’t get the girl.

Through Nov. 24 at Westchester Broadway (Dinner) Theatre, Elmsford, NY. Performances Wed. thru Sun. at various times. For information and tickets: www.BroadwayTheatre.com (Prices include lunch or dinner from an extensive menu.)