Organs, Oral and Orgasms, Oh My: “Get On Your Knees”

Let us clarify up front: the title of Jacqueline Novak’s 90-minute theater piece is not an invocation to prayer. Rather, it refers to a position oft identified with the performance of oral sex, a phrase Ms. Novak scorns in favor of the street term for the act. (Bear with me, folks.)

Pacing up, down and across the stage of the Cherry Lane Theatre in a gray tee shirt and black jeans, she describes that act and the associated organs frankly, including her own introduction to it. And while the presentation is tightly scripted, it comes across as a stream-of-consciousness rumination, with no details too graphic or intimate to share.

Unlike, say, Chris Rock, whose somewhat distracting stage-roaming she mirrors, Novak’s text is relatively free from the certain coarse word that permeates stand-up today, an upgrade that I find refreshing. She invokes it sparingly, in one case punctuating a point about dating inequality that resonates pointedly with young women in the audience.

That demographic, young women, would seem to be Novak’s target audience. Nonetheless, her female-centricity resonated to my removed (by gender and age) sensibilities. That moment when you hear something expressed uniquely and realize you knew it all along? I experienced several such epiphanies during “Get On Your Knees.”

A riff on the male gaze begins “Being trapped in the female form is a burden…you leave the house with things to do…you’re forced to bring it along.” A teen-aged girl ruminating about her boyfriend’s father’s attitude toward her is razor-sharp, and her defense – or rather, explanation, of the frequency of “like” in teen-talk changed my mind-set about that habit for good. I’m, like, okay with it now. 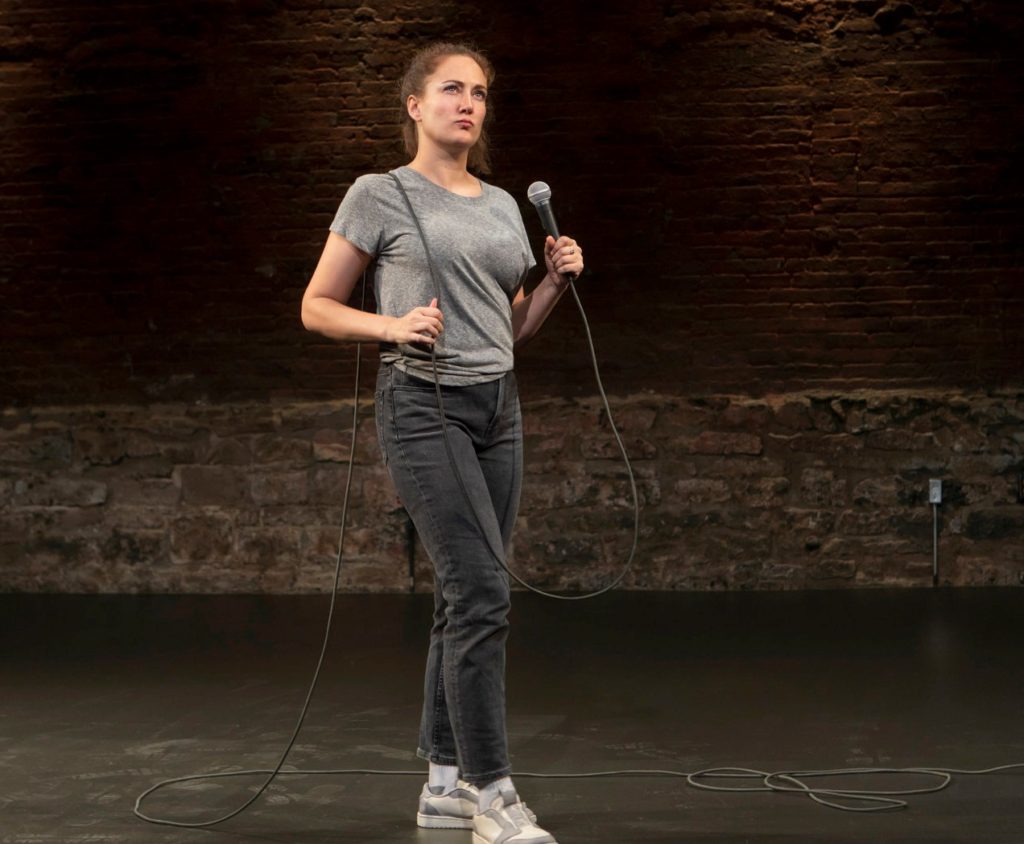 In smart and amusing observations, Novak debunks some accepted concepts and terminology surrounding both genders’ genitalia. “Erection,” for example, is hardly accurate, considering its connection to an architectural project that one might enter and exit. “No one’s going in that building,” she points out. “It’s not up to code.” And while imagery for the female parts also takes a hit, a goodly portion of “Knees” is a treatise on the penis: how it looks and behaves and reacts. The word itself is analyzed: its first syllable spawns euphemisms, but “no one even acknowledges” the second syllable. She prefers a hard-consonant substitute.

Smoothly directed on a bare stage by John Early, other bits include an innovative – and hysterical – deconstruction of the missionary position; a forthright description of her own (heterosexual) relationship; why she wants to come back as a ghost; and an illuminating discourse on the difference between male and female orgasms.

A self-proclaimed intellectual, Jacqueline Novak is whip smart. “As a woman of ideas,” she says, “everything from the neck down is beneath me.” But “Get On Your Knees” is not a lesson. Her only goal “is to entertain and delight.” Mission accomplished.