Into Each Life “The Rainmaker” Should Fall: N. Richard Nash’s Play in New Jersey

The theme of the mysterious stranger who arrives on the scene and changes people’s lives has long been a staple of American fiction, never more than it was in the 1950s. That decade produced Shane, who vanquished evil with gun-barrel justice; “Picnic”’s Hal Carter, who outed a few midwestern women’s libidos; and Harold Hill, the rascally Music Man. There was also the title character of N. Richard Nash’s “The Rainmaker,” Bill Starbuck, a con-man whose roguishness is transparent even to those who willingly fall for his pitch.

The 1954 play ran only 125 performances on Broadway, but it had a sturdy after-life on Regional and community stages. I saw it years ago with Farley Granger in the title role, and then a few other times, most recently the 1999 Broadway revival with Woody Harrelson. Seeing it again last week at the Shakespeare Theatre of New Jersey, where it runs through August 18, was like re-kindling an old friendship. The play is dated in time, place and style, but it holds up, especially when its time, place and style are honored, as here.

Set on a western ranch in “a time of drought,” the drought that plagues the Curry family is metaphor for their dried-up lives. The widowed patriarch H. C. oversees the family in name only. His inflexible elder son Noah tends the books and rules the roost, keeping a tight rein on his younger brother Jimmy. The three are focused on staving off spinsterhood for repressed daughter Lizzie by pairing her up with recalcitrant Deputy Sheriff File. 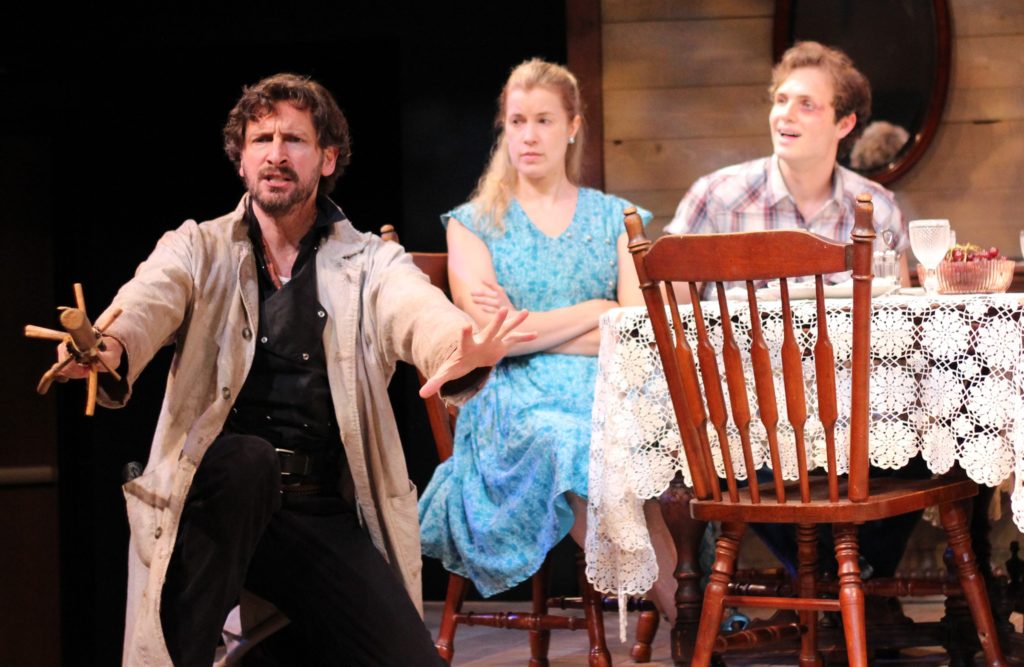 Into the Currys’ lives strides Starbuck, a glib, charismatic rainmaker. He fast-talks the desperate family out of a hundred dollars with the promise of rain. No out-and-out spoilers here, but if you think within minutes of Starbuck’s entrance that Jimmy ends up standing up to Noah, that Noah himself softens a bit and that Lizzie lets her hair down (literally) before coupling-up with File, well…you’re on the right track.

Those familiar with the 1956 movie probably remember Burt Lancaster’s toothy Starbuck as the focal point, even though Katharine Hepburn is a wonderful Lizzie. The male role is indeed dashing, but Geraldine Page reportedly owned the original against Darren McGavin, and Jayne Atkinson was Tony-nominated opposite Harrelson.

Fittingly enough in today’s social climate, Monette Magrath’s Lizzie is the centerpiece of this production, opposite the worthy Anthony Marble, whose Starbuck seduces the entire Curry clan…in one way or another. 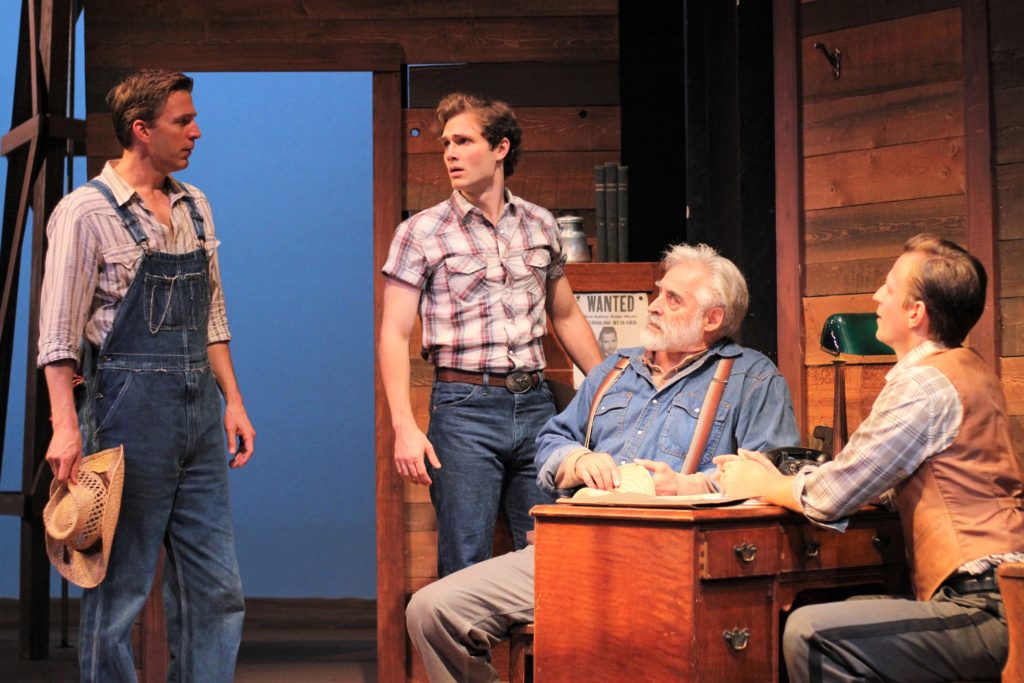 Lizzie buries her unhappiness under forced acceptance of her impending old-maid status and her oft-proclaimed ‘plain’ appearance. Magrath reveals all the layers and really does seem plain – until she isn’t. It is a lovely performance that invigorates and informs her two-scenes with family members and the iconic one in the tack room with Starbuck.

Mark Elliot Wilson is the ideal weather-worn H. C., in appearance and exasperated-father demeanor. He and Nick Plakias, fine in the essential supporting role of Sheriff Thomas, are right out of central casting, lending authenticity to the setting.

Isaac Hickox-Young is an exuberant Jim, who grows up in the course of one day. If there’s a sort-of villain in the piece, it is thorny Noah, whose treatment of Lizzie ranges from dismissive to outright nasty. The words are there, and they can hurt, but as played by Benjamin Eakeley – and directed by Bonnie J. Monte – he’s more killjoy than provocateur. Corey Sorenson finds just enough depth in repressed Deputy File to make his decisive moment resonate. 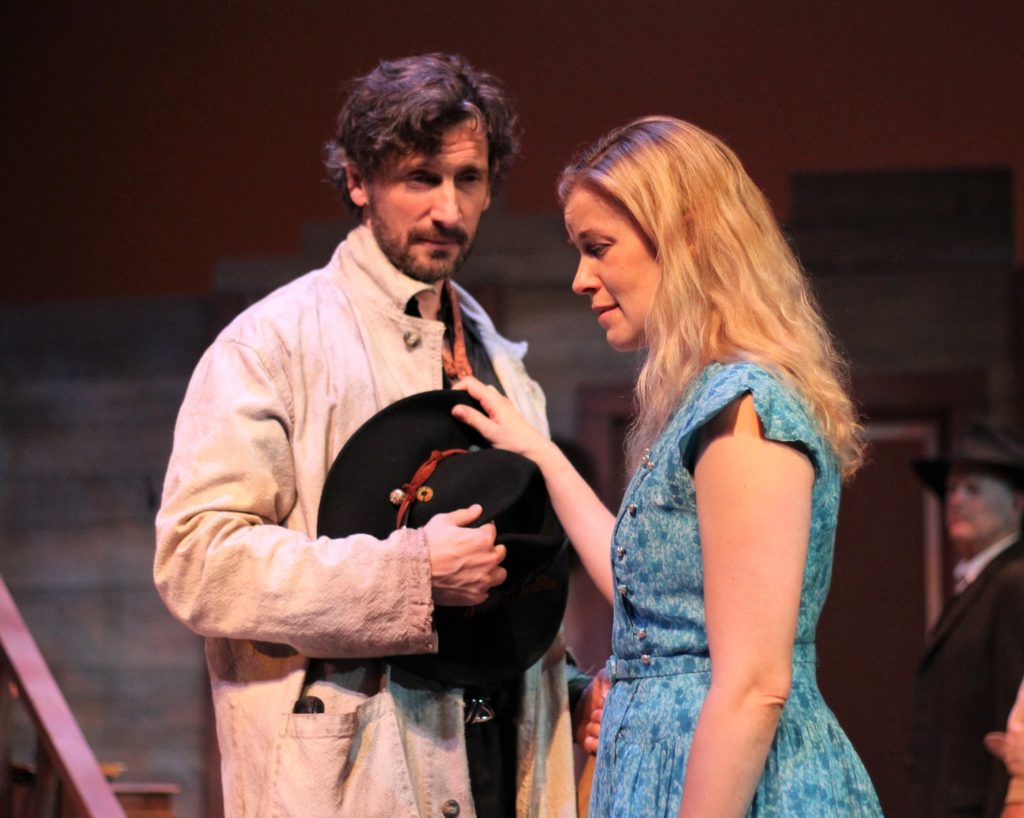 Ms. Monte also designed the excellent ranch-interior set, with a stage-left are that doubles nicely as the sheriff’s office and the tack room. The costumes (Hugh Hanson) are generally period-authentic, if rather tidy for working ranchers, and Starbuck’s greatcoat is more spaghetti western than Depression-era America.

The play is perfectly constructed. We learn all we need to know about the characters in director Monte’s languidly paced first act, and watch with satisfaction as their relationships evolve in the second. Playwright Nash’s gift lies in how well we know these people a scant two hours after encountering them as strangers. “The Rainmaker” is an unabashed feel-good play, a characteristic in short supply these days, on or off the stage. Hasn’t it rained on our parade enough?