The best element of the musical “I Spy a Spy,” running through September 21 at the Theatre at St. Clements, is its music. Sohee Youn’s diverse score is mostly easy-to-take rock and jazz, peppered with Latino, middle Eastern and Russian themes, befitting the ethnic makeup of the characters. And the four musicians who play it, anchored by musical director Dan Pardo’s own versatile keyboard, might constitute the best small pit band off Broadway. 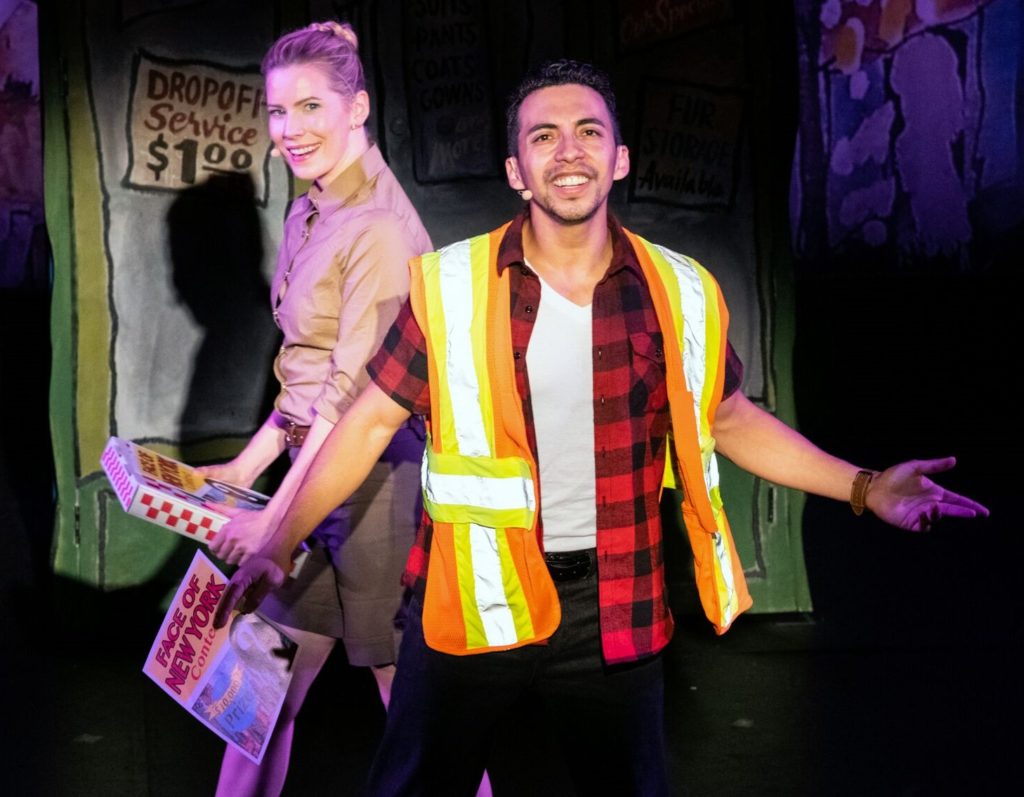 Emma Degerstedt and Andrew Mayer in “I Spy a Spy” [Photos: Russ Rowland]

The character-relevant lyrics, by Jamie Jackson, are generally sprightly, with obvious, but pleasing rhymes. Alina Orlova laments that she is “a walking situation/a human exclamation,” a couplet that pretty much describes Emma Degerstedt, who plays Alina opposite Andrew Mayer as José Rodriguez, whose opposite descriptor is that he’s “The dude with the face/you can’t really place.” Those two do the vocal heavy lifting very well, backed by ten strong-voiced cast mates in a variety of principal and ensemble roles.

James Morgan’s scenic design is an imaginative, if necessarily sketchy, impression of a Hell’s Kitchen neighborhood – un-gritty for a change, with bright-colored vertical cubes that open and close and revolve as locations warrant. Lighting, too, by Michael Gottlieb, is enticing.

Then there’s the book. Co-credited to composer Youn and lyricist Jackson, it’s a mash-up of two spy-themed plot lines, neither of which is plausible enough for realism or witty enough for satire, its assumed target.

Abdul (Sorab Wadia) of Abdul’s Pakistani Pizzeria (and Gefilte Fish Kebobs) and the Korean proprietor (Hazel Anne Raymundo) of Sunny Park Gourmet Deli spy on one another with little rhyme or reason, while the nearby Fluff ‘N Fold laundry is cover for a Russian spy named Cold Borscht (Bruce Warren) and his daughter Alina, aka Cheese Blini. They are soon joined by Beef Stroganoff, completing a lame trifecta, with their phone contact Chicken Kiev not far behind. (Please, get me a Stoli.)

The plot, such as it is, revolves around the store-keepers’ run-in with the U.S. Department of Home Security and the Russians’ efforts to blackmail the mayor of NYC over his tax returns. There’s also a menacing ‘coyote’ to whom undocumented José is in debt and two contests to be decided: The New Face of New York and The Russian Spy of the Year. Along the way, jokes are weak and over-acting is standard, but it wraps pleasantly enough when the diffuse plot lines resolve and (spoiler alert) the couples unite. (Unintentionally comic, they can’t kiss because of the bulby side-mics that curl around nearly to their lips. They settle for vertical cuddles.) 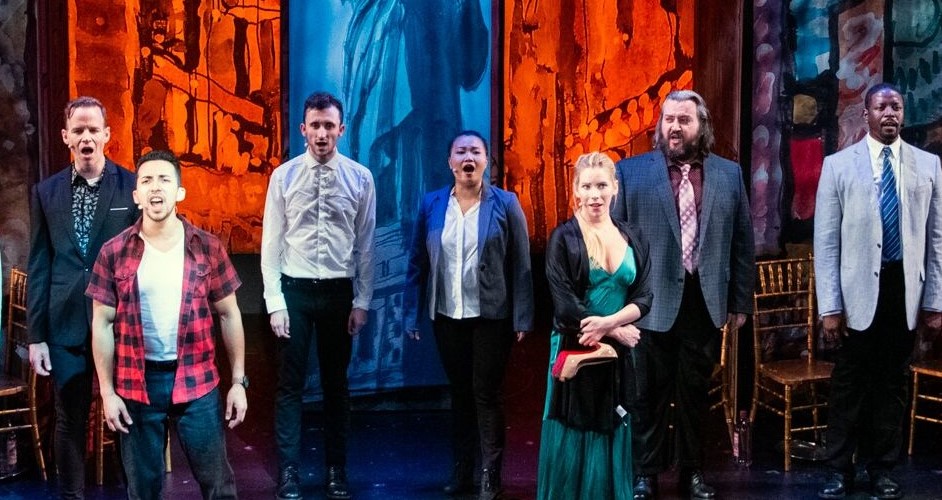 Andrew Mayer and Emma Degerstedt, front, and members of the cast

Besides the descriptive duo-songs noted above, musical highlights include Mayer’s song about José’s “Home” and a melodious duet sung against a Metropolitan Opera aria (I know, but it works). Degerstedt nails “So Long,” Alina’s terrific eleven o’clock number. (She also slays in costumer Tyler M. Holland’s floor-length, shiny green item.)

Bill Castellino’s direction is fine, his minimal choreography serviceable.  Wisely, most of the musical numbers are staged down-front to the audience. The songs and singers, especially Degerstedt and Mayer, outclass the cornball book. Toss the dynamite band into the mix, and “I Spy a Spy” is a welcome summer musical diversion.