Any time someone appears on stage in tap shoes, I’m all in.

Jodi Long brings that footwear and more to “Surfing My DNA,” world-premiering through May 26 at New Jersey Repertory Company in Long Branch. Written and performed by Ms. Long, the hybrid stage piece is half biography (of her parents) and half her own memoir. With that former content split further between the two parents, including their experiences with anti-Asian racism and their show-business careers, the result, while interesting enough, is necessarily diffuse.

What separated Long’s parents from typical mainstream1940s/50s husband-and-wife vaudeville teams was not lack of talent; archived clips of their act, neatly projected on NJ Rep’s backdrop,  allay any such doubts. It was their heritage that set them apart and dictated their bookings. Long’s father was born in Australia to a Scottish mother and a Chinese father; her mother was born in Portland, Oregon, where her Japanese parents had settled. With their dominant Oriental, as it was then called, heritage, Larry and Trudie (their names, really) worked Asian-themed venues in San Francisco, known as the Chop Suey Circuit, before landing some gigs in New York, including a 1951 appearance on the Ed Sullivan Show. (The grainy footage of Ed introducing them as “direct from China” and Larry intoning Chinese-sounding gibberish, is priceless. Agonizingly un-PC, but historically priceless.) Jodi’s narrative through their career, punctuated by her own time-step tapping, is entertaining. 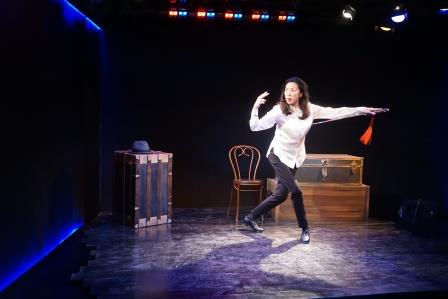 She also covers her parents’ histories, with Larry’s centering on his family emigrating from Australia to the U. S., where he pursued a show-biz career, eventually landing a role  in a road company “Flower Drum Song” that toured on-and-off for ten years. Bye-bye, family.

Her mother’s background is more fleshed out. As a teen, Trudie was interred with her family in the infamous west coast camps where Japanese-Americans – U.S. citizens, mind you – were confined during World War II. Eventually sponsored for release from the camp by a New York Daily News columnist (whose motives remain un-examined), she embarks on an adventurous cross-country train trip, settles precariously in NYC and eventually lands a job as a showgirl at the Mafia-owned China Doll nightclub – for a princely $75 a week. “And that’s how I got into show business,” mom concludes. The segment is the show’s best, both for subject and narration. Trudie’s tale could (should?) comprise a play of its own.

The second hour-long act takes a more somber turn. Long attends the funeral of a family “uncle” in Portland and re-connects with long-lost family in Australia, where she learns of her Scottish ancestry. Continuing in memoir mode, the segment about surfing in Bradley Beach is of local interest, but introducing a litany of drunk and druggie ‘boyfriends’  is clearly TMI. She drops a few F-bombs that dud-out, and her imagined or recalled conversations, in which she does both voices, mostly ramble. 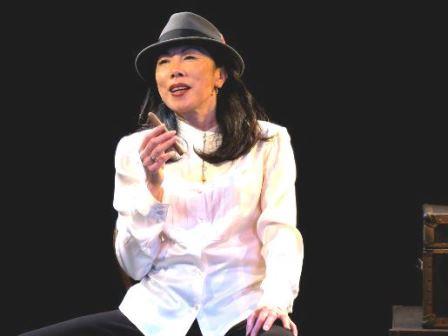 While “Surfing My DNA” is a solo-actor play, Ms. Long is complemented by a musician-cum sound effects fellow, whose skills are as versatile as his instruments. Set against the wall stage left, Yukio Tsuji provides percussive and electronic accompaniment for the musical vignettes and some hauntingly  mood-enhancing atonality on the shakuhachi, a 7th Century Japanese, longitudinal, end-blown, bamboo-flute. (Thank you, Wikipedia.)

Notwithstanding a couple exceptions over the past twenty-two years, plays premiering at New Jersey Rep do not emerge fully formed. The company’s raison d’etre, after all, is to provide authors with the opportunity to see their plays “on their feet” for the first time and to initiate editing and re-tooling, a process that most often involves pruning.

Jodi Long is two-thirds of the “Surfing My DNA” triumvirate. Together with her director Eric Rosen, playwright/performer Long now has a golden few weeks to carve out the 90-minute presentation aborning within “Surfing My DNA.” (Keep the tap shoes in.)