Not All The Talk In “Happy Talk” Is Happy

There is a limit to how much can be revealed about The New Group production of Jesse Eisenberg’s “Happy Talk,” without crossing into spoiler territory. That there are five characters is safe enough (they’re all in the Playbill), although one’s entrance half-way through alters the 105-minute play dramatically. What had been a humanistic, quasi-comedic character study takes on a shadowy texture that continues to darken up to the denouement.

That shift in tone is abrupt, but not without some foreshadowing, as when a mystery story, once solved, yields its clues retroactively. “I didn’t see that coming,” you think, until “oh yeah” sets in. 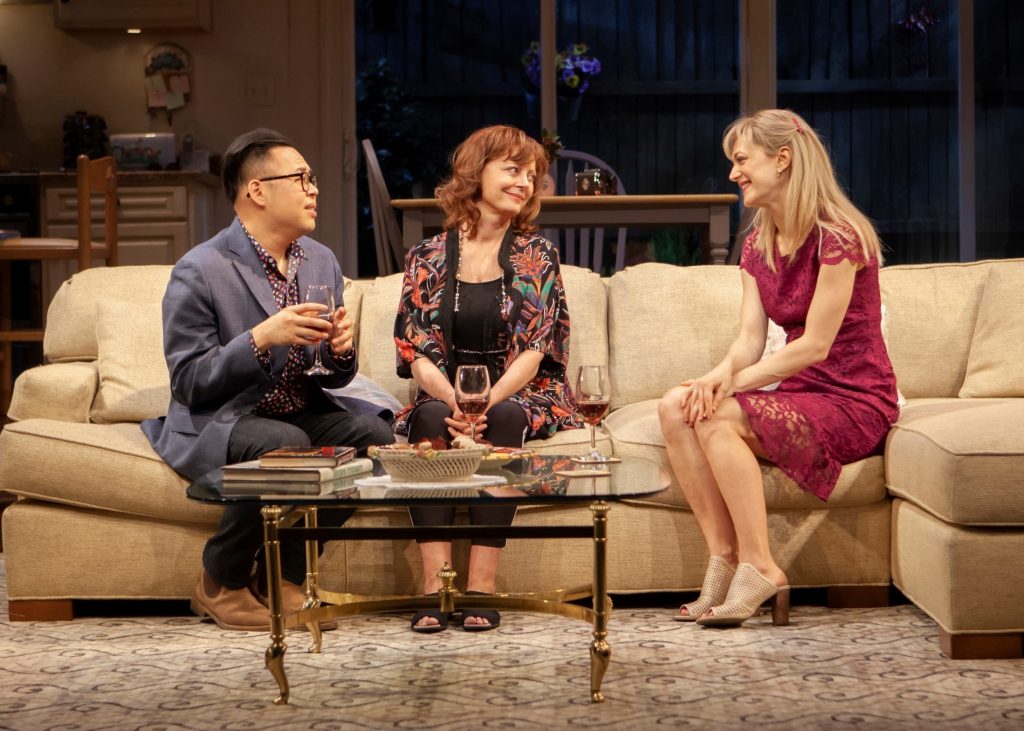 The play marks Susan Sarandon’s return to the stage after a ten-year hiatus (“Exit the King” on Broadway in 2009). Here she’s Lorraine, a nearing-60 whirlwind, according to the playwright, whose delusions of diva-dom are not diminished by the ordinariness of her circumstances. “I was a little skeptical,” she announces in her second speech, “of doing ‘South Pacific’ at the Jewish Community Center,” although, she continues, “Bloody Mary is just the most dynamic character in the show.” (Veiled exposition is not Eisenberg’s strong suit.) Lorraine buys into her Community Theatre stardom, and Sarandon would have us on board as well. Lorraine’s extended monologues reveal a flighty and unrealistic character, whom Sarandon plays more grounded than the context would indicate. 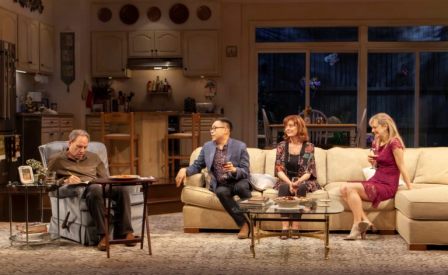 Lorraine’s household would make anyone want to escape to Bali Ha’i. Her husband Bill (Daniel Oreskes) remains detached from everything around him, rarely speaking or even acknowledging anyone, although he does make it known that “I pay for everything.” “Bill’s supportive of the arts and has a generous pension,” apparently from academia, Lorraine further clarifies, explaining how she maintains her airy lifestyle. And how she affords to pay Ljuba.

Ljuba (Marin Ireland) is the Serbian live-in home aide whose primary duty is caring for Lorraine’s mother, who summons Ljuba (never Lorraine) by a buzzer from her offstage bedroom. Since Grandma’s needs include frequent diaper changes, it is just as well that she never appears.

If Ireland had sought to demonstrate her range over one year, she could not have chosen a better role. Last spring she embodied Alma in Classic Stage’s revival of “Summer and Smoke,” and Ljuba (the j is silent) is as far removed from Alma as Serbia is from Glorious Hill, Mississippi.  Ljuba, undocumented in the U.S., is saving to pay an American to marry her so she can get her green card and bring her daughter over from Serbia; so far, she has accumulated half of the $30,000 going rate. Chattering away in a Slavic accent (not overdone), Ljuba is an endearing blend of energy, charm and naiveté. (Her attitude toward her own accent elicits the play’s funniest exchange.)

Lorraine arranges a match with Ronny (Nico Santos), who is playing Lt. Cable in the JCC “South Pacific.” As if to further stress the vagaries of community casting (and provoke some half-hearted laughs), Ronny is openly effeminate (“as gay as the day is long”) and…Asian. The anti-Joe Cable.

The fifth character, who bursts in mid-play, is Lorraine and Bill’s estranged daughter Jenny. Played full out by Tedra Millan, Jenny, or Darby as she prefers, commands the play for her twelve-minute scene…as she’s supposed to. Self-assured and foul-mouthed, Jenny’s loathing for her mother is unfettered. Try as she might, Lorraine cannot diffuse or override Jenny’s vitriol, which drives Ljuba to distraction.  Lorraine finally orders her daughter to leave, but not before unsavory truths are revealed.

Those truths lead to the unraveling of the relationships laid out in the ultimately unnerving play, which, under Scott Elliott’s obvious direction, could only end the way it does. This is Jesse Eisenberg’s “Happy Talk,” not Rodgers and Hammerstein’s.