A Visit with “The Belle of Amherst” in Red Bank NJ

Something special is afoot at Two River Theater in Red Bank, New Jersey, where Maureen Silliman is embodying Emily Dickinson in “The Belle of Amherst,” William Luce’s one-woman play about the enigmatic 19th Century poet. In the play, Dickinson (1830-1886) shares her thoughts, dreams, snippets of her poetry and even a recipe or two with groups of visitors that you could join before the play closes on May 5. That the reputedly reclusive Dickinson would have been so forthcoming is questionable; regardless, Ms. Silliman’s performance is touchingly sensitive as well as unflinchingly commanding – of the character, the play and, not incidentally, the wide expanse of Two River’s main-stage venue. 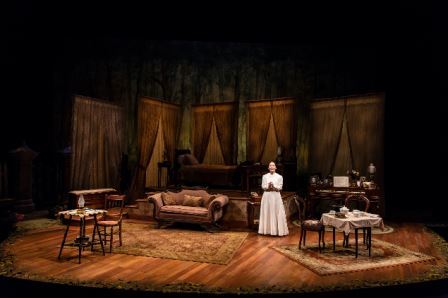 Mr. Luce, now 87, has specialized in mostly solo-actor plays based on real people, among them John Barrymore, Zelda Fitzgerald and Charlotte Bronte, whose 1982 bio-play was written with Julie Harris in mind, as was the earlier “The Belle of Amherst” (1976).  Ms. Harris played “The Belle…” for many years, and comparisons to hers, which I saw in 2001, or to Joely Richardson’s off-Broadway revival (2014), would be presumptuous, but I do not recall either of theirs being as sprightly and energetic as Silliman’s. Nor as ingratiating – as if we really were guests in her home. Miraculously, Silliman is not dwarfed by Harry Feiner’s handsome set, which wants only for the kitchen sink. Her Emily is quite at home, roaming about in a manner that parallels her somewhat rambling narrative, an endearing quality – of both character and actor.

“Forgive me if I’m frightened,” Emily intones in her greeting. “I never see strangers.” Soon enough, we are not strangers. While her near-total withdrawal from social interaction is being increasingly questioned (see below), it frames the play’s characterization and challenges the actor to start there and draw Emily out to where she reveals some deeply-felt emotions, not all flattering. Ambivalence toward her domineering father, for example, is finally admitted, and her hyper-emotional reaction to a death in the family is piercing. Silliman’s immersion in that moment, with her back turned, quiets the auditorium to an eerie degree…into an empathetic stillness. 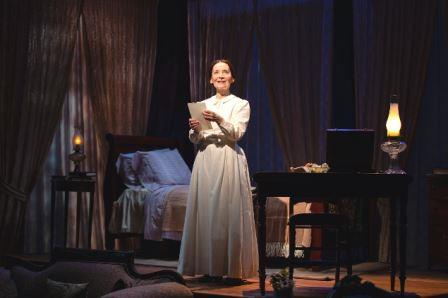 Largely unpublished during her lifetime, some 1800 of Dickinson’s poems were, um, liberated from her stash after her death by self-proclaimed “editor” Mabel Loomis Todd, who heavily edited their free (non-rhyming) verse and difficult (for the time) metaphors. It was not until 1955 that the poems were published as written. Interspersed with Emily’s personal ruminations about nature, family and mostly disappointing ‘outside’ relationships, the modest morsels of verse that Luce included flesh out the woman within the legend. It is not by chance that director Robert Rechnitz, long-time Professor of American Literature at Monmouth University and founder (with his wife Joan Rechnitz) of Two River Theater Company, was able to successfully balance the talents of poet Dickinson and actor Silliman. 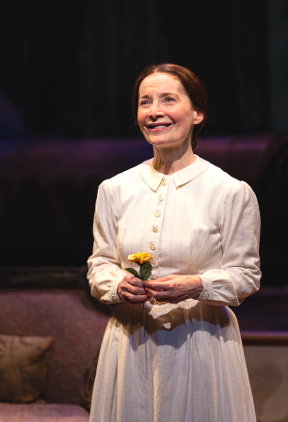 Early on, addressing us as members of her humankind family, Emily declares “I love you and you love me whether you know it or not.” After spending the next couple hours with this Emily Dickinson, we do indeed give her our love. With plenty left over for Maureen Silliman.

[Luce’s play stands as written, of course; but a recent movie, “Wild Nights with Emily,” casts a vastly different light on the poet. Purportedly based on a great deal of research, apparently deeper than Luce’s, the film portrays a more self-assured Emily and depicts the men in her life – her father, her brother and others – as feckless and unsupportive. The film also outs Emily as a Lesbian, which has long been rumored, romantically involved with her brother Austin’s wife, while the above mentioned “editor” Mabel Todd was getting it on with Austin. Clearly, either “Belle”or “Wild Nights” is revisionist. Take your pick.]