“Phantom” in Westchester (not that one, the other one)

While some introductory background is a de facto requirement in a review of the “Phantom” musical that does not append “of the Opera” to its title, be advised upfront that the production at Westchester Broadway (Dinner) Theatre in Elmsford, NY is a top-notch staging of the one-word version of Gaston Leroux’s serialized 1910 novel.

Following their Tony Award-winning “Nine,” composer/lyricist Maury Yeston and librettist Arthur Kopit were working on a musical adaptation of Le Fantome de l’Opéra when news of Andrew Lloyd Webber’s impending version stalled the team’s financing efforts. Lloyd Webber’s, of course, opened on Broadway in 1988 and is still running. Yeston/Kopit’s lay dormant until 1991, when it was resurrected at Houston’s Theatre Under the Stars. With the rights to the Broadway version restricted (maybe forever), Y/K’s “Phantom” has become a staple in the Regional musical theater repertory. This is, in fact, Westchester’s fourth mounting since 1992 of what Maury Yeston calls “the greatest hit never to be produced on Broadway.” (The team’s “Nine” is also widely staged, as are some of Kopit’s award-winning plays. Yeston went on to compose “Grand Hotel” and “Titanic.”)

Comparisons of the two versions are inescapable. Both take liberties; Lloyd Webber’s skips over some incidents, while “Phantom” adds a major character to illuminate the Phantom’s back-story, humanizing him, which either adds to the romance and intrigue or detracts from the other-worldliness. Take your pick. Musically, both are pop-operatic, but where Lloyd Webber’s is sung-through, “Phantom” includes a significant amount of dialogue.  The comparisons are hardly relevant, however; lavishly staged and costumed and beautifully sung by its leads and ensemble, WBT’s ”Phantom” stands very well on its own 58 feet (21 cast members and eight musicians). 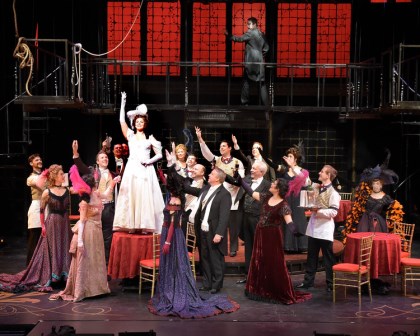 Street-singer Christine Daeé (Kayleen Seidl) is discovered by Count de Chandon (Larry Luck). “All Paris should hear you sing,” he tells her, and it’s off to the Paris Opera House, where her debut is heard not only by the audience, but also by the disfigured, subterranean-dwelling Erik, aka The Phantom (Matthew Billman), who promptly falls in love with her – and her voice. Revealing himself to her, albeit masked, he becomes her vocal coach and, in his perverse way, her agent, securing roles for his protégé through threats and worse. “This Place is Mine,” sings the reigning diva Carlotta (amusing Sandy Rosenberg), but not for long. (You do not want Christine to be your understudy.)

Within the classic tale’s mystique, Seidl and Billman make the unlikely Beauty/Beast romance quite believable. And in this version it is indeed a romance. His feelings for her are obsessive and hers for him are apprehensive, but their mutual attraction cannot be denied. Seidl’s crystal-clear soprano and Billman’s rich baritone match up vocally as well. Her “Melodies de Paris” and “Christine Obligato” are lovely and his “Where in the World” and “Without Your Music” are commanding. Their duets blend beautifully; a series of “Lessons” is especially well sung (and staged), bordering on playful. (Notably, Billman conveys the Phantom’s emotions clearly, despite the three-quarter-cover face mask.) 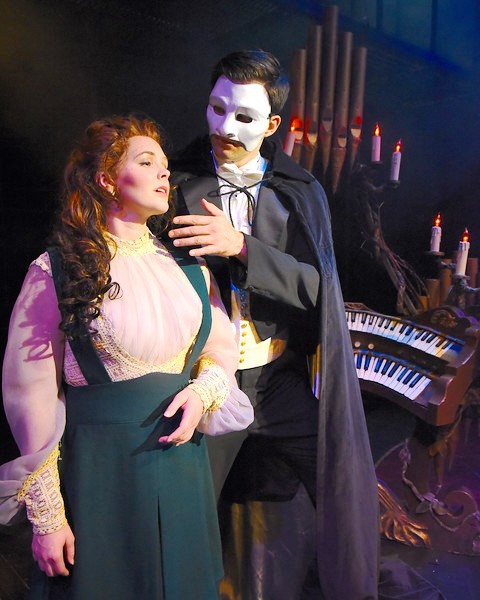 The Phantom’s father, a significant figure in this version, is played by James Van Treuren, whose narration of “The Story of Erik” illuminates the Phantom’s origin as it is being enacted. An overly melodramatic tone weighs down the elongated concluding scenes, but the fault is in the play, not the players. Van Treuren and Ms. Rosenberg (Carlotta) are “Phantom” veterans, having appeared in WBT’s previous productions – Van Treuren in all three. 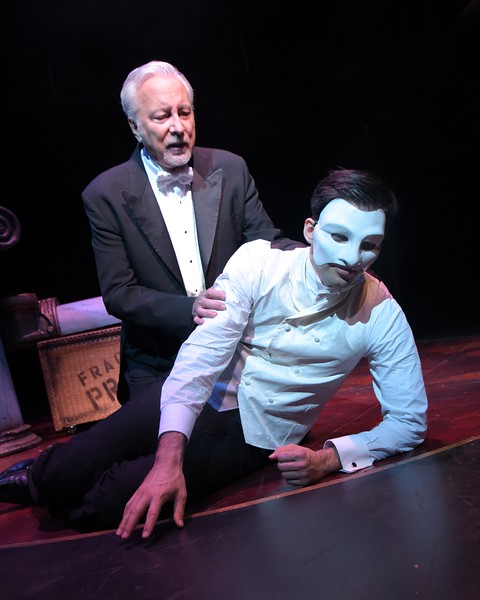 Director Tom Polum and music director Bob Bray are also returnees, a factor likely contributing to the seamless execution on stage and in the pit. The versatile ensemble, a major presence throughout, is excellent, and the ‘Musical Staging,’ which one assumes includes the ensemble’s singing scenes as well as the choreography, is smoothly coordinated by Erica Mansfield (Cassie in WBT’s outstanding “A Chorus Line” last January). 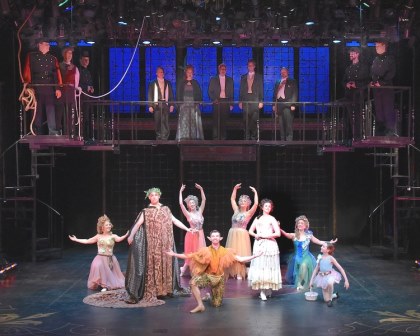 A scene from Midsummer Night’s Dream at the Paris Opera

‘Set Coordinators’ Steve Loftus and Carl Tallent share well-deserved credit for the large, circular platform that elevates from the stage floor to create the illusion of the Opera’s sub-basement. Andrew Gmoser’s lighting design adds the requisite eeriness to the proceedings, and Keith Nielsen’s costumes evoke the period.

So…while Yeston’s score may not be as memorable song-by-song as Lloyd Webber’s (partly because you’ve not heard it over and over), it is pleasing on its own, and Kopit’s book unveils (unmasks?) a more detailed story than the other. “Yes,” I hear you saying, “but is there a chandelier?” Indeed there is. Westchester features an elegant one – plus you get dinner.

Through Nov. 25 and again from Dec. 27- Jan 27 (“A Christmas Carol Musical” plays the interim month) at Westchester Broadway (Dinner) Theatre, 1 Broadway Plaza, Elmsford NY. For performance schedule, including luncheon matinees, and tickets ($59-$89): 914-592-2222 or online at www.broadwaytheatre.com

The “Phantom” orchestra…because, why not?