With eight musicians and a cast of fifteen, “Pamela’s First Musical” is the most elaborate musical produced by Two River Theater Company over its illustrious twenty-five years. The Stephen Sondheim-composed “A Funny Thing Happened on the Way to the Forum” in 2015 also had eight in the pit, but a paltry dozen on stage, and Meredith Willson’s “The Music Man” (2014) was close, with  seven and eleven respectively. Both were excellent, innovative productions. 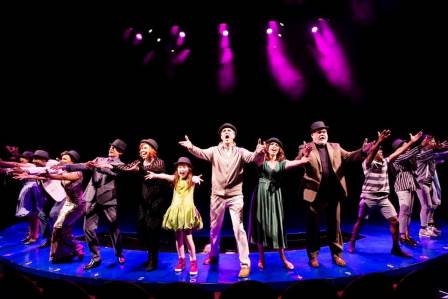 While “Pamela’s First Musical” boasts credentials equal to those precursors, with music by Cy Coleman and lyrics by David Zippel (collaborators on “City of Angels”) and dialogue by Wendy Wasserstein and Christopher Durang (from the children’s book by Wasserstein), the show, if not the production, suffers in comparison; that storied foursome are not at the top of their game. Directed and choreographed by Graciela Daniele (“Ragtime” and others), it is entertaining, but not, one suspects, to the extent it must have been to those creators. Comprised as it is of myriad meta-references to other musicals, it’s essentially an extended inside joke – and one that likely bypasses the ken of those whose fandom began around the time of “Rent.”

“Something Rotten,” for comparison, while similarly quip-laden, is an inventive conjecture of the origination and the putting on (in both senses) of the Musical Comedy form. “Pamela,” which features an intentionally inept musical-within, deconstructs the form with relentless digs, many of which are admittedly amusing. Name-checks include Carol Channing, Liza, Betty Comden, Sardi’s (with wall-caricatures), an extended “Sound of Music” riff, a knock-off of “A Chorus Line” curtain call (third such I’ve seen), and dozens more. Point is, if you don’t know musicals – really know – you may wonder huh? If you do know, Enough already cues in after an hour or so of its 100 minutes. (It’s not so much the quality that’s wearying, but the quantity.) 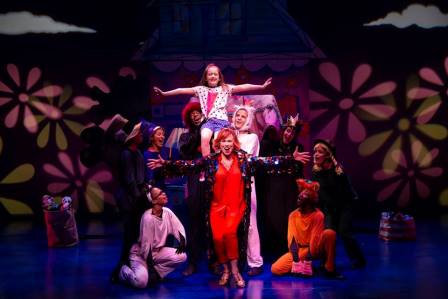 Eleven-year-old Pamela, played with natural charm, clear tone and a minimum of the cutes by eleven-year old Sarah McKinley Austin, is the proverbial square peg, yearning to be “Where All the Pieces Fit” (her theme, very nicely sung and acted). Moping through her birthday party, she is spirited away by her Auntie M…oops, her Aunt Louise (the wonderful Carolee Carmello), to Times Square (not quite “Guys and Dolls”) and into an insider’s view of Musical Theater Land. (“There’s unique…then there’s eccentric; that’s your Aunt Louise.”) ‘Spirited’ away is apt, with portions of Pamela’s adventure taking place in her head. A spate of show-biz caricatures appear, with meta-inspired names. Do the math: there’s diva Mary Ethel Bernadette and her leading man Nathan Hines Kline, neatly spoofed by  Andréa  Burns and Howard McGillin; director/producer Hal Hitner (Michael Mulheren, with glasses perched high on his forehead – get it?) and David Garrison as theater-owner Bernie S. Gerry (figure that one out, “Rent” folk). Bernie S. has the most unkindest song of all; “I Know What I Like” is a breathless patter-putdown of theater critics, whose scathing lyrics, um, escape my memory. (Ha! It’s a terrific number that Garrison executes to perfection.) 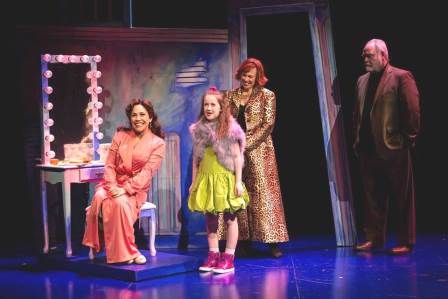 Everything turns out okay. Pamela’s widowed father (also Howard McGillin) accepts his daughter’s theatrical illusions, in a song actually titled “You Make Me Proud,” and then he dumps his overbearing fiancée (a mock of Captain von Trapp’s Elsa) in favor of – wait for it – Mary Ethel Bernadette!

While “Pamela’s First Musical” has been presented in concert, this is its first full production, having been delayed by the deaths of Cy Coleman in 2004 and Wendy Wasserstein in ’06. And a striking production it is, with eye-catching sets by the team of David Gallo and Viveca Gardiner; appropriately bright lighting by David Lander; and, excepting Pamela’s awkward dress, Gabriel Berry’s otherwise sharp-looking costume selections. Ms. Daniele’s direction and choreography make good use of Two River’s wide stage and the ramp that curves around music director/conductor Gregory J. Dlugos’s savvy orchestra.

[Some years ago, I saw Carolee Carmello as Oolie in the closing performance of Cy Coleman and David Zippel’s brilliant “City of Angels” on Broadway. During the long run, she had replaced Dee Hoty, whom I had also seen when the show first opened. Now, Ms. Carmello is appearing in “Pamela’s First Musical” at Two River in Red Bank, while Ms. Hoty is in “Fern Hill” at New Jersey Repertory in Long Branch, a neighboring town. Meeting each of them two weeks apart on their respective opening nights was a real treat. I know what I like.]