A playwright and play to reckon with: “Agnes” off-Broadway

“I don’t think I know the difference between sexual harassment and flirting” might not seem like a ground-breaking admission, but as spoken by Charlie in Catya McMullen’s outstanding new play “Agnes,” running through September 29 at 59E59 Theatre, it registers as profoundly moving. Twenty-something Charlie’s quest for his first sexual experience, you see, is hindered by his social awkwardness, precipitated in turn by his being on the Autism spectrum. During an edgy game of ‘Truth’ with his housemates, who include his sister June, her live-in girlfriend Elle and their happy-go-lucky roommate Ronan, Charlie is asked to describe his sexual fantasies. “To have it,” he promptly responds. 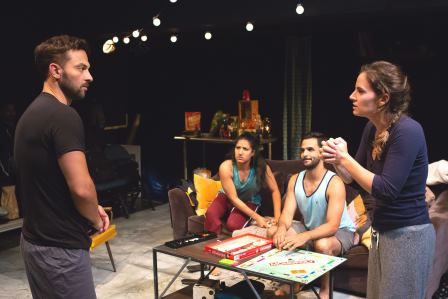 The four are holed up in their NYC apartment against the vagaries of hurricane Agnes, which is buffeting the city with high winds and sheeting rain. (Agnes is, of course, a metaphor for the tumult that develops onstage; watching the play with hurricane Florence dominating the national news was an eerie coincidence.) June is cramming survival supplies into cabinets; Charlie won’t tell where he’s been the past two weeks (“I’m entitled to privacy”); and Elle is trying to study for her Med School entrance exam. (“I miss college. I never had to learn anything in advance in college.”) Ronan, who was dumped after he bit his girlfriend’s boss’s leg at a party, announces that he has invited erstwhile family ‘frenemy’ Anna to hunker down with them. (The leg-bite story is a beaut.) 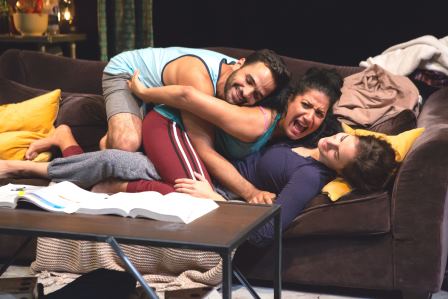 It soon becomes apparent that Anna, who has a history with them all (except Elle), will rival Agnes in the natural disaster department. Apparent, yes, but not predictably unfolded. In a prime example of Shakespeare’s What’s past is prologue, each character’s past affects the present: what they say and do and how they interact. And all of it – the ‘before’ revelations as well as what bubbles up in the present – is written and acted with unself-conscious naturalism. This surely is the way openly frank young people relate. The language can be coarse, but it doesn’t offend; there’s an enviable atmosphere of acceptance, even when goals and standards are at odds. There’s an underlying sexiness to much of it, and a couple of intimate encounters as well. (Those scenes are no-doubters, but not indiscreet.)

The five roles are equally featured; no one stands out, really, because they all do. Charlie’s condition is relevant, but is hardly mentioned, save for when June asks him how he gets away with limiting phone time with their mother to less than a minute. “What’s your secret?” she asks. “Aspergers.”  Beyond that, evidence of Charlie’s difference from his siblings is in some behaviors, enacted with sensitivity and nuance by John Edgar Barker. 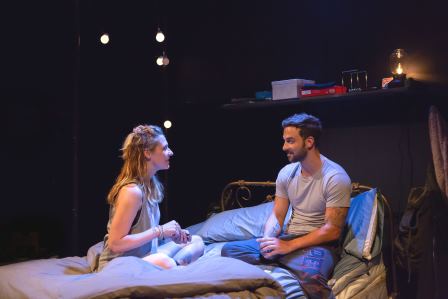 Laura Ramadei captures June’s frustration with Charlie’s issues without a sliver of doubt about her love for him, which also informs her complicated relationship with Elle, played with wry humor (and frustration) by Mykal Monroe. Ronan is a larky piece of work. “If he had a tail he’d chase it,” notes the playwright; Hiram Delgado plays him just so. Anna tries to disguise her underlying insecurities with a bold and sassy veneer, an effort doomed to failure. Claire Siebers, however, successfully reveals all the layers of the complex young woman. If there is an award for Outstanding Ensemble Acting (and there is one), this quintet is an early favorite.

Under Jenna Worsham’s excellent direction, the relationships stay in focus through smooth and rocky; tempers flare, but are never out of control, and the physical staging (on a small playing area) is artful in itself. The play calls for three bedrooms. Angelica Borrero’s apartment set includes one, and you are never in doubt about who’s in whose. (And it’s not always just owner-occupancy.) There are no walls, but Cheyenne Sykes’ effective lighting design obviates the need for them. Dialogue is frequently spoken in tandem, with characters talking over one another or even two simultaneous conversations. Somehow, you hear every word. (If I did, you would.)

Four seemingly unrelated monologues, delivered by these same actors, pop up through the play. They are interesting tales, not overlong, but they remain mysterious – until their relationship to the body of the play is revealed at the end, after which you can go back and connect the dots. That is some good writing.  Catya McMullen is a playwright to watch, and “Agnes” is a good place to start.