“Gettin’ the Band Back Together” makes noise on Broadway

Near the end of “Getting’ the Band Back Together” the (fictional) mayor of (real) Sayreville, New Jersey asks “Who would have thought at the beginning that the Battle of the Bands would come down to these two?” He is referring to the good guys’ band Juggernaut and the nasties’ Mouthfeel. After all, there had been 180 contestant bands, all but three eliminated offstage. (The third, Mini Hall and Oates, is disqualified for faking their short stature. Don’t ask.)

The line is a refreshing joke about the climactic rock-off, but it could refer to every element of the story. Fired from his stockbroker job, 40-year old Mitch (Mitchell Jarvis) moves back into his mother’s house and re-connects with his high school bandmates.  Mom’s house is in foreclosure (past-due three months) by Tygen Billows (Brandon Williams), who besides being a housing Scrooge, leads the band Mouthfeel. (There’s a song “How Does Your Mouthfeel?” Really.) An improbable wager, mom’s mortgage for the plastic trophy from Juggernaut’s high school win over Mouthfeel, leads to the re-formation of Juggernaut and that predictable rock-off. Along the way, Mitch re-kindles with high school squeeze Dani (Kelli Barrett), who – wouldn’t you know it – is dating Tygen…but not for long now that Mitch is back in town!

Band member Sully (Paul Whitty) is a cop who can’t pass the detective exam, which other-cop Roxanne (Tamika Lawrence) can and does. (Cue a Sully/Roxanne twosome.) About a less predictable hookup, suffice to say that bass player Bart’s (Jay Klaitz) big solo is called “Bart’s Confession” and that Mitch’s mom is played by Marilu Henner, who is old enough to have borne a 40-year old (I Googled Marilu), but whose glamor, while mature, belies the years. 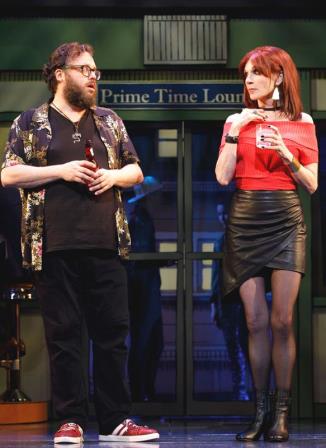 Mark Allen’s music and lyrics are generic/electronic/rock, most played at concert-venue volume. Considering that the book is by co-producer Ken Davenport and The Grundleshotz (which I wish I hadn’t Googled), a twelve-member consortium that helped develop it “through a series of improvisational rehearsals,” the story hangs together pretty well. The Jersey references might limit tourism, but this observer, who came to it through the Lincoln Tunnel, got a kick out of them.

[The town of Sayreville is in the state’s central Middlesex County. Name-checks in “Gettin’ the Band Back Together” include rockers Bon Jovi, born in neighboring Perth Amboy, and Bruce, from adjacent Monmouth County. Among other tags (many are jibes), there’s Senior Cut Day at Six Flags (Amusement Park) and a scene in the Peterpank Diner with a ‘Route 9 Special’ on the chalkboard. The long-revered Peterpank closed for business in December 2015 and was finally demolished just this July, 2018, to make way for a Wawa convenience store/gas station…on Route 9 in Sayreville.] 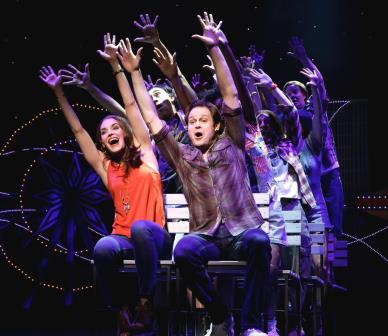 For all its flaws, this “Band” affords some pleasures. The ear-splitting on-stage arrangements, augmented (some supplanted) from the pit, drive worldly concerns from the mind, and two of the couples really are endearing. Robbie Patel (Manu Narayan) and Tawney Truebody (aptly cast Becca Kotte) meet cute over her fondness for Indian food. Their relationship defies some norms, and an enviable one it is.

Teen-agers Ricky (Sawyer Nunes) and Billie (Noa Solorio) are a matched pair. He’s Juggernaut’s freshly recruited lead guitarist and she’s Dani’s rebellious daughter. Both faux-grunge, they finally bond over mutual confessions of nerdy tendencies: he’s upper-middle suburban and needs reading glasses, while she listens to classical music, loves her mother and is a budding electrician. Ricky’s unfettered rap number (at an Orthodox wedding, of all places) stops the show, and Billie’s wiring ability later lights it up.

Under John Rando’s simple and straightforward direction, as the nuance-free material warrants, “Gettin’ the Band Back Together” is acceptable escapism. Which may not sound like much, but like I said, it’s loud. 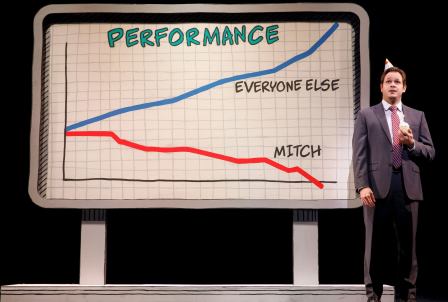 No wonder Mitch got fired!