In 2017, Elizabeth Marvel appeared as Marc Antony in the Free Shakespeare in Central Park “Julius Caesar.” In 2018 women are playing Caesar as well as Antony and Cassius at the Stratford Festival in Ontario, where, to boot, Martha Henry is Prospero. These and myriad other cross-gender castings no longer even raise an eyebrow. 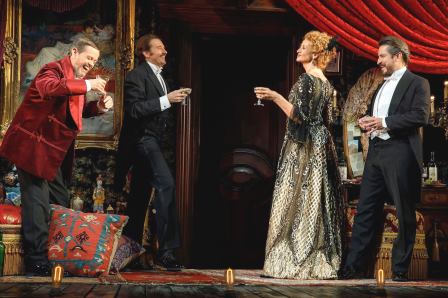 Historical fiction is a tricky genre. Plain history can be academic (read: boring), and inserting identifiable people as principals in pure fiction can be presumptuous, or a copout. “Bernhardt/Hamlet” straddles the extremes brilliantly; the precise inter-action among the actual people may or may not have happened as portrayed, but their involvement in the historical events makes it all plausible. Rebeck’s comedy is period-specific without reinforcing misconceptions about how people related and communicated ‘then’. It is fascinating even just for that.

But there’s much more to admire. Opening on Sarah reciting the Oh, what a rogue and peasant slave am I soliloquy, the first scene captures the essence of the rehearsal process, familiar or instructive depending on one’s own experience. Lines are dropped, sequences are interrupted and motivations are questioned. What makes this display so smart – and so funny –is that we’re dealing here with, arguably, the greatest play ever written. 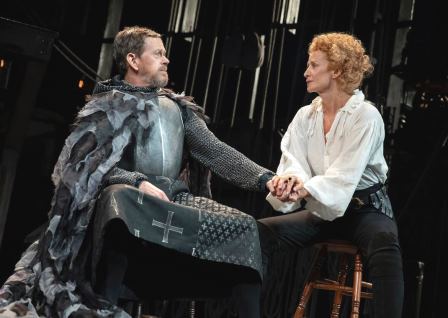 Dylan Baker as the ghost of Hamlet’s father. “…all that armor. Why does he come in armor? I’m his son. Why doesn’t he just talk to me?”

The theme of Sarah’s love/frustration relationship with Shakespeare – and with “Hamlet” in particular – runs through the play.  “I have the words,” Sarah says when she’s cued. “It’s the sense of it that eludes,” a not uncommon lament of actors and audiences alike. She’s particularly vexed by the iambs (ba-BA, ba-BA, ba-BA, as another actor sounds out), an apparent Bernhardt truism, considering that her performed “Hamlet” was a mostly-prose, twelve-scene French adaptation. (No less scandalous for a woman at the time.) Sarah sees the confusion over Hamlet’s age, arising from his being a college student versus his I knew him, Horatio memory of Yorick 23 years after the jester’s death, as “another example of how careless Shakespeare is.” These and other seeming put-downs are quips, and clever enough, but outweighed by respect and admiration throughout the play. (“No one has more reverence than I,” Sarah says, “for the might of the mighty Shakespeare.”)

McTeer’s tour de force performance lays bare the flaws, foibles and fortunes (as well as the mis-fortunes) of the premiere actress of her day. Variously described (by herself and others) as ‘greatest alive’, ‘arrogant’ and of course ‘divine,’  those cues might just as well have originated in McTeer’s performance as in Rebeck’s play. Whichever, the finished product is a perfect partnership between playwright and actor, who, together, actually make a good case for a female Hamlet. Director Moritz von Stuelpnagel completes a triumvirate; his direction brings out the best in both women.

Bernhardt may or may not have been lovers with Edmond Rostand, as is depicted, but he did write plays for her, up to and including his masterpiece “Cyrano,” which Sarah declined. (The shallow Roxanne? Hardly.) Jason Butler Harner is an ideal Edmond, alternately defending and trying to dissuade her. As the actor Constant Coquelin, who, as he reminds us, had played Hamlet four times, Dylan Baker transitions smoothly between Sarah’s trusted co-actor and that actor’s roles as The Ghost and Polonius. 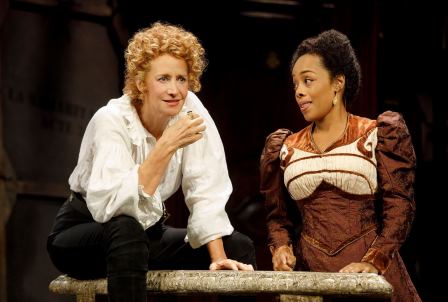 A rehearsal scene with Hamlet and Ophelia “going at it” is very amusing and, in their definitive enactment, fits with text. Ophelia might be “a prop, mostly,” according to Sarah, but Brittany Bradford’s sensitive Lysette is much more than a prop. Sarah’s compliment to Lysette on her performance strikes an emotional chord that belies the virtually tossed-off remark.

Others in the cast are equally effective, including Nick Westrate as Sarah’s adult son and Ito Aghayere as a character whom no one else in the play – or the audience – expects to appear.

“Why shouldn’t I play Hamlet?” Sarah says. “I am perfectly suited. Nobody cares about his masculinity. So called. They care about the magnificent nuance of his heart.” Sarah Bernhardt was indeed the first on-record woman to play the Melancholy Dane…in that prose adaptation, but still. “Hamlet is Shakespeare himself,” she declares. “It is why every actor hungers after him.” Imagining Janet McTeer satisfying her Hamlet hunger with the ba-BA, ba-BA, ba-BA iambs intact is a consummation devoutly to be wished. 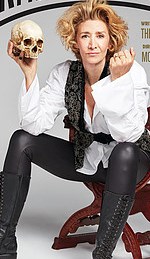 Mark Twain wrote: “There are five kinds of actresses: bad actresses, fair actresses, good actresses, great actresses. And then there is Sarah Bernhardt.” The Divine Sarah died on March 26, 1923 at age 78. Her mammoth funeral procession brought Paris to a standstill. 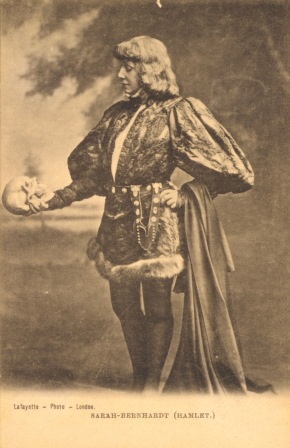