Welcome Aboard “A View from the Bridge” in Brooklyn Harbor

Playwright Arthur Miller maintained a lasting interest in his own plays, frequently popping in to productions unannounced. (I once spotted him at a performance of “Death of a Salesman” in New Jersey.)

Miller’s 1955 “A View from the Bridge” was inspired by a tale told to him by a Brooklyn water-front worker who had known the protagonist’s real-life prototype. The play was poorly received originally, but “while watching a performance,” Miller later wrote, “I saw my own involvement…suddenly the play seemed to be mine and not merely a story I had heard,” and he set about revising it. The result was – and remains – a stirring portrayal of a man’s psychological dilemma and the effect it has on his close and extended families. The fine Brave New World Repertory Theatre production is faithful to the playwright’s image and intent.

Brooklyn longshoreman Eddie Carbone and his wife Beatrice (Rich O’Brien and Claire Beckman) have raised Bea’s orphaned niece Catherine (Maggie Horan), who is now 17. Eddie is way over-protective, masking intense longings that only he and Catherine fail to recognize: she in her sheltered naiveté and Eddie in his willful unawareness. Beatrice, women’s intuition incarnate, is constrained by her role in a 1950s patriarchal marriage from broaching the taboo subject.

We are made aware at the start by neighborhood lawyer Mr. Alfieri (Joe Gioco), who addresses us periodically, that the situation will “run its bloody course.” It is just a question of through what means…and to what end. Then the family takes in a pair of illegal-immigrant brothers from Italy, and the attraction between Catherine and Rodolpho (Jacob Dabby), the younger “submarine,” sets that course. As the play progresses from there, the ominous becomes obvious, and much as we might prefer a resolution that spares us emotionally, we know in our hearts that is not to be. 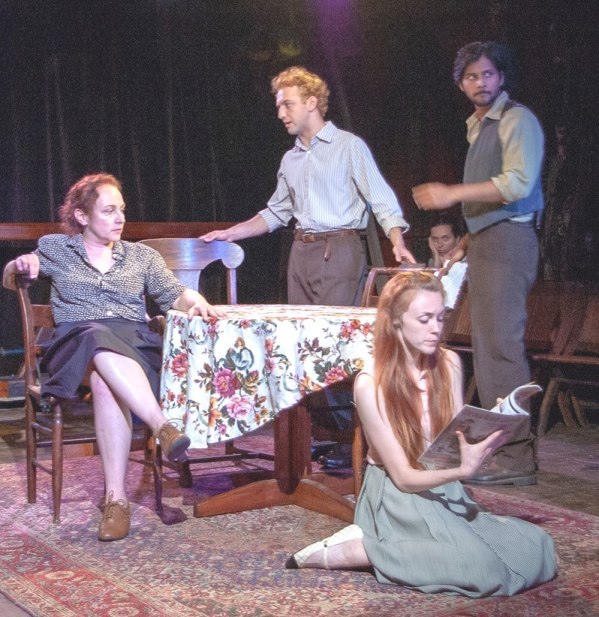 Brave New World specializes in site-specific productions, and mounting “A View from the Bridge” on a barge actually afloat on the Red Hook, Brooklyn waterfront, is inspired. The ‘Waterfront Museum & Showboat Barge’ is covered over and cleaned up some from its seafaring days, but its original weathered deck and spars are intact. One can only wish that Miller, who died in 2005, were still around to sneak up the gangplank into a performance.

Seating on three sides is as close to the action as you’ll ever be; at times you could reach out and touch one or another of the characters, and Alex Dmitriev’s understated direction (nothing is forced) is a perfect fit for the space…and is reflected in the naturalistic performances.

Judging by their names, O’Brien and Beckman are hardly Italian, but their mastery of the ethnic Brooklynese argot, in which much of the dialogue is written, is spot-on. (Run-on sentences and the recurring relative pronoun “which” are particularly flavorful.) The two actors make Eddie and Beatrice’s marriage a reality. 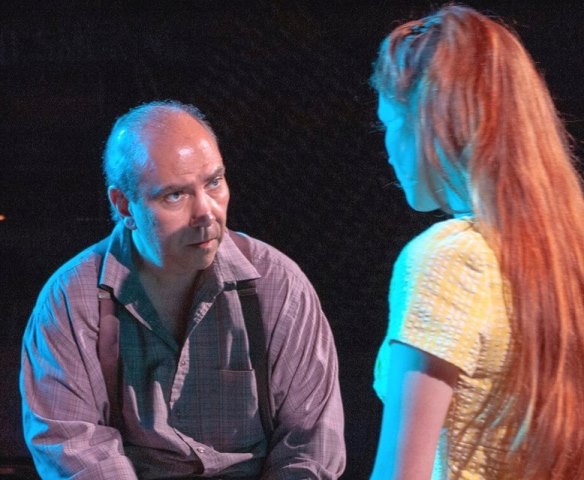 The physical aspect of Catherine and Eddie’s interaction is played down (I’ve seen it with lap-sitting and some quasi-casual touching), but Catherine’s unconscious allure comes across in Ms. Horan’s playing, as does her budding awareness of it in scenes with Dabby, whose off-the-boat demeanor and accent are very well played. His older brother Marco is the fulcrum on which the “bloody course” takes its final turn; Ram Kanneganti is terrific in the role. He captures Marco’s quiet reserve and confident strength (of body and character) perfectly. His first-act curtain gesture – a magnificent Miller moment – is gripping. (Wishing it were staged here more center may be a quibble, but there it is.)

Mr. Alfieri is the playwright’s stand-in, keeping us aware of the tale’s inexorable downward arc. Joe Gioco personifies his street-wise intuition and his frustration over his inability to alter the flow. Smaller but significant scene-setting roles are played admirably by Jabari Brown, Benjamin Sheedy, and Matthew Nersinger. (Ajalon Glover is credited as “Deck Crew.” How often do you see that?)

“Salesman” and “The Crucible” might be Arthur Miller’s crowning achievements, but “A View from the Bridge” is an equally brilliant exploration into recent American social history. “I believe that the common man is as apt a subject for tragedy in its highest sense as kings were,” Miller wrote about Willy Loman. But it applies equally to Eddie Carbone. Don’t think so? Go sit right in the Carbone parlor on a barge in Red Hook while they act it out. You’ll see.

As noted, it’s at/on the Waterfront Barge in Red Hook. Putting 290 Conover Street, Brooklyn NY 11231 into Google Map got me there with no hassle. Performances are limited to 8PM on Saturdays and 2PM Sundays and only through June 24 – a recently added performance is on Friday June 22 at 8PM. Tickets ($25): www.bravenewworldrep.com

About the tech: Everything is necessarily minimal on the playing space, but it all works. Seeing no set designer credit in the program, I asked for a name. Brave New World artistic director Claire Beckman replied:

“As with most BNW productions, we have no set designer. Because we do site specific theatre, the director, Alex, set the stage— with input from Captain David Sharps, who provided nautical artifacts found on the barge, along with the lighting designer [Diana Duecker] & props master [Gabrielle Giacomo]. It’s a collaborative effort, to allow the site to be a character in the production.”   Like I said, it works.