Henry James’s 1903 novella “The Beast in the Jungle” is a melancholy treatise on unrealized romance and thwarted passion that unfolds in James’s characteristically elaborate prose. The same-titled theater piece inspired by the story is essentially a ballet, with intermittent narration and some spare-dialogue passages. Portrayed in flashback, it fleshes out some scenes and locations that are only alluded to in the book and adds developments and even characters that aren’t in there at all. There is also an overlay of sensuality that James scrupulously avoided.

Notwithstanding the story alterations, the overall mood is comparable. A cheery mood it is not, but as devised and staged at the Vineyard Theatre, the Dance Play is an immersive 100 minutes. With an original score by John Kander  (“Chicago” and “Cabaret” with late lyricist Fred Ebb), a book by David Thompson (“Scottsboro Boys,” Steel Pier”) and direction and choreography by five-time Tony Award-winner Susan Stroman (“The Producers” et al), it could hardly be any less. Featuring world-renowned prima ballerina Irina Dvorovenko, superstar Broadway dancer Tony Yazbeck and an outstanding six-woman corps de ballet, this “Beast” should sooth – or at least divert – the staunchest James defender.

Framed as a confessional reverie, the elder John Marcher (Peter Friedman) tells his nephew (Yazbeck) how he had become reacquainted with May Bertram (Dvorovenko) in London ten years after they had met in Naples. Marcher had forgotten the Naples meeting (“Rome, wasn’t it?”), which in the book is a brief encounter, but which is portrayed here as having evolved into an ongoing ardent relationship. Yazbeck portrays young John in flashback, and from Dvorovenko’s first entrance – lovely, en pointe – the chemistry between the two is palpable. (At the ten-years later meeting, John asks May “Where are you headed?”  “Where are you going to take me?” she counters. Roll over, Henry James.) 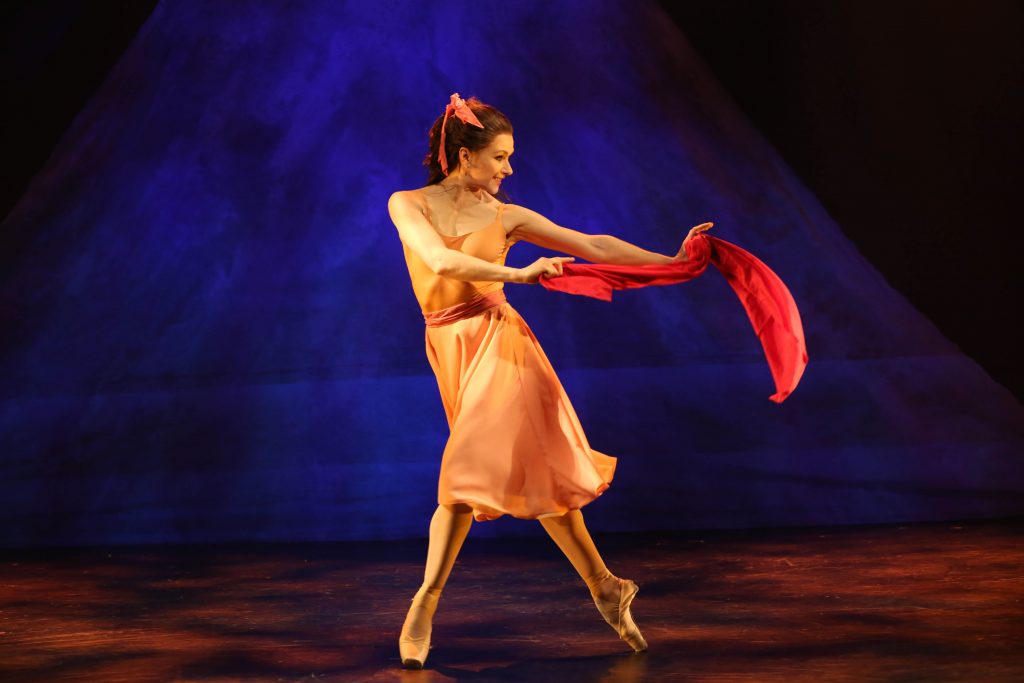 John had told May of his pervasive fear that some catastrophic or spectacular event was lying in wait for him, his “beast in the jungle” that would alter his life in some unforeseen way, which kept him from committing to a lasting relationship (as in marriage) in order to spare anyone else from his feared doomsday fate. And so…they split up.

When they re-connect in London after ten years, it is through May’s doting husband who is purchasing a painting for her from John’s gallery. John and May’s ardor re-kindles and flares up until circumstances force them, once again, to part. (Neither husband nor any marriage is in the book, but the credit does stipulate “inspired by,” not “adapted from.”)

Kander’s rich waltz-infused score is attuned to the variously classical and contemporary dance that weaves through the piece. Conducted by music director Gret Jarrett, nine musicians playing a total of seventeen different instruments create a symphonic sound in the intimate auditorium, while Stroman’s choreographic direction melds the narration and dialogue with the dance passages into a coherent whole.

And those dances: Yazbeck and Dvorovenko’s three Grand Pas de Deux are indeed grand, illustrating different stages in John and May’s relationship. Their separate solo dances are equally expressive of their characters’ desires and frustrations. No words necessary.  May’s water-rescue of a foundering boat, enhanced by Michael Curry’s remarkable scenic effect and Ben Stanton’s evocative lighting, is as realistic as if you were watching from the shore. Curry also designed the costumes, which are modeled to perfection, especially by the corps de ballet women. (In one sustained scene, the six, elegantly poised, pose as marble statues on pedestals.)

The nature of John Marcher’s “beast,” explained near the end (of book and play), is something of a let-down, an assessment with which Jamesian devotees might take issue, but Stroman’s fluid choreography, stunningly executed to Kander’s lush score, is anything but a let-down.

Vineyard Theatre is dedicated to developing and producing audacious new works by emerging and established artists. Among the successes in recent years were “Avenue Q” and “The Scottsboro Boys.” Of significant note, Edward Albee’s “Three Tall Women,” now on Broadway for the first time, had its U.S. premiere at the Vineyard in January 1994, winning that year’s Pulitzer Prize for Drama. Don’t you wish you could have seen it there? Too late now. You can, however, see “The Beast in the Jungle” there. Don’t pass it up.