Country music has never appealed to me. I might leave it on a rental car pre-set, but would never seek it out. If, however, it was all as flavorful as Lauren Pritchard’s music and lyrics for “Songbird,” I could become a fan. Her score is original in more ways than one. Titles like “Black Widow Woman,” “Whiskey Lullabies,” “Highway Fantasy” and a dozen more attest to its honky-tonk bona fides, but that DNA is enhanced by undertones of both rock and jazz.  Coupled with Michael Kimmel’s affecting book (and a nudge from a Century-plus-ago playwright), “Songbird” is a rare blend of foot-stomping rhythms and heart-tugging emotions, that Two River Theater Company is serving up with style.

“Songbird” is based, subtly and effectively, on Russian dramatist Anton Chekhov’s “The Seagull,” an 1896 play you need not have seen or read (or even heard of) in order to appreciate this multi-faceted  hoedown derivative. 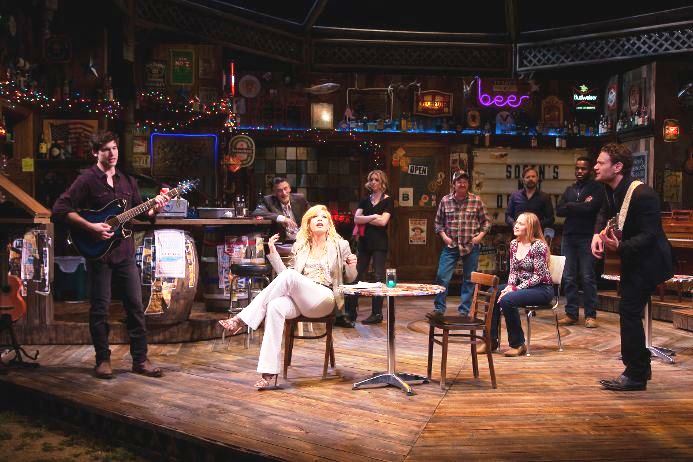 The play opens with Tammy Trip’s (Felicia Finley) Grand Ol’ Opry debut and then flashes years forward to when the now-fading former Opry and touring star comes home to Nashville with celebrity songwriter Beck (Eric William Morris) in tow. Tammy’s son Dean (Merrick Smith), a budding songwriter himself, albeit one with dubious talent at this point, is hopelessly in love with his singing partner Mia (Ephie Aardema), whose infatuation with Beck sets off emotional dynamics that echo Chekhov’s 1896 theatrical family.

The Two River cast is a believably close ensemble. It’s as if their portrayals of family and long-time friends who tolerate one another’s quirks and faults have osmosed into their onstage bonds with one another, a feeling I had when I saw the original production off-Broadway in 2015, featuring, btw, six of this ten-member cast.

Each of the ten is a triple-threat: acting the close-knit characters, singing in solo turns and as a harmonious group, and, in a casting-director’s challenge, accompanying themselves on piano, guitar, violin, bass and, of course,  tambourine.  A notable hold-over from off-Broadway is Andy Taylor (not Mayberry’s) as a saloon denizen (Chekhov’s schoolteacher) whose mellow cello tones underpin Ms. Pritchard’s score, transforming a hoedown band into a country-flavored orchestra.

Tammy’s Opry audition, “Small Town Heart,”  justifies her coming stardom, and while Ms. Finley might read a tad young for the latter-day Tammy, she acts up a storm in the emotionally complex role. She also sings and high-steps like…well, like a still-got-it Nashville star – and plays the spoons to boot! Missy, married to Rip (Deon’te Goodman) but longing for Dean, is played with quiet intensity by Kacie Sheik, dressed all in black (Chekhov’s Masha). Someone observes that she “sings like June but looks like Johnny,” and darned if her “Cry Me a River” (same title, new song) doesn’t evoke a likeness – to June. 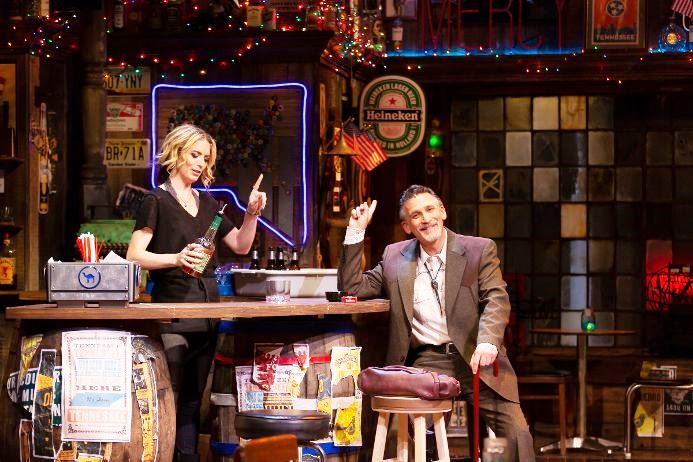 One for the road: Missy (Kacie Sheik) pouring for Soren (Bob Stillman)

Sheltered, innocent Mia is the catalyst around whom much of the play’s emotional content revolves. Ms. Aardema, well-remembered from an Asbury Park dive bar “The Last Five Years” in 2014, captures Mia’s extremes: before and after the caddish Beck uses and discards her (as in Chekhov’s Nina and Trigórin). Merrick Smith gets inside the brooding Dean’s anxiety over being rejected at every turn. “This Place,” he sings, and an unhappy place it is for him.

Bob Stillman is particularly effective as Tammy’s ailing brother Soren, who owns the bar where most of the scenes are set. His number is “That Ain’t Right,” and much that occurs in his bar really ain’t, but set designer Jason Sherwood’s bar itself is a gem, as authentic and atmospheric as the real thing. (And well it should be, considering how much they drink in it!) Aaron Porter’s lighting washes and isolates without calling attention to itself, and Sarah J. Holden’s costumes are worn-in but not shabby.

Music director/arranger/orchestrator Kristopher Kukul is still on the job (thank you!), while Marc Kimelman has signed on to choreograph, a contribution more in evidence here on a much larger playing space than before. That expansion isn’t necessarily a plus; some of the intimacy is necessarily diminished and the play slows in spots, notwithstanding Gaye Taylor Upchurch’s controlled direction. Mia and Beck’s tentative encounter in the outdoor setting is a particularly moving romantic interlude. Only later do you realize that they hadn’t actually touched. Ms. Upchurch’s handle on the busy scenes is effective as well; she and her creative team are as much an ensemble as the cast. 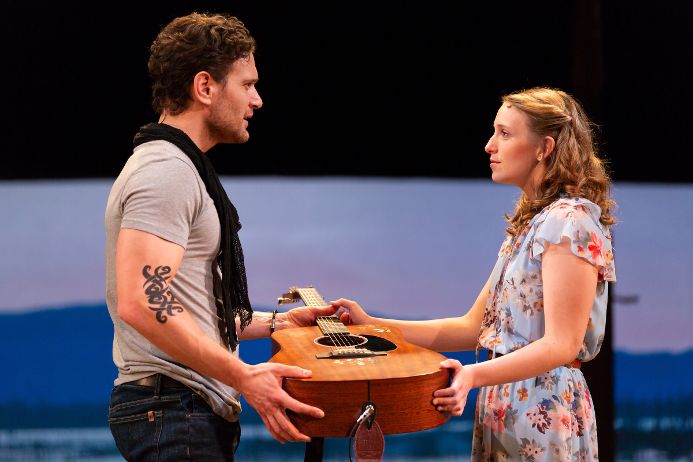 “Songbird” also succeeds in a particular aspect that was important to Chekhov, who labeled “The Seagull” a comedy, despite its serious – even tragic – elements. Like that play, “Songbird” is not frivolous, nor does it skirt serious issues (or change the ending), but it is also more than a bit funny. Family in-joke jibes are tossed off and accepted in good spirits.

There’s rustic profundity, too, as in “Everybody likes daytime drinking; they just feel compelled to lie about it” and one of the best lines ever: “I wish hangovers and orgasms would switch duration.” At just over two hours, “Songbird” is just right.