You’ll know how “Half Time” ends about five minutes in. So what; getting there is the fun part. And “Half Time” is fun. Its premise is simple enough (even to a fault, but anyway): a fictional New Jersey NBA team, the Cougars, is auditioning for a senior-citizen cheerleading squad. The catch, besides the minimum-age-60 requirement, is that their cheerleader routines will be performed to hip-hop rap accompaniment, movements and all.

Sounds far-fetched, right? But hold on; the musical, at Paper Mill Playhouse through July 1, was inspired by Dori Berinstein’s documentary “Gotta Dance,” about auditions in 2006 for the New Jersey (now Brooklyn) Nets first-ever senior NBA hip-hop squad. Twelve women and one man actually became The NETSationals. If that baker’s dozen had included the equals of Georgia Engel, Lilias White, Donna McKechnie and André De Shields, the Nets might have been gone to the NBA Finals. 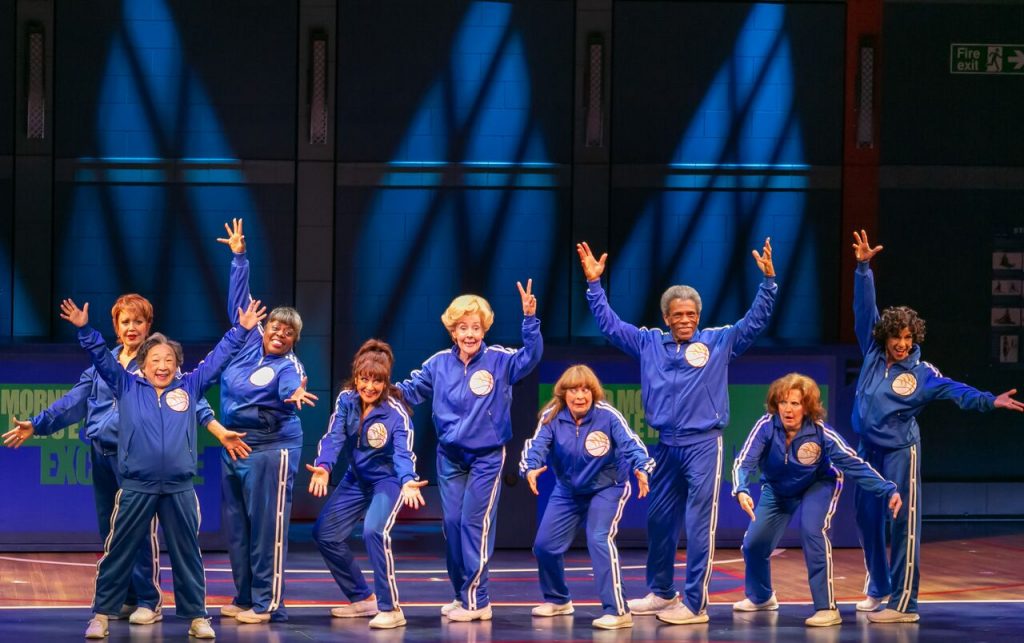 The “Half Time” Hip-Hop Cheerleaders

Clearly, however, the equals of those four and their “Half Time” squad-mates are few, considering their illustrious histories and enduring talents.  Those histories merit mention, but Shakespeare’s “What’s past is prologue” has never been more apt. Their steps might have slowed some over the years (yours hasn’t?) but they are not faking it. In fact, you can’t be so amusing screwing up a hip-hop routine unless you can really do it. Which, as hinted up top, they certainly do at the end.

With a few sentimental reveries and some short-lived character-conflicts, Bob Martin and Chad Beguelin’s book does not get in the way of the “straight” music (Matthew Sklar) and lyrics (Nell Benjamin)  as well as several tunes written by Marvin Hamlisch for an earlier version of the show. The target-audience for “Half Time,” age 40 and up, say, will appreciate each principal’s solo spot, tailored to their particular talents by director-choreographer Jerry Mitchell, of “La Cage” and “Kinky Boots” renown. 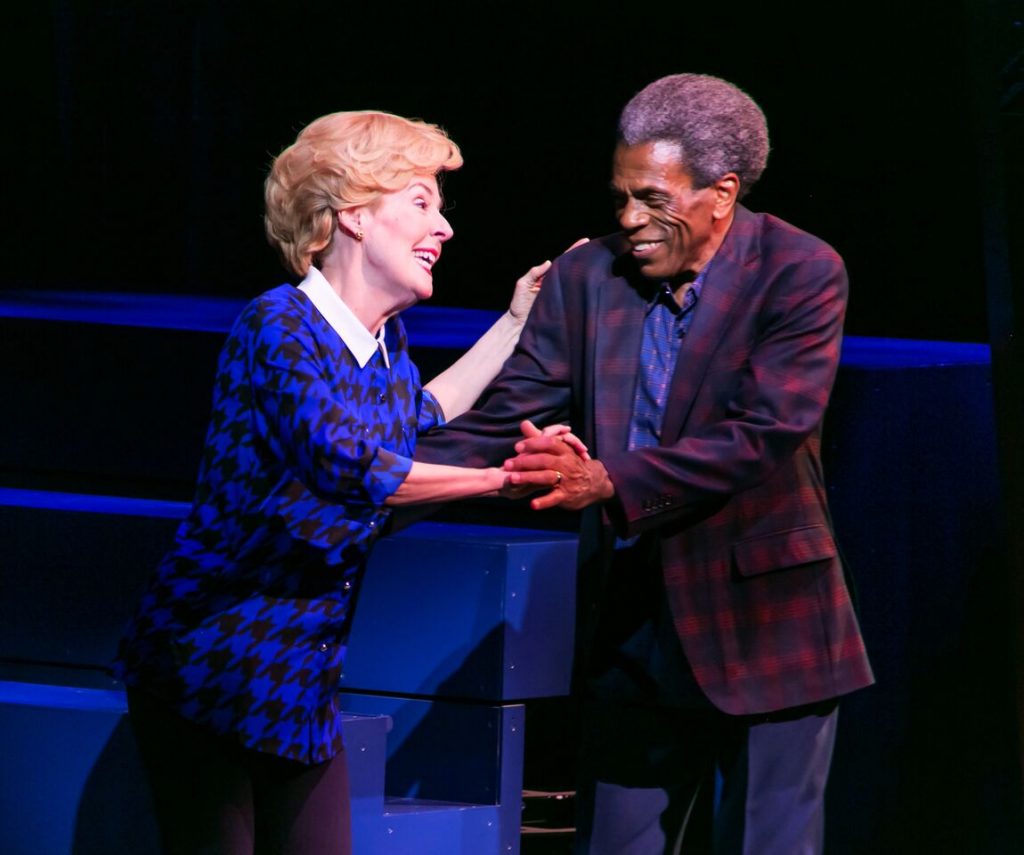 Most impressive among equals is Georgia Engel, the ditsy Georgette of last century’s “Mary Tyler Moore Show,” who emerges as the de facto leader of the troupe. Soon to turn 70, Ms. Engel doesn’t resurrect Georgette; it’s like she never dropped her. Some characterizations fade over time and some endure. Count Georgette among the latter.  Engel also channels Biggie Smalls and Tupac like an urban teen, which is as good a spot as any to point out that while most of the “Half Time” humor revolves around the elder cast’s ages, there’s no condescension. These self-deprecating ‘seniors’ are fun to be with, not poked fun at.

De Shields’s memory-dance with a younger ballerina is lovely. A dapper 72, the original “Wiz” has still got it. Lillias White, a mere 66, displays the same vigor that earned her the 1997 Featured Musical Actress Tony Award for “The Life.” 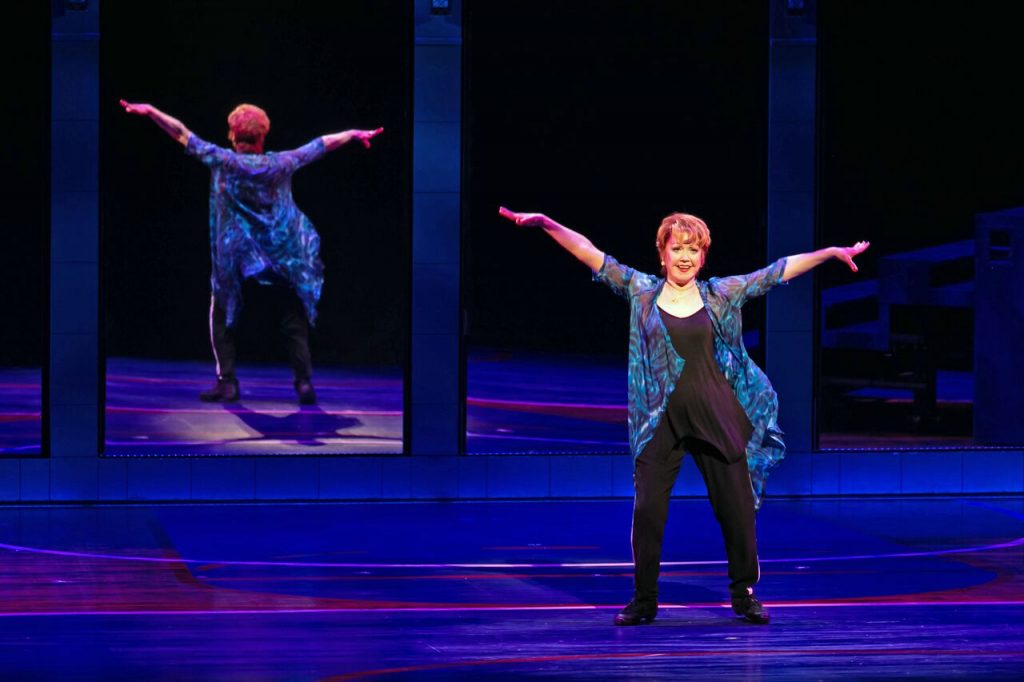 All Donna McKechnie still needs are the music and the mirror!

Casting Donna McKechnie, now75, as a former dancer who laments her faded career and whose song-and-dance number “Too Good for This” is staged in front of a revolving set of mirrors may be a tad obvious (a la Cassie from “A Chorus Line”), but to those of us that welled up over the homage, its only fault was that it ran too short.

So, you’ll figure out early that the elders will turn out just as snappy as the decades-younger cheerleaders and their former leader Tara, who “aged-out” at 27 (Tara, that is, not the special Haven Burton, who plays her). Nothing wrong with rooting for the home team, and this one’s a winner.

[As for my revealing their ages, I’m no cad; those ages become their uniform numbers!]