Some other Damon Runyon guys and dolls in “Three Wise Guys”

I am sitting in Jersey Mike’s eating a mini number seven sub when I hear that Stephanie “Stormy” Clifford is suing Donald “Grab ‘Em” Trump.

That sentence is in the present tense, but you can tell it was in the past, right? Context makes it clear, but it is deceptive; writing in the “historical present” does not come easy. Every sentence is a challenge. No writer ever mastered that voice better than did Damon Runyon, to great effect and with absolute clarity. The form takes on a sort of formality, with virtually all dialogue in complete sentences and a near-total absence of contractions (nary a don’t for do not). The argot is known, in fact, as Runyonesque.

Born in 1884, Runyon was a transplanted Kansan who became a sportswriter (for the New York American) after serving in the Spanish-American war, and then a First World War correspondent and columnist for Hearst. He also wrote poetry and in assorted prose forms before zeroing in on the short story. He died in 1946.

Thirty-seven Broadway Stories are included in my Runyon anthology. Two of them, “Dancing Dan’s Christmas” and “The Three Wise Guys” have been adapted and combined by Scott Alan Evans and Jeffrey Couchman for The Actors Company Theatre (TACT) into “Three Wise Guys,” running off-Broadway on Theatre Row through April 14. 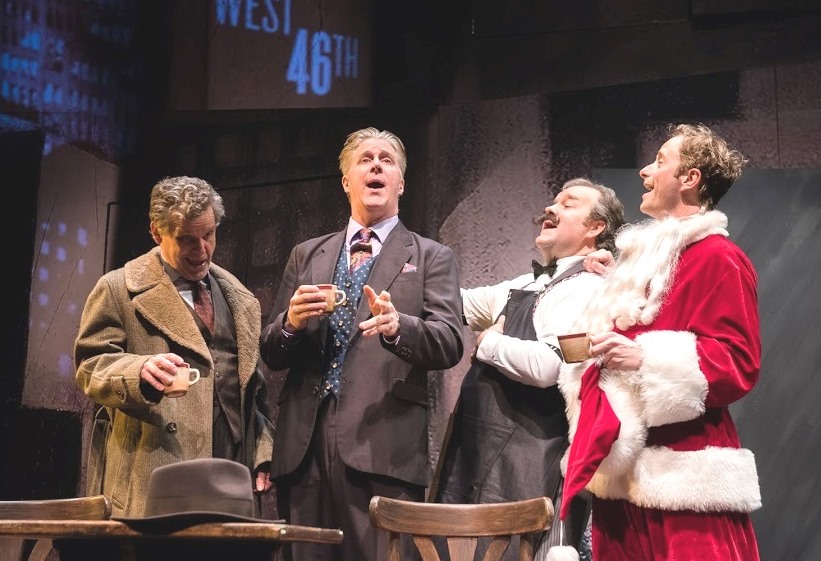 “Dancing Dan” is set on Christmas Eve in Good Time Charley’s (Ron McClary, congenial) speakeasy on West 47th Street, a location within the Times Square blocks where all the stories unfold. Dancing Dan (Jeffrey C. Hawkins, smooth) avoids a confrontation with Heine Schmitz (John Plumpis, tough), who is “all sored up” at Dan over his attentions to Miss Muriel O’Neill (Victoria Mack, delectable) heretofore Heine’s doll, by donning a Santa Claus suit.

They all end up at Mrs. Elizabeth “Bitsy”Albright’s (Dana Smith-Croll, elegant) Long Island soiree (don’t ask how) where [Spoiler alert] Heine hooks up (an admitted anachronism) with Bitsy, while Dancing Dan opens a dance studio in San Francisco with Miss Muriel before the story ends on “Merry Christmas.” 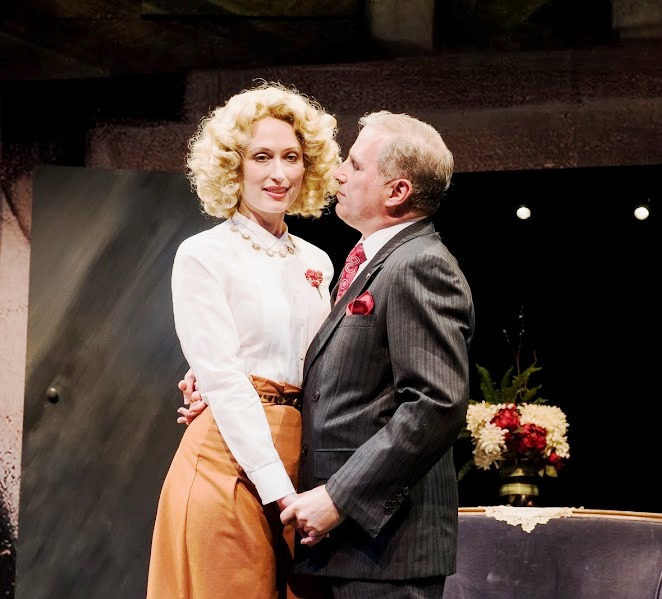 “The Three Wise Guys” story blends tough-guy gangsterism with heart-warming sentiment. Bootlegger Blondy Swanson (Karl Kenzler, suave), The Dutchman (Joel Jones, no-nonsense) and their pal drive to Pennsylvania to recover robbery proceeds that had been stashed in a deserted barn, now, however, occupied by Miss Clarabelle Cobb (Mack, even more-so), whose delicate condition brings out the guys’ best instincts. Runyon’s hoods are more caricatures than “Godfather” gangsters, but he doesn’t stint on the tough-guy stuff. Here their humanity and the story’s wonderful ending are as satisfying as any Christmas special. 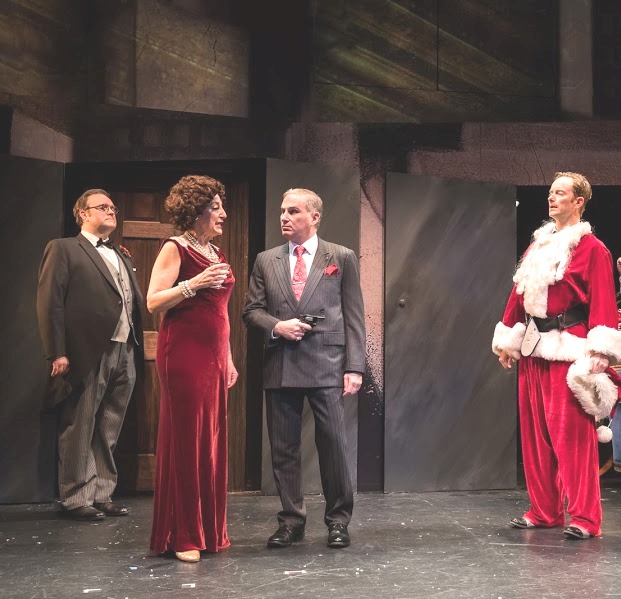 Another characteristic of Runyon’s short stories is the prevalence of something that really bugged my high school English teacher: run-on sentences. Many full-length paragraphs are one long comma-laden sentence.

So lest I leave my readers with an impression of which they would be mistaken, do not infer that I will fail to mention Frankie “Notes” Loesser’s known-to-one-and-all “Guys and Dolls,” which was lifted on the square from Damon Runyon’s “Idyll of Miss Sarah Brown,” in which Miss Sarah becomes Mrs. Obediah “Sky” Masterson by arriving at Nathan Detroit’s crap game in the nick of time to keep The Sky from killing old Brandy Bottle Bates and then, uncharacteristically for a Mission Doll, outplaying Sky with dice that are strictly phony.

Nope, “Three Wise Guys” is not “Guys and Dolls,” but it sure is fun to see and to hear some of Damon Runyon’s lesser-known Times Square denizens lovingly brought to life by the all ’round excellent comapny. Co-adapter Evans has directed with a keen eye and ear for Runyon-speak, now being performed, fittingly enough, on 42nd Street.

Through April 14 at Beckett Theatre, 410 West 42nd Street, NYC. Performances Tues – Fri at 8PM; Sat at 2 and 8; Sun at 3PM with cast talk-backs after every Sunday matinee. For tickets: www.Tactnyc.org