Escape to – or from – Margaritaville: It’s a tossup

In order to enjoy a jukebox musical, it helps to be a fan of the songbook going in, but that’s no guarantee.  ABBA-adoring fans kept “Mamma Mia” running for years on its easily replicated disco score, even with its silly book (story). “Ring of Fire,” on the other hand, bombed, despite its 38 songs associated with Johnny Cash, largely because that show lacked the one ingredient that made those 38 numbers memorable: Johnny Cash. And “Lennon,” featuring John’s music and interview excerpts, opened and closed in six weeks. (Investors in a Lennon bio-musical with a faux fab four must have needed a tax loss.) “Jersey Boys” is an exception to received wisdom; the insider tale of the music industry is well-crafted, with Four Seasons songs for exclamation points.

“Escape to Margaritaville,” which opened last week at the Marquis Theatre in Times Square, is a buffet of twenty-five Jimmy Buffett songs (he wrote both music and lyrics) performed over two acts within a formula romcom about a Caribbean island romance. In tried and true fashion, our leading couple meets cute, hooks up, splits up, and reunites just in time for a curtain call (whew). There’s also the traditional couple number two, who end up together after she sheds her boorish fiancé who guilts her about her weight, which, btw, is normal-range attractive and strong enough to finally deck the loser-guy (to much applause). 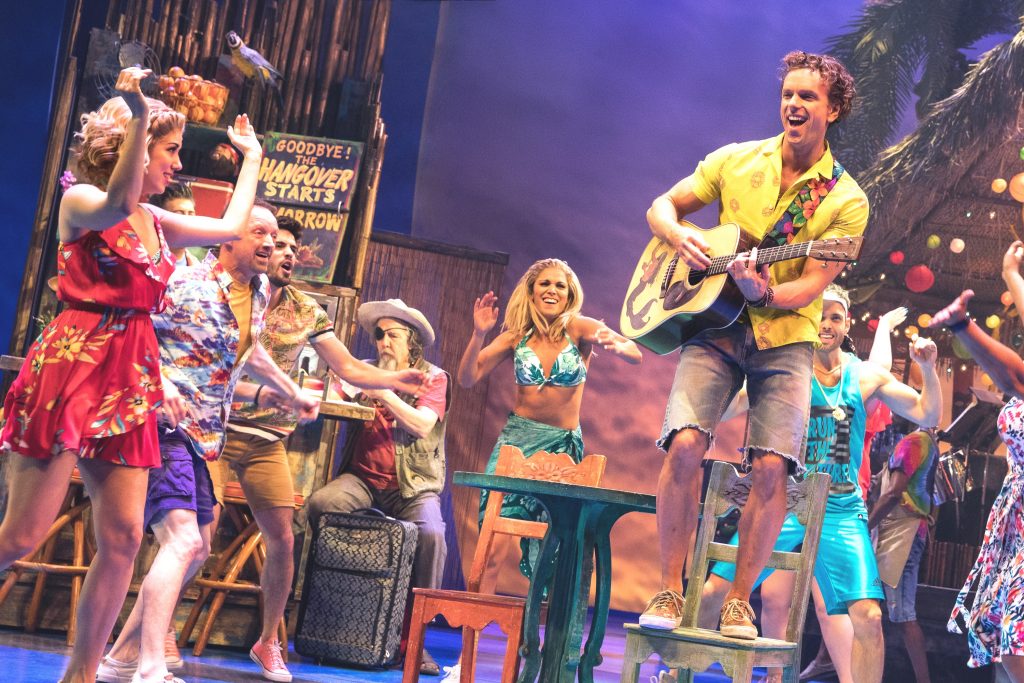 Paul Alexander Nolan and the cast of “Escape To Margaritaville” [Photos: Matthew Murphy]

“Margaritaville” gains a smidgen on other similarly mindless escapism through the winning pairing of those two couples, an energetic and talented singing and dancing ensemble, and the knack of book-writers Greg Garcia and Mike O’Malley to wed the songs to their storyline and vice versa. Set in a Caribbean cabana bar, “It’s Five O’clock Somewhere” is a natural, and the weight-taunting serves as a lead-in to “Cheeseburger in Paradise.”  “It’s My Job,” “Love and Luck” and “”One Particular Harbor” receive similar treatment and while they all sound vaguely alike (and undistinguished) to me, the sporadic audience singalong attests to the prevalence of  Jimmy Buffett fandom.

As the musician/singer whose career goes from beach-bar to super-star in act two (why not?) Paul Alexander Nolan displays a fine set of pipes – and abs. He and Alison Luff, as the academic environmentalist on a one-week vacation, have chemistry as a romantic pair, as do Lisa Howard and Eric Peterson as couple number two. 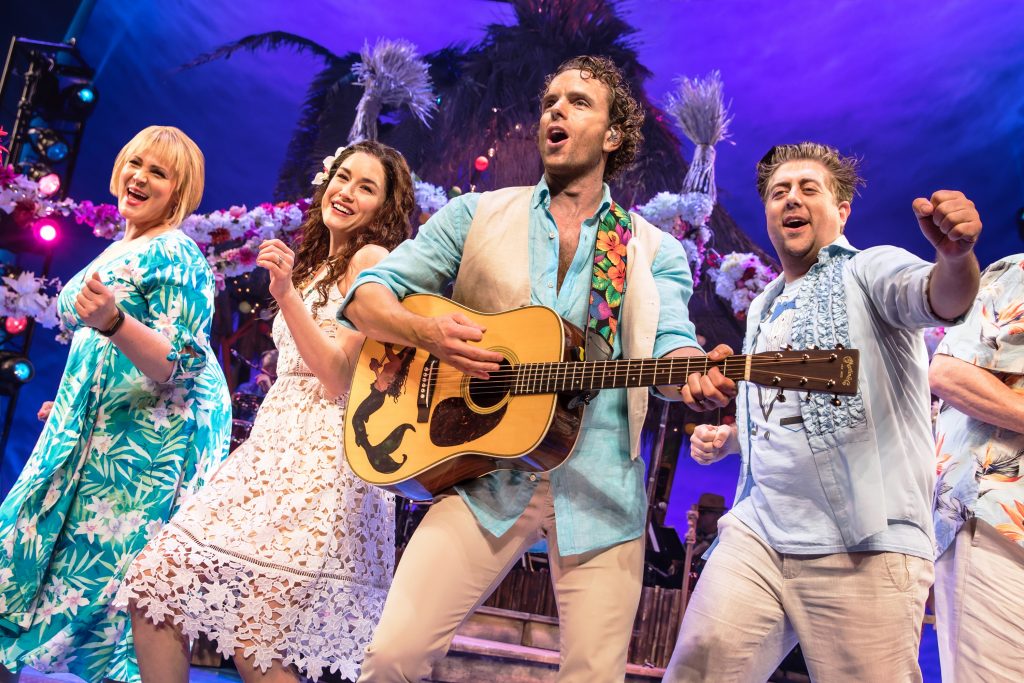 As in other recent musicals, “Margaritaville” features a tap dance number.  In the Jerry Springer Opera it is a group of hooded KKK members. Here, it’s a synchronized line of risen-from-the-dead insurance agents, which I’ll refrain from labeling a redundancy only because I personally labored as one for years. (In “SpongeBob,” four-legged Squidward Q. Tentacles out-taps the KKK and insurance guys put together.)

It’s a cinch that no one is going to “Margaritaville” for the literary content, and you have to wonder if there are enough Parrot Heads to keep the show running. (If you know what a Parrot Head is, you might be one.)  To say I’ve seen worse musicals than “Escape to Margaritaville” is faint praise to be sure. But…I’ve seen worse.

At the Marquis Theatre in the Marriott Marquis Hotel, Times Square at 45th/46th Streets. For Tues – Sun performance schedule: 877-250-2929 or online at www.Ticketmaster.com

[Paul Alexander Nolan’s Playbill bio cites four roles he played at the Stratford Festival in Ontario, all of which I reviewed for Heritage newspapers in Michigan. Especially praiseworthy was his Tony in “West Side Story” in 2009. Coincidentally, that production’s Maria, Chilina Kennedy (they “sparkled” together), is also appearing now on Broadway – as Carole King in “Beautiful.” A hearty welcome to our talented friends from north of the border!]