Don’t get shut out at the gate: put your money on “The Sting”

What do you look for in a musical? Songs and singers that make you glad you have ears? Multi-style choreography and dancers adept at every one of them? How ‘bout a plot that freezes your attention through every scene.  And finally, a charismatic leading man heading up a cast that seems to be enjoying their work as much as you are enjoying them at it.  ‘If only,’ you say? Well “The Sting” is that musical. (And Harry Connick, Jr. is that star.)

The adaptation of the 1973 Oscar-winning movie is World Premiering at Paper Mill Playhouse in Milburn, New Jersey through April 29, and anyone that doubts it is headed for Broadway is reminded that ”Newsies,” “The Bronx Tale” and “Bandstand,” among others, began at Paper Mill. In gambling lingo, “The Sting” is a lock to make that leap.

And gambling lingo is more than appropriate. For those who have not seen “The Sting,” in a cinema or on TCM, it is set in 1936 Chicago, where two con men are putting a “sting” on NYC high-roller Doyle Lonnegan after he has one of their pals killed. The flick was – and remains – notable for the performances of Paul Newman and Robert Redford and for the use of Scott Joplin’s ragtime music in setting the scenes. There is, in fact, an overall musical sensibility to the movie. What took so long? 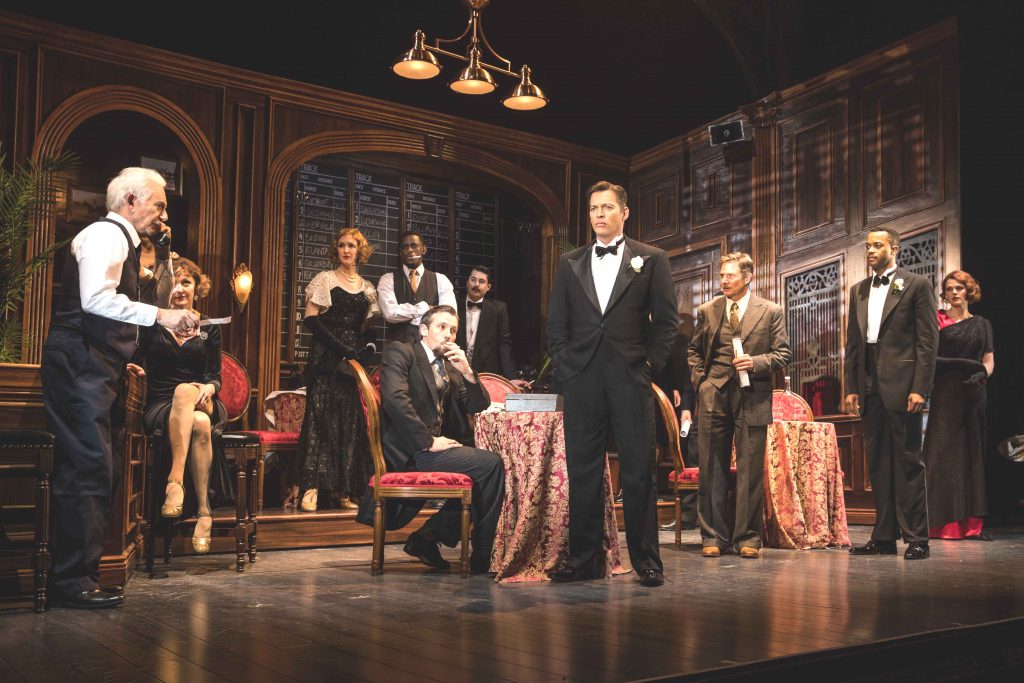 Harry Connick, Jr., center, in the faux betting parlor where The Sting unfolds.

The wait was worth it. With the two leading roles tweaked to good effect (more below), the play retains much of the Great Depression flavor of its source. A direct comparison of the play to the movie is apples and oranges, although they converge in style and, of course, narrative.  Bob Martin’s (“Drowsy Chaperone”) book embraces David S. Ward’s Oscar-winning screenplay economically while including all the intricate ins and outs of the plot. And you need not have seen the movie to appreciate the show. (It does help, though, making it like visiting an old friend.)

The two con artists are updated to fit one established-star performer and one who could be soon enough. Connick, Jr. is a Musical Renaissance man. He’s not Paul Newman (who is?), but he is convincing enough as Henry Gondorff.  Connick sings with cool authority, plays a mean, swinging piano and tap dances up a storm. (Who knew?) He’s also credited with contributing additional music and lyrics to those of Mark Hollmann and Greg Kotis (Tony Award winners for “Urinetown”). Connick also adapted and folded-in the Scott Joplin ragtime underscoring that recalls the film and serves the play so well. 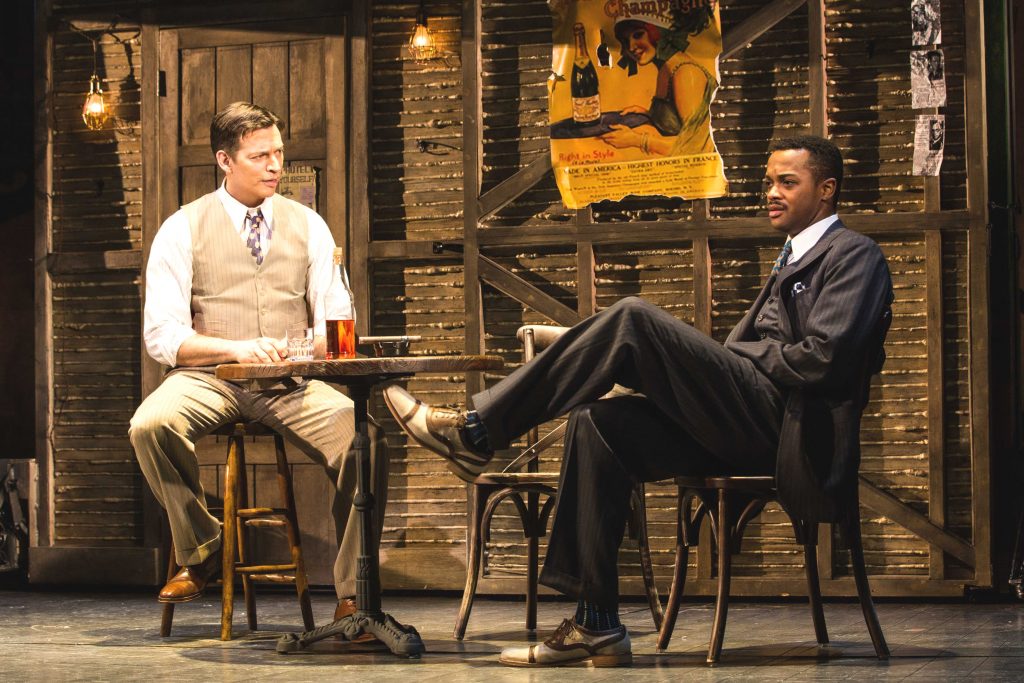 The most significant departure from the movie is the casting of African-American J. Harrison Ghee as Johnny Hooker (the Redford role). Making Hooker black creates an interesting dynamic, considering that Luther (Kevyn Morrow), whose death they are avenging, was black and that Hooker had been his virtual family member. It also adds resonance to a couple of Depression-era blues numbers that Ghee aces, along with briefly re-incarnated Luther and an exquisitely soulful slide-trombone player (Dion Tucker).

[In an early exchange, Gondorff asks Hooker why he’s so intent on conning Lonnegan. “Because I don’t know enough about killing to kill him.” Nifty line.]

Aficionados of the movie (I am one) will be amused by the casting of some supporting roles, which bear a more-than-coincidental resemblance to their on-screen predecessors, in appearance and even in vocal timbre. Tom Hewitt’s replication of Robert Shaw’s quirky accent as Doyle Lonnegan is more homage than imitation.

As accomplice Kid Twist, Robert Kline could pass for the movie’s Harold Gould, and while Christopher Gurr looks a little like Ray Walston, his staccato broadcasting of the past-post race results is a dead-on sound-alike. Peter Benson channels the lesser-known Jack Kehoe as The Erie Kid, who sports a bandage across his Lonnegan-shattered nose. That Kate Shindle resembles Eileen Brennan as Billie, Gondorff’s on-again, off-again girlfriend, has mostly to do with a 1936-style makeover, but Ms. Shindle is very much her own actor and singer in the role, which is expanded from the film (in one shocking way, not revealed here). 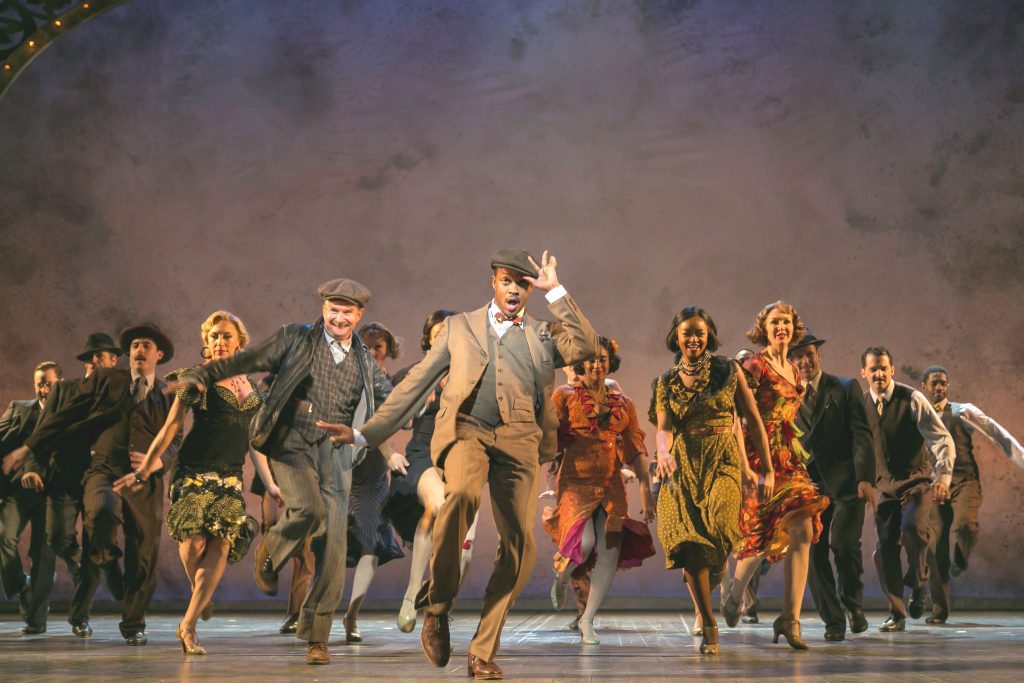 J. Harrisin Ghee, front and center, in one of the show’s rousing song-and-dance numbers

Warren Carlyle’s choreography tests the athleticism of the ensemble, which passes with flying colors. Coordinated tap-dancing is used throughout for added percussion; both acts feature terrific extended numbers, including a cop-chase tap sequence up-and-down a moveable staircase that stops the show.

My enthusiasm for “The Sting” does not blind me to its few shortcomings; Paper Mill’s is a trial run, after all, although many a finished product would give its electronic keyboard to be as polished. The poker-game scene could lose a few minutes (and probably will), and the convoluted sting set-up might puzzle some audience members. Director John Rando’s track record includes the recent “Jerry Springer Opera” and “On the Town,” as well as the afore-mentioned “Urinetown,” for which he won the directing Tony.

So “The Sting” is in good hands. See it and you’ll put yours together for it.  It’s a lock.