When I commented to Holmdel Theatre Company’s  “Much Ado About Nothing” producer that I did not recognize any cast names (except hers) from prior community productions, she explained that many of the ‘usual suspects’ shun Shakespeare auditions. Rehearsal periods are usually longer by a week or more, as well as by hours, and memorization can be a tough go for people with families and day-jobs. It’s not that they’re scared of the material, just leery of the commitment.

Conversely, some candidates show up because it is Shakespeare.  While mostly New Jersey based, a majority of the cast (of 17) are Holmdel first-timers. Others are area high school students, a talent source that the Company accesses regularly (to their credit). “Much Ado About Nothing” is not the easiest Shakespearean comedy to bring off successfully. It’s not fanciful like “Midsummer Night’s Dream” or joked-up like “A Comedy of Errors.”  Unlike those, “Much Ado” doesn’t wear its comedy on its sleeve. It has an unrepentant villain and serious obstacles to its happy ending. 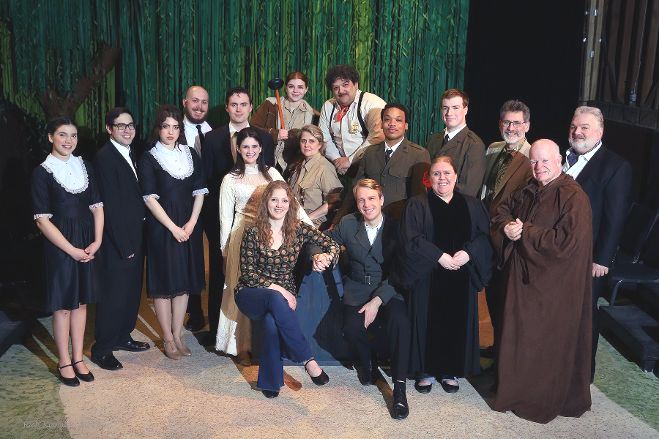 The cast of Holmdel Theatre Company’s “Much Ado About Nothing”

“Much Ado” being three-quarters prose (as opposed to verse)  eases the burden somewhat, but if among the Holmdel cast there was trepidation over the Elizabethan construction or the memorization thereof, it was not in evidence on opening night. Despite extraneous pauses-for-effect that elongate the evening, the result is accessible Shakespeare. (Anyone who considers ‘accessible’ a dismissive comment has not sat through much muddled Shakespeare.)

Shakespeare set the play in 1600-something Sicily, in the household of Governor Leonato of Messina. Here it is moved to Messina, New York (who knew?) in 1968, which has little effect on the play besides its costuming, although the stark décor and absence of set pieces (save one bench) does not enhance eye appeal. 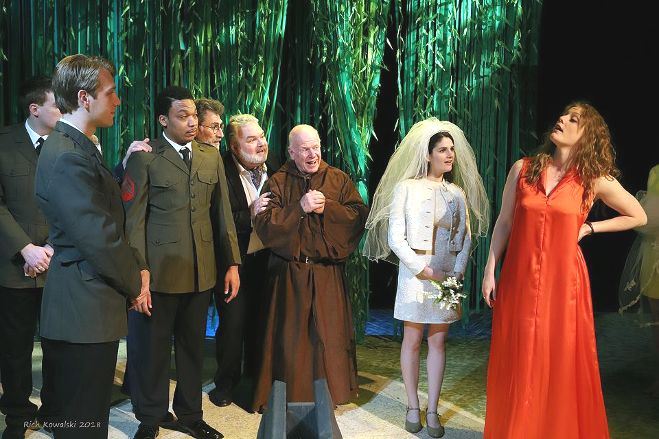 The bulk of the play concerns Hero and Claudio’s march to the altar, nearly sabotaged by jealous Don John’s nefarious scheming, which involves conspirators who are eventually undone by bumbling Constable Dogberry and his comically inept deputies. But it is the smart, caustic relationship between Beatrice and Benedick that has come to represent the play, so much so that their names have served as an alternate title. (Hector Berlioz’s 1861 opera is actually entitled Béatrice et Bénédicte.)

There’s no doubt that B and B are meant for each other, but not before they overcome their mutual aversion to the state of matrimony. “That a woman conceived me, I thank her,” says Benedick. “But I will live a bachelor.” And Beatrice would “rather hear my dog bark at a crow than a man swear he loves me.” (Spoiler: They both cave.) Weeks is a fine Benedick, handsome and quick-witted, but like many another Benedick, he plays by Beatrice’s rules. Ms. Ammerman is well cast; she has the self-possessed bearing and hint of glamour that would win over any Benedick. Her Beatrice is saucy, not coy, and strong, not overbearing. Lapsing in and out of a cultured Downton Abbey accent is distracting, and her costume changes might be appropriate in some other play. I counted five (not all flattering); no one else has more than two.

She is, at any rate, an audience favorite, and while drawing parallels between Shakespeare and the present day is old news, darned if Beatrice’s refusal to be treated as chattel doesn’t bring to mind the #MeToo movement – and Southwest Airlines Captain Tammie Jo Shults.

Concentrating on Bea and Ben does not diminish the work of other Holmdel actors. Williams and Colagrande are a believable pair of young lovers. We root for them. Others who impress include Mark Zebro as Borachio, Don John’s enforcer, who wraps things up by coming clean near the end. Rupert Ravens is an amusing Dogberry, but his (and others’) mid-speech ruminations are out of character. Shakespeare doesn’t need much scenery; the text makes locations clear, but dead-air pauses on an empty stage are just that. Holmdel producer Laurie Devino adds to her string of impressive cameo appearances with Verges, Dogberry’s deputy. (Mirrored glasses are scary.) 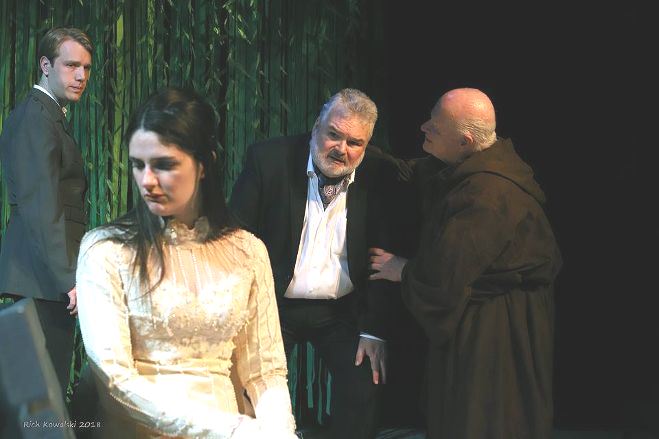 Perky high schooler Bella Ashton is very good in a couple of supporting roles, as is Julia Lupi as Ursula, Hero’s attendant, who conspires with her mistress and with Margaret (Jessica Freeland), another attendant, to trick Beatrice into believing that Benedick loves her. That scene and a similar trick on Benedick are slapsticky, with Bea and Ben both crawling around the floor and under the bench. It is out of character, but at least they both do it.

Those bits noted, director Tom Frascatore has kept the play free of gimmicks. Relationships are established, plot points are made, resolutions are natural. And kudos to him for finessing the scene where Claudio has been known to strike Hero. His anger toward her is still there, but wailing on her would be cringeworthy.

This is the fourth Shakespeare I have seen at Holmdel; good for them. I look forward to the fifth – and hope some of these same strolling players show up to audition.