Two plays, two women, one each. “In the Body of the World” and “Wild Horses”

It takes more than memorization to put across a solo play (although that element should not be minimized). Those sometimes deceptively crowded affairs require the establishing of unique personal connections to the audience and, in most, the enacting of multiple characters through variations of voice and demeanor in such a way that leaves no doubt as to who is whom when. High profile Broadway outings this season have included John Lithgow’s “Stories By Heart” and John Leguizamo’s “Latin History for Morons.” (Solo Performance is a category at both Drama Desk and Outer Critics Circle Awards.)

No one has achieved more solo-show recognition than Eve Ensler, primarily for “The Vagina Monologues,” which she wrote and performed solo. (It has morphed into a women’s ensemble piece, not to its detriment.) Ensler’s “In the Body of the World” is now running off-Broadway, while on the Broadway in Long Branch, New Jersey, the resourceful NJ Repertory Company is featuring “Wild Horses,” written by Allison Gregory and performed by Estelle Bajou. Both pieces are also directed by women: “World” by Diane Paulus (“Waitress,” etc. on B’way) and “Horses” by NJ Rep artistic director SuzAnne Barabas. Both actors deserve that memorization shout-out, but it is their rapport with the audience and their evocations of diverse persons (of both sexes) that most impress. 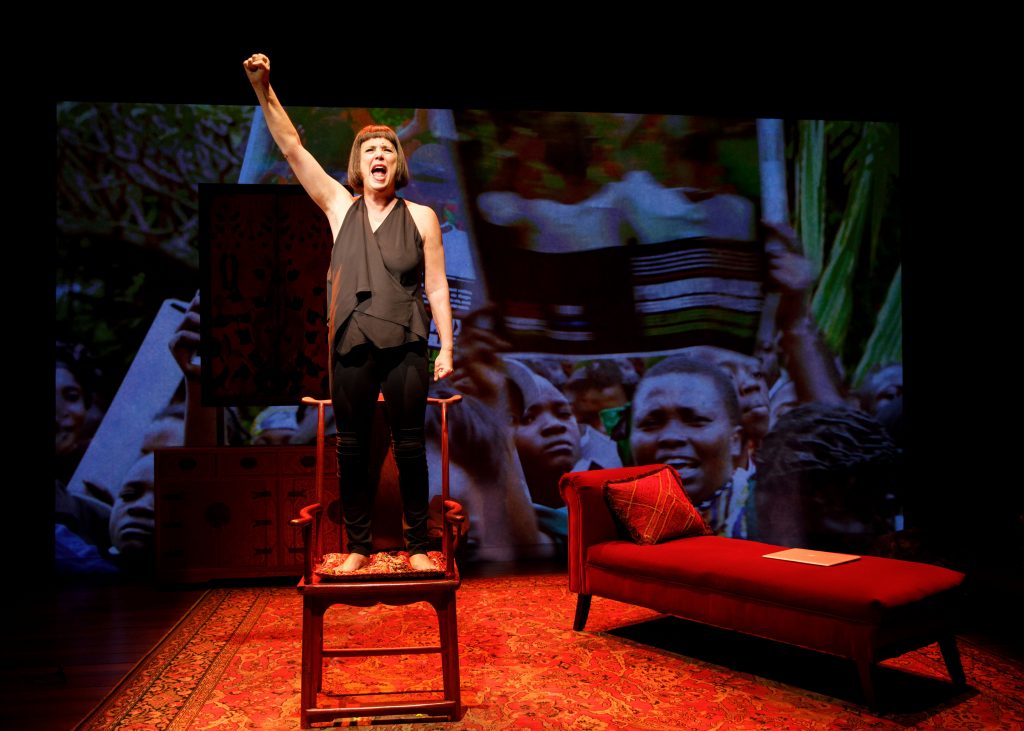 Ms. Ensler’s play is a highly personal rumination on women’s issues, centered on her own battle with uterine cancer. It is neither self-pitying nor an appeal for received pity, although a sad confessional it is in part, and it surely triggers the sympathy gene.

Ensler has long been passionate about the oppression of women – everywhere, but particularly in Africa’s Congo region, where many suffer “unspeakable violence.” (She does speak of it here, in arresting detail.) Spurred by the success of   “The Vagina Monologues,” Ensler founded V-Day and also One Billion Rising, a global effort to end violence against women in more than 200 countries. “World” centers on her personal diagnosis and treatment, but she expands the exploration of her affected body parts, her body of the world, into coverage of wider – and instructive – women’s issues.

Some of “World” is not easy to take. If, like me, you are averse to hearing details of someone’s medical symptoms, their surgical procedures and after-effects, there will be some trepidation going in. But Ensler’s factual and brisk recitation jolts the senses, not the stomach. In a Why not? manner, she’s also pretty funny about it, and winningly self-deprecating. (Upon learning that her vagina would be undergoing radiation: “Do you know who I am?”) Backed by gorgeous environmentally themed projections, Eve Ensler commands the stage. “In the Body of the World” is alternately wrenching, lyrical, angry, funny and, throughout, highly personal and literate.

There are no similarly weighty issues in “Wild Horses,” which is more a reminiscence than a memoir. In NJ Rep’s “rolling world premier” (several simultaneous openings nationwide), Woman (Girl in flashbacks) recounts an episode from the twenty-year ago summer when she was thirteen. Unsurprisingly, there are examples of rebellion – against parental (and outside) authority and against the pressures of adolescent insecurity, set to a background of 1960s and 70s juke box favorites. 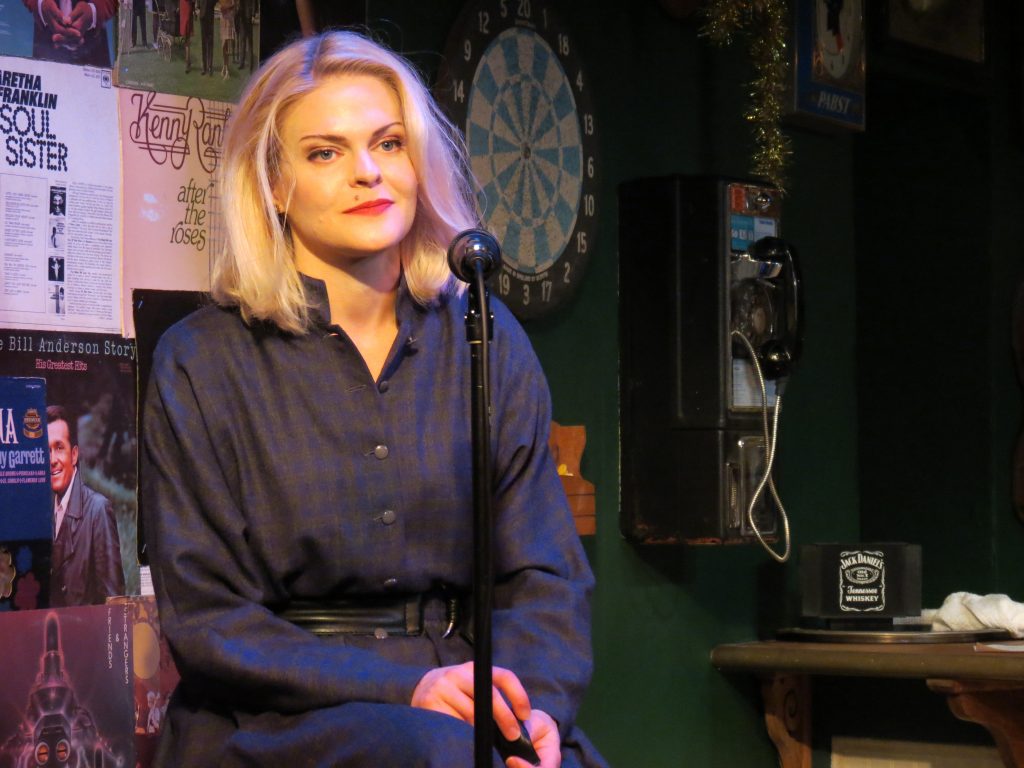 The plot thread about freeing penned-up horses from captivity is no less effective for being an obvious metaphor for the pent-up young characters, and Estelle Bajou is particularly effective at evoking the voices and attitudes of Girl’s angsty cohort. Remember the sense of indestructibility that lingered until sometime between middle school and real life? That universal passage of youth permeates “Wild Horses.”

As she has exhibited before, director Barabas has a knowing way with female actors and characters. Gregory’s play is fragile. In at least this rolling premiere, it is handled with care.

While no one other than Woman/Girl has any lines, the playwright-decreed set is “a room where people are gathered…a bar or a food court” with an “ambient buzz” of conversation, illustrating the passage of twenty years since it was a Tastee Freeze. The point is well made, but NJ Rep doubles down, turning it into a Karaoke bar…on an amateur performance night no less. It’s harmless enough, but you really have to be a fan. (Unfortunately, it’s not a real bar.) Early-arrival is optional, however, and Ms. Bajou’s sensitive performance in the reflective “Wild Horses” begins when the sing-in is over.