A Pulitzer Prize-winning piece by Thornton Wilder opens with no curtain, no scenery. Presently an actor enters and addresses the audience. He names the play and who wrote it. He sets the locale and the precise day-date and outlines the enactment to follow. He tells a bit about the characters that will populate the play, including that he himself will appear later as a character; then the play unfolds on a mostly bare stage with minimal furniture and props.

Sound familiar? It should, but it isn’t. It’s not “Our Town,” but a version of Wilder’s 1928 Pulitzer novel “The Bridge of San Luis Rey,” adapted for the stage by David Greenspan, who also plays the Stage Manager…oops, the Narrator, and a character in the ninety-minute one-act, world-premiering through March 18 at Two River Theater in Red Bank NJ.. 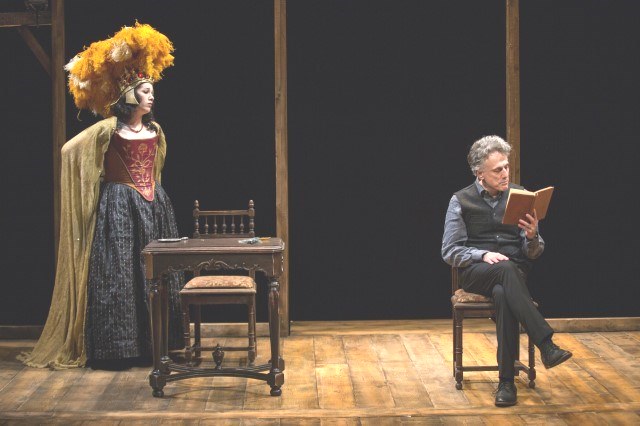 Greenspan’s intro begins as does the novel, bluntly: “On Friday noon, July the twentieth, 1714, the finest bridge in all Peru broke and precipitated five travelers into the gulf below.” The collapse of the span deeply affected everyone, it continues, including the Franciscan missionary Brother Juniper, who had stopped to mop his brow, delaying his entrance onto the bridge by a fortuitous few minutes. Seeing the collapse as “a sheer Act of God” (not human error), he spent six years trying to determine why God had settled upon those persons on that particular day. Brother J reasoned that regardless of apparent randomness, everything – even the accidental collapse of a bridge – has a divine purpose. The novel’s ensuing chapters reveal what he discovered about the five doomed individuals, whose lives had crossed to one degree or another. Renowned Peruvian actress Camila Perichole (Elizabeth Ramos) is the common thread with whom they had all interacted.

It is difficult to reconcile experiencing the novel, which I read for the first time two weeks ago, with Greenspan’s version, a sort of plot-and-character highlight reel. The bitter, aging Marquesa Dona Maria (Mary Lou Rosato), estranged from her daughter Dona Clara (Madeline Wise), ‘adopts’ eleven-year-old Pepita (Sumaya Bouhbal) from the convent of Madre Maria (Julienne Hanzelka Kim) to be her helpmate companion. Both are among the victims, as are Camila’s  taskmaster/sponsor Uncle Pio (Greenspan) and Camila’s young son, represented by a puppet, whose custody Pio had assumed during a stressful period in Camila’s life. (Two River has a history of including puppets in Thornton Wilder works. This one works fine.) 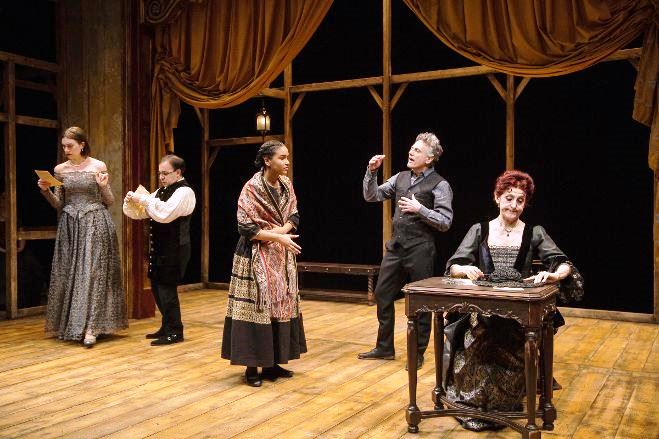 Zachary Infante and Bradley James Tejada play twins, who had been found in a basket and taken in at Dona Maria’s convent. Even as young men, their names were not useful to them, Wilder tells us, “for no one ever succeeded in telling the boys apart.” (We suspend disbelief for Shakespeare’s twins, so why not here?) Both of them perish, although one from a cause other than the bridge collapse.

Steven Rattazzi plays five supporting roles with smooth efficiency, at one point changing hats, literally, mid-scene. He is amusing without mockery. Refreshingly so. 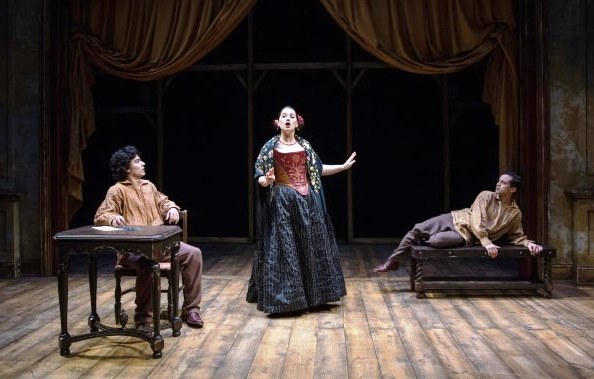 The final chapter begins “A new bridge of stone has been built in the place of the old…,” and if by then you are thinking that the story is historically true, you are not alone. (There was a so-named bridge in Peru, but no record of it collapsing.) The novel’s specific details of time and place, its seemingly fact-based presentation and the absence of hyperbole create a feeling of veracity, a technique at which Wilder excelled. (Not just here; in the 1940s, people sought out old copies of the Grover’s Corner Sentinel.)

Some of Greenspan’s dialogue is in rhyme, both internal and couplets, which is abandoned halfway through (or my ear became attuned). Dona Maria, nodding off during a performance by Camila, says “The acting is fake/I can hardly stay awake,” a dangerous line for a playwright (or adapter) to include. It is safe enough, though, at Two River, where, within the limits of the material, the acting is fine. Relationships and plot points are necessarily condensed, affording scant opportunity for the actors to delve deeply into character, although director Ken Rus Schmoll keeps them in the same period style (Mr. Greenspan’s breeziness excepted).

While designer Antje Ellermann’s set is minimal, the abstract skeletal frames that flank the stage do  evoke a bridge-like structure, and the simple, ground-level effect of the collapse is effective.

Thornton Wilder remains the only Pulitzer awardee in both Literature, for “The Bridge of San Luis Rey” in 1928, and twice in Drama, for “Our Town” in 1938 and for “The Skin of Our Teeth” in ’43. His writings are among the finest-ever in both categories and it is safe to say he knew the difference. This adaptation was apparently sanctioned by the Wilder estate, now overseen by his nephew. (Wilder died in 1975.) In an Afterword to the 1986 Harper Collins edition, that nephew noted that the author had denied the many requests to adapt the work as a play, musical or opera. According to the nephew, Wilder “did not believe that the nuances of the novel’s language could be captured in a live dramatized form.” David Greenspan’s effort is an honorable one, but Uncle Thornton was right.

At the memorial service in New York for British victims of the 9/11 World Trade Center attack, British Prime Minister Tony Blair read aloud the closing sentences of  “The Bridge of San Luis Rey”:

“… Even memory is not necessary for love. There is a land of the living and the land of the dead and the bridge is love, the only survival, the only meaning.”