My exposure to the Jerry Springer Show has been limited to an occasional YouTube clip, but I’ve seen enough to know that the following topics are representative: “My mom used to be my dad – snip, snip” and “I was jilted by a lesbian…dwarf…yum yum” and “I used to be a lap-dancing pre-operative transsexual.”

One thing to know about The New Group’s “Jerry Springer – The Opera,” running through March 11 at the The Pershing Square Signature Center on West 42nd Street, is that those are lyrics from the opening number, sung by a dozen faux audience members  – and cleaned up for inclusion here!

Another thing to know is that the show really is operatic in form…mostly sung, with limited spoken dialogue. It is hardly austere or Grand in subject matter, but it is close in style to what you find some sixty blocks uptown. Even more so, really, than some mainstream sung-throughs. (“Les Mis” comes to mind.) That is, much of the acting is self-conscious, as in so much ‘real’ opera. The difference is that here it is intentional. Half parody, half homage and wholly outrageous in topic and language, it is also devilishly funny. (In fairness to Mr. Gelb’s uptown venue, much of Grand Opera has toned down the histrionics, but still…) With music,lyrics and book by Richard Thomas (not that one) and additional book/lyric input by Stewart Lee, the off-Broadway premiere of the “gleefully profane” musical arives fifteen years after its multi-award-winning run in London.

The first act is a series of interviews with guests representative of the common denominator know as lowest. (Me in disbelief: Could the telecasts be this sleazy? My friend: Oh yes; that’s the appeal.) “I hope there’ll be some fighting,” half of the planted audience sings. “Course there’ll be some fighting, you stupid a……,” the other half responds. And then the first guest-with-a-guilty-secret is introduced: Dwight, who is is engaged to Peaches but has been seeing her best friend Zandra. Both women, hardly runway-model types, confront Dwight and there is, indeed, fighting. And coarse language, which, while I could print it here, I’ll just refer to by its initials: A to Z. (Somehow, the extreme vulgarity comes off funny, like “The Book of Mormon”’s irreligious content – of which there’s a ton of here as well.)

Next up is Diaper Man, who jazz scats “Doo…doo…doo…doo…” (I know, right?) Then there’s Shawntel, who wants to be a pole dancer, then Shawntel’s disapproving mother and a violent (and vile) Ku Klux Klan chorus. Then someone gets shot. Then there’s intermission. 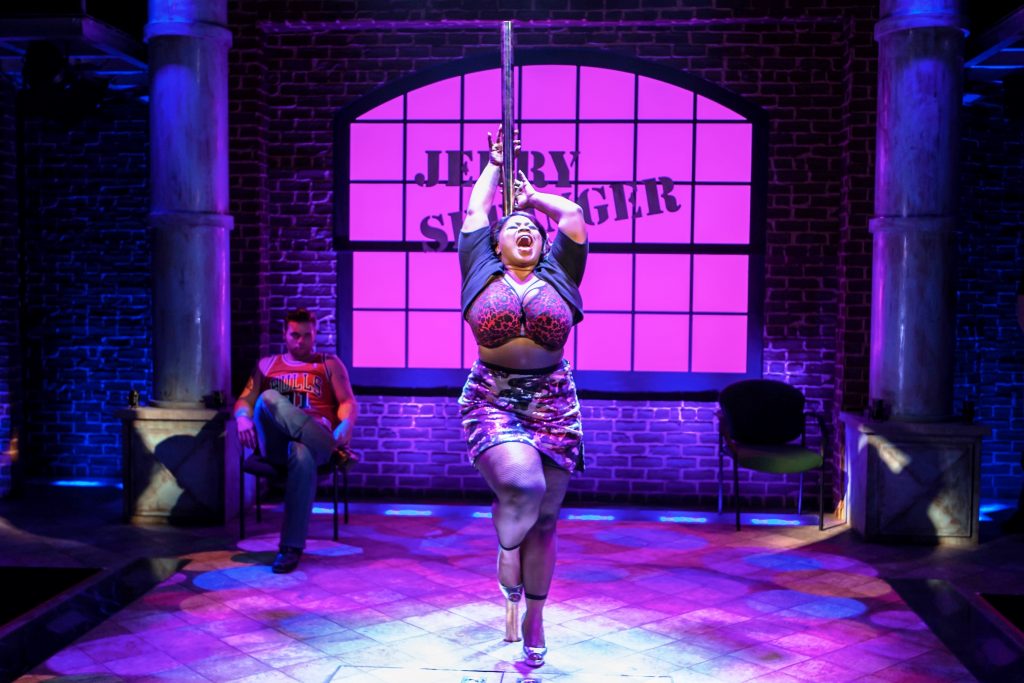 Shawntel (Tiffany Mann) at the pole

Act two has Jerry facing off with Satan in Purgatory in an effort to avoid eternal damnation. (“I can’t be in Purgatory,” Jerry says. “I’m Jewish.”) The ‘plot’ of this half gets convoluted, but the gist is that Satan wants an apology for having been expelled from Heaven and to reconcile with God. “I don’t do…conflict resolution,” Jerry tells him, before agreeing to host a mock Springer show featuring the antagonists, during which the surprise guests include Jesus of Nazareth, Adam and Eve, the “teenage mother of Jesus, Mary,” and, finally, God himself, who is greeted with “Thank God you’re here!”

Among the large cast, Terrence Mann and Will Swenson do some heavy lifting as Jerry and Satan, both with as many spoken as sung passages. Mann, in fact, plays it relatively straight as Jerry, which effectively contrasts with the outrageous “guests.” Most others in the cast do double or triple duty: Tiffany Mann (no apparent relation to Terrence, but who knows) is the gospel-voiced pole dancer and also, later, Eve (of the apple). Luke Grooms is woebegone Dwight and an imposing God. Justin Keyes is the unlikely duo of Diaper Man and Jesus, while Jill Paice sashays throughout as saucy Baby Jane. 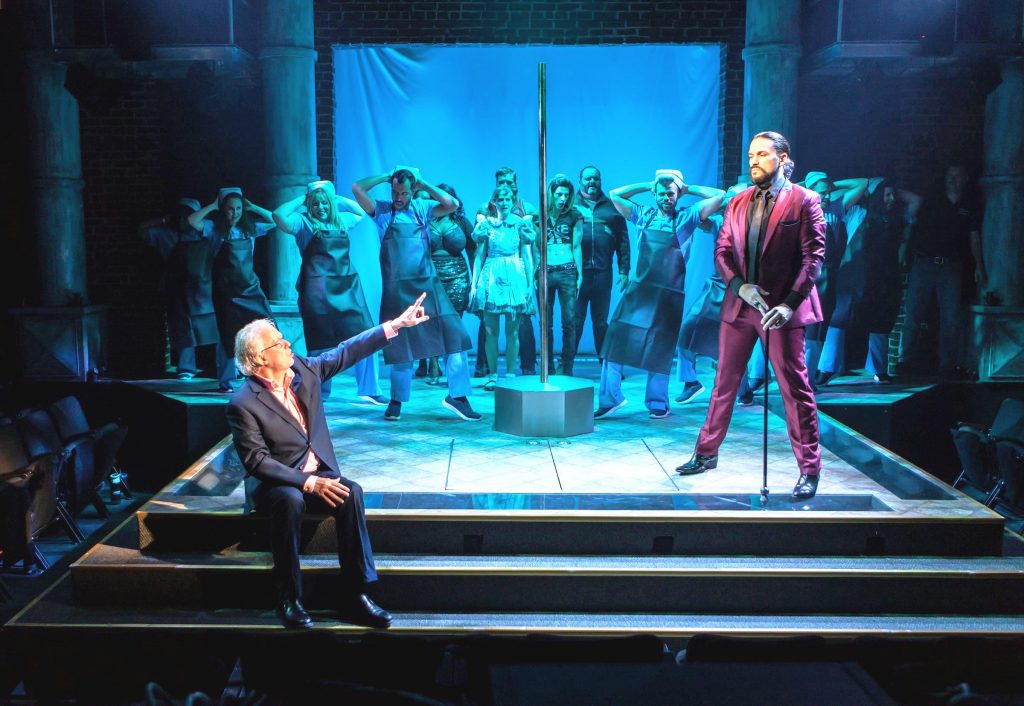 As deceptively rough-hewn as John Rando’s direction and Chris Bailey’s choreography may appear, there’s underlying discipline to both elements, as well as to the orchestrations (Greg Anthony Rassen) and the legit-voice solos and choral work under the music direction of Michael Brennan.

Certainly “Jerry Springer – The Opera” is not for everyone’s taste, and while it might seem over-loaded, the fast-paced show runs just two hours, plus intermission. In the opening song (see top), the audience is advised not to throw things or throw up and “most of all…seriously…have yourselves a good time.” I did not throw things or up, but, seriously, I did have a good time.