As if we needed a reminder about the difference between governing and politicking, along comes “The Outsider,” running through February 18 at Paper Mill Playhouse. The wide chasm that exists between those two concepts is old news (and hardly fake), but Paul Slade Smith’s farcical romp puts a quirky spin on it.

When the governor of an un-named state is forced to retire (the usual reason), his Lieutenant Governor is revealed as a mumbling fumbler. Ned Newley (Lenny Wolpe) appears not only to be incompetent, but also incapable of coherent communication in a public forum, but he is actually a policy wonk with a firm grasp on budgets, infra-structure and other facets of statewide government. The bumbler-cum fiscal whiz is acted to a tee by Wolpe, whose familiar visage has never been more pliable, and it is no surprise that Governor Newley’s brand of governmental accountability eventually triumphs. 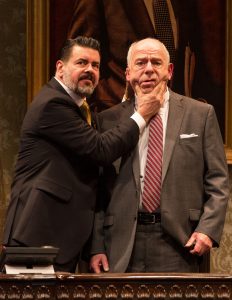 What makes the civics lesson palatable is how deftly written, acted and directed (by David Esbjornson) it is. The climactic mini-lecture is drawn out of Newley in a believable way. What makes the play about more than just that lesson are the characters that surround Newley, especially Louise “LuLu” Peakes, a totally inept office temp, played to a ripe comic turn by Erin Noel Grennan.

The ditsy LuLu becomes a central political figure in spite of herself. She dwells in non-sequitur land, where her out-of-left-field responses place her squarely in the sights of political image-master Arthur Vance (Burke Moses), who grooms her for greater things. LuLu actually conning the electorate might have been a ludicrous over-reach a year or so ago, but today? Not so much. Someone says of LuLu, “She’s got great energy,” which applies twice over to the fiery red-headed Ms. Grennan. 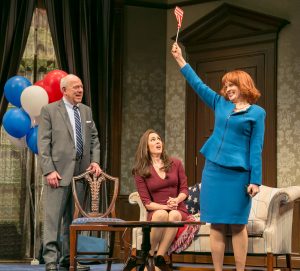 In other roles, Julia Duffy is a pollster with her finger on the public pulse, and Manoel Felciano and Kelley Curran play the Governor’s chief of staff and a TV newswoman, between whom a bland budding romance is chemistry-deprived. Mike Houston stands out as a gruff TV cameraman who becomes the unlikely catalyst for Ned Newley’s emergence from the political-puppet closet.

Mr. Smith’s play is really a live-action sitcom, but buoyed by Mr. Wolpe’s skillful take on the Governor’s dual personas and Ms. Grennan’s scene-stealing (hell, play-stealing) LuLu, “The Outsider” is worth stashing the remote and getting yourself to Paper Mill.

There are heroes and then there are heroes. That seeming incongruity is brought home with searing clarity in Christopher Demos-Brown’s “American Hero,” running through February 25 at George Street Playhouse in New Brunswick. And while its tone is opposite that of “The Outsider,” the two plays share a defining trait: they are both steeped in cynicism. Paper Mill’s play skewers politics with comedy, while “American Hero” takes on the American military establishment. Both plays’ success speaks to the efficacy of Theatre as a message-medium (and to the quality and variety of New Jersey’s Regional stages).

“American Hero” opens with a remarkably vivid battle scene, staged on designer Jason Simms economical set. Upstage of an interior space, it evokes an Iraqi forest-tangle, where, later in the play, the harrowing conflict is enacted in more detail. The scenes depict the heroism from different perspectives: the first one of clear-cut bravery, the second more nuanced – still courageous, to be sure, but colored, if not marred, by surrounding circumstances.

Marine Captain Robert “Rob” Wellman (Armand Schultz) is awarded the Medal of Honor for his actions in that Iraqi encounter. The citation, we learn, carries multiple privileges and a near-mystical aura within the military, prompting those in the vetting process to over-emphasize some of the narrative and omit some, which Rob, after token resistance, signs off on.

The primary omission is that of US Army Corporal Mary Jean Boudreaux, without whose participation there is no Medal…and no play. But there is the fiery Corporal, played with spirit and wit by Laiona Michelle. (Another feature of both plays reviewed here is the dominance of secondary female characters over the plays’ titled males.)

Over the course of a tight 95 minutes we learn much about the outer and inner lives of Rob and Mary, from their battlefield bond to their post-Iraq trajectories – his upbeat on the surface, despite being wheelchair-bound, and hers a downward spiral exacerbated by her being female, African-American and a lesbian: a triple whammy. 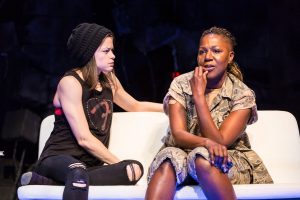 Rob treats his 17-year old daughter Shawn like one of his underling leathernecks, some of whom could probably not do twenty push-ups as efficiently as Kally Duling does in her excellent performance. (“Quick twenty before you go,” Rob commands Shawn.) Scenes between Mary and Shawn, one upon meeting and then later sharing intimacies (and a doobie) are both heart-warming and amusing.

John Bolger plays eight roles, including the U.S President, some supercilious Marine officers and a beat cop. While we know it’s the same actor, each character is a distinct individual, a credit both to Bolger and playwright Demos-Brown. Significantly also, Schultz adjusts Rob’s relationships with each of the eight in a multi-faceted performance. Medal of Honor recipient Captain Robert Wellman is a sympathetic character. Or is he?

Through February 25 at George Street Playhouse’s temporary home (while a downtown New Brunswick PAC is being built) on the Cook Campus of Rutgers University. For directions, performance schedule and to purchase tickets, go to: www.GeorgeStreetPlayhouse.org