It may be a tad unfair to begin a review of Ensemble for the Romantic Century’s serious play “Mary Shelley’s Frankenstein” by recalling the most irreverent take ever on Mary’s creation, but the blind man’s cane-tapping entrance in act one conjured up a vision of Gene Hackman igniting Peter Boyle’s thumb in Mel Brooks’s movie “Young Frankenstein.” My barely stifled chuckle stood out against the dark and stormy nature of the play, which is as much about Ms. Shelley’s creative process as it is about the work itself. It is, in fact, a story within a story, enhanced by classical compositions and evocative choreography.

The compositions are those of Franz Lizst, Franz Schubert, and Johann Sebastian Bach. The choreography is devised by Robert Fairchild, who also executes it as The Monster. 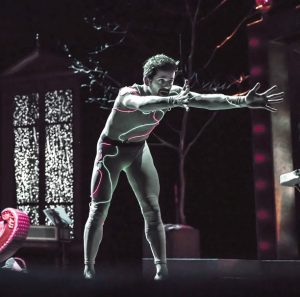 Playwright Eve Wolf’s concept – conflating Mary Shelley’s state of mind with the tale she wrote – is not aided by Donald R. Sanders’s direction, which muddies the lines between the two facets. The play opens with a surge of organ music reminiscent of a Bela Lugosi movie intro. We then see Mary (Mia Vallet) waking from a dream in which she envisions The Monster that she goes on to create in a horror-story contest with her husband Percy Bysshe Shelley, Lord Byron and Byron’s mistress during a storm. The back-and-forth between the state of Mary’s mind and of her fictional creation leaves both threads unfulfilled.

Fairchild’s periodic spasmodic writhing, while faithful in part to Shelley’s description, is nonetheless distracting. Also, as my companion observed, Fairchild’s own appearance works against Ms. Shelley’s tale. Despite some ungainly writhing and unruly behavior, the dancer-actor is hardly “of monstrous size and dreadful appearance,” nor does he act so. When The Monster is repulsed by his reflection in a pool of water (creatively imagined on Vanessa James’ set by Beverly Emmons’ lighting), the projected reflection is a blow-up of Fairchild’s face, cringe-worthy only if you are frightened by preternatural handsomeness.

[Fairchild retired as Principal Dancer with New York City Ballet to pursue a career in musical theater, garnering a Tony Award nomination (and Drama Desk win) in his 2015 Broadway debut “An American in Paris.” He was last seen as Will Parker in “Oklahoma” at London’s Royal Albert Hall.]

Mary Shelley (Mia Vallet) in the symbolic grasp of her creation

Somewhere in there is a straight play about Mary, whose scandalous elopement with the already-married poet Percy and his later drowning during a storm, not to mention her tragic losses of two infants and a toddler, could fill a mini-series.

Overall, projection designer David Bengali’s handiwork is very impressive, evoking eerie landscapes, storms and a chilling and menacing atmosphere barely matched by the context. The digital art, complemented by the live-performed classical music, creates a mesmerizing effect and would, in fact, be a satisfying hour-long concert event. At two hours, however (including intermission), “Mary Shelley’s Frankenstein” is in limbo somewhere among the worlds of Theatre, Ballet and Concert. Until that Mary Shelley bio play appears, I’ll stick with Gene Wilder, Marty Feldman et al.

Through Jan 6 at Pershing Square Signature Center, West 42nd Street, NYC. For schedule and tickets: 212-279-4200 and online at www.romanticcentury.org